Sainsbury’s profits have dropped by 39 per cent despite the company seeing a strong boost in sales thanks to its position as an essential retailer during the pandemic.

The supermarket giant’s Covid bill has now hit £485million and, along with a major restructuring that saw 1,150 jobs affected, means the business suffered a £261million loss last year.

The group declined business rates relief offered by the government worth about £410million.

Sales in the year to March 6 jumped 7.8 per cent, including an 8.3 per cent rise in non-food business as shoppers were unable to head to non-essential retailers for large parts of the year.

Sainsbury’s grocery sales were up 7.8 per cent, helped along by a soaring 120 per cent rise in online orders.

At the company’s Argos business, sales jumped 10.9 per cent, including a 68 per cent rise in digital sales. 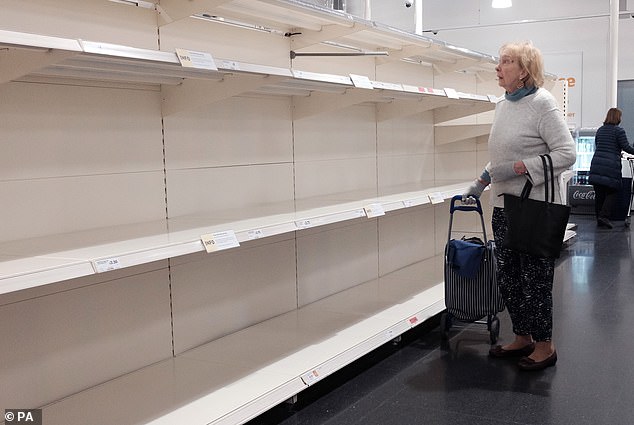 Sainsbury’s grocery sales were up 7.8 per cent. Pictured: empty shelves in London Sainsbury’s

But less travelling meant Sainsbury’s fuel sales slumped 45 per cent contributing to overall revenues hitting £29 billion in the year to March 5, up 0.2 per cent on a year earlier.

Like much of the high street, and despite remaining open throughout the year, clothing sales dropped 8.5 per cent including a 26.7 per cent plunge in the three months between March and May 2020.

Bosses said clothes sales are starting to recover, however, with a 4.2 per cent rise in sales in the past three months.

Chief executive Simon Roberts also revealed that despite the high Covid-19 costs, the supermarket will still pay out a dividend to shareholders of 7.4p a share, up from 7.3p a share a year ago.

He said: ‘This year’s financial results have been heavily influenced by the pandemic. 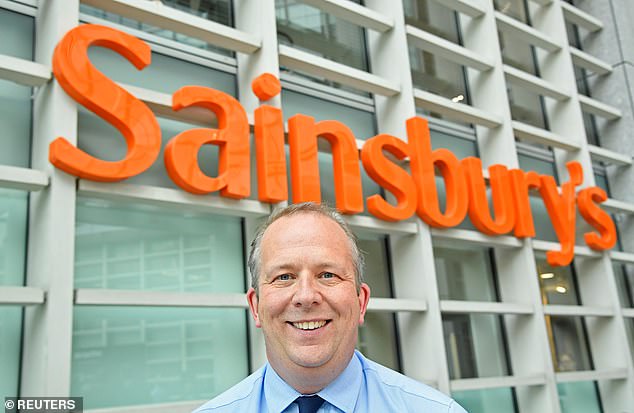 ‘Food and Argos sales are significantly higher, but the cost of keeping colleagues and customers safe during the pandemic has been high.

‘Our full-year direct Covid-19 costs were £485 million, leading to a 39 per cent decrease in full-year underlying profit.

‘We are pleased to propose a full-year dividend which is in line with last year, protecting shareholder income from the full impact of Covid-19 on profits.’

Susannah Streeter, senior investment and markets analyst, of Hargreaves Lansdown, said: ‘J Sainsbury rose to the challenge of helping feed the nation during lockdowns, but the costs of operating through the crisis have seriously dented its bottom line.

‘Redesigning layouts to keep customers and staff safe, paying colleagues in full who needed to shield all added with £485million spent on Covid related costs.

‘Sainsbury also spent £100million on higher staff salaries and special recognition payments to colleagues for their efforts during the crisis, which although a significant outlay, should help with staff retention going forward.’

Sainsbury’s was not alone in seeing Covid-related costs impact its sales.

Earlier this month, Tesco revealed that its profits fell by 20 per cent over the past year after coronavirus costs of almost £900 million offset surging sales.

The supermarket giant announced that pre-tax profits slid to £825 million for the 12 months to February, compared with £1.03 billion the previous year.

It said profits were weighed down by £892 million in Covid-related costs and the company’s decision to hand £585 million in business rates relief back to the Government. 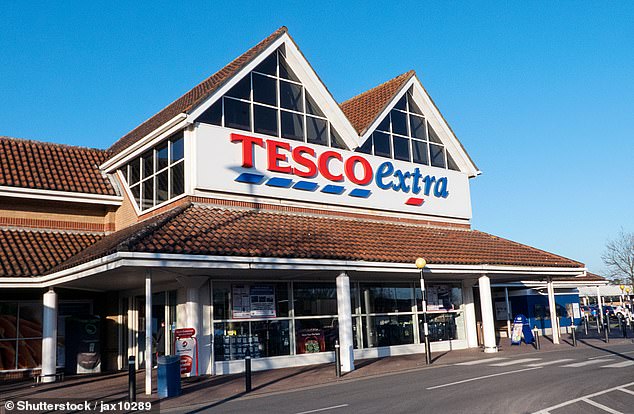 Supermarket giant Tesco earlier this month announced that pre-tax profits slid by 20 per cent to £825 million for the 12 months to February, compared with £1.03 billion the previous year

It had benefited from a jump in demand for groceries during the pandemic, with more meals eaten at home amid restrictions on the hospitality sector and changes to working habits.

Group sales excluding fuel increased by 7 per cent to £53.4 billion for the year, buoyed by soaring online sales.

Online sales jumped by 77 per cent to £6.3 billion in the UK as the company doubled delivery capacity to meet rising demand from housebound customers.

However, the results show the profit from the boost in sales was largely wiped out by extra costs from the pandemic, including millions for staff PPE, social distancing barriers and signage and staff costs.

Kantar grocery data shows households spent around £4,800 in supermarkets over the past 12 months, some £500 more than normal. 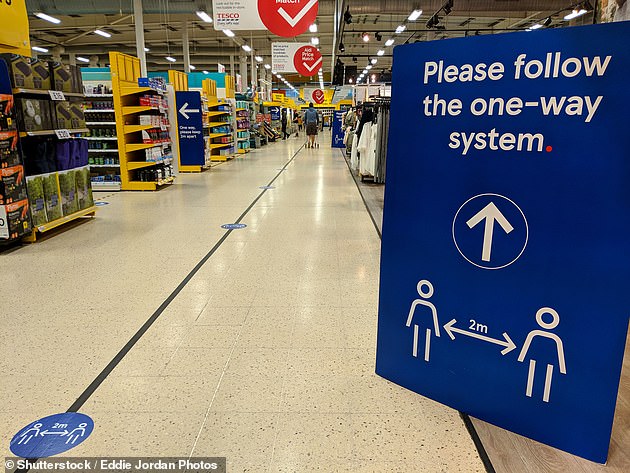 Tesco said profits were weighed down by £892m in Covid costs, including millions spent on social distancing measures and the decision to hand £585m in business rates relief back

Supermarket sales rose by 12.5 per cent in the 12 weeks to February 21 and growth ramped up to 15.1 per cent over the past month in the fastest rate since June 2020.

Tesco emerged as one of the winners of the quarter, notching up its first market share growth since December 2016 as its sales rose to 13.2 per cent.

Morrisons saw sales go up by 13.9 per cent, Sainsbury’s notched up 12.1 per cent growth and Iceland’s sales rose by 23.9 per cent.

Asda was the weakest of the major chains with sales growth of 10.3 per cent.

Supermarkets have been one of the biggest winners during the pandemic, remaining open throughout and enjoying surging sales while ‘non-essential’ retailers flounder.

The High Street has suffered irreversible losses, with non-essential retailers and hospitality venues forced to close for the majority of the past year due to the crisis.

Kantar said nearly a quarter of households bought groceries online during the past month as many customers have switched to shopping from home.

However, following the successful rollout of Britain’s vaccination programme, analysis by Kantar has also shown elderly shoppers are starting to return to stores.