Sainsbury’s is selling bumper sized 2.5kg cans of beans worth £2.10 for just 63p to clear stock it bought during height of coronavirus panic buying

Sainsbury’s has started selling bumper sized 2.5 kg cans of beans for just 63p to clear the stock it bought during the early panic buying days of the pandemic.

The Brakes Beans were originally on sale for £2.10 a can when the supermarket, like rivals, began to bulk buy essentials as they were besieged by shoppers clearing the shelves in March.

With their own brand manufacturing plants facing a shutdown due to the virus, the chains bought catering sized versions of everyday products from companies who usually supply hotels, restaurants and other food service firms.

But as supply problems eased and regular stock reappeared on the shelves, from flour to toilet roll, it left the retailers with store rooms full of the larger versions taking up space they needed for their usual items.

Tesco had a similar problem with huge 16kg bags of flour which they reduced to as little as £1 to get rid of them earlier this month.

Flour became incredibly difficult to find when lockdown first began as Brits took to baking as a means of passing the time in their own homes.

Now Sainsbury’s is doing the same with the Brakes Beans which have been spotted on sale for as little as 63p, said The Grocer.

The industry publication said the plan to stock Brakes jumbo sized cans was originally trialled in 10 stores but then rolled out to 150.

The supermarket chain also stocked giant tins of tomatoes, also from Brakes, in a store in Kent during the height of the pandemic. 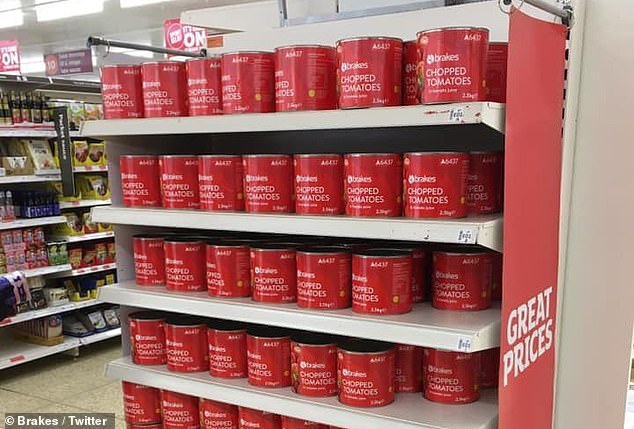 A Sainsbury’s spokesman told the magazine: ‘(We are) reducing the price of Brakes Bros beans but stock is very limited and we don’t expect these prices to be available for long.’

A Brakes spokesman said it was ‘inappropriate for us to comment on what Sainsbury’s does in its stores’ but added: ‘We enjoyed an excellent working relationship with Sainsbury’s throughout the pandemic, providing products that were in very short supply.

‘We were very pleased, as we believe were Sainsbury’s, at how the products performed and the positive consumer reaction.’