Ryan Zinke, United States Secretary of the Interior, sold a 2004 motor home at a steep discount to an old friend in the Montana Legislature in Helena, MT in June.

The 55-year-old, who is currently serving under the Trump administration, sold the Kountry Star Freightliner for half the price of its apparent $50,000 market value.

Lawrence Noble, a senior director of the Campaign Legal Center, a nonpartisan group of election law experts, said: ‘If the asset is worth $50,000, and they sell it to somebody for $25,000 – it’s the equivalent of them giving $25,000 to that person.’

Ryan Zinke, United States Secretary of the Interior, recently sold a 2004 motor home at a steep discount to an old friend in the Montana Legislature in Helena, MT. He sold it for half the price of its apparent $50,000 market value

The treasurer of Zinke’s congressional campaign referred questions about the sale to campaign directors, both of whom declined to comment.

Heather Swift, communications director for the Interior Department who also served as Zinke’s congressional and campaign spokeswoman, did not respond to requests for an interview.

The buyer, state Sen. Ed Buttrey, said the 37-foot (11-meter) recreational vehicle had engine problems and other damage, which would undercut its value. But he still felt he got a ‘nice deal.’

Buttrey maintains there was nothing improper about the transaction. Yet he acknowledged it might prompt questions, especially because he says he’s in the final vetting stages for a key post in Zinke’s Interior Department.

‘I know that wouldn’t look good,’ Buttrey said. The sale was finalized months after Buttrey began spreading word that he was up for an appointment as an assistant interior secretary.

Whether the White House formally nominates Buttrey for the position remains an open question. The White House and Interior Department have declined to comment.

An aide to Montana Sen. Steve Daines, who sits on the committee that would hold a hearing on the nomination, said it was hard to say how much longer the vetting will take. 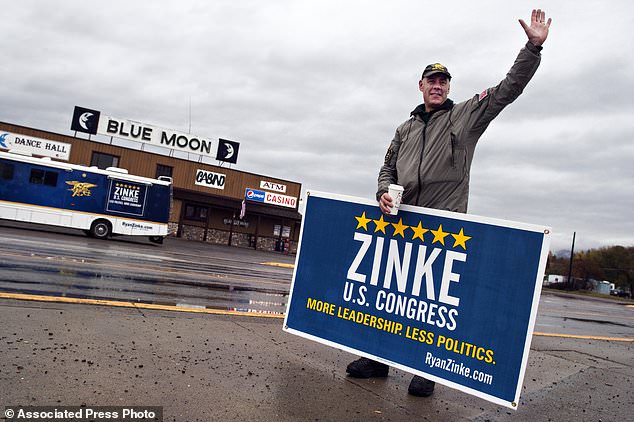 Federal officials have been making the rounds, including visits to state agencies as part of their background checks.

The motor home shuttled Zinke around his home state during a failed bid for lieutenant governor and two successful runs for Montana’s lone congressional seat.

With Zinke now ensconced in Washington, he apparently had no further need for the RV.

Buttrey, a wealthy businessman from Great Falls, said he developed an attachment to vehicle while campaigning with Zinke. So when he was in the market to buy an RV, he said, ‘I made them an offer, and they accepted it.’

Buttrey said he wrote a check for the entire purchase price in June after cashing in some stocks. The title was transferred July 25.

The Associated Press first learned about the vehicle’s sale after inquiring about a $25,000 transaction listed in Zinke’s latest filing with the Federal Election Commission.

The FEC’s rule on the disposal of campaign assets is meant to ensure money raised for politics is used for politics, and ‘not pocketed by the candidate or in this instance pocketed by someone outside the campaign,’ said Paul S. Ryan, vice president of policy and litigation for the watchdog group Common Cause.

He, too, questioned why the campaign gave the state legislator a deep discount, saying ‘it’s easy to be generous to your friends when you’re using other people’s money.’ 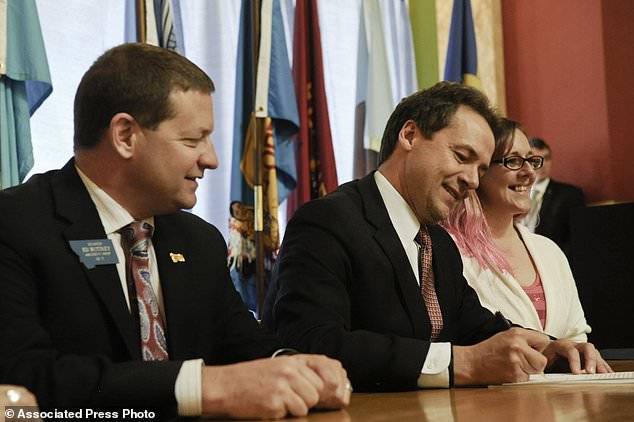 In this photo Democratic Gov. Steve Bullock, center, signs a bill to expand Medicaid, at the Capitol in Helena, Montana, as bill sponsor Republican state Sen. Ed Buttrey sits next to him. Buttrey bought the motorhome from Interior Secretary Ryan Zinke for three political campaigns in June this year

State law prohibits lawmakers from accepting gifts of ‘substantial value,’ defined as $50 or more. But the law suggests there would have to be a demonstrable quid pro quo associated with the gift for it to be a violation. Montana Commissioner of Political Practices Jeff Mangan said he could not comment on the RV sale because there was no complaint before him.

Several RV dealers contacted by the AP said it’s unlikely any repairs to the body or interior of the vehicle – including installing a new refrigerator and television, and repairing awnings and a slide-out compartment – would amount to $25,000. But the dealers said estimating the cost of any repairs would be difficult without an inspection.

Regardless of whether anything improper occurred, both buyer and seller were public officials and should have known the sale would raise eyebrows, said Edwin Bender, executive director of the Helena-based National Institute on Money in State Politics.

‘This is less about the details,’ he said, ‘but more about the optics.’