Salim Hamze, Alameddines: Guildford shooting may have been ‘terrible mistake’

Rival gangland bosses have drawn up a hitlist of Hamze clan targets to execute as the bitter drugs war in Sydney’s west escalates, warn police.

Detective fear several high-profile members of the Hamze family could be next after Wednesday’s brutal double murder of Salim Hamze, 18, and his father Toufik, 64.

They believe Toufik Hamze was an innocent victim caught in the crossfire of the bloody hit, and neighbours said they were sure a ‘terrible mistake’ had been made.

Mr Hamze had lived for years at number 17 on Osgood St in Guildford, literally across the road from the Alameddines at number 18.

Residents in the street insist that, despite the deadly feud between their namesakes, there was never any friction between the two families on Osgood St.

Salim Hamze, 18, is believed to have had a minor association with the underworld conflict with the Alameddine clan. He was brutally executed in broad daylight on Wednesday

Daily Mail Australia understands the Hamze victims were distant relatives of the family at the centre of the underworld conflict, and Toufik was not involved.

‘I think someone has made a terrible mistake,’ said one neighbour. ‘I think there’s been a misunderstanding.

‘Toufik was not related to the gangster Hamzes, They were not from the same family, same village, same part of Lebanon or even the same religion.

‘He had nothing to do with the other Hamzes.’

He added: ‘There was never any trouble between the Hamzes and Alameddines on Osgood Street. They got on well – there was no hint of any trouble.’

Toufik Hamze was hit by a shot to the head in the hail of bullets that cut down his son as they sat in the front of their red Nissan Navara ute outside Toufik’s home.

Police said Salim suffered multiple gunshot wounds and died at the scene while his father was rushed to hospital with a head wound but later died. 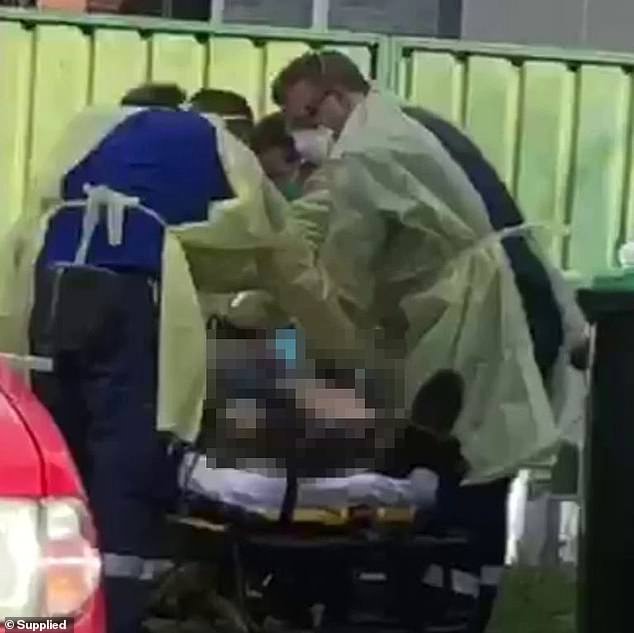 Paramedics desperately tried to revive Toufik before he was raced to Westmead Hospital, where he later died

The shooting is understood to be the latest escalation in the increasingly bloody Sydney underworld feud between the Alameddine and Hamze families.

Police believe Salim was the intended target and his father was collateral damage. Police are unaware of any criminal involvement of the slain father.

The teenager was said to have been warned he was a possible target as a reprisal for a drive-by shooting at Assad Alahmad’s home, brother-in-law of rival crime boss Rafat Alameddine.

Police last month caught Salim with a gun in his car and he admitted he was living in fear of his life after becoming a target for criminal rivals. Salim Hamze, 18, (pictured) and his father Toufik, 64, were found critically injured in the front seat of a red Nissan Navara ute on Osgood St, Guildford shortly before 9am on Wednesday 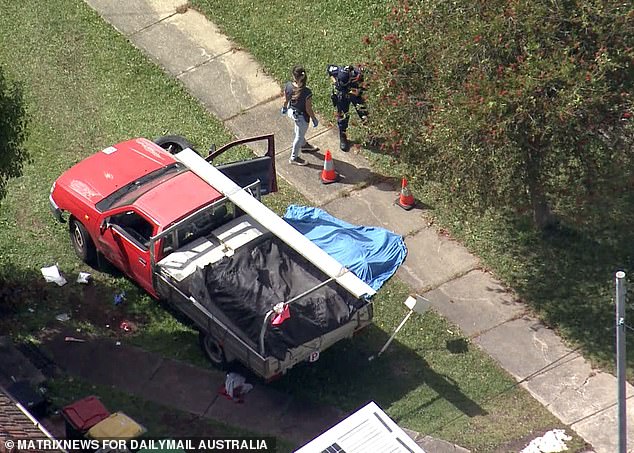 ‘He was known to us as a person who was sometimes under threat and known to be involved in criminal organisations,’ said Detective Chief Superintendent Darren Bennett.

Salim’s lawyer Ahmed Dib said the young teenager knew he was heading down a troubled path and was eager to turn over a new leaf.

Mr Dib said Salim said he came from a good family and ‘he wanted to excel in life in a positive way’.

He told his lawyer he planned to move out of his neighbourhood in southwest Sydney and build a career in construction, like his father.

‘I think it’s absolutely tragic when you have young people who haven’t even begun their lives yet falling victim to what they say is gang-related crime,’ the lawyer told the SMH. 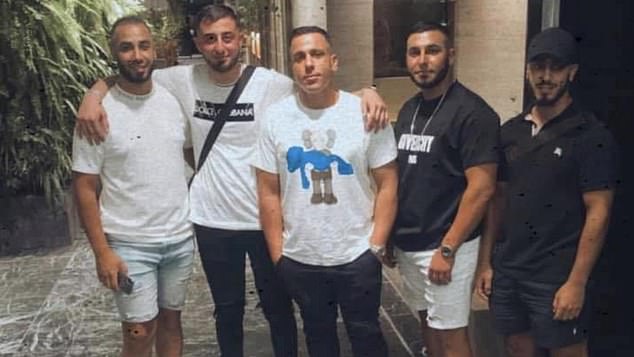 Now they expect the gang war to ramp up, with at least two more Hamze family members warned they are on the Alameddine’s kill list.

The father and son are among four Hamze men to be killed within the past 12 months, after gang leader Mejid was shot dead last October and his cousin Bilal was assassinated in June.

Different branches of the family use variations of the ‘Hamze’ surname including the alternative spelling ‘Hamzy’, with Salim’s name is recorded as ‘Hamiz’ in police data bases.

Ghassam Amoun, brother of Bassam Hamzy, was told he was the number one target after Bilal was gunned down outside a restaurant in Sydney’s CBD.

A secret police document submitted to court revealed Amoun and Bilal’s brother Ibrahem Hamze were at the top of an underworld hitlist. 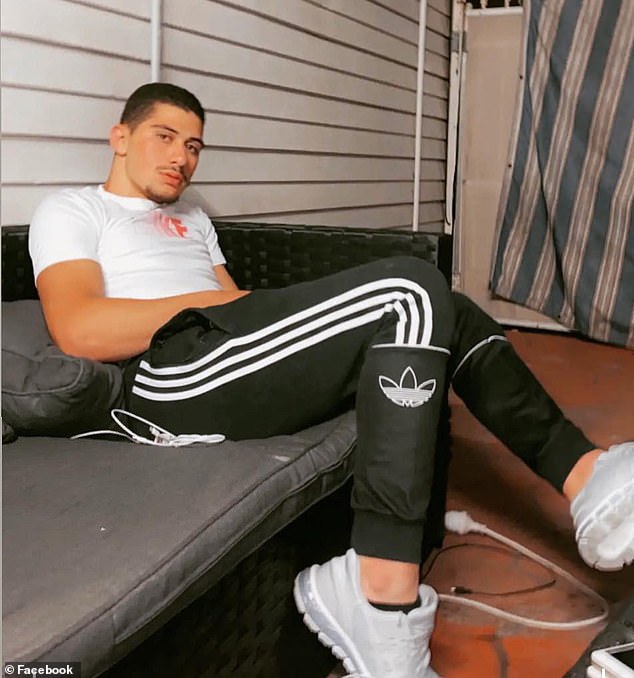 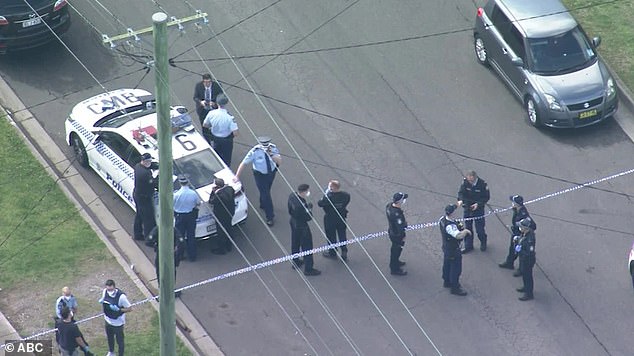 Police tried block the pair from going to Bilal’s funeral in a bid to avert more possible bloodshed, but the men ignored the warnings.

Amoun was said to have hidden his face behind a mask to attend the funeral.

And in August Ibrahem Hamze dodged an alleged hit when highway patrol officers spotted two masked gunmen in a stolen Mercedes allegedly on their way to execute him.

A police pursuit through the streets of North Sydney saw the assassins abandon the Mercedes to carjack a 76 year old man’s Toyota Corolla in Cammeray and escape.

One man was later arrested and charged in connection with the alleged hit attempt.

‘They’re going on in south-west Sydney all the time.’ 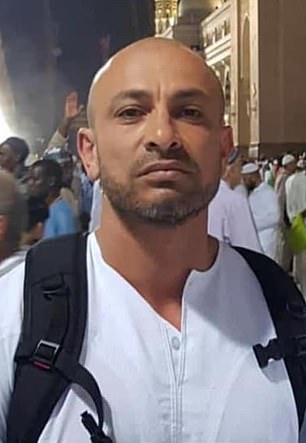 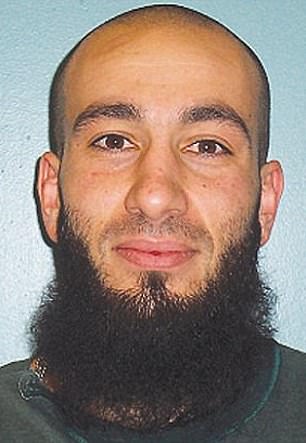 Mejid Hamzy (left), the brother of jailed Brothers for Life gang founder Bassam (right) was gunned down outside his home at Condell Park in October last year

He added: ‘We’ll be ­chasing up every lead in ­relation to this matter and we will be hoping to interview people in the coming days.’

He described Wednesday’s double murder as an appalling act of violence on the streets of Sydney.

‘It’s another appalling crime in a long list of gangland style shootings that have taken place in south-west Sydney.

‘The State Crime Command and local police are hand in glove trying to stop to these crimes before they happen.’ 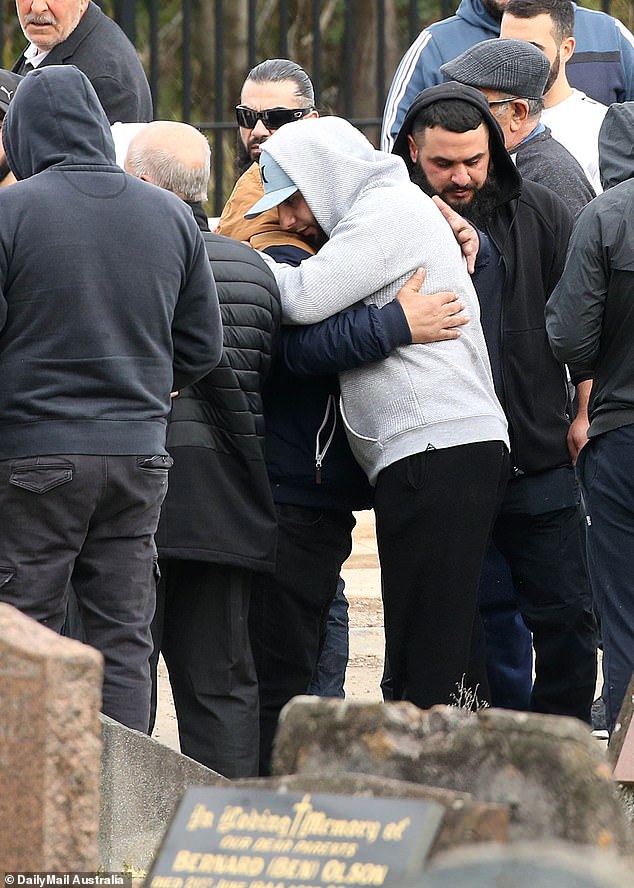 Police tried block Ghassan Amoun and Ibrahem Hamze from going to Bilal’ Hamzes funeral in a bid to avert more possible bloodshed, but the men ignored the warnings. (Pictured, mourners at the funeral in June)

Homicide detectives are now on the hunt for two assassins behind the latest killings.

A burnt-out Lexus SUV was found 1.8km away in Murdock Lane a short time after the shooting is believed to be the killers’ getaway car.

Officers are also trying to track down a dark-coloured Ford Mustang spotted leaving that area moments after the SUV went up in flames.

Law enforcement teams are expected to crackdown on the two gangs as their bloody battle for drug territory continues to spiral out of control. 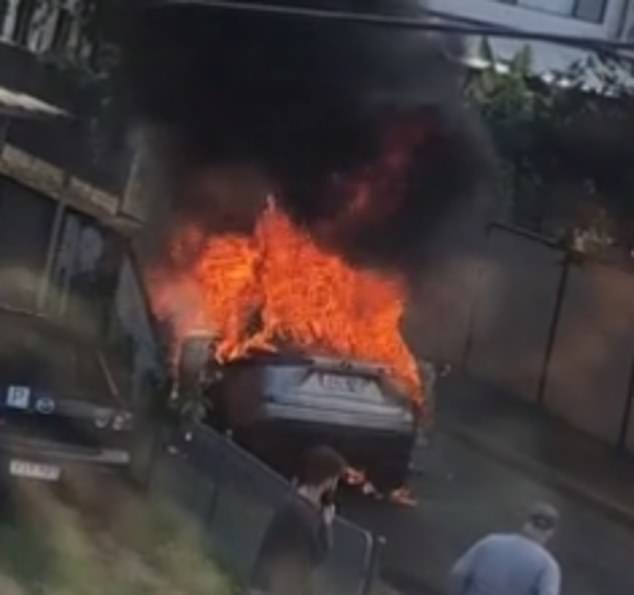 A burnt-out Lexus SUV was found 1.8km away in Murdock Lane a short time after the shooting

Daily Mail Australia understands Salim and his father were leaving home to go to work when they were assassinated.

The victims carpooled together most morning and police believe their attackers were aware of their morning routine.

There were frantic scenes near the site of the execution on Wednesday afternoon as police pulled over residents driving just a block away from the shooting. 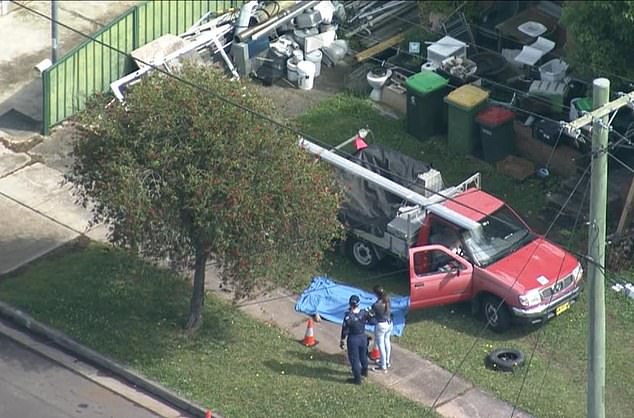 Police forced a Toyota Hilux to pull over and give his phone to officers while officers pored over his vehicle with gloves and torches about 4pm – from the engine to the undercarriage of the car.

His phone was eventually returned and he drove away.

Police pulled over at least two more drivers, but both were released. 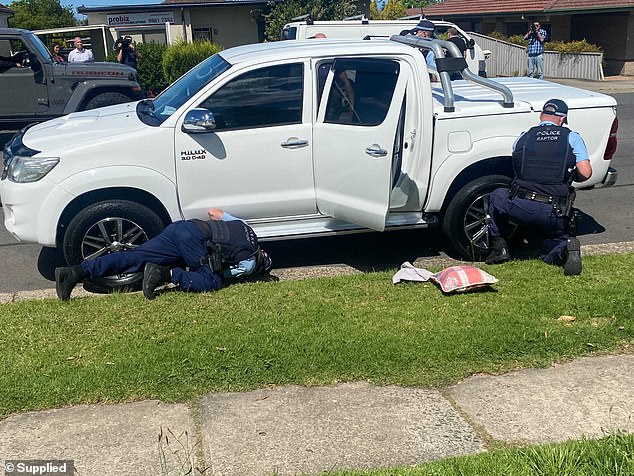 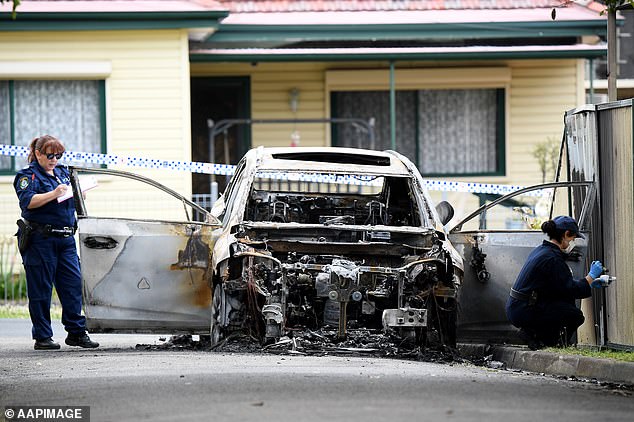 A burnt out Lexus SUV (pictured) was found 1.8km away in Murdock Lane a short time after the shooting 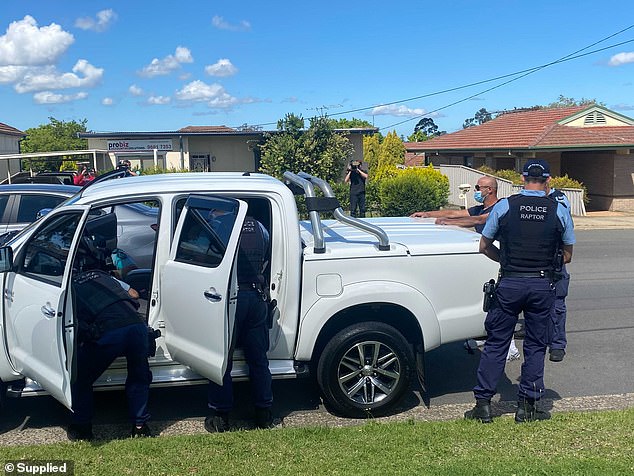 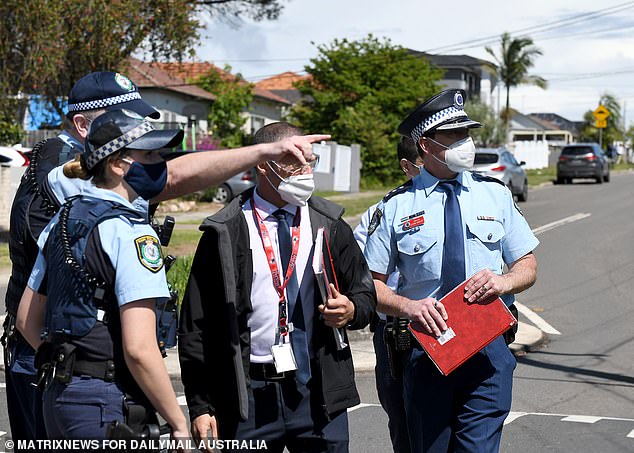 Police have confirmed Salim was ‘well known’ to them and on bail for firearms offences after being arrested by the State Crime Command on September 10.

‘He was known to us as a person sometimes under threat and known to be involved in criminal organisations.’ Detective Chief Superintendent Darren Bennett said. 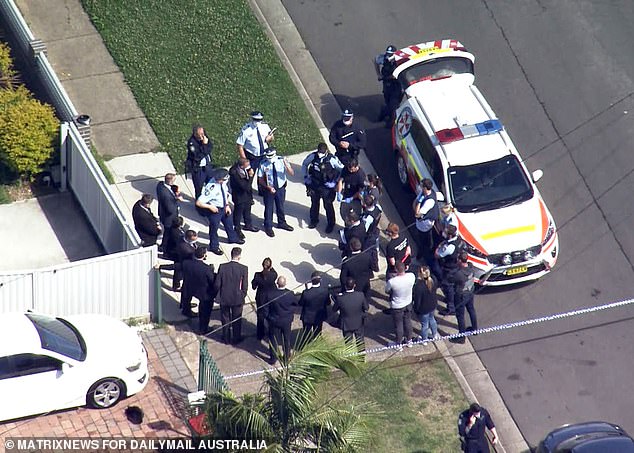 Salim Hamze, 18, and his father Toufik, 64 were shot while leaving for work. Pictured are police being briefed at the scene

Sources close to the Hamze clan told Daily Mail Australia family members held an urgent Zoom meeting with a criminal defence lawyer shortly in the wake of the slaying. 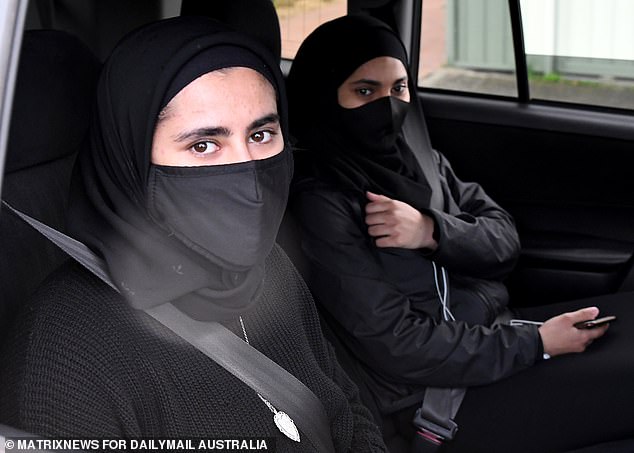 ‘We live in Merrylands but we were driving through this morning at about 9.30 and we saw the police everywhere,’ these women (pictured) told Daily Mail Australia

The slain pair are among four members of the extended Hamze family to be shot dead in the last year.

Underworld figure Bilal Hamze, 34, had a bounty on his head when he was shot twice in the stomach and once in the shoulder in front of shocked onlookers.

Bilal was hiding out in the city amid underworld conflict with members of the rival Alameddine clan.

His public assassination came after his own mother Maha Hamze’s home in Auburn was the target of a drive-by shooting in February. 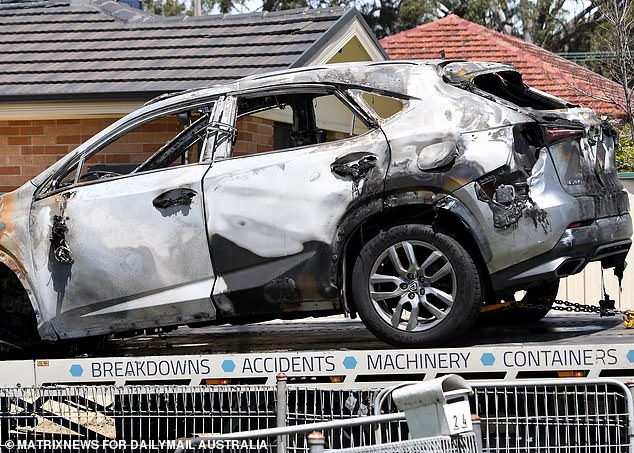 A burnt out Lexus SUV (pictured) found 1.8km away in Murdock Lane shortly afterwards has since been towed away 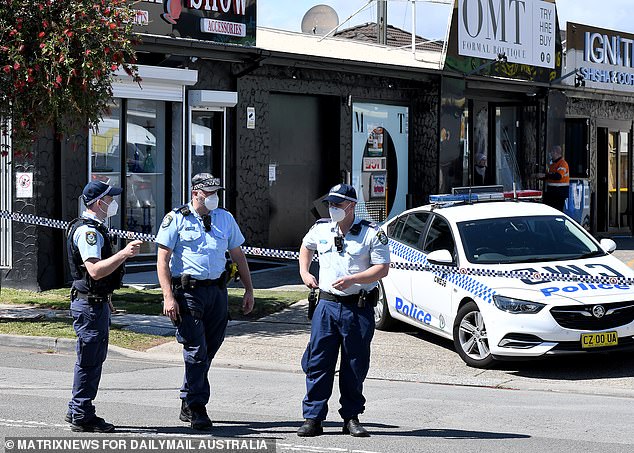 Police were called to the Guildford street off Woodville Road shortly before 9am following reports of a shooting.

No one inside was injured but a nurse at a nearby hospital was hurt when a stray bullet destroyed a window she was standing near.

In October last year, Mejid Hamzy – the younger brother of Bassam, was gunned down in broad daylight outside his Condell Park home.

Two brothers allegedly linked to the Alameddine family have been arrested over the fatal shooting of Mejid, but police believe the gunmen are still at large.

In September, police released CCTV footage of two hooded men fleeing from the scene moments after Mejid was shot dead as they continue to hunt for the killers.

The CCTV captured the face and distinct blond hair of one the men briefly exposed after his hoodie fell off while fleeing the scene through the reserve before getting into two luxury cars.

Almost two months later, Shady Kanj, 22, was struck by a bullet while a passenger in a car driving on Boundary Rd, Chester Hill in western Sydney on August 6. 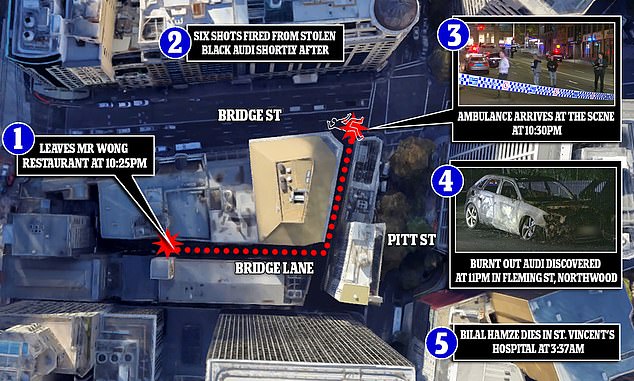 Bilal Hamzy, the cousin of Bassam, was executed in a drive-by shooting in Sydney’s CBD in June (pictured above sequence of events)

Kanj was an associate of both the Hamzy and Alameddine gangs,

A week later, a suspected murder attempt against another member of the Hamze clan was foiled following a police traffic stop in Sydney’s north.

Police believe gangland rivals had been planning to carry out an attack on Ibrahem Hamze when a stolen Mercedes was spotted on Walker Street on August 14.

The driver allegedly refused to stop the vehicle for officers before speeding off and running through a red light.

But the car suffered a flat tyre forcing the driver and another passenger to abandon the vehicle on Miller Street at Cammeray.

Anyone with information about Wednesday morning’s shooting is urged to call Crime Stoppers.