While shivering in a chilly caravan on the set of a TV drama, Sally Lindsay had a brainwave… why not write a series set in the south of France – and give herself the lead role? ‘I was filming Channel 5 drama Cold Call in a car park in Manchester and I was cold to my bones,’ laughs Sally. ‘I’m Mancunian, so it’s not like the first time that had happened, but I just thought, “Wouldn’t it be nice to film somewhere with a warmer climate?”’

And so the seed was planted for The Madame Blanc Mysteries, which has since developed into a six-part sun-soaked series that Sally likens to a cross between Inspector Montalbano and Lovejoy. Former Coronation Street and Mount Pleasant actress Sally, 48, created it, co-wrote it with actress Sue Vincent, and executive produces it via her own production company.

‘It’s something I’ve always wanted to do, write a modern classic in the vein of Death In Paradise or Midsomer Murders, because I think they’re the backbone of British television,’ she explains. And she’s no novice at dreaming up TV shows – she co-created Scott & Bailey, the hit female-led cop series that ran from 2011 to 2016, with Suranne Jones. Back then Sally was unable to co-star with Suranne as she’d originally planned because she was expecting her twins, Victor and Louie, now ten, so she took a supporting role and Lesley Sharp played DC Scott to Suranne’s DI Bailey.

There were no unexpected bumps in the road this time, and Sally leads the action in The Madame Blanc Mysteries as Jean White, an antiques expert who runs a shop with her husband Rory in Cheshire. In the opening scenes Rory dies in a car crash while on a buying trip in France. When Jean discovers that he was living a double life and has left her penniless except for a cottage in the fictional French village of Saint Victoire, she heads there to investigate his death and soon gets caught up in solving antiques-related mysteries in the village, including art theft, forgery and, of course, murder.

Sally based Jean on a woman she met on holiday who bought antiques in French villages near Biarritz and sold them in her London shop. ‘And ever since Coronation Street, when I did a bigamy storyline, I’ve been fascinated by the idea of waking up one day and finding that everything that’s right and true and honest and fine in your life, isn’t,’ says Sally, who played Weatherfield’s Shelley Unwin from 2001 to 2006. ‘Jean thought she was married to this fabulously handsome, charismatic man when actually he was a complete s***. She was the brains behind the business but she has been left with nothing.’

Like Sally, Jean’s a down-to-earth Mancunian, but she says that’s where the similarities end. ‘Jean is a fantasy of mine,’ she explains. ‘I would love to be as crazily observant as her and have her photographic memory and the intelligence required to do what she does. I find it fascinating.’

Sally and Sue peopled Saint Victoire (the Maltese island of Gozo stands in for France) with a raft of eccentrics, both British and French. The most attention-grabbing pair are Judith and Jeremy, a larger-than-life posh British couple who own the manor house, played by Only Fools And Horses’ Sue Holderness and 70s star Robin Askwith. Benidorm’s Steve Edge plays Dom, the local taxi driver and Jean’s love interest. 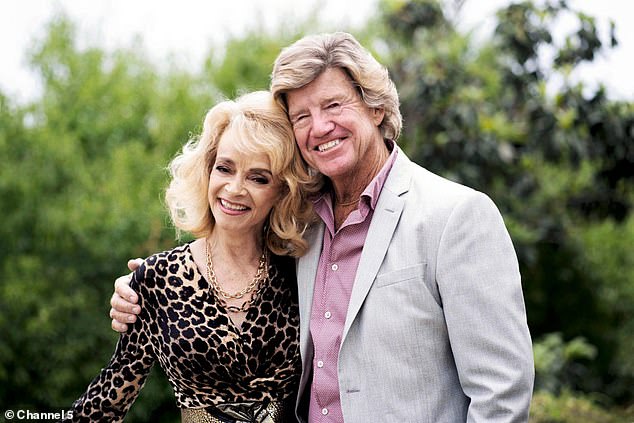 Sue, who was Boycie’s wife Marlene in Only Fools, is a hoot as flirty busybody Judith, and Sally wrote the role specially for her. ‘We all think of her as Marlene, but she’s brilliantly posh in real life, as well as down to earth and funny. Robin did this amazing read for us on tape, and then it turned out he’s lived on Gozo for 35 years! It was meant to be.’

Filming, delayed due to the pandemic, took place earlier this year on Gozo. ‘It’s only the size of Stockport and I wasn’t convinced, but when we did a recce in March 2020 I thought, “Oh my God, it’s just like 60s France!” It’s magical,’ says Sally.

The whole cast and crew then had to adhere to a strict two-week quarantine on Gozo before filming started. ‘Sue and I rewrote a lot of stuff because locations weren’t available, so we sat on our separate hotel terraces with our laptops shouting to each other,’ she says.

Ultimately, it all came together and Madame Blanc has been born as a Mancunian Lovejoy for the 21st century. As for the lead character’s surname, Sally, who’s married to former Style Council drummer Steve White but has never changed her name, reveals, ‘I wrote it so fast that I used my own name. I was 40 when I got married, it would have been ridiculous to change my name,’ she laughs. ‘So it’s nice for Steve that I’m finally Mrs White.’

The Madame Blanc Mysteries is coming soon to Channel 5.