Will Sunrise’s loss of Samantha Armytage be Channel Nine and the Today Show’s gain?

If Seven’s handover from Melissa Doyle to Armytage almost a decade ago is anything to go by, the answer is no, a former TV executive says.

Nine programmers are no doubt hoping that Armytage’s decision to vacate the Sunrise couch to find ‘peace and calm’ will open the door to a Today resurgence.

It has come close to happening before.

The originals: Melissa Doyle, David Koch and team made Seven’s Sunrise a TV powerhouse – and it remained on top of the ratings even after she handed the show over to Samantha Armytage. Also above: Mark Beretta, Grant Denyer and Natalie Barr 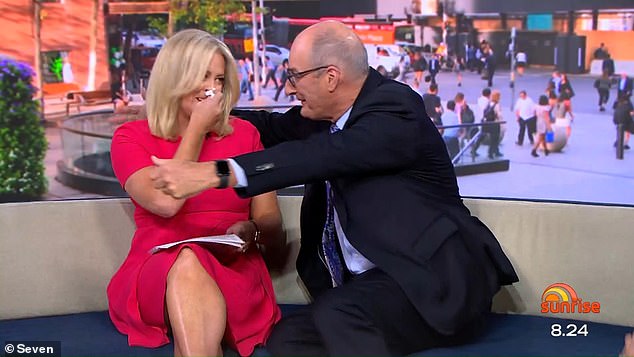 Couch buddies no more: Samantha Armytage accepts a hug from co-host David Koch as she reveals she’s leaving Sunrise to find ‘peace and calm’ out of the spotlight

Last September, Karl Stefanovic and Allison Langdon found themselves atop the ratings in the east coast.

It was a short lived victory – and not a national one. But it came at a time where Sunrise faced criticism for its hosts allegedly ‘phoning it in’.

Industry analyst Rob McKnight, co-creator of TV Blackbox, said it’s without doubt Karl and Ally are at the helm of a ‘greatly improved product’ over previous years.

Ratings figures show they have clawed viewers back to Nine. The show has lifted from a depressing 94,000 viewer deficit last May to tighter margins.

But the former Studio 10 executive producer said ‘there are still days when (Today) lose to ABC News Breakfast’ in the ratings.

Those are generally big news days, such as last November’s US election and last year’s major pandemic events.

‘No doubt Karl and Ally are great together and connecting with audiences but Sunrise hasn’t even come close to losing.’

Mr McKnight said viewers preferred the Sunrise format and that Seven has experience in carefully tinkering with the top-rating show’s formula. 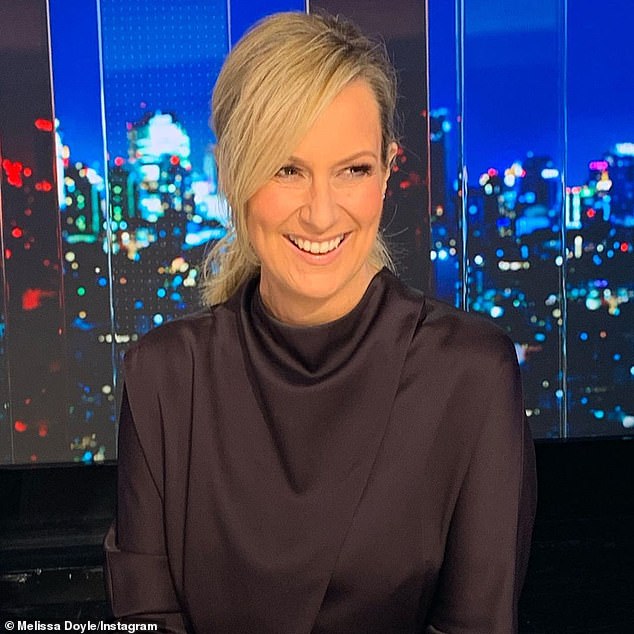 Seven easily changed the guard from Melissa Doyle (above, more recently) to Sam Armytage in 2013 – and David Koch, both their co-host, seems immovable 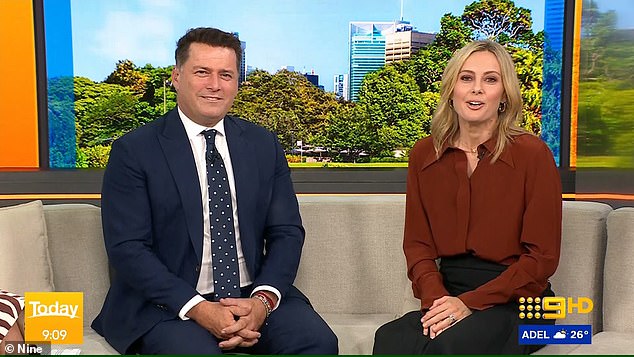 Staying power: Karl and Ally Langdon are the first Today Show hosts to sit on the couch together for more than a season since 2017 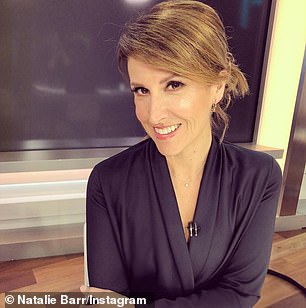 In 2013, the program seamlessly changed the guard from beloved Mel Doyle to spicier Armytage.

‘They transitioned from Mel to Sam with ease and I expect the same to happen here,’ Mr McKnight said.

And his publication has reported Seven will hardly be scaring off the horses with their replacement – slipping veteran newsreader Nat Barr into the chair.

She has been telling Sunrise viewers the news and co-hosting the show since 2003.

And David Koch doesn’t appear to be going anywhere.

‘Nine’s product has greatly improved over the last year but it really needs to provide an alternative to stand out from the crowd,’ Mr McKnight said.

‘My prediction is Seven will remain ahead of the game’.

The 44-year-old, who joined the program in 2013, said: ‘The time has come for the sun to set on my time at Sunrise. I have always been brave and fearless in my career and this decision is no different.’

She explained she was leaving of her own choosing, and was looking forward to life away from the spotlight after a ‘bittersweet’ year that included the death of her mother, Libby, and her marriage to businessman Richard Lavender.

‘I go out of this job at a time of my own choosing and on top of the ratings, which not many people on television can say they do.

‘I’m extremely proud of my almost eight years at the helm of Sunrise, my seven years before that at Weekend Sunrise, and my almost 18 years with the Seven Network.’