‘I have an actual reason to stay home and annoy Zara!’ Sam Thompson reveals he was rushed to hospital with a hernia on his stomach after weeks of ‘feeling unwell’

Sam Thompson has revealed he was hospitalised with ‘a hernia on his stomach’ after weeks of ‘feeling unwell’ on Friday.

The Made In Chelsea star, 29, took to Instagram to update his followers on his health battle after being taken to hospital by his girlfriend Zara McDermott.

Laying in his bed, Sam rested up from his ‘rough couple of days’ as he told fans that he would ‘be up and running’ again soon.

Ouch! Sam Thompson, 29, revealed he was rushed to hospital with ‘a hernia on his stomach’ after ‘a few weeks of feeling unwell’ on Friday

Going into more detail he added: ‘Was crazy, whenever I would eat I’d be doubled up in pain so haven’t properly eaten in ages.’

‘Got a camera down the old throat…which sucks. And he found a small hernia that he thinks is making the stomach inflamed!’

‘Very manageable with medication but it means no food that unsettles the stomach for a while.’ Support: The Made In Chelsea star was taken to hospital by his girlfriend Zara McDermott, who also shared a sweet selfie with her beau while she took care of him

What is a hernia?

A hernia occurs when an internal part of the body pushes through a weakness in the muscle or surrounding tissue wall.

A hernia usually develops between your chest and hips. In many cases, it causes no or very few symptoms, although you may notice a swelling or lump in your tummy (abdomen) or groin.

Sam continued: ‘The worst news really is it means no Nando’s for a while.

‘The best news is I have an actual reason to stay home and annoy Zara for the next few days, and she can’t get angry at me,’ he joked.

Elsewhere, Zara, 24, shared an adorable selfie to her story as she rested her head on his shoulder and looked after her beau.

Alongside the snap she penned: ‘Had to take this guy to hospital. He’s not been very well for the past few weeks and we got some complicated blood results back. Hopefully everything will all be ok!’ Painful: Going into more detail Sam explained he’d been struggling with an inflamed stomach that left him in pain 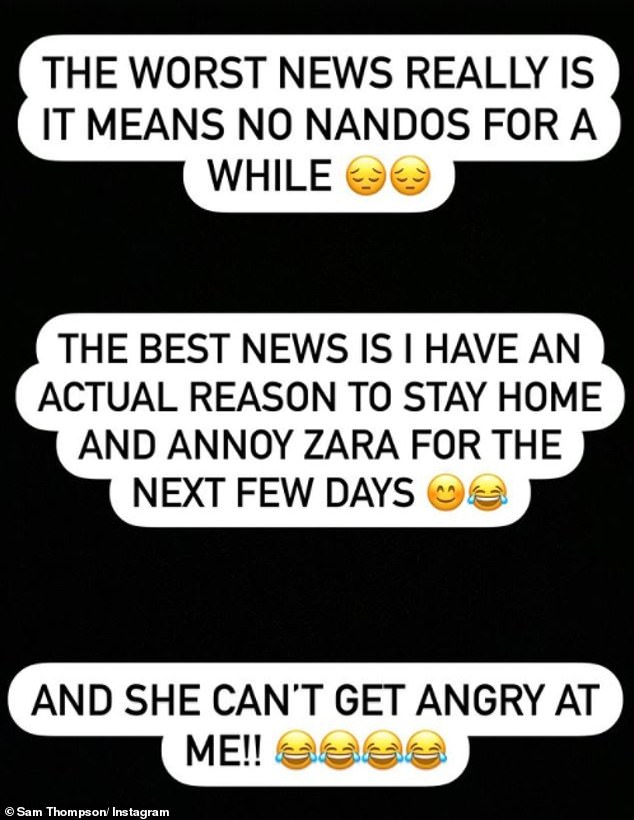 No Nando’s! He joked: ‘The best news is I have an actual reason to stay home and annoy Zara for the next few days, and she can’t get angry at me’ Impressed: The couple have been keeping busy renovating their London ‘forever’ home and shared a photograph of them hugging the landscaper on Thursday

This comes as the couple have been keeping busy renovating their London ‘forever’ home and have been sharing regular updates with their fans online.

The pictures, shared to their home Instagram account The Thompson Project, showed the basic space transformed into a sleek and modern back garden with both a patio and green space.

The Made In Chelsea star and the former Love Islander seemed to be over the moon about the stunning makeover as they gushed over their landscape gardener.

Sharing a photograph of them hugging the landscaper, they exclaimed: ‘We love the garden so much, we never dreamed of having a garden this beautiful.’ 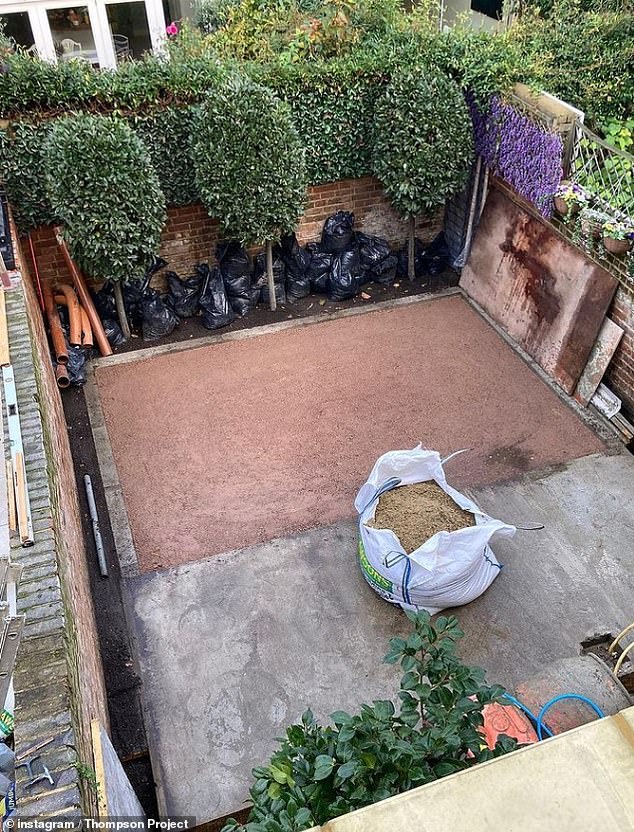 Before…: Zara and Sam transformed the basic square space into a stunning garden and patio as they put the finishing touches on their construction project