A mother has called for tighter school security after wandering throughout her daughter’s school without being stopped.

Stacey Alderete filmed her self wandering throughout South San High School in San Antonio, Texas on Tuesday, saying the doors were unlocked and she didn’t encounter any security.

It came just days after 17 were killed in the school shooting in Parkland, Florida.

Alderete, who said she ‘dressed as a kid at the high school would and carried a back pack’, said she wandered through the building for 20 minutes without any problem.

‘All I need to do is open the door … imagine what could’ve happened within this time,’ Alderete said in a video. ‘Those are our students in those classrooms.’

‘We have AMAZING officers but unfortunately not enough and are VERY SHORT HANDED,’ she wrote in a Facebook post about the incident.

‘If I was able to do this without being detected ANYONE CAN!’ she added.

The South San Antonio Independent School District told KSAT that the ‘safety protocol at our schools requires that all visitors, including parents, first check in at the front desk.’

Alderate, a former school board member, claimed the district wants to scale back on security as part of upcoming budget cuts.

The district argued that was inaccurate, saying that cutbacks had been discussed at a meeting last month, but that nothing had been finalized.

‘Seven million dollars in potential budget reductions were discussed at the last meeting and these reductions impact many departments and areas in the school district,’ a district spokeswoman said. 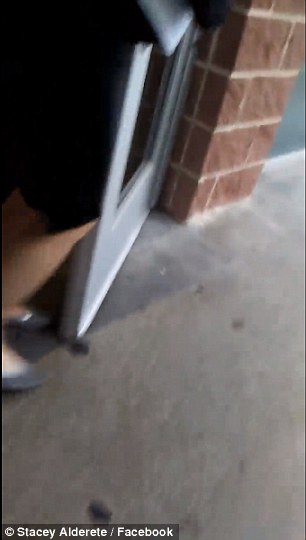 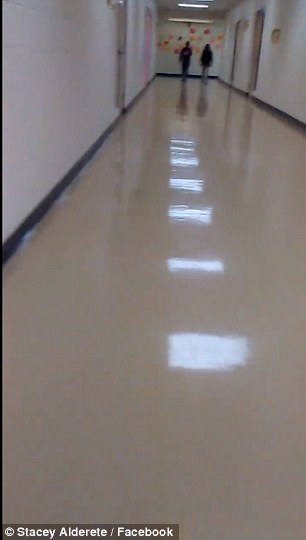 ‘The police department was only one of many areas discussed. These proposed reductions are simply at the discussion level at this time. Final decisions will be made when the budget is adopted in August.’

The district said that currently, there are four police officers assigned to the high school, two at each of the three middle schools, and two officers that patrol and provide services at the nine elementary schools.

Alderate was issued a warning for criminal trespass by the local police department, in what she calls an act of ‘retaliation’ for speaking out.

The mother told ABC News that she’d gotten criticism for showing potential evildoers how easy it is to get into the school. But she said she didn’t regret posting the video.