The San Francisco 49ers’ Richard Sherman has drawn attention to his charitable ways making some significant donations to wipe out school lunch at districts in California and Washington state, and to help team of pint-size football players attend a championship tourney.

Sherman was revealed in social media posts to have cleared $27,000 in lunch debt for public school kids in Santa Clara, California, where the 49ers play their home games, and Tacoma, Washington, near his old team, the Seattle Seahawks, earlier this month.

And around the same time, he donated $5000 to a Pop Warner team from his hometown of Compton, California, which was raising money to attend the National Youth Championship in Florida. 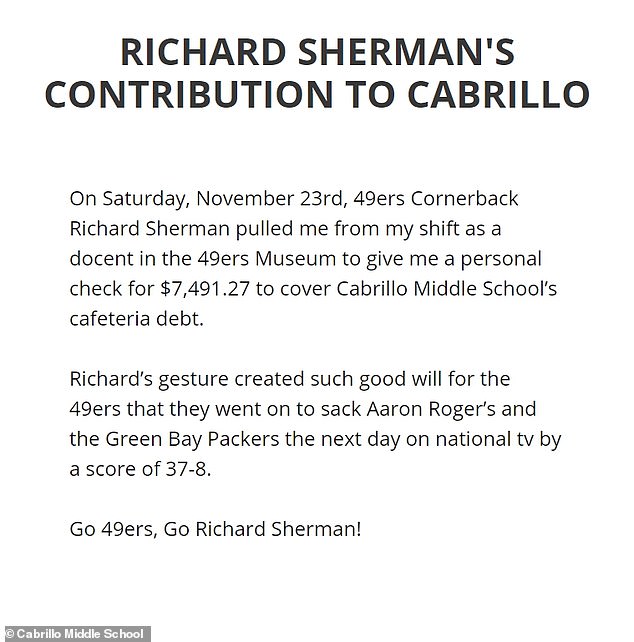 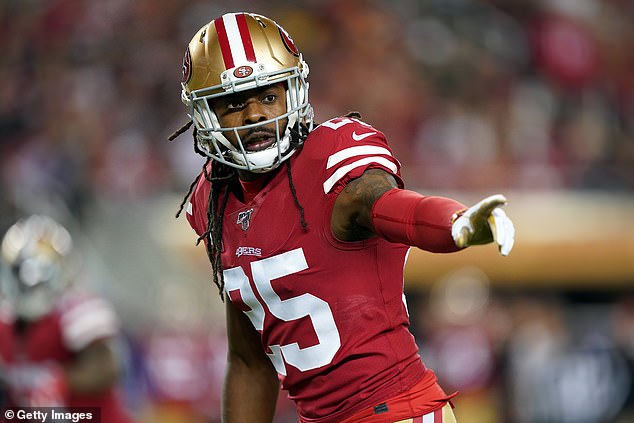 Farber says the good will from Sherman’s good will gave the 49ers the winning spirit to go on to defeat the Green Bay Packers and their star quarterback Aaron Rodgers, on Sunday. Sherman is pictured lining up during the first quarter of the game

The social media promotion he made in support of the team’s GoFundMe page alone returned six times that amount from his followers, reports the National Football League Players Association, which in response named the 31-year-old cornerback one of its ‘Community MVPs’.

‘I was excited to help give these kids an opportunity to do something really special’, Sherman says on the players association website. ‘We wanted to reward them for their hard work and dedication, and their excellence in academics’.

Praises and thanks for his generosity began when the principal of the Cabrillo Middle School in Santa Clara, on Tuesday posted a message of gratitude on the school’s website. Sherman had stepped up to pay off a bill for unpaid school lunches, wrote Principal Stan Garber.

Garber said in the post that Sherman pulled him from his shift as a docent at the 49ers museum on November 23 to hand him a ‘personal check for $7,491.27’.  The school is the closest to Levi’s Stadium, where the 49ers play their home games.

The principal gushed in the post that the ‘gesture’ gave the 49ers the winning spirit to go on to defeat the Green Bay Packers and their star quarterback Aaron Rodgers, the next day by a score of 37-8.

Sherman’s foundation sent a letter to the middle school’s nutrition services department saying, ‘We have found that eliminating student lunch debt is one way to help assist students and their families in relieving some of the stress that comes with attending school on a daily basis’, reports KPIX.

‘The last thing any child should have to worry about is being able to afford eating breakfast and lunch at school; we aim to do our part in eliminating that obstacle’, the letter adds.

As word of the donation hit social media, Tessa Giammona, coordinator of corporate communications for the 49ers, tweeted that Sherman had made a similar, but substantially higher donation to pay off lunch debt at the Tacoma School State in Washington state. 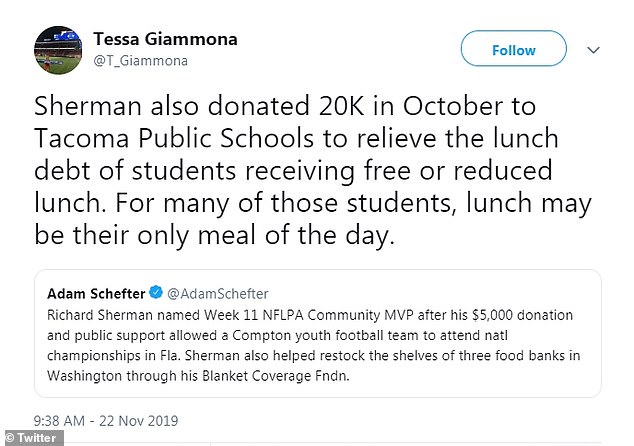 A tweet from Tessa Giammona, coordinator of corporate communications for the 49ers, noted  that Sherman had also made a similar, but substantially higher donation to pay off lunch debt at the Tacoma School State in Washington state

He also had just been named the players association Community MVP just a day earlier, for his $5000 donation to the the Hub City 6U Pop Warner football team from his hometown of Compton, California.

Sherman said he wanted to make his donation, not just to get the squad of kids age 6 and under off to their championship, but also in support of their requirement to maintain minimum grade point averages of 3.1. 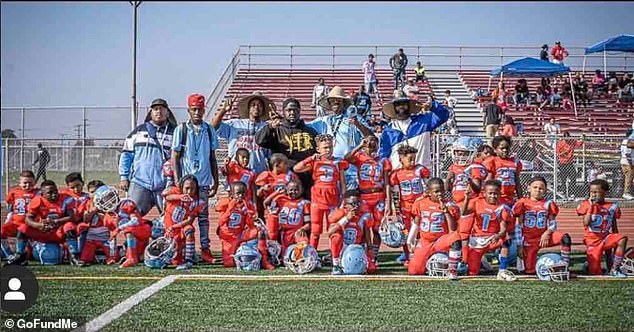 A fundraiser for the Hub City 6U Pop Warner football team (pictured) from Sherman’s hometown of Compton, California, got the San Francisco 49er’s attention

‘Someone get me in contact with the person running the show here please. I respect good football but I respect the 3.1 min gpa more. Establishing good habits young. I would like to help’, he tweeted about his interest in helping the team. 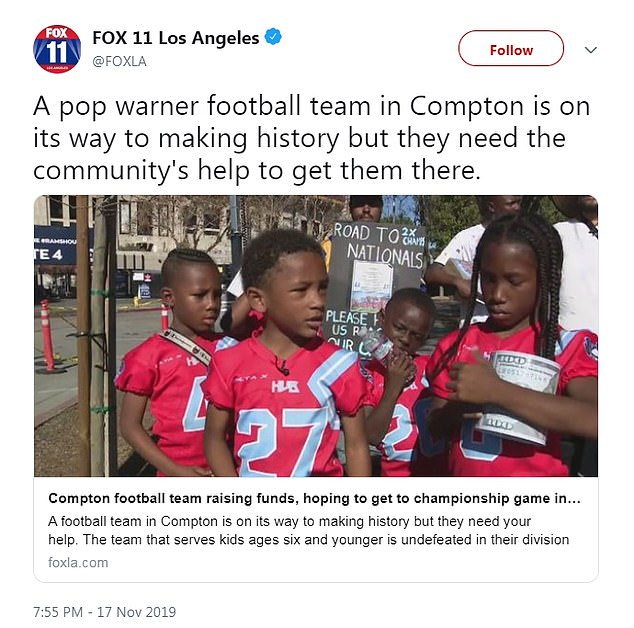 He says in a follow up tweet that he would make his donation directly to the team’s GoFundMe page. 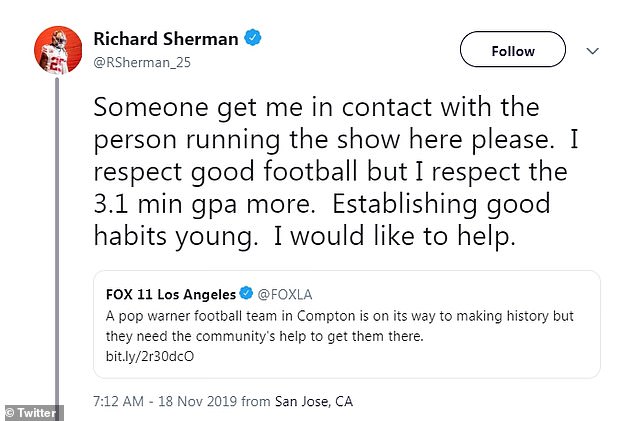 Sherman said he wanted to make his donation, not just to get the squad of kids age 6 and under off to their championship, but also in support of their requirement to maintain minimum grade point averages of 3.1

The players association pointed out that his promotion about the fundraiser to his more than 2 million followers on social media resulted in overwhelming support.

‘Overnight, the team surpassed their fundraising goal, generating more than $30,000 that will cover the travel, lodging, food and other trip expenses for  the team of 20 kindergartners and first-graders’, wrote a spokesman for the players association in an announcement naming Sherman a community MVP.

Sherman also had earned honors for helping restock the shelves of three food pantries in Washington state through is Blanket Coverage Foundation, says the players association.

‘When we heard the food bank was experiencing a food shortage, we knew we had to step in and do something,’ Sherman told the players association.

‘It has been incredible to see how our donation has sparked a big movement and has driven others to donate as well. No child should ever go hungry’. 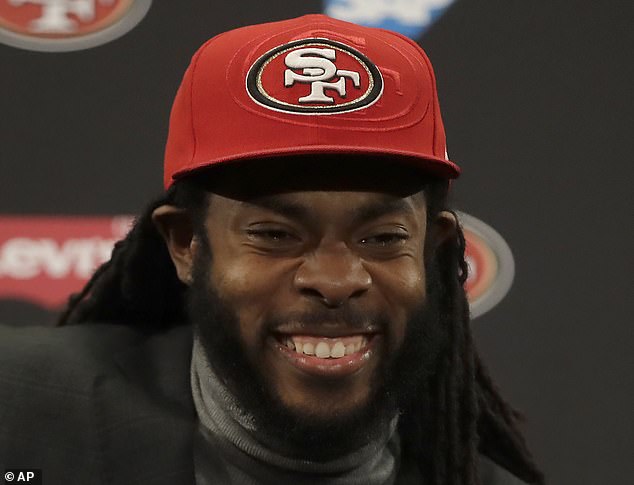