San Francisco 49ers 21-13 Seattle Seahawks: ‘Mr. Irrelevant’ Brock Purdy leads the Niners to another victory as they lock up the NFC West division title, while their archrivals’ playoff hopes take a hit

Rookie Brock Purdy a pair of touchdown passes to George Kittle, and the San Francisco 49ers won their first NFC West title since 2019, beating the Seattle Seahawks 21-13 on Thursday night.

Despite using their third starting quarterback this season, the 49ers (10-4) continued to show they might be the class of the NFC alongside Philadelphia. San Francisco won its seventh straight, using its stifling defense to frustrate Seattle into countless mistakes.

The Niners got a handful of big plays from their rookie quarterback. Playing on the road for the first time in his career, Purdy connected on his first 11 pass attempts, including a 28-yard TD to Kittle in the first quarter when Purdy executed two fakes before hitting his tight end wide open. 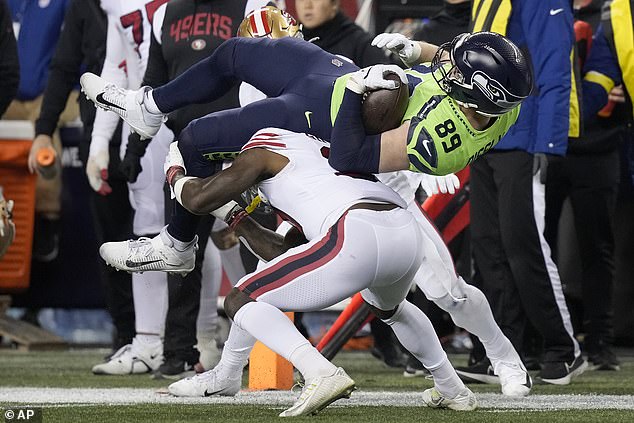 Purdy and Kittle connected again early in the second half as Seattle’s defense blew a coverage and left Kittle open for a 54-yard TD and a 21-3 San Francisco lead. Purdy finished 17 of 26 for 217 yards, joining Aaron Rodgers as the only QBs since at least 1950 to have a passer rating of at least 115 in each of their first two starts.

Kittle had four catches for 93 yards and Christian McCaffrey rushed for 108 yards, including a 1-yard TD run in the final minute of the first half following a Seattle turnover.

Seattle (7-7) lost for the fourth time in five games and its playoff hopes took another hit. Geno Smith threw for 238 yards and Seattle’s first offensive TD this season against the 49ers, but was under constant pressure. 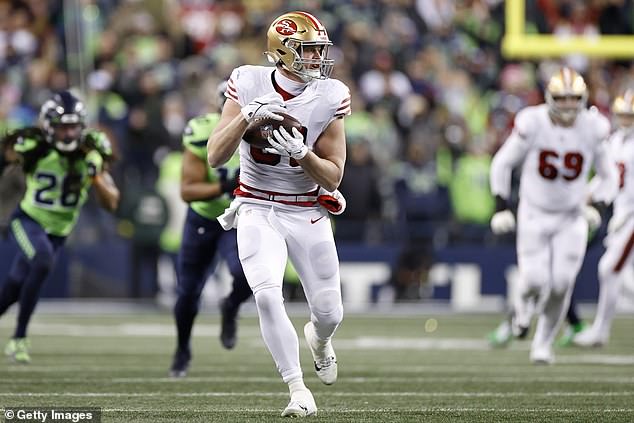 Seattle pulled within one score late in the fourth quarter after Robbie Gould missed a 43-yard field goal and the Seahawks went 67 yards in 1:25. Smith hit Noah Fant on a 10-yard TD with 3:35 remaining. But Purdy converted a third-and-1 with a scramble before the 2-minute warning, and Jordan Mason sealed the victory with a 55-yard rush with 1:02 remaining.

Smith was sacked three times and hit nine times. When he did have time to throw, open windows for his pass catchers were small. Seattle had one play longer than 20 yards.

And Seattle missed taking advantage of a 49ers mistake late in the first half.

Seattle scored its first offensive points in two games against the 49ers midway through the second quarter on Jason Myers’ 38-yard field goal. Seattle’s only points in the first matchup in Week 2 came on a blocked field goal returned for a touchdown.

But the Seahawks followed with a pair of critical mistakes. Quandre Diggs dropped a potential interception that would have given Seattle the ball on San Francisco’s side of the field. And Travis Homer fumbled on a big hit by Dre Greenlaw at the Seattle 41 with 1:08 left in the second quarter. The fumble was returned 35 yards by Charvarius Ward, and two plays later, McCaffrey scored to give the 49ers a 14-3 lead. 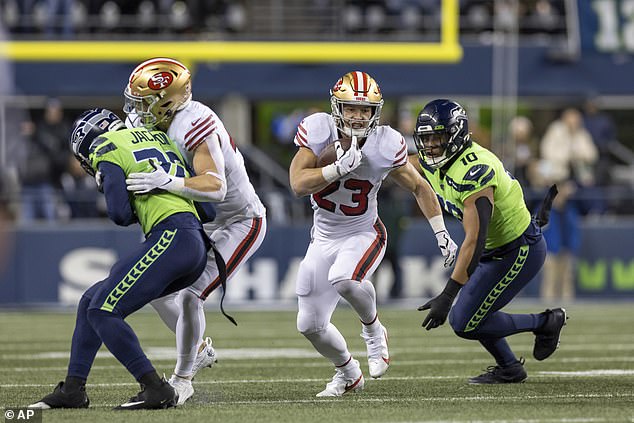