A sandwich firm at the centre of a listeria outbreak at hospitals that has been linked to the deaths of five people has been allowed to restart production.

The Food Standards Agency has been investigating the Good Food Chain, based in Staffordshire, but said it does not believe the firm is the source of the outbreak.

Nine cases, including the five deaths, have been identified at seven hospital trusts around the UK where the patient is suspected to have contracted the illness from eating pre-packaged Good Food Chain sandwiches and salads.

The FSA said it is moving its focus to where the ingredients came from but has not yet determined the exact source.

Supplier North Country Cooked Meats, based in Salford, Greater Manchester, has tested positive for the particular strain of the outbreak and has since stopped production.

Public Health England confirmed the number of cases linked to the outbreak remained at nine from seven separate hospital trusts.

Last week mother-of-five Enid Heap, 84, was named as one of the victims of the outbreak.

The retired chemist from Beswick, Manchester, was admitted to Manchester Royal Infirmary in March with breathing difficulties, but died on May 6 with her family at her bedside.

What is listeriosis and how does it spread?

Listeriosis is a rare but deadly infection caused by eating food contaminated with a bacteria called listeria monocytogenes. There are about 170 cases of listeriosis in the UK every year, and it kills about one in four of those affected. Most people who eat food contaminated with listeria develop mild flu-like symptoms that pass within a few days. But in high-risk individuals, the listeria can spread around the body, leading to life-threatening complications including sepsis.

Listeria is most commonly spread in pre-packaged sandwiches and ready meals, as was the case in this outbreak. It can flourish with or without oxygen and, unlike many other bacteria, thrives and reproduces at temperatures as low as 0°C. This enables it to survive in the fridge and pass through food-processing equipment and the food chain. Historically, the bug has been associated with soft ripened cheese, such as camembert or brie, as well as pate, sliced meats, salad leaves and raw unpasteurised milk. You can also catch listeria from someone – for example, if you eat food they have handled when they have not washed their hands.

How can it kill you?

The listeria bacteria enters the intestinal system in contaminated food, before colonising the liver where it multiplies. If the body is unable to fight off the infection, it can lead to sepsis or meningitis, which can kill within hours. Listeria bacteria have the ability to hijack immune cells and live within human cells, making it very difficult to treat. It is diagnosed with a blood test and treated with antibiotics.

Listeria frequently proves deadly for those with weak immune systems – with pregnant women and newborn babies most at risk. Pregnant women are advised to avoid all soft cheeses because even if a listeria infection causes only a mild illness in the mother, it can spread to their unborn baby with devastating consequences. NHS England said more than a quarter of pregnant mothers with listeriosis lost their babies. People aged over 60 years are also deemed to be at high risk of developing listeriosis, as are those who having chemotherapy, which suppresses their immune system.

Have there been previous outbreaks?

There has never been a major outbreak of listeriosis in the UK, but there have been product recalls following scares, including the recall of two Cadbury desserts last week. South Africa suffered the biggest-ever listeriosis outbreak last year, when 967 people were infected and 180 died in an outbreak which was traced back to processed meat.

Also named was Beverley Sowah, 57, a retired nurse born in Jamaica who lived in Manchester. She was admitted to the same hospital to receive treatment for advanced breast cancer on April 15 but died 11 days later.

Lsst week the NHS identified University Hospitals of Derby and Burton as one of the hospital trusts affected by a patient death.

Meanwhile Good Food Chain confirmed its Staffordshire headquarters has undergone a deep clean and added it had not resumed production yet even though it had been given the green light.

A spokesman for the company said: ‘The FSA has confirmed that we are not the source of the listeria strain in question, and that we follow ‘best practice for manufacturing, cleaning, and environmental standards’.

‘While this means we can now resume production, we have not yet taken any decision about whether it is viable to do so.

‘Production therefore remains suspended for the time being.’

The FSA added an enhanced set of food safety measures have been put in place at the company’s base and that Staffordshire County Council would be carrying out strict monitoring over the next three months.

The Good Food Chain will also have to reapply for FSA accreditation before it can supply the NHS with food again.

Dr Colin Sullivan, Chief Operating Officer at the FSA said: ‘This is a complex investigation, but we have worked to swiftly identify and remove from the food chain the products linked to these hospital cases.

‘Our investigations are now focused on where the outbreak strain originated from and subject to strict verification and ongoing monitoring by Stafford Borough Council, The Good Food Chain company is now able to restart production.

‘The company will be carefully monitored to ensure public health continues to be protected. Our thoughts remain with the families of those who have passed away.’

Councillor Jonathan Price, the Cabinet Member for Environment at Stafford Borough Council, said:  ‘We have worked tirelessly with the Good Food Chain and are reassured that their manufacturing processes, cleaning procedures and environmental standards meet those we expect for producing ready to eat foods.’

‘But our work does not stop there as the health of the public is our top priority.

‘So we will continue collecting environmental swabs from surfaces at the business, taking samples of food, and working with The Good Food Chain to ensure they have control measures in place to thoroughly assess those supplying products to them.’

All confirmed cases to date have been linked to sandwiches produced by The Good Food Chain.

The company voluntarily ceased production on 5 June and withdrew all products which remained in date.

Evidence suggests that all individuals ate the affected products in hospitals before the withdrawal took place on the 25 May. 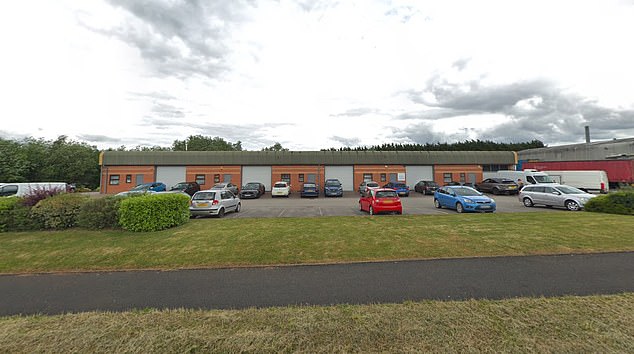 The firm confirmed its base in Staffordshire, pictured, has undergone a deep clean but that it has not started production again because it was investigating ‘whether it was viable’

Public Health England added no cases of listeriosis linked to this outbreak have been confirmed in people outside of hospital settings and therefore the risk to the public remains low.

North Country Quality Foods voluntarily stopped distributing supplies on 3 June and a withdrawal of all ready to eat products has been carried out on a precautionary basis.

The products supplied by North Country Quality Foods to other businesses have not led to any reported cases to date.

Public Health England confirmed it had found 20 other cases of listeria in the two months since the first case linked to the Good Food Chain was discovered.

But the body confirmed none of these 20 were linked to the outbreak or each other and were in line with the normal amount of cases they would expect to see, with around 166 cases identified on average in the UK each year.