The mother of a Sandy Hook victim has shared an emotional post about her fear of forgetting her son months before the mass shooting’s anniversary.

Nicole Hockley of Newtown, Connecticut, wrote about Dylan, who was six-years-old when he became one of 26 people murdered by Adam Lanza in 2012.

She wrote that he was in her life for 2,473 days and that Monday marked 2,474 since his death along with 19 other children aged 6-7 and six school personnel.

‘I feared today. Would him being gone longer than he was here mean I would forget him?’ Hockley posted on Twitter, along with a picture of her son.

Nicole Hockley, the mother of Sandy Hook victim Dylan (above), 6, shared a post about her fear of forgetting him after he had been dead for more days than he had lived on Monday 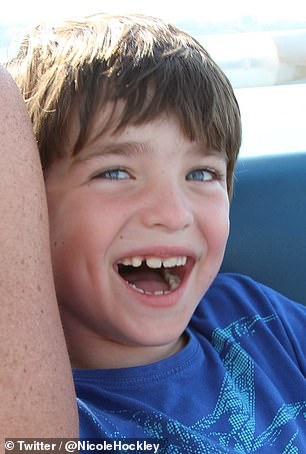 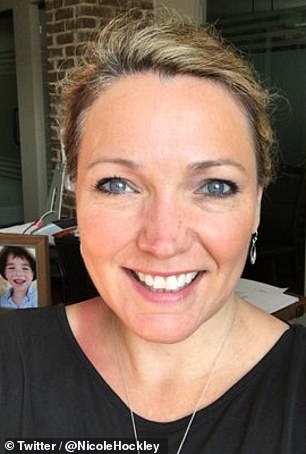 Dylan (left) was one of 20 school children between the ages of six and seven to be killed by Sandy Hook gunman Adam Lanza. He killed a further six school personnel at the elementary school and also his mother at their home in Connecticut. Hockley (right) has advocated for tighter gun control laws ever since the tragedy 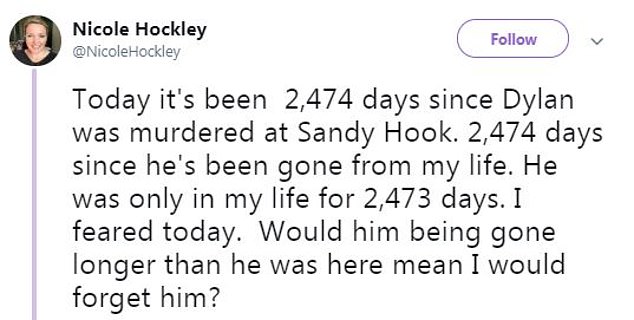 Hockley’s post (above) began by stating the amount of days Dylan had been in her life for and later added that she has ‘forgotten nothing’ as he will remain in her heart, soul and memories

The heart-breaking post resonated with over 24,000 who liked it and a further 4,400 who shared it as of Tuesday.

Hockley wrote about her worries that she would lose all memories of her son: ‘His laugh, his eyes, the smell of his hair, his voice, the feel of his hand in mine? I am sad today, but I no longer have fear.

‘I have forgotten nothing. My son lives on in my heart, in my soul, in the memories of our family and friends and in the work of me and his Daddy.

‘We will always love him and miss him. My butterfly is gone, but never forgotten, no matter how many days go by.’

Hockley has gone onto advocate for gun violence protection and was part of a group that founded the Sandy Hook Promise in 2013.

The group recently shared a gruesome ‘back-to-school essentials’ PSA in a bid to remind Americans of how commonplace mass shootings have become.

The video called on people to stop treating gun violence as inevitable and instead to educate themselves on how to prevent it.

In the PSA, one boy who is running from a supposed mass shooter in the corridors says, ‘These new sneakers were just what I needed for the New Year.’

The anniversary of the shooting at Sandy Hook Elementary School is around two-and-a-half months away.

He took firearms from his mother Nancy Lanza’s legally purchased collection, killed her at their home and then traveled to the school.

Lanza murdered 26 and injured two others before committing suicide by shooting himself in the head.

Hockley had previously shared other images and tributes to her son in a December 2018 post. 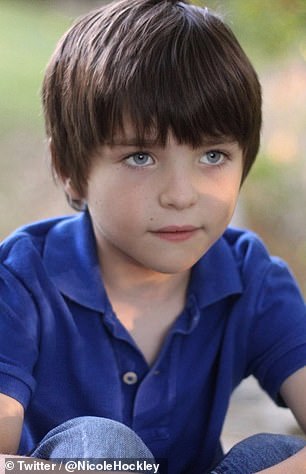 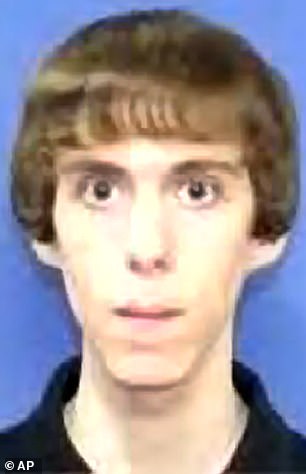 Hockley wrote about her son Dylan (left) on Monday in a post that was retweeted over 4,400 times on Twitter. The tweet was made around two-and-a-half months ahead of the seventh anniversary of Sandy Hook. The horrific killings were committed by Adam Lanza (right), who was 20-years-old when he went on a murder spree on December 14, 2012 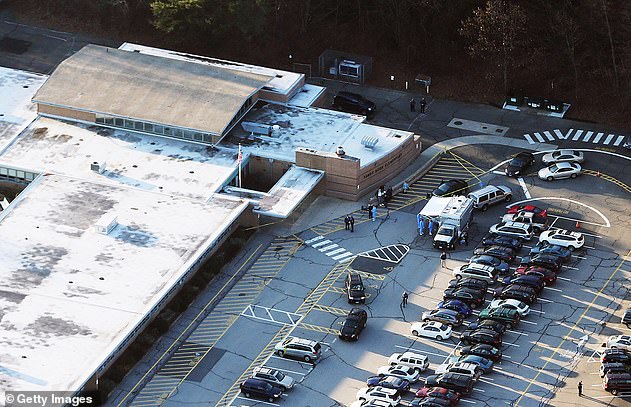 Hockley’s post from Monday was responded to by many Twitter users who shared in the mother’s grief and reassured her that Dylan would never be forgotten.

Representative Eric Swalwell, of California, wrote: ‘I bet those were the best 2,473 days of your life (or anyone’s who was blessed to know your beautiful son).

‘We will never forget the Dylan you’ve shared with us or the courage you show every single day to make sure one day, no mother will ever have to experience this.’

Pro-choice activist Cecile Richards, 62, added: ‘You are in my heart Nicole. Thank you for sharing your love for Dylan with all of us. We will never forget him.’

Diana Viola wrote: ‘I don’t know how you get through this. My heart is with you.’

Another added: ‘No, you will never forget your adorable little boy. He will be in your heart forever. Please know that he has your love with him, it’s the thing that travels from this world to the next. Love is the tie that bonds forever. Your son will be with you forever.’