What mature adult doesn’t want to capture some of the carefree fun and whimsy of their childhood?

Well thanks to designer Sandy Liang, a lucky few grown-up guests at her New York Fashion Week Spring/Summer 18 presentation had the chance to once experience a feeling of childlike excitement thanks to a playful and elegant collection that cleverly fused refined style with elements of silliness.

Traditionally elegant silhouettes and fabrics were given new life, as New Yorker Liang experimented with ‘playful interpretations of nostalgic narrative’ by adding sweet details such as a gel-filled floral embellishment or a nipple-ring inspired accessory.

Something new: Sandy Liang presented a beautifully girly spring/summer 18 line – her tenth collection – at the Standard East on Sunday

Making a change: Having once focused solely on outerwear, the designer told DailyMail.com that she is now thinking much more about what’s underneath 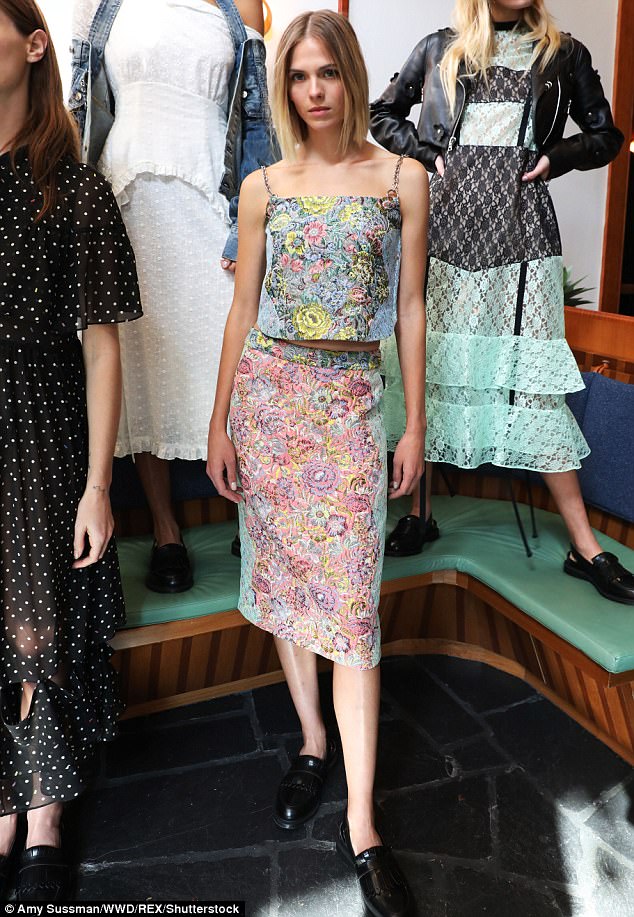 Something old, something new: According to a statement, the collection was about remaining true to the brand’s ‘downtown roots’ but with new, playful interpretations of nostalgic narrative

Making a move away from what was once a sole focus on outerwear, Liang told DailyMail.com that she is now just as interested in ‘what the woman is wearing underneath’, be that a chic lace dress or a distressed double denim look.

‘When I first started, I did a lot of outerwear and I was very outerwear focused,’ she explained at the presentation, which took place at the Standard East’s Narcbar on Sunday afternoon.

‘That still speaks to me and my vibe, but definitely getting more comfortable with ready-to-wear. I love the dresses, I care a lot more about what’s happening under the coats, and I’m having a lot of fun with it.

And a part of that journey for Liang was about looking to her past for inspiration – specifically her childhood – and using those nostalgic elements in order to inject some fun into both the elegant, girly pieces within her collection, and the more tomboy-esque styles.

‘Everything I design is something that is personal to me – I would have a really hard time otherwise because I wouldn’t care,’ she noted. ‘Everything goes back to a childhood nostalgia, or something from my neighborhood, or a friend or my family.’ 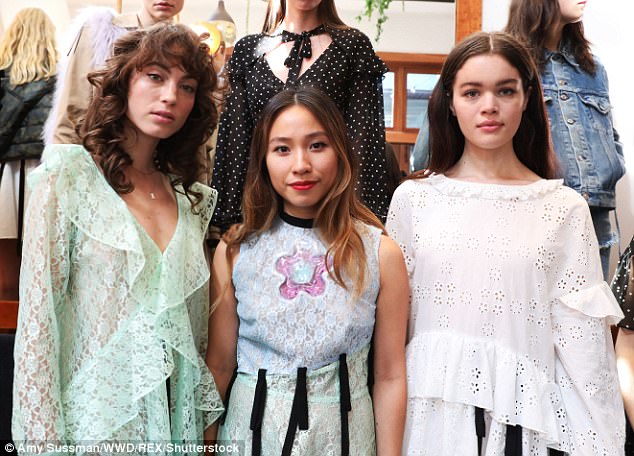 Whimsy: Liang (center) injected elements of nostalgia into her collection to conjure up hildhood references in a mature, elegant way, such as the gel-filled flower on her own dress

Details: She put her own playful spin on each piece, such as updating the classic fleece jacket with an elegant, luxury jacquard pocket, or adding a halter strap to her denim jacket 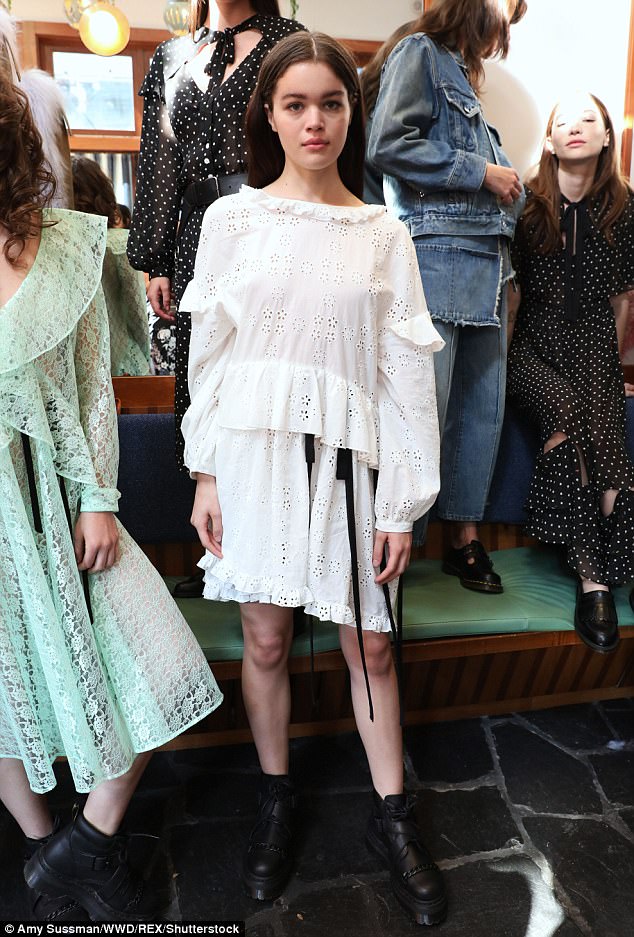 Year-round style: Liang told DailyMail.com this collection ‘bleeds’ into the previous, noting that she wants the Sandy Liang girl not to view her designs as being ‘for’ a certain season

Industrial, yet sexy: ‘Work and play combine artfully in the Corbin Belt, which is part garter, part hardware tool belt,’ the brand said of its new must-have accessory (left) 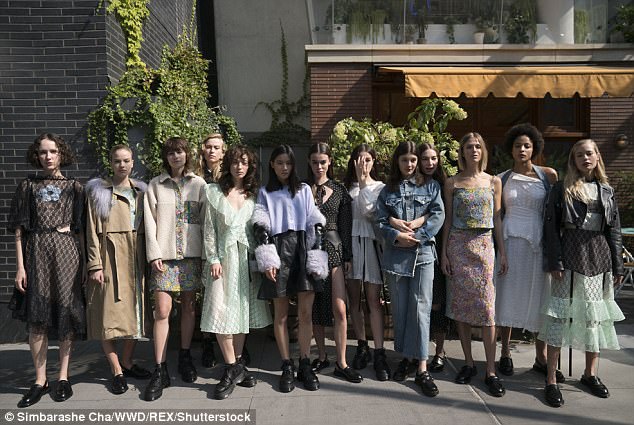 Gang’s all here! The presentation took place at the Standard East’s Narcbar

However, far from wanting her latest designs to simply be a nod to aspects of her childhood, Liang explained how important it was that her pieces still maintain that adult edge, which would be ‘juxtaposed’ with the more youthful touches.

‘It’s about doing [childhood nostalgia] but in an elegant way, because you don’t want to be so obvious… then you’re just Lisa Frank and what’s the point?’ she said.

‘The juxtaposition is key.’

In a statement released alongside the collection, a brand spokesperson explained that juxtaposition, saying: ‘Gel-filled floraldecals grace the bib of lace dresses, a touchable element balanced by the movement of ruffles and black sheer ribbons.’

It certainly wasn’t just about those more youthful details however; there are also some more grown-up, yet equally fun, elements at play within the pieces.

As the brand notes for the collection explain: ‘Liang’s subtly wry references are woven through the collection with inventive humor. For Spring, she customized the Lit Print, which features polka dots mixed with tiny rainbow lighters.

‘Denim in the collection is embellished with clustered Swarovski crystals, as well as metal loops that originated as nipple jewelry offering a clever nod to punk aesthetics.’

The bright and sun-filled New York City day was reflected perfectly in designer Tanya Taylor’s Spring/Summer collection, which she presented at Spring Studios on Sunday.

Proving that florals for spring really can be groundbreaking, the designer used bold primary colors in order to inject some edge into her floaty feminine silhouettes and flower-focused prints.

The combination of clashing bright yellows and blues worked perfectly with the more traditional patterns and color-blocked sandals that were worn by each of the models.

Taylor once again combined edge and elegance courtesy of her scarf-style choker necklaces which were made out of the same bold floral fabrics as her dresses and each featured a chunky gold bead in the center. 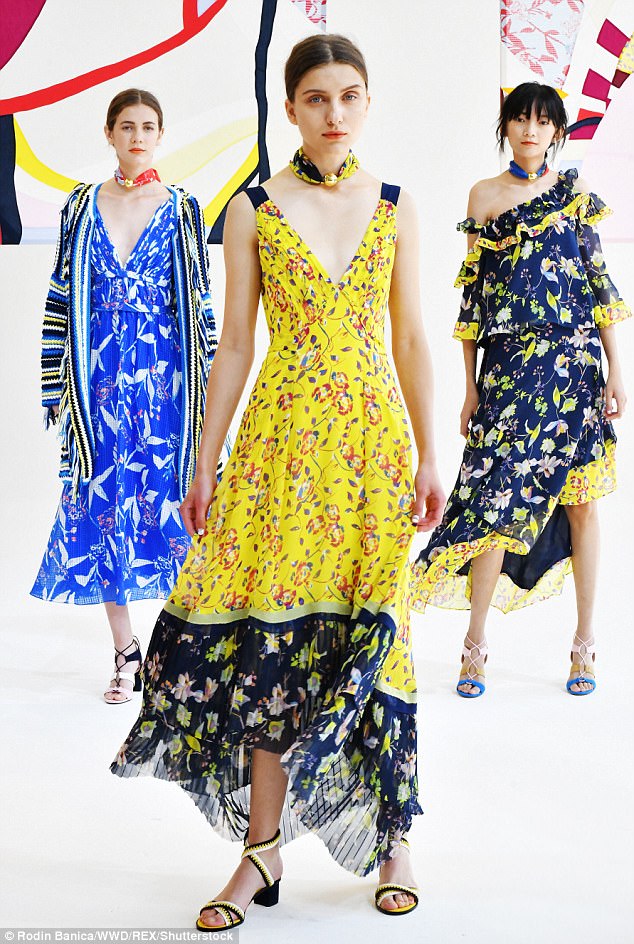 Bold and bright: Designer Tanya Taylor proved that florals for spring really can be groundbreaking at her Spring/Summer 2018 presentation at New York Fashion Week 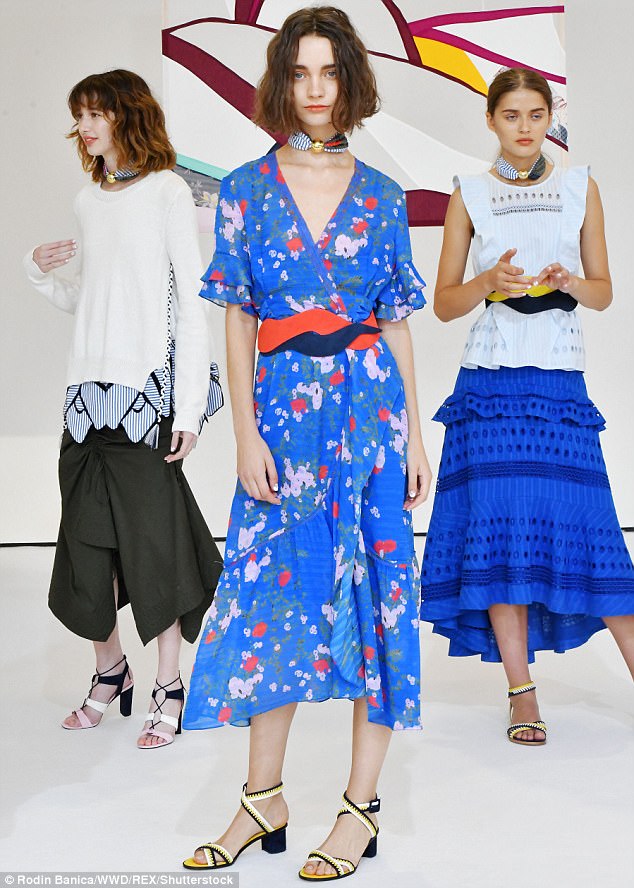 Making a statement: The designer mixed traditional elegance with clashing, bright colors, adding a new edginess to the feminine silhouettes and flower-focused patterns 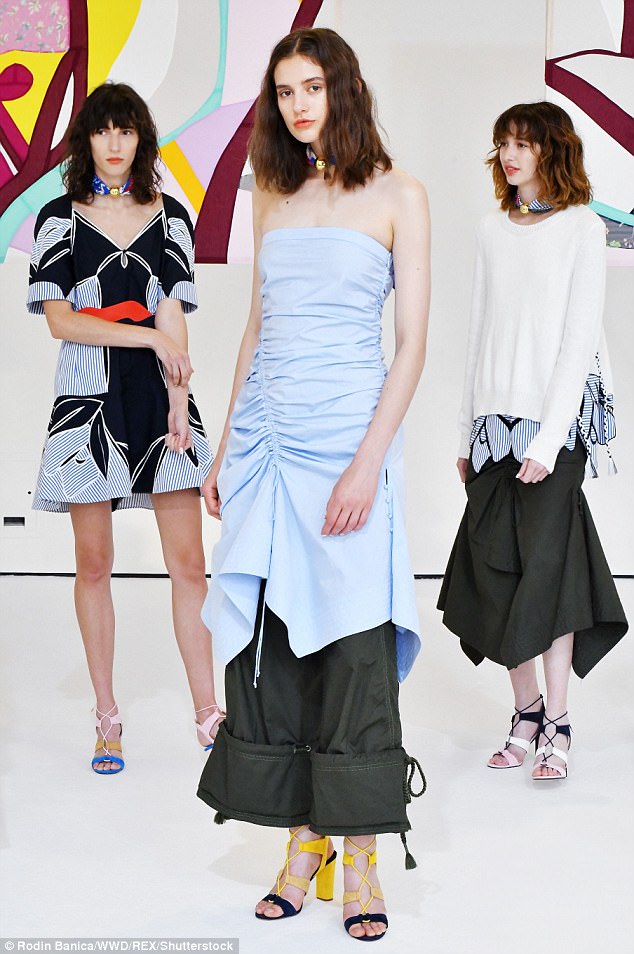 Playtime: New life was breathed into plain fabrics with textures and fun design elements including drawstrings and tassels 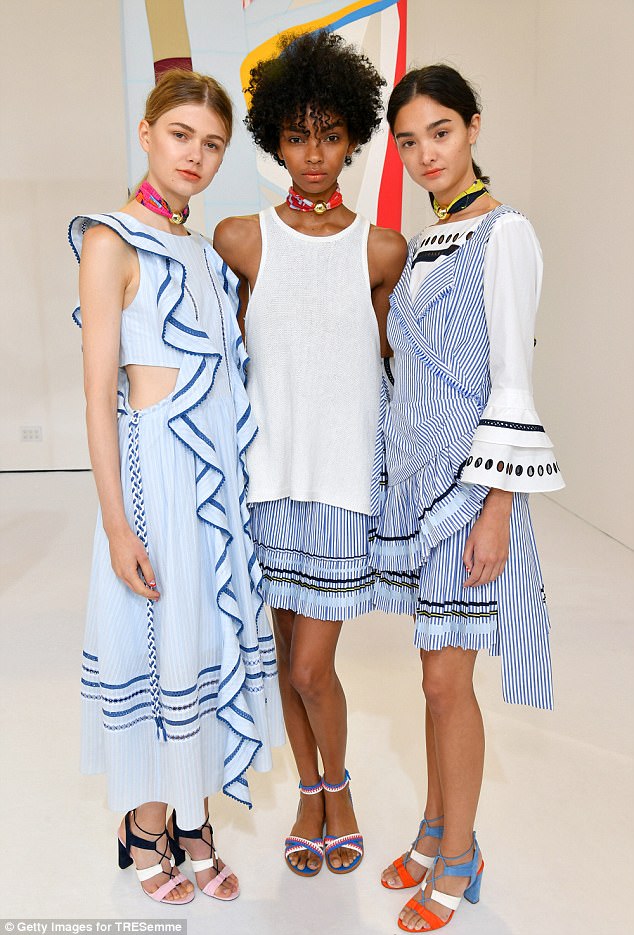 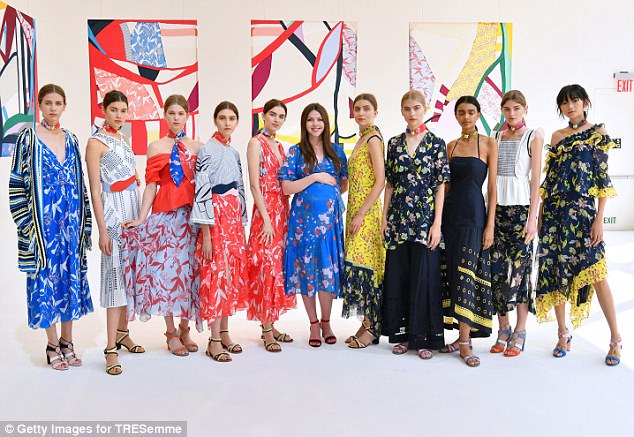 Blooming! Pregnant designer Taylor (center) happily showed off her baby bump as she posed with some of the models from the presentation