If there are any disbelieving children out there who don’t believe in Father Christmas, a new scientific study could change their mind.

Physicists say Santa’s sleigh could potentially fly if it had a few major modifications, including a pair of wings similar to those on a commercial aeroplane.

Santa’s sleigh would need an engine with the equivalent thrust to that produced by NASA’s Saturn V rocket or 150 Boeing 747-400 airliners, they’ve calculated.

Physicists say Santa’s sleigh could potentially fly if it had a few major modifications, including a pair of wings similar to those on a commercial aeroplane and an engine with the equivalent thrust to that produced by NASA’s Saturn V rocket or 150 Boeing 747-400 airliners

Santa’s sleigh could fly…with these features

– Wings from a commercial liner

The study was written by physics students at the University of Leicester, inspired by a scene in the 2003 movie Elf, in which Santa Claus has to rely on a jet engine to power his sleigh.

It was published in the Journal of Physics Special Topics, a journal specifically for Leicester undergraduates to showcase their work.

‘We have concluded that Santa’s jet engine must be extremely powerful and as a result he and the elves must have access to advanced technologies,’ said Ryan Rowe, one of the student authors of the paper at Leicester.

‘Santa must have had access to a new type of jet engine technology capable of replacing the effects of Christmas spirit.’

The students aimed to create a simple model that applied some basic physics concepts to the problem of keeping a sleigh in flight.

They assumed Santa has a 19th century British naval sled weighing 635kg, modified with a pair of wings from a Boeing 747 attached either side. 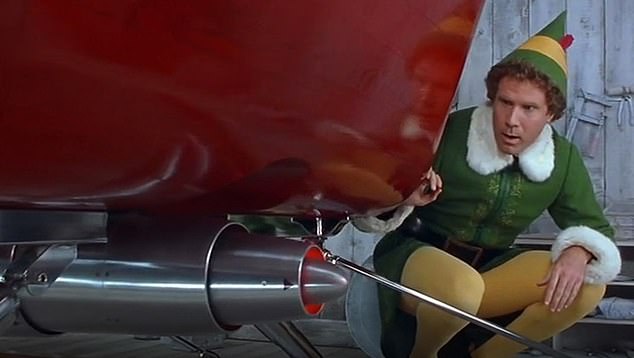 The study was inspired by a scene in the 2003 movie Elf starring Will Ferrell, in which Santa Claus has to rely on a jet engine to power his sleigh (pictured) 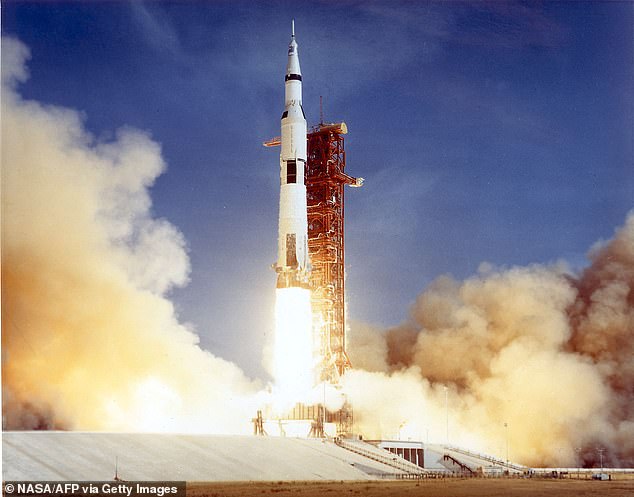 Rudolph couldn’t have led Santa’s sleigh because reindeer are colourblind and would not be able to see the light from his crimson snout.

That’s the finding of scientists who have revealed the Lapland dwelling creatures lack the colour-detecting eye cells that humans use to see shades of red.

They are also unable to see orange and green, meaning the animals might struggle to spot any carrots left out for them under the Christmas tree.

The students calculated the thrust required for Santa’s sleigh to remain in flight during his ambitious sojourn on Christmas Eve, as well as how powerful that jet engine would have to be.

For Santa’s sleigh to remain in level flight, the weight of the sleigh must be balanced by the lift – when air flows over a wing at lower pressure than the air flowing under it.

Accounting for the weight of all the presents for the ‘nice’ children in the world, they calculated the sleigh must move at 12,300 miles per hour to generate enough lift.

An engine powering the sleigh at that speed would need to provide enough thrust to not only stay at that speed, but also balance the effect of air resistance, which would be greater at high speed.

They worked out that this would require 38 million newtons of thrust – roughly equivalent to 150 Boeing 747-400 engines or the Saturn V rocket used for the Apollo missions during the 1960s and 1970s.

While this is one of the more light-hearted research papers, it offers a handy form of proof for parents to offer their to disbelieving children.

It shows that Santa’s sleigh could theoretically exist and fly – with some modern technological upgrades. 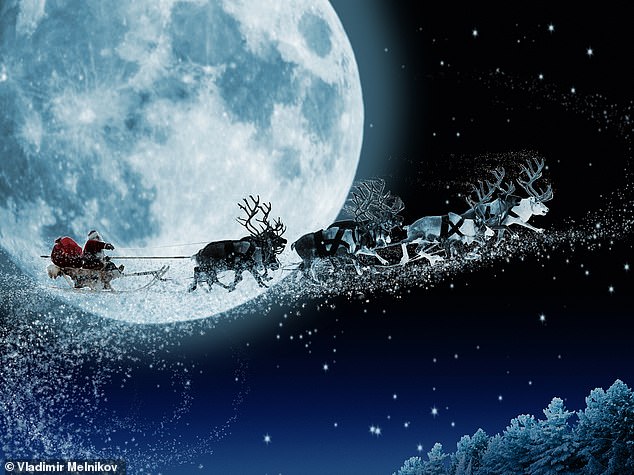 Students at Leicester have previously suggested several theories to account for Santa’s festive feats, including calculating the speed required to deliver all his presents in one night.

The university’s Journal of Physics Special Topics lets undergraduate physics students to learn about the process of peer review by writing and reviewing papers by applying theoretical concepts to light-hearted ideas.

‘The process that the students go through mimics that of real research physicists working on exciting topics from black holes to cancer treatment,’ said Professor Mervyn Roy, director of education for Leicester’s School of Physics and Astronomy.

‘We have to investigate new problems and approach their solution in a creative way, we have to clearly communicate our findings, and these results are checked by fellow scientists as part of the peer-review process.’

How to spot ‘Santa’ in the night sky next week: International Space Station will be visible to the naked eye as it passes over the UK on Christmas Eve

If you don’t manage to catch a glimpse of a reindeer-towed sleigh soaring over your house on Christmas Eve, there is another ‘Santa’ you can look out for.

NASA has revealed that the International Space Station (ISS) will be visible to the naked eye on 24 December, as it passes over the UK. 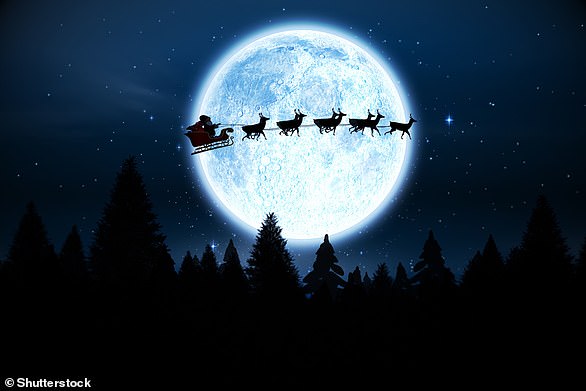 Keeping the magic of Santa alive is something parents around the world do for their children every Christmas, and NASA suggests looking up tonight to ‘see him fly’

The space agency says that the spacecraft ‘is the third brightest object in the sky and easy to spot if you know when to look up’.

And, while it’s not the man in red, the ISS may make a good alternative for the big and small kids who will be looking out for him.