Sarah Harris has apologised for using the wrong pronoun when referring to Elliot Page while discussing the actor coming out as transgender on Wednesday.

The Studio, 39, issued the apology on national television on Thursday after admitting the topic on Studio 10 the day before was ‘confusing’ and she had a ‘brain snap’.

The Oscar-nominated actor, who is known for his roles in Juno and The Umbrella Academy, came out as a transgender man on Instagram on Wednesday. 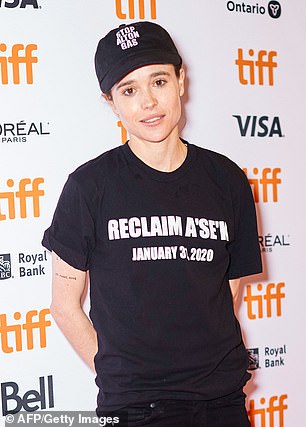 ‘It was just a brain snap’: Sarah Harris, 44, (left) has apologised for using the wrong pronoun when referring to Elliot Page while discussing the actor coming out as transgender on Wednesday

Sarah apologised for her initial reaction at hearing about Elliot’s news as she ‘completely got flustered around the pronouns’ and ‘made a joke.’

‘I need to apologise for my reaction that I had yesterday when you first announced the news about Elliot Page. I completely stuffed up the pronouns,’ she said.

‘I got flustered and tried to make a joke and move on. Looking back that was pretty insensitive. It was a genuine mistake and I’m so sorry. Yeah, I’m just… I’m sorry. It was a brain snap.’ 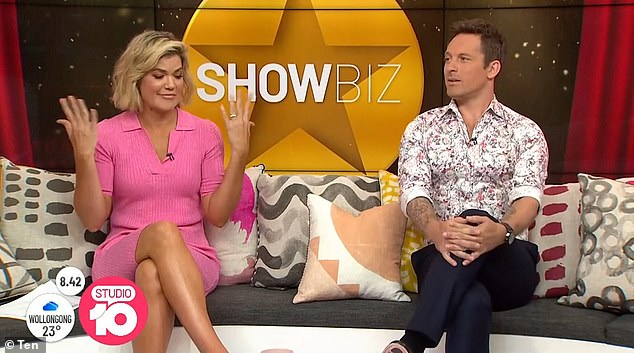 ‘It was just a moment’: Sarah apologised for her initial reaction at hearing about Elliot’s news as she ‘completely got flustered around the pronouns’ and ‘made a joke’. Pictured with Studio 10 co-host Tristan MacManus

‘A lot of people say ‘don’t apologise’ but I felt really lousy and I’d hate anyone to feel like I was attaching them in that way. It was just a moment. I’m really sorry.

This week, the Oscar-nominated actor, 33, took to social media to share his transition with the world, telling the public: ‘I feel lucky to be writing this. To be here. To have arrived at this place in my life.’

Page – who has been married to dancer Emma Portner, 26, since 2018 – took to Twitter on Tuesday morning to share an emotional statement with his revelation, writing: ‘Hi friends, I want to share with you that I am trans, my pronouns are he/they and my name is Elliot.

‘I feel lucky to be writing this’: Page – who has been married to dancer Emma Portner, 26, since 2018 – took to Twitter on Tuesday morning to share an emotional statement with his revelation

‘I feel lucky to be writing this. To have arrived at this place in my life.’

Elliot, who received an Oscar nod for his role in the hit 2008 movie Juno, asked his followers and fans for ‘patience’, admitting that he is ‘scared’ of the ‘invasiveness, the hate, the jokes, and of the violence’ that he may face moving forward.

‘My job is real, but it is also fragile,’ the actor said, adding: ‘The truth is, despite feeling profoundly happy right now and knowing how much privilege I carry, I am also scared.’

Changes: As well as releasing his statement, Elliot also updated his social media accounts, changing his usernames, and adding a new profile picture (above) to his Twitter and Instagram

Elliot, who is currently due to begin filming the third season of Netflix hit The Umbrella Academy in February, also unveiled changes to his official social media accounts, posting on Twitter under the username @TheElliotPage, and on Instagram as @elliotpage.

He thanked his loved ones for their support through his journey, expressing his ‘overwhelming gratitude’ for helping him to reach a stage where he felt comfortable to ‘pursue his authentic self’.

Shortly after the actor posted the statement, his wife Emma voiced her public support for him on Instagram, while reiterating her partner’s plea for patience.

Emotional: Elliot’s wife Emma took to Instagram shortly after the actor shared his statement to offer public words of support, writing, ‘Shine on sweet E. Love you so much’

‘I am so proud of @elliotpage. Trans, queer and non-binary people are a gift to this world,’ Emma wrote

‘I also ask for patience & privacy [and] that you join me in the fervent support of trans life every single day. Elliot’s existence is a gift in and of itself. Shine on sweet E. Love you so much.’ 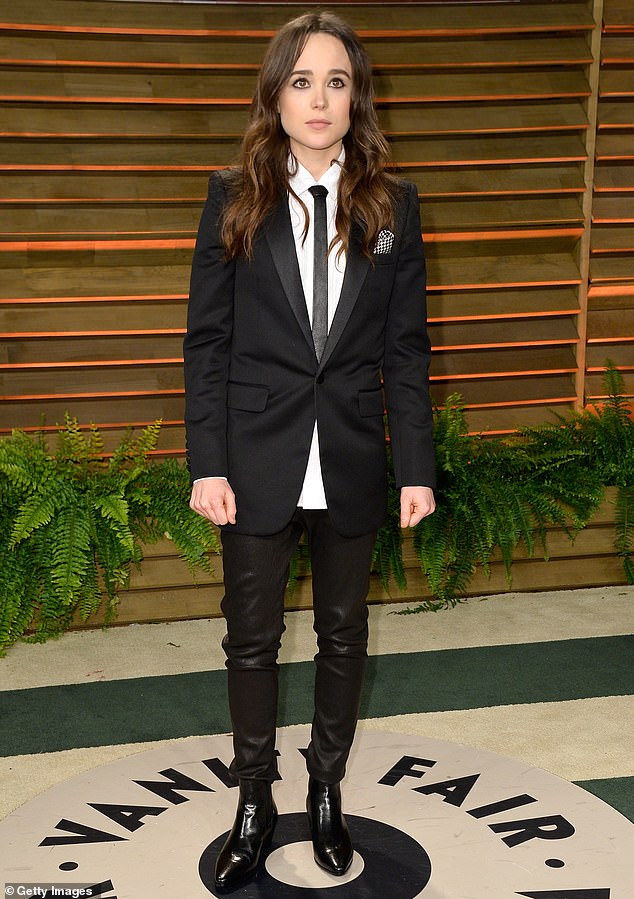 Star: Elliot (seen in March 2014) thanked his loved ones for their support through his journey and gave credit to the trailblazers in transgender community

Elliot’s decision to publicly reveal he is transgender comes almost three years after the couple tied the knot in a secret ceremony, having only been dating publicly for six months.

Prior to their relationship, Juno star Elliot had been linked to several different partners, both male and female, including Big Little Lies star Alexander Skarsgård and actress Shailene Woodley – although their romance was never confirmed.

He also dated artist Samantha Thomas for 18 months, with the couple splitting just months before Elliot tied the knot with Emma.

Elliot came out publicly as gay in 2014 in an emotional speech at the Human Rights Campaign’s Time to Thrive conference for LGTBQ youth.

In the speech, the actor shared that he hoped his news would help others struggling with their sexuality, saying: ‘I’m here today because I am gay. And because maybe I can make a difference.’

Prior to transition, Page was one of the most visible out gay actors in Hollywood; his latest announcement further enriches his legacy, and adds him to a small but growing number of trans creators and stars who have made the decision to come out publicly, including performers like Laverne Cox, Trace Lysette, and Brian Michael Smith, and creators including The Wachowski Sisters. 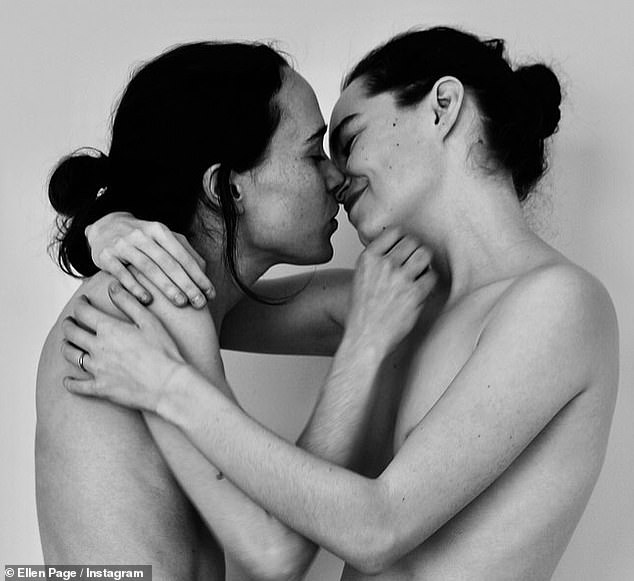 Standing together: Emma commented on Elliot’s Instagram statement to once again voice her support for her spouse. The pair are pictured together in a photo shared to mark Pride 2019