Press Secretary Sarah Huckabee Sanders slammed Hillary Clinton from the podium for a second day in a row, this time over the ex-Democratic nominee saying President Trump wasn’t being a president to all Americans.

‘And is, instead, pushing a book with a lot of false narratives and a lot of false accusations and placing blame on a lot of other people instead of accepting it herself,’ she said.

When a reporter followed up and asked the press secretary to pinpoint what parts of Clinton’s new book, What Happened, were factually inaccurate, Huckabee Sanders made a blunt statement and moved on.

‘I think probably the biggest one is any place in the book where she lays blame for the loss on anyone but herself,’ Huckabee Sanders said. 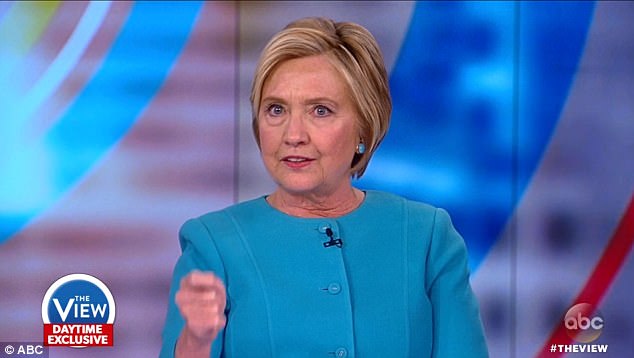 On The View Wednesday, Hillary Clinton said she was ‘disappointed’ in President Trump’s performance thus far, though hoped he could learn to be a president for ‘the entire country’ 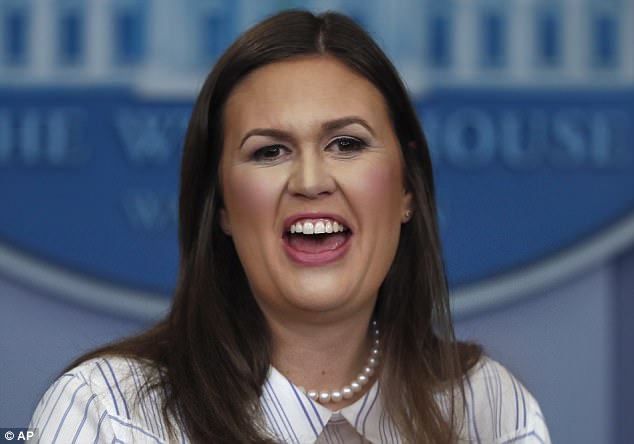 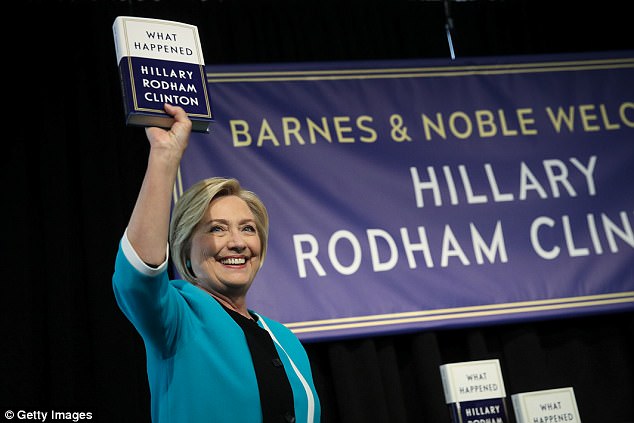 Hillary Clinton holds up a copy of her new book What Happened. President Trump doesn’t need to read it, his press secretary said Tuesday, because ‘he’s pretty well versed on what happened’

Wednesday marked day No. 2 of Clinton’s book being out and the former secretary of state continued on in her media blitz.

On The View she remarked that she was ‘disappointed’ in what she had seen from Trump thus far, especially in his dealings with racial violence in Charlottesville.

‘But I also hope – hope springs eternal,’ Clinton remarked. ‘I hope there can be a greater understanding of what it means to be president for the entire country.’

That particular quote was what Huckabee Sanders was asked about today.

Yesterday she was simply asked, by Yahoo’s Hunter Walker, if President Trump planned to read his ex-rival’s book.

‘But I would think that he’s pretty well versed on what happened,’ she said, snarking at Clinton’s book title.

‘I think it’s sad that after Hillary Clinton ran one of the most negative campaigns in history and lost, the last chapter of her public life is going to be now defined by propping up book sales with false and reckless attacks,’ Huckabee Sanders said. ‘And I think that’s a sad way for her to continue.’

On Monday, Clinton had sat down with USA Today and said she believed there was Russia and Trump campaign collusion.

‘And there’s no doubt in my mind that the Trump campaign and other associates have worked really hard to hide their connections with Russians,’ the former secretary of state added.

Beyond this charge, Clinton labeled Trump a ‘creep’ in the book and said he made her ‘skin crawl’ when he got too close to her at the second presidential debate.

On The View Wednesday she expanded upon this story, saying her fill-in for Trump during debate practice, Philippe Reines, had practiced ‘stalking’ her onstage and ‘saying really nasty things to me.’

While the White House has lashed out at Clinton for her anti-Trump remarks, a lot of the focus on her book has been because of her criticism of fellow Democrats.

She hit back at former Vice President Joe Biden who had suggested she hadn’t made enough of an effort with working people, pointing out that he had stumped for her.

In her book and on her media tour she’s lashed out at Sen. Bernie Sanders and his supporters for not fully coming into the Democratic Party’s fold.

On an episode of the Pod Save America podcast, released Tuesday, Clinton talked about how much better she treated President Obama, after losing to him in the Democratic primary in 2008, than how Sanders and his ilk treated her.

‘I didn’t get anything like that respect from Sanders and his supporters,’ she told the hosts, who had worked in President Obama’s White House.

‘And it hurt, you know, to have basically captured the nomination, ending up with more than 4 million votes than he had – but he dragged it out,’ she said of her primary rival.

Democrats are split on whether Clinton should be airing out her party’s dirty laundry.

A new Rasmussen Reports poll has 54 percent of Democrats saying she 54 percent saying there’s still a future for her in public life, while another 36 percent said she should retire.

‘The best thing she could do is disappear,’ a former Clinton fundraiser told the Hill newspaper last week. ‘She’s doing harm to all of us because of her own selfishness. Honestly, I wish she’d just shut the f*** up and go away.’

That particular source’s comments are more in line with the majority of the country – 61 percent said she should retire – and Republicans like Huckabee Sanders, with 83 percent of GOP likely voters saying it’s time to step out of public life.