Sarah Palin hit back at critics who slammed her daughter Bristol for promoting a controversial weight loss tea with a snapshot of herself showing off her tiny frame in a sports bra and leggings.

Bristol, 28, has been a Teami partner for years and most recently credited the brand’s skinny tea with helping her lose weight after giving birth to her third child, Atlee Bay, in 2017.

The mother-of-three’s Instagram page is filled with pictures of her posing with her Teami tumbler, often with her children. In her latest post, she is flashing her trim stomach while holding up her sponsored beverage.

Slinging skinny tea: Bristol Palin, 28, took to Instagram on Wednesday to share a photo of herself showing off her thin frame in a sports bra and leggings while holding a Teami tumbler 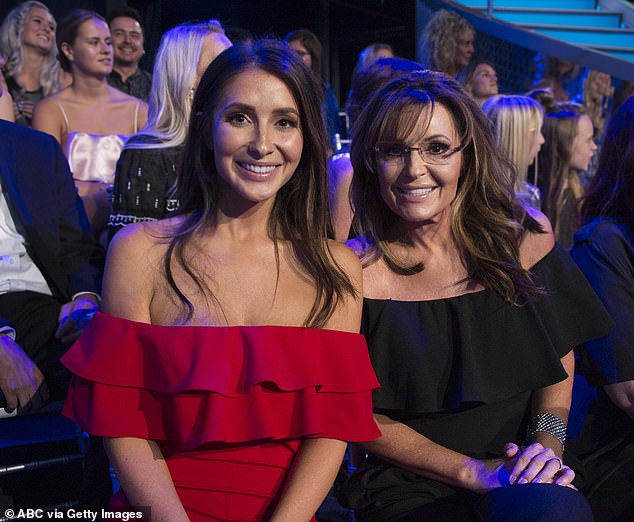 Hitting back: Bristol’s mother Sarah Palin (right) leaped to her defense when critics slammed her for promoting a controversial weight loss tea

‘You all know that I love being a #teamipartner but omgggg, I’ve been drinking this @teamiblends butterfly tea recently, and I am officially obsessed,’ she wrote. ‘All the ingredients are so good for you and it is delishhhh!!

‘The butterfly pea flower is amazing for so many things – like improving digestion – and has so many antioxidants that it can help prevent premature aging (I’ll report back in a few). I love this blend with a little honey, and it gives me such a great pick me up in the afternoon.’

‘Oh lord,’ one critic wrote, causing a firestorm in the comments section of the post.

‘I just think it’s sad when people promote these products. 1) I’m sure she works hard to look this great and 2) they are a complete waste of money and 100% ineffective,’ the woman explained.

When someone sarcastically thanked her for her ‘expert opinion,’ the Instagram user went on to accuse Bristol of Photoshopping her image to make herself look thinner. 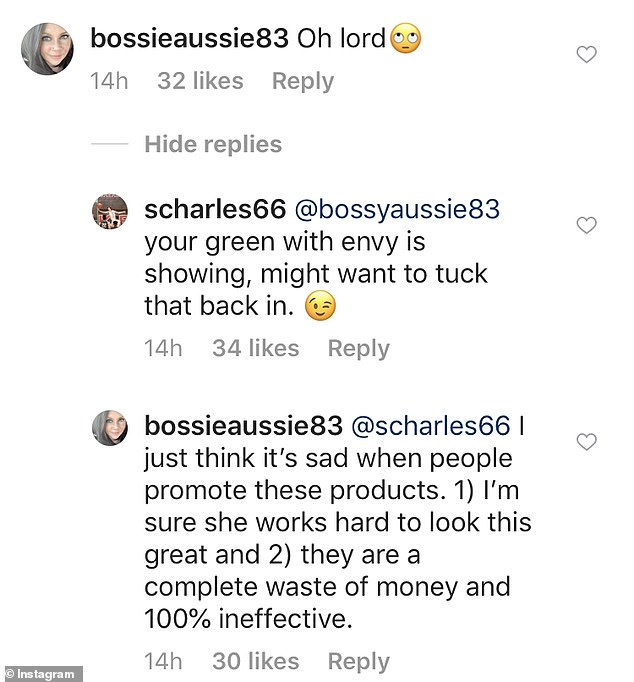 Critic: One woman started a firestorm in the comments section when she wrote, ‘Oh lord.’ She went on to say one woman say the tea is a ‘complete waste of money and 100% ineffective’ 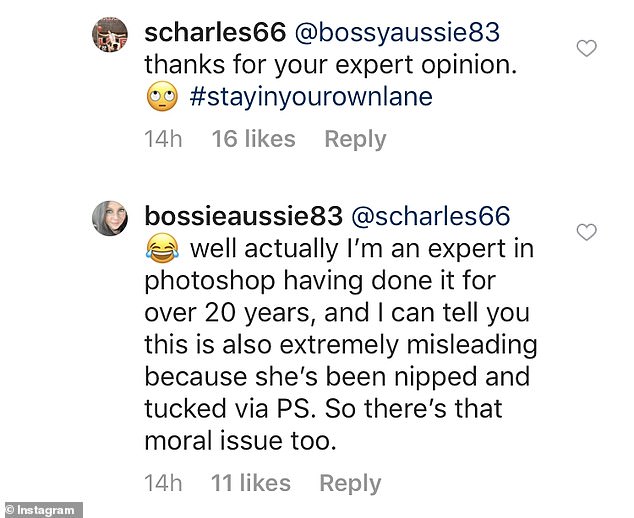 Fighting words: When someone sarcastically thanked her for her ‘expert opinion,’ the Instagram user went on to accuse Bristol of Photoshopping her image to make herself thinner 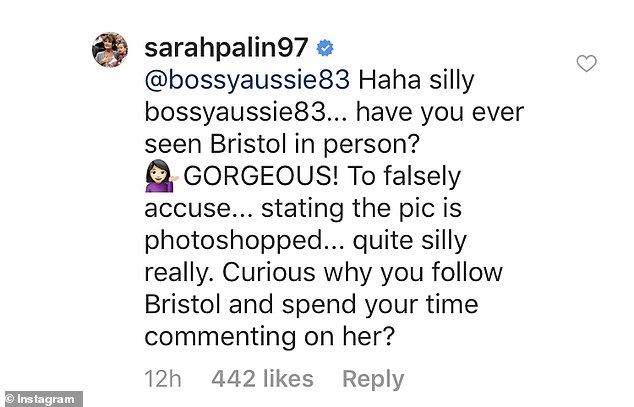 Mom to the rescue: Sarah, 55, swiftly defended her eldest daughter and asked the woman why she follows Bristol in the first place 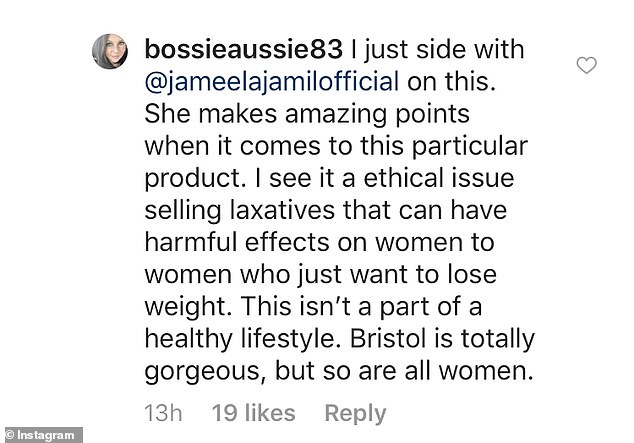 Inspired: The woman referenced actress Jameela Jamil in her counterargument. The Good Place star has made it her personal mission to call out stars who sling weight loss products

‘Well actually I’m an expert in photoshop having done it for over 20 years, and I can tell you this is also extremely misleading because she’s been nipped and tucked via PS. So there’s that moral issue too,’ she added, prompting Sarah to leap to her eldest daughter’s defense. 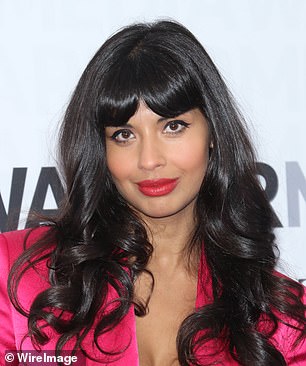 Taking a stand: Jameela, 33, has slammed the Kardashians as well as Cardi B and Iggy Azalea for promoting weight loss products

‘Haha silly bossyaussie83… have you ever seen Bristol in person? GORGEOUS! To falsely accuse… stating the pic is photoshopped… quite silly really,’ the 55-year-old wrote. ‘Curious why you follow Bristol and spend your time commenting on her?’

Sarah also commented on several other posts that have since been deleted, calling her daughter ‘athletic,’ ‘healthy,’ and ‘beautiful.’

Celebrities have been getting flack for touting ‘detox’ teas for years, and actress Jameela Jamil has made it her personal mission to call out stars who sling weight loss products and drinks — including Teami’s — for money.

Jameela, 33, has repeatedly slammed the Kardashians as well as Iggy Azalea and Cardi B for promoting weight loss products, earning a slew of fans who are grateful for her commentary. 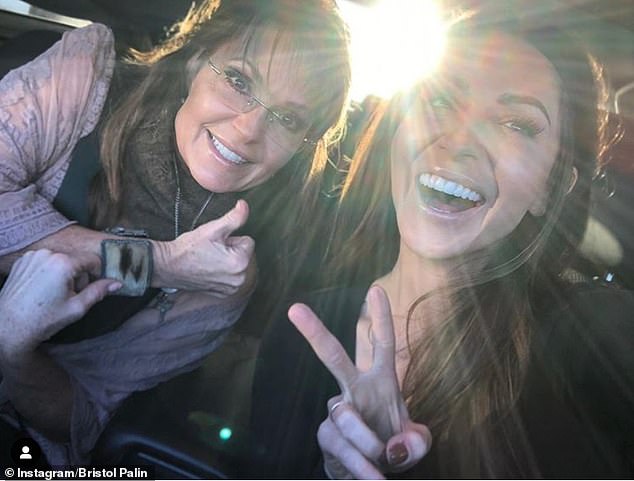 Proud mom: Sarah, who is also a Teami partner, commented on several other posts that have since been deleted, calling her daughter ‘athletic,’ ‘healthy,’ and ‘beautiful’ 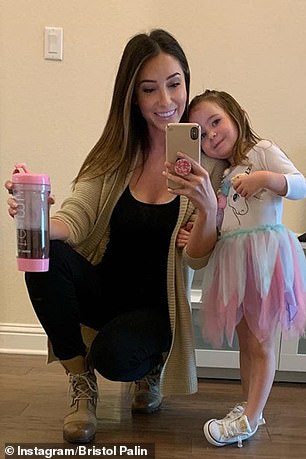 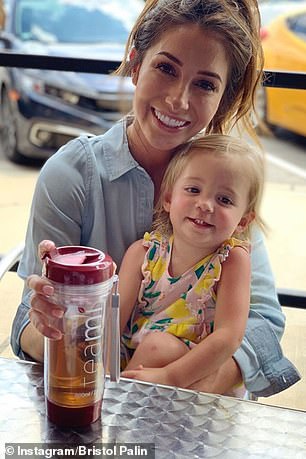 Family effort: The mother-of-three’s Instagram page is filled with pictures of her posing with her Teami tumbler, often with her daughters Sailor Grace (left) and Atlee Bay (right) 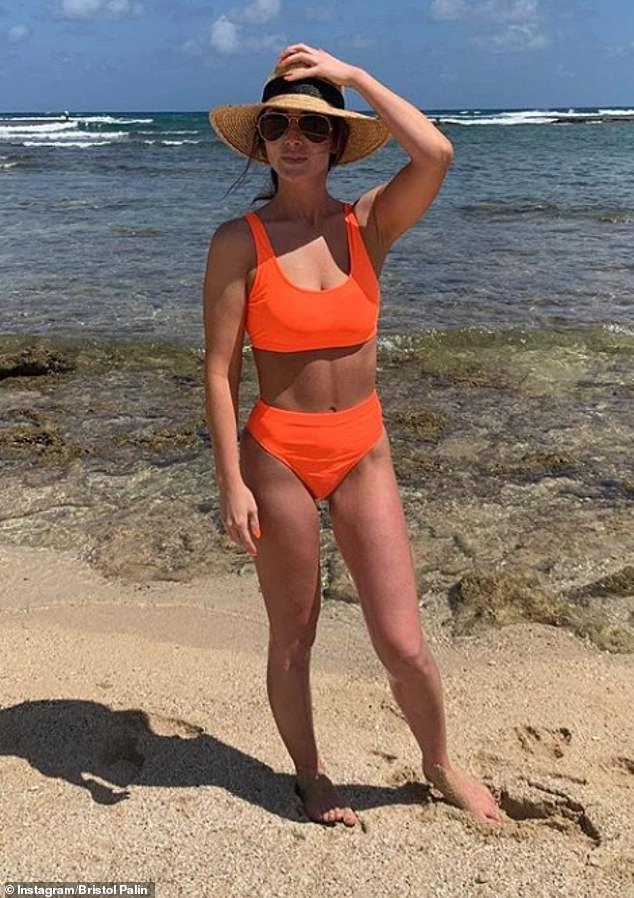 Bikini body: Bristol credited the brand’s skinny tea with helping her lose weight after giving birth to Atlee in 2017

The woman who called out Bristol for her post actually referenced The Good Place star in her counterargument.

‘I just side with @jameelajamilofficial on this. She makes amazing points when it comes to this particular product,’ she wrote. ‘I see it [an] ethical issue selling laxatives that can have harmful effects on women to women who just want to lose weight. This isn’t a part of a healthy lifestyle. Bristol is totally gorgeous, but so are all women.’

The woman went on to reference nutritionist Lisa Drayer who was quoted in a CNN article about ‘detox’ teas like Teami’s last summer.

‘If you take a really close look at it, these teas are just a bunch of herbs,’ she said. ‘Some contain caffeine; others may function as a diuretic or laxative.

‘And so any of the weight loss that occurs is due to water weight, and it would quickly be regained once people either stop [drinking] the tea or start hydrating again.’ 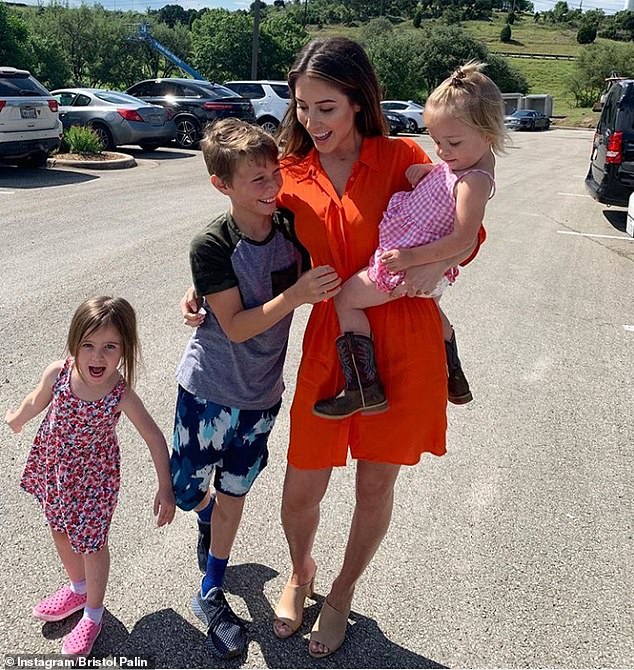 Family: Bristol and her ex-husband Dakota Meyer are parents to Sailor, three, and Atlee, two. She is also mom to a 10-year-old son, Tripp, her only child with her former fiancé Levi Johnston 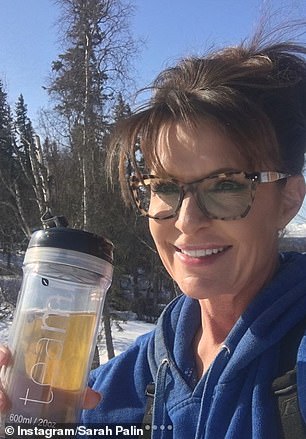 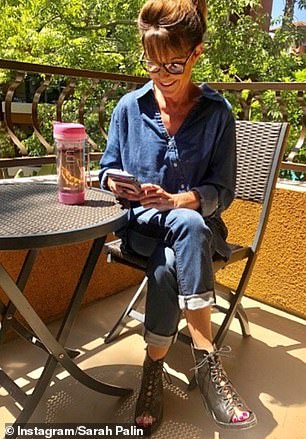 From politician to influencer: Bristol’s mom Sarah is also a Teami partner, and she was mercilessly mocked on Twitter when she shared these photos last year

Despite experts’ warnings that detox teas are not a quick solution for weight loss, some fans took to the comments section of the post to say that had used Bristol’s code to try out the tea for themselves.

Back in September, Bristol claimed she was setting a healthy example for her three children by drinking the tea instead of sugary drinks.

‘I’ve been trying to set a better example for my kids by making healthier decisions with fitness and diet!’ she captioned an image of herself holding her Teami tumbler while posing with her eldest daughter Sailor Grace.

Bristol and her ex-husband Dakota Meyer have two young daughters, Sailor, three, and Atlee, two, and she is also mom to a 10-year-old son, Tripp, her only child with her former fiancé Levi Johnston.

THE HEALTH DANGERS OF DETOX TEAS

One of the most popular ingredients for ‘detox’ teas is senna leaf, used in teas promoted by Demi Lovato, Cardi B, Kylie Jenner and others.

Brands promote the herb as a natural ‘cleanse’ to wash out your toxins.

It is actually an FDA-approved laxative to treat constipation, or to clear the bowels before a colonoscopy.

Various medical boards have warned against using the herb for a prolonged period of time, including the National Institute of Diabetes and Digestive and Kidney Diseases, the American Herbal Products Association, and the American Cancer Society.

They warn senna’s active components, the chemicals glycosides and sennosides, irritate the lining of the colon, causing muscle contractions.

For people with chronic constipation or irritable bowel syndrome, the product can help to retain fluid in the gut, soften stool and stimulate bowels movement.

However, this stimulates a process that may not be ideal for otherwise healthy people looking for a boost.

As the herb stimulates the bowels, it can trigger gas, chronic bloating, cramping and chronic diarrhea.

Women are told to avoid senna leaf throughout pregnancy and their nursing period.

Physicians also warn against drinking the herb if you have experienced extensive bloating, abdominal pain or bowel issues.

Kylie Jenner, Demi Lovato, and Blac Chyna, are among the celebrities who have shared similar endorsements for the brand, and Bristol isn’t even the only Palin who touts it.

Last year, Sarah shocked many people when she shared her own post about Teami.

Although the former Republican vice presidential candidate was mercilessly mocked for the promotional post, she continued to join her daughter and endorse the brand on social media as a ‘Teami partner.’

At the time of Sarah’s first Teami post, the brand’s social media manager Carly Halvin told CNN in an email that Sarah has been a customer of the brand since 2016.

‘Her and her family all use and love Teami Blends,’ the person wrote. ‘We are very lucky that she chose to share her Teami experience with her audience.’

However, CNN reported that the Teami rep did not answer a question about whether Sarah was paid for the post.