Sarah Sanders and Mike Huckabee defend Trump on The View

On The View Wednesday, the country’s two most famous Huckabees – White House Press Secretary Sarah Huckabee Sanders and her father, former Arkansas Gov. Mike Huckabee – were peppered with questions on how they could defend President Trump.

During one of the talk show’s lighter moments, co-host Sara Haines asked the political duo, ‘What were you thinking when President Trump looked directly into the eclipse?’

‘Maybe he has superpowers we don’t know about,’ Huckabee Sanders said jokingly, as her father simply laughed.

For most of the segment, the press secretary and her father, a former Fox News host, were asked how they could get behind Trump, characterized, at times, as a sexist, a racist, a liar and someone evangelicals shouldn’t support. 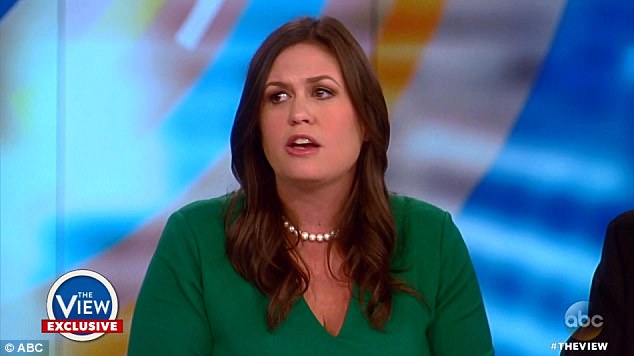 In defending President Trump against sexism charges, Sarah Huckabee Sanders pointed to the fact that he has a female press secretary and a female communications director, a history-making duo 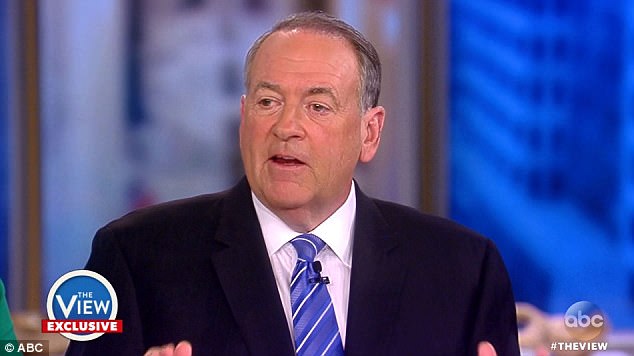 Former Gov. Mike Huckabee explained to the group how evangelicals could get behind Trump, acknowledging that the president is no ‘Sunday school teacher’ 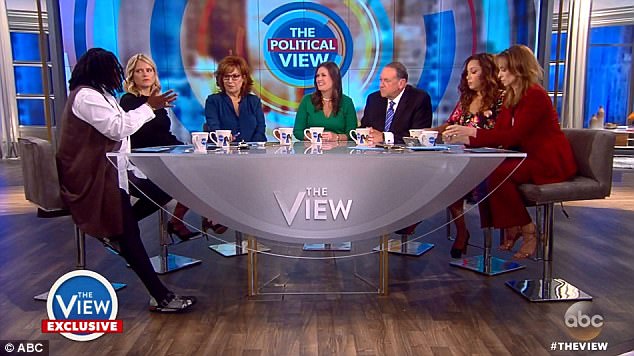 THE VIEW HEARTS HUCKABEES: While the father and daughter were asked a number of questions on how they could defend Trump, Joy Behar (third from left) named Sarah Huckabee Sanders (middle) and Mike Huckabee (third from right) among her favorite Republicans 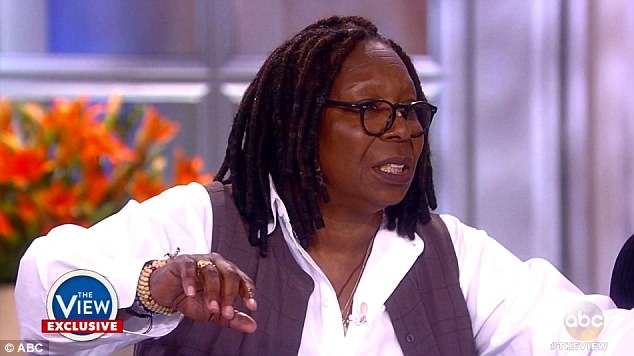 Co-host Whoopi Goldberg (pictured) said that she’s personally called out President Trump for being a racist, as she peppered the Huckabees with questions on how they can support him

Huckabee Sanders pointed to herself as the ultimate example that proved Trump wasn’t sexist.

‘You often hear the line personnel is policy, you pointed out yourself that I’m the first working mother to ever hold this job,’ the press secretary said. ‘To be empowered to be the spokesperson for the United States of America through the president, this is a big deal, that is a huge step forward and instead of liberals celebrating it, they attack me at every step.’

She also pointed to the ascension of Hope Hicks, who’s currently in the role of White House communications after Anthony Scaramucci was fired after a brief tenure.

‘He doesn’t just put milquetoast women around him, he puts strong, very outspoken women in very powerful positions and in the first time in history we also have a female communications director,’ Huckabee Sanders said pointing to Hicks.

You’ve never had a female press secretary and a female communications director, ever in the history of the White House and we do in this one,’ she noted.

‘He’s given my daughter an incredible opportunity,’ Huckabee answered.

Huckabee, a former pastor, also explained how evangelicals got in line behind Trump.

‘It’s not that difficult. Nobody voted for him to be their Sunday school teacher,’ Huckabee answered.

‘He is a defender of religious liberty, which means he doesn’t have to embrace everything that I personally embrace in order to believe that people of faith should be respected and that they should not be relegated to a portion of the culture,’ Huckabee added.

As for the racism charge, Huckabee pointed out, ‘He’s been on this show many times.’

‘And I said it to him to his face,’ co-host Whoopi Goldberg retorted, receiving applause from the audience.

Huckabee  Sanders earned her own applause from the studio audience when she defended Trump from co-host Joy Behar who claimed that 95 percent of what the president said was a lie.

‘I think that is one of the dangers we have right now is that we are pushing so many false narratives every day, we are creating false perceptions about the president and, frankly, inhibiting his ability to succeed,’ Huckabee Sanders said.

‘I think American should want him to succeed,’ she stated, gaining claps.

Her father bemoaned the fact that some Americans will criticize Trump no matter what he does.

‘There’s so much Trump hate out here that if he took a drinking straw and sucked out every drop of flood water from Houston and spit it into the Gulf of Mexico they would have said he should have spit it into the Indian Ocean,’ the ex-governor said.

His daughter also suggested that people should aim their ire elsewhere, especially on the topic of DACA – Deferred Action for Childhood Arrivals – which Attorney General Jeff Sessions announced Tuesday would be rescinded, with President Trump encouraging Congress to act.

‘A lot of people are protesting Trump Tower,’ she stated. ‘I think they should go protest the United States Capitol because those are the people who have the ability to actually make laws.’

In Washington on Tuesday, most protests took place on Pennsylvania Avenue, in front of the White House.

Despite the heavy criticism of Trump coming from co-hosts like Goldberg and Behar, the Huckabees were treated courteously by the group.

Behar told the audience that she had previously dubbed Mike Huckabee her ‘favorite Republican.’

But with a younger Huckabee making political waves, Behar’s preference had seemingly changed.

‘She actually whispered to me that I’m now her favorite Republican,’ Sarah Huckabee Sanders admitted with a laugh.