Many in isolation are desperate for travel. I, meanwhile, have been travelling in order to find isolation.

Inspired by a 13th-century Cistercian wall at the bottom of my garden in Norfolk, a couple of years ago I began visiting some of the great religious houses of Britain and then traced the route of monasticism from the desert fathers of Egypt into Europe.

The Buddhist monasteries created another thread. All offered spiritual balm. As St Aelred, abbot of Rievaulx monastery in Yorkshire, said: ‘Everywhere peace, everywhere serenity and a marvellous freedom from the tumult of the world.’ Researching my book, The Interior Silence, I visited ten monasteries across the globe to examine different aspects of monastic wisdom. Some are harder to reach than others, but each has its own beauty.

The Basilica of St Francis of Assisi in Umbria, Italy. It is worth seeing for the Giotto frescoes following the life of Francis

Assisi in Umbria is a well-trodden route, attracting about five million pilgrims a year. Francis of Assisi, the self-sacrificing friar, is an eco saint and remains hugely popular.

The Basilica is worth seeing for the Giotto frescoes following the life of Francis, but then walk or drive up into the hills to see the little friary where he lived, the slab of rock that was his bed. This was the route to happiness.

SENT FROM ABOVE: The Pinacoteca Comunale art gallery in Assisi with its ancient frescoes and canvases.

Details: Entry fees and information on attractions at visit-assisi.it. 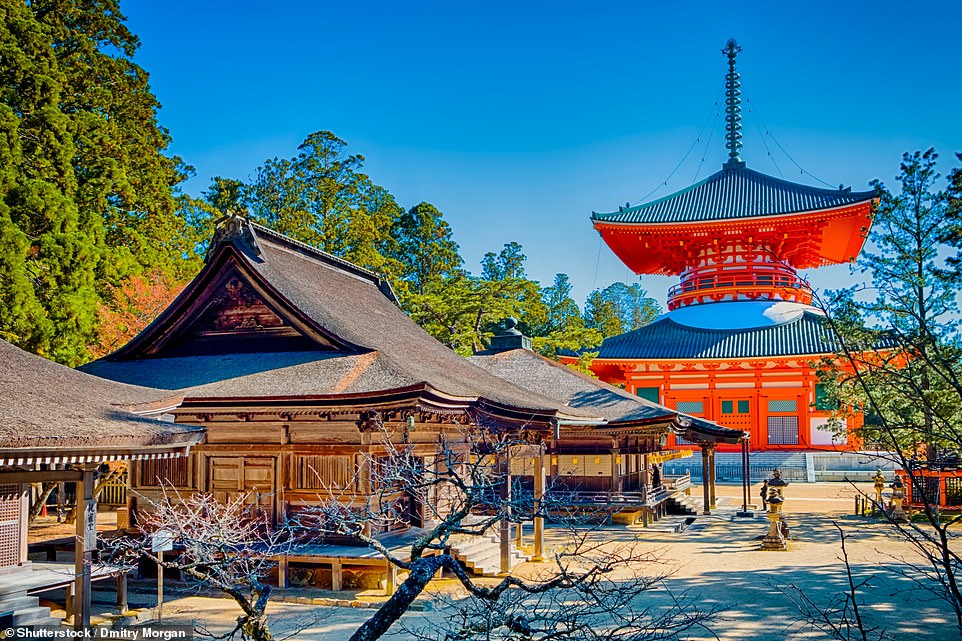 Mount Koya is the centre of Temple Buddhism in Japan. Beyond Osaka, a Hornby-style train winds through banks of bamboo trees up into the lotus-shaped mountain range. Buddhist tourists are welcome here, for the monks can mingle and even marry. The gates shut at 9pm, the rooms are sparse, the food cleansing. All designed to achieve harmony.

SENT FROM ABOVE: An evening forest walk to commune with spirits or tea ceremony lessons. 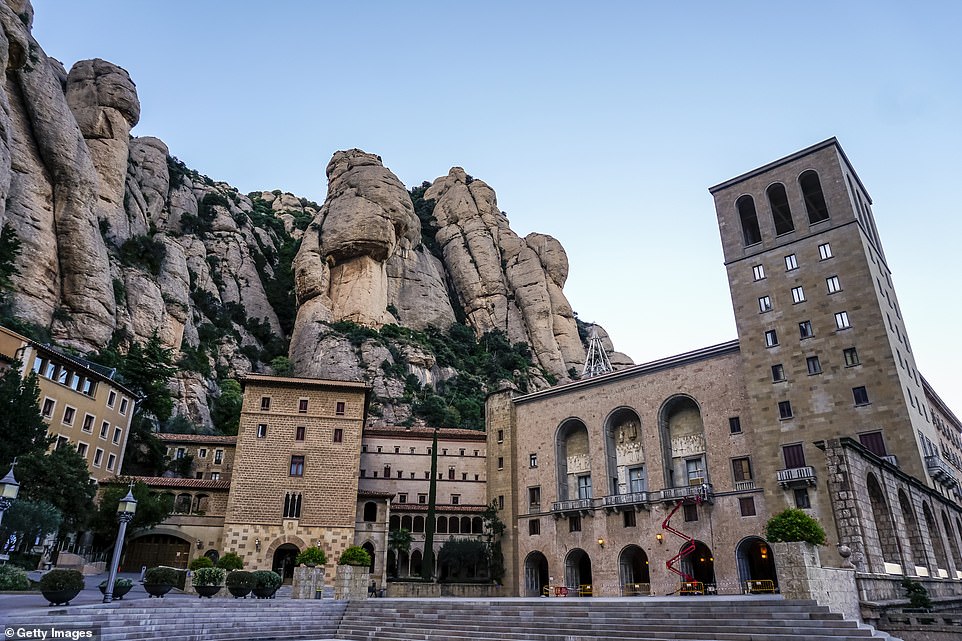 The Montserrat monastery in Catalonia, which is carved out of a mountain. Inside the monastery is the statue of the black Madonna

If you are seeking a heavenly aspect from monasteries, Montserrat in Catalonia has an otherworldliness.

The monastery is carved out of a mountain, the peaks of which are whisked into shapes both sublime and profane.

Inside the monastery is the statue of the black Madonna, said to have been found in a nearby cave. She is small and serene-looking seated on a silver throne with Jesus on her lap.

SENT FROM ABOVE: The portrait of an altar boy by Pablo Picasso at the museum or a funicular trip to the mountaintop.

DIVINE IN THE DESERT 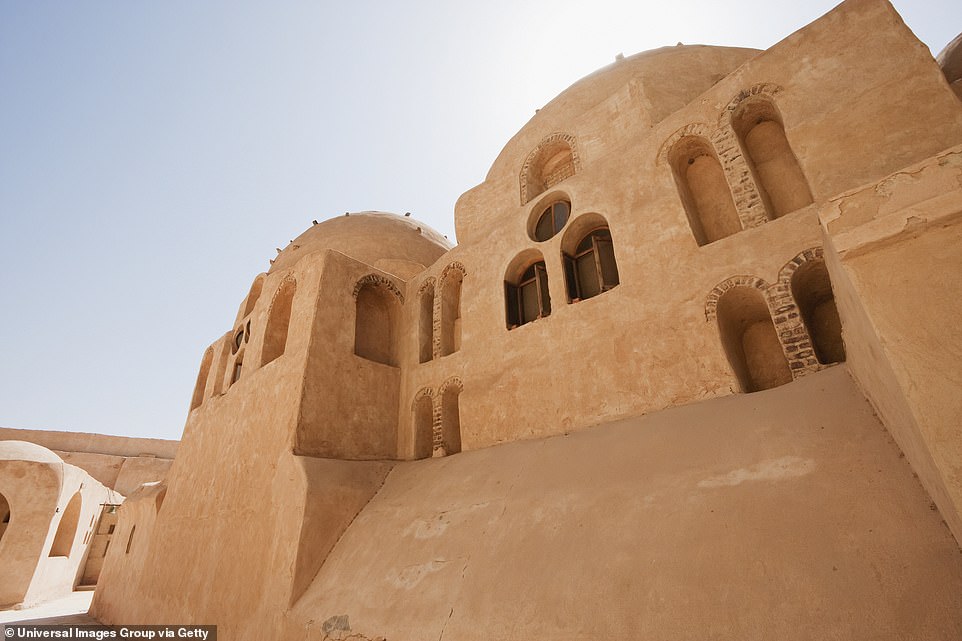 St Pishoy, pictured, is the most famous monastery in the region of Alexandria in Egypt

To follow the story of the monasteries, visit the Egyptian desert. The disciple Mark brought Christianity to Alexandria in the first century AD and Egypt became the setting for the desert fathers.

The Coptic Christians are a target for Islamic extremists so visits to the monasteries need to be carefully organised. St Pishoy, the most famous monastery in the region of Alexandria, is an hour from Cairo.

The domes and arches of its five churches rise up from the desert and its crosses are illuminated magnificently at night.

SENT FROM ABOVE: Alexandria harbour, once the site of the Lighthouse of Alexandria, a wonder of the ancient world. 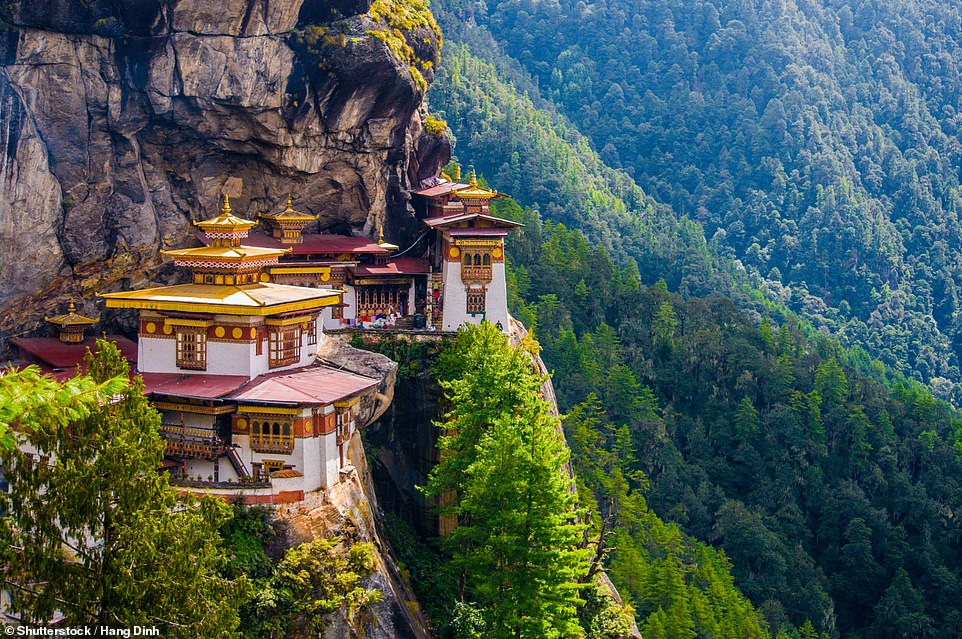 The Tiger Nest monastery, pictured, is the most well-known in the small Himalayan kingdom of Bhutan

The small Himalayan kingdom of Bhutan puts happiness ahead of economic growth — and its monks are the guardians of its set of values. Of the kingdom’s monasteries, Tiger’s Nest is the most famous, carved into a cliffside.

Meanwhile, I spent a cold and magical night at the Dodeydrak Buddhist Institute, high above Thimpu.

SENT FROM ABOVE: Look out for the biodiversity of Bhutan —the lichen that hangs in locks from the branches, the blue poppy and the rosefinch bird. 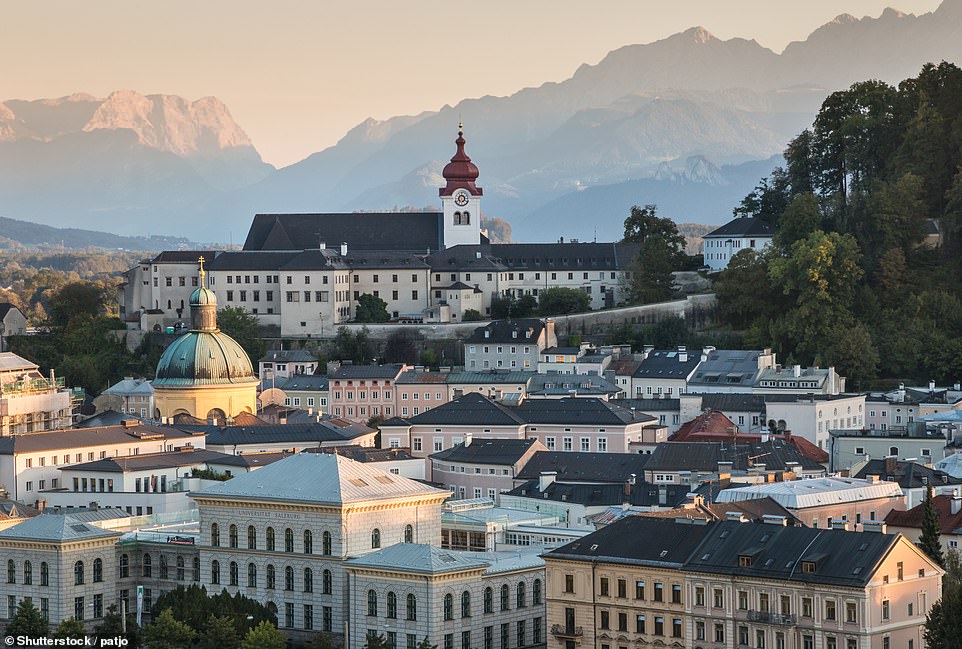 Salzburg’s Nonnberg Abbey, pictured, attracts Sound of Music-inspired tourists as the film was shot there

Sound of Music-inspired tourists flock to Salzburg, where the film was shot, making a beeline for Nonnberg Abbey.

There is still a small community of nuns and they are patient about visitors rattling the railings by the courtyard and demanding to see Maria. Entrance to the abbey is free, although it is only open periodically.

SENT FROM ABOVE: Nuns at Nonnberg sing Gregorian chorals each day at 6.45am. 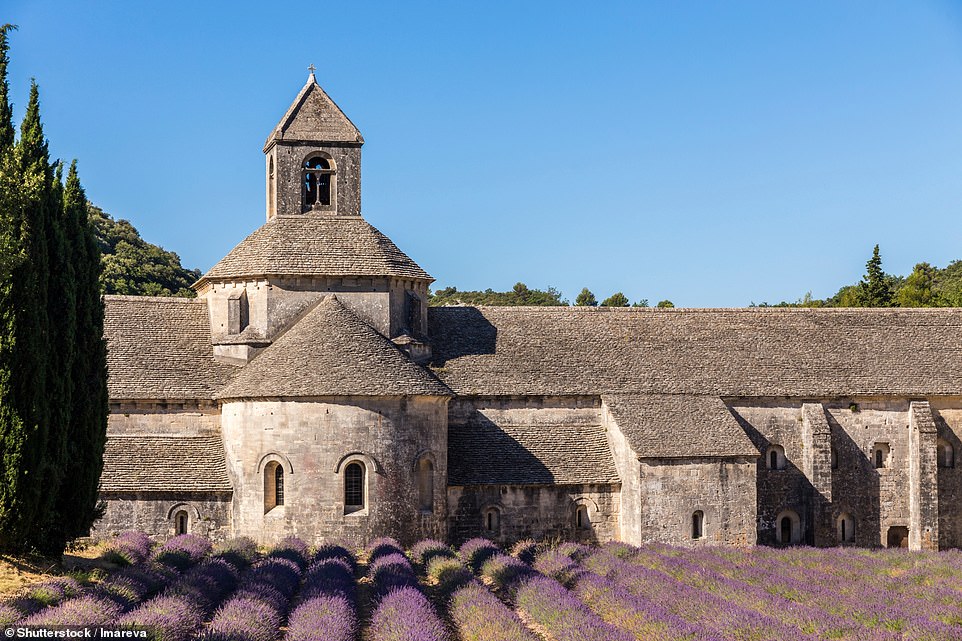 The simple stone building of the Cistercian Abbaye Notre-Dame de Sénanque, near Gordes in the South of France

France was a centre of medieval monasticism and the Cistercians, or white monks, came from Burgundy. Between lockdowns last year, I went to stay at the Cistercian Abbaye Notre-Dame de Sénanque, near Gordes in the South of France.

The simple stone and slate building is set serenely among acres of lavender.

Apart from the seven sung services a day, the monks are silent. A few paying guests are permitted to stay, quietly.

SENT FROM ABOVE: The spectacular nearby hilltop town of Gordes.

Details: To arrange a visit or stay see senanque.fr. 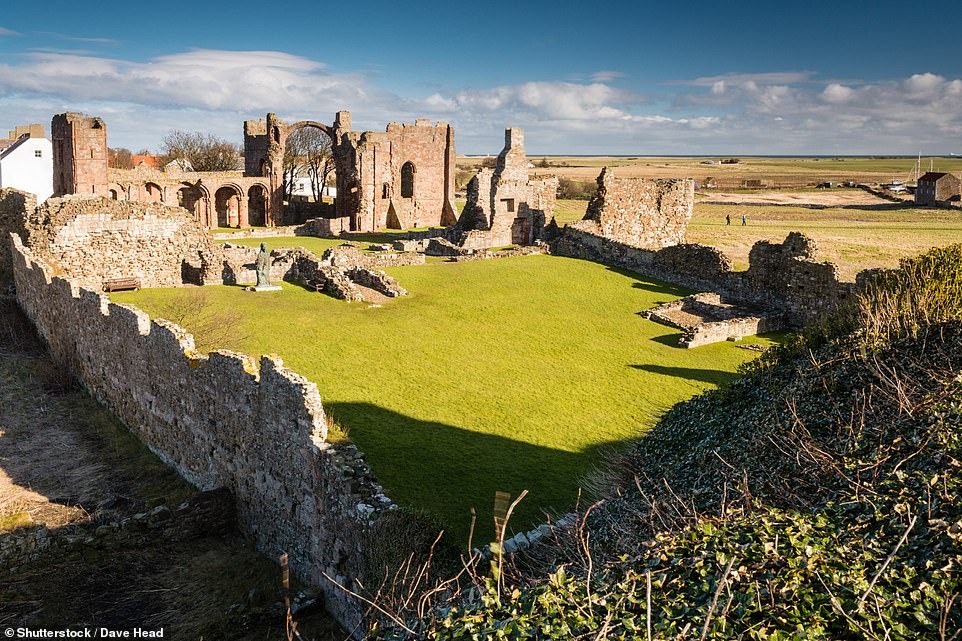 All that remains of Lindisfarne Priory in Northumberland. It was defiantly Celtic until the culture of European monasticism overwhelmed the monks

I tried to stick to living monasteries, but some from the past remain overwhelmingly spiritual.

The holy island of Lindisfarne in Northumberland is an obvious choice. It was defiantly Celtic until the culture of European monasticism overwhelmed the monks and they produced the exquisite calligraphy of the Lindisfarne Gospels, now on show at the British Library.

SENT FROM ABOVE: A visit to St Paul’s Monastery in nearby Jarrow, where the Venerable Bede lived and studied in the 7th and 8th centuries (english-heritage.org.uk). 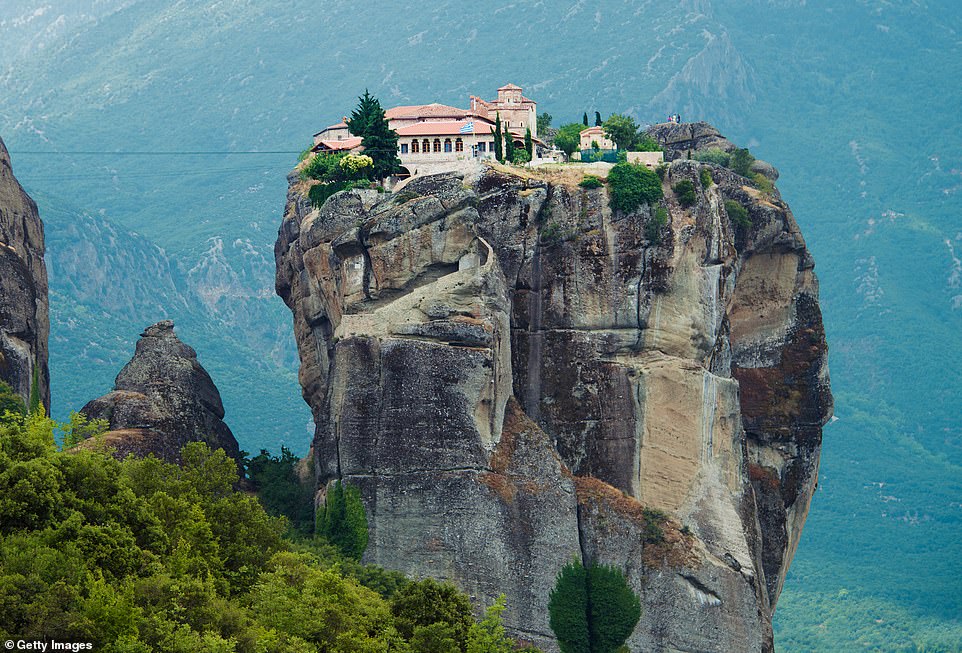 Cliff-hanger: A monastery at Meteora, where the mountains offer a hidden world with monasteries and a nunnery

The most famous monastery in Greece is Mount Athos. However, it is men-only. I prefer the eagle’s nests of Meteora, about a two-hour drive from Thessaloniki.

The mountains here offer a hidden world with monasteries and a nunnery. You can now reach them by walking over bridges. In the past, monks were winched up in caskets.

SENT FROM ABOVE: Walking the path to the Neolithic limestone rock.

Details: For info on entry fees and where to stay: meteora.com.

Guest can stay at Quidenham, a Carmelite nunnery in Norfolk. It was made famous by the late Wendy Beckett, who presented television programmes on art. Asked what the sisters thought of her television celebrity, she replied: ‘They feel sorry for me.’ So Quidenham is a perfect place to master the monastic qualities of simplicity, contemplation and fortitude.

SENT FROM ABOVE: Book a room in advance, when it is possible again (about £50 a night).