One of the striking things about Harry and Meghan’s wedding was the way the liberal Left —who normally flaunt their republican credentials — spent most of the day congratulating themselves on what a triumph for racial diversity it all was.

Indeed, much of the BBC coverage seemed to focus on little else. The unspoken implication of all this was, of course, that most Brits are somehow closet racists.

The truth is that none of the ordinary people who flocked to Windsor — nor the tens of thousands who hosted parties across the country — could give a flying fig about Meghan’s ethnic background, as long as she makes our beloved Harry happy.

This notion that Britain is a horribly racist society — pushed hard for political gain by elements of the Labour Party in the wake of Grenfell and the Windrush scandal — has been really getting my goat lately.

As someone who grew up abroad, I can tell you for certain that compared to most European countries, Britain is practically colour-blind.

But, for the most part, the Brits are an instinctively inclusive lot.

In Italy, where I spent my younger years, vast numbers of Italians are unbelievably racist, especially towards people from Africa, but also towards Eastern Europeans.

The Lega Nord party — which despises not only foreigners but also fellow Italians south of Rome (favourite chant: ‘Africa has monkeys, Italy has Neapolitans’) — is rampant in the hard-hit former industrial cities of the north; and significantly, one of the first promises of the newly formed coalition government is to deport 500,000 illegal immigrants.

Non-metropolitan areas of France and large swathes of Spain are not much different to the Italians in their hostility to anyone with black or brown skin. The French just hide it better.

In Britain, by contrast, we don’t merely embrace other cultures, we go out of our way to make them feel welcome. Tolerance and understanding are not just fine words, they are everyday facts of modern British life.

Try finding a senior Asian politician like Sajid Javid in Italy’s parliament or a brilliant black actor like Idris Elba on primetime TV. People like that simply don’t exist in swathes of Europe, where to be white (and male, but that’s another matter) still means ruthlessly holding the balance of power.

Hence the bitter irony of the UN’s ‘Special Rapporteur on racism’, Tendayi Achiume, concluding — after just 11 days in the UK, speaking exclusively to pressure groups with obvious vested interests — that racism in Britain had been ‘normalised’ since Brexit.

What insulting nonsense. Does that remotely chime with anything you’ve seen or experienced? The fact is most EU countries treat foreign immigrants like dirt compared to the UK.

And it is so typical of blinkered liberal prejudice in this country to conflate a desire to limit mass immigration numbers with a prejudicial dislike of immigrants. The two are simply not the same thing. 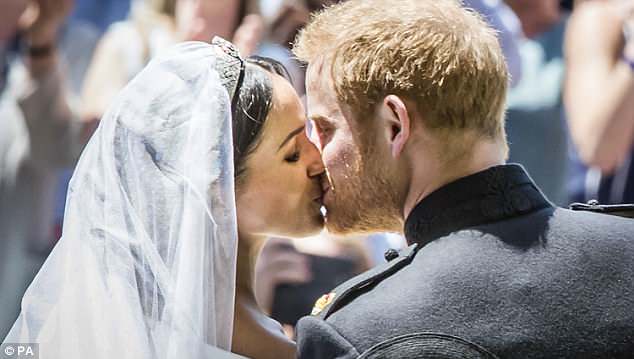 The truth is that none of the ordinary people who flocked to Windsor — nor the tens of thousands who hosted parties across the country — could give a flying fig about Meghan’s ethnic background, as long as she makes our beloved Harry happy

In fact, the experience of Italy, which has seen unprecedented numbers of displaced people arriving from Africa, would indicate that uncontrolled immigration actually aggravates racial tensions.

If we ever leave the EU, we will manage that influx in a way that doesn’t create cultural divisions. But if this false assumption about racist Britain makes me furious, it must be more galling for ethnic minorities.

For it reveals just how little the BBC and the Left really think of black people that for a woman of colour to join the ranks of the royals should be interpreted as such an outstanding achievement. How inherently prejudiced is that? And how nauseatingly patronising.

Of course, it’s great that Meghan has married Harry: she’s beautiful, clever and they clearly adore each other.

But Meghan is not defined by her race, but by what she has achieved in life. For me — as for most people in this country — the colour of her skin is no more relevant than her shoe size.

Believe me, I hold no candle for Speaker Bercow; but calling someone ‘stupid’ is not harassment. Indeed, in Andrea Leadsom’s case, some might argue it is merely a straightforward statement of fact.

Blimey, that didn’t take long. The ink on the marriage certificate is barely dry and already the Royal Family has turned poor Meghan into a Kate mini-me at Charles’s 70th birthday bash.

Either that, or she simply ran out of things to wear and had to borrow one of the Duchess of Cambridge’s dresses. Oh, and trademark nude heels. And — most bizarrely of all — what looked suspiciously like a pair of tights which make her normally sun-kissed Californian calves seem paler than Camilla’s.

Either way, for her first official royal engagement, Meghan seemed to have adopted the full doors-to-manual style favoured by her new sister-in-law.

Let’s hope it’s just a temporary blip — and that the real Meghan will be returned to us soon.

Harry and Meghan’s wedding was, without question, one of the best dressed I’ve witnessed. The only duff note was, once again, struck by Beatrice and Eugenie.

How these two young Princesses can get it so wrong is one of the universe’s great mysteries.

Admittedly, their outfits weren’t quite as bad as what they wore for William and Kate’s nuptials; still, it takes some doing to make a pretty 28-year-old like Eugenie look frumpier than her 92-year-old grandmother. As for Beatrice, who cares if the dress is designer — Roksanda — and cost £12,000? The problem is that a high neck is simply no good on a girl like Beatrice, who has quite a generous bust which, frankly, could do without having lots of pompoms stitched to it.

That dress was designed to be worn by some winsome waif, not a hearty, milk-fed gal — and no amount of money or wishful thinking is going to change that. 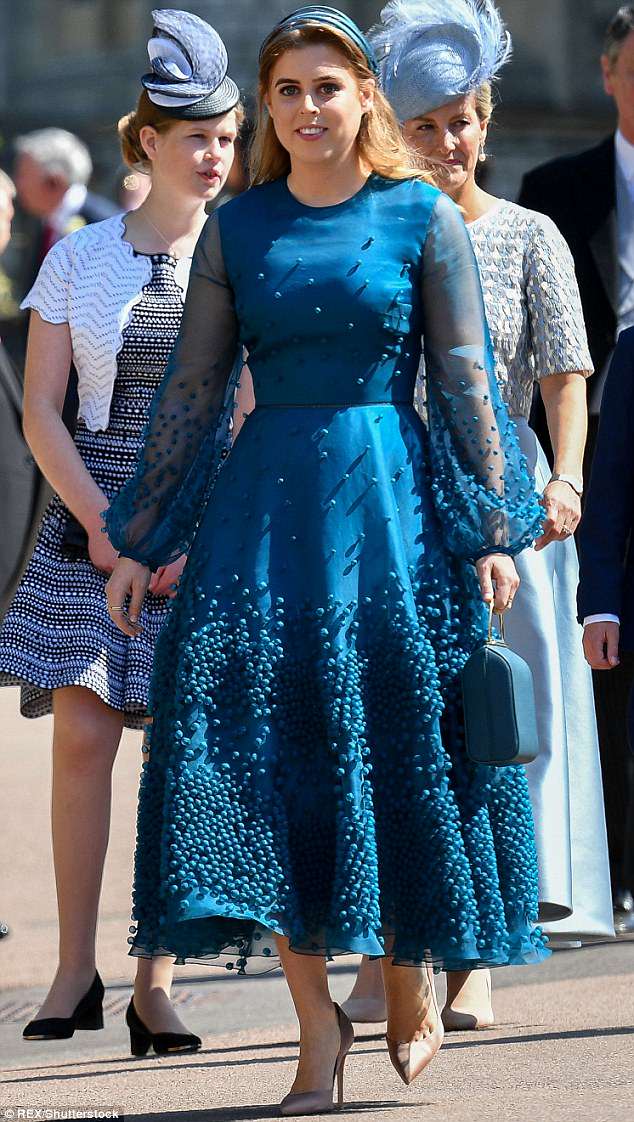 Harry and Meghan’s wedding was, without question, one of the best dressed I’ve witnessed. The only duff note was, once again, struck by Beatrice and Eugenie

The latest inane craze to sweep the internet is female celebrities showing off their ‘Toblerone tunnels’, aka a triangular gap at the top of the thighs that mirrors the shape of the popular Swiss chocolate bar. Proof that spending too much time online addles the brain: you’re supposed to eat the stuff, ladies, not sit on it.

Felicity Kendal attributes her youthful appearance to doing ‘yoga in the garden’.

So that’s what they’re calling Botox and fillers these days! 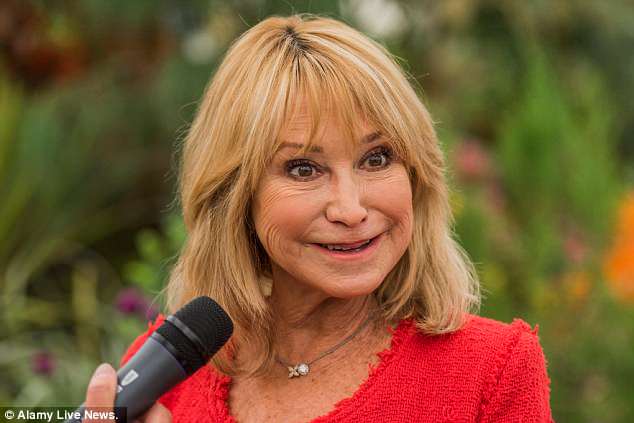 Felicity Kendal attributes her youthful appearance to doing ‘yoga in the garden’. So that’s what they’re calling Botox and fillers these days!

Michelle and Barack Obama have reportedly signed a deal to make TV shows for Netflix. All very worthy I’m sure but, for sheer entertainment, I think I’d prefer to watch TV made by Donald and Melania Trump.

Having enjoyed the novels of Edward St Aubyn (if ‘enjoyed’ is the right word: they are brilliant, but not exactly an easy read), I’ve been gripped by Benedict Cumberbatch’s portrayal of Patrick Melrose in Sky Atlantic’s eponymous new series.

Not only does Cumber-batch capture brilliantly the darkly comic nature of the novels, he is also providing a useful public service to those of us with reckless teenage girls.

Mine, who like all her friends adores Cumberbatch, has been genuinely shocked by his portrayal of the agonies of drug abuse, which masks none of the grim reality.

So many TV shows glamorise addiction; this one portrays it in all its terrifying gore. So much more effective than some dry parental lecture. 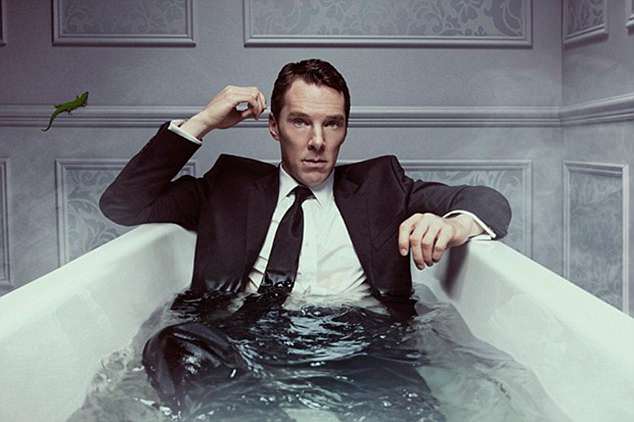 I’ve been gripped by Benedict Cumberbatch’s portrayal of Patrick Melrose in Sky Atlantic’s eponymous new series. Not only does Cumber-batch capture brilliantly the darkly comic nature of the novels, he is also providing a useful public service to those of us with reckless teenage girls

In a new (YouGov) poll asking voters who would make the best PM, Theresa May or Jeremy Corbyn, the latter comes third. Yes, that’s right: first was May (37 per cent), second ‘don’t know’ (35 per cent), third Corbyn (27 per cent). Quite an achievement to come third in a two-horse race!

I’m heartily sick of people ‘sharing moments’ on social media. Take Meghan’s Hollywood pals, who religiously documented every moment of their involvement in the Royal Wedding via a series of pouting selfies.

Except it’s not ‘sharing’, is it? Sharing implies an element of generosity, not rampant vanity. ‘Showing off’ would be more appropriate. Or — if you want to be really honest — ‘boasting’.

I’m loving all these companies whose mailing lists I’ve accidentally signed up to over the years having to email me to ask if I still want to ‘stay in touch’ because of the new General Data Protection Regulation that comes into force this week.

Bearing in mind that there is barely a handful of people in the world I ever want to stay in touch with, and most of them live under the same roof as me, the answer is inevitably, joyously, NO!