The admiration young Jeremy Hunt felt for his naval officer father went beyond the mere hero worship of a son for his dad. Young Jeremy learned from him the old-fashioned virtues such as respect, tolerance, generosity and a sense of fair play.

Now, it transpires, there was another quality to Sir Nicholas Hunt – heroic compassion.

Yesterday the Tory leadership campaign took an extraordinary turn after it emerged that as a toddler, Jeremy Hunt had shared a bath with his baby sister Sarah in which she had drowned.

Jeremy Hunt as a member of the Charterhouse cross-country team. Image is undated

The would-be Conservative Prime Minister was only two when his nanny left the infants playing in the water for several minutes.

By the time she returned, the little girl, just ten months old, was dead. Heartbreakingly, Jeremy told her: ‘Sarah’s asleep.’

At a subsequent inquest, Mr Hunt’s father, who during a long and distinguished Royal Navy career had the highly sensitive role during the Falklands War of overseeing how families were informed of deaths, gave the most poignant of addresses absolving their sobbing nanny of all blame.

But for the forensic glare of the slug-fest between Jeremy Hunt and Boris Johnson, this deeply personal family tragedy might have remained secret.

Only the briefest of lines in Admiral Sir Nicholas Hunt’s obituary – he died in 2013 – had recorded the fact that a daughter had died in infancy.

But then suddenly on Wednesday night, Mr Hunt was questioned about this saddest of memories in an interview with ITV political editor Robert Peston. The presenter has since faced a storm of criticism on social media for asking about the bereavement – only for him to reveal that he did so after checking that it was acceptable to raise the subject.

How much this loss has shaped the Foreign Secretary in his subsequent career is clearly a matter of conjecture. As for how it has affected him personally, he was unwilling or unable to say.

The exchanges began with Peston asking: ‘Something really rather extraordinary about your childhood, which I was completely unaware of, is that you had a baby sister who tragically died. Could you just tell me a little about what that was?’

Mr Hunt replied: ‘I don’t talk about that normally and actually I wouldn’t say that this is something that has affected me emotionally, because she was just a few months old when she died in a terrible accident and I was too young to ever remember it. But I do know it affected my parents.’ 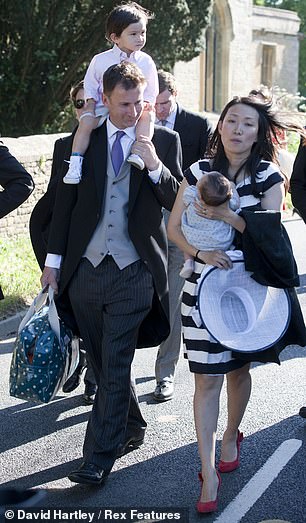 Hunt with his wife Lucia Guo and two of their children in Oxfordshire on May 26, 2012

Peston continued to probe, saying: ‘It must have affected you, don’t you think? This is the sort of tragedy that has a profound effect on families.’

Mr Hunt stuck to his script: ‘Well, I was only two years old, so it’s not something that I have any memories of, but, as I say, I do know it affected my parents.’

The former Health Secretary did venture that the bereavement perhaps influenced him when, as a politician, he met grieving parents, saying: ‘Maybe when I met parents who had lost children in the NHS – people such as Carl Hendrickson and James Titcombe – maybe that triggered something in me.’

Pressed for details by Peston, Mr Hunt added: ‘I’d rather not, if you don’t mind, Robert, it’s a very personal family thing.’

The matter may have remained there but for the emergence yesterday of a newspaper report published shortly after Sarah’s death in March 1969.

Today such an accident – and especially the father’s moving reaction – would have been national news. Fifty years ago, the inquest merited just a brief report of the resulting inquest in the now defunct Kensington Post under the headline, ‘Dead child’s nanny praised by father.’

Westminster Coroner’s Court was told that Sarah was having a bed-time bath with Jeremy, who was not named in the report – while nanny Dianne Brady ‘was in the kitchen preparing the baby’s food’.

Miss Brady, who was described as ‘very distraught in the witness box’, said she had put the children in the bath in about five or six inches of water and had gone to their bedroom to lay out pyjamas. She then went to the kitchen to prepare the baby’s supper.

‘She had some difficulty in finding the baby’s bottle and she also put the spin drier on,’ the report continued. ‘She told the coroner the machine was quite noisy and that she thought all this had taken about five minutes. When she went to the bathroom, the elder child was sitting at the end of the bath and said “Sarah’s asleep”.’ The younger child was lying face upwards and Miss Brady said she tried to revive her.’

After hearing the evidence, the coroner recorded a verdict of accidental death. It was then that Mr Hunt’s father, described in the report as a commander, took the stand for his courageous personal statement. ‘We have had Miss Brady with us for about six months,’ he said, ‘and we think she’s absolutely marvellous and both children absolutely adored her.’

The Hunts’ life was a peripatetic one. Like all military families, they were often on the move. At the inquest, the then Commander Hunt was described as living in Kensington Park Road. These days the Notting Hill thoroughfare is one of the smartest addresses in West London where properties sell for between £5 million and £10 million. Jeremy, born in 1966, was the first of four children to Nicholas and Meriel. Sarah came along two years later. In 1970, Charles was born, followed a year later by Susanna. 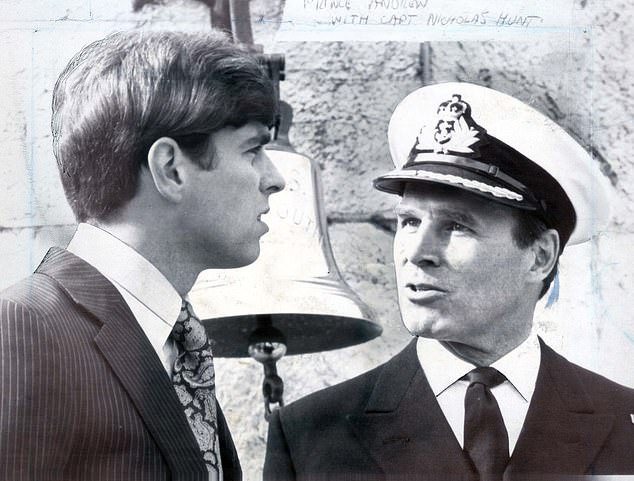 Over the years the family lived in London, Edinburgh, Portsmouth and Dartmouth, but by the time Jeremy was 13 they were settled in Surrey and he was sent to Charterhouse, the exclusive public school where he became head boy. He went on to Oxford, where he was a contemporary of David Cameron.

For young Jeremy, there was no pressure to join the Navy. ‘My father was an entrepreneur at heart and just as excited about me setting me up a business,’ Mr Hunt told the Daily Mail. ‘He was a very unconventional naval officer. He hated yes men. My father was the biggest influence on my life because he was someone who was incredibly kind but he had real steel underneath. In the Navy he had a reputation as someone who cared about the most junior person on the ship. His values left a big impression on me.’

Sir Nicholas joined the Navy as a teenager and rose through the ranks to become Commander-in-Chief, Fleet in the mid-1980s. The role came with a seat at Nato’s top table: as Allied C-in-C, Channel and Eastern Atlantic, he oversaw tense stand-offs between Communist and Western submarines.

Had the rhetoric of the Cold War dissolved into war, it would have been up to Cmdr Hunt to ensure US forces could cross the Atlantic to join the fight. He viewed command of the UK’s nuclear deterrent as a grave responsibility, and was a forceful advocate of Trident. 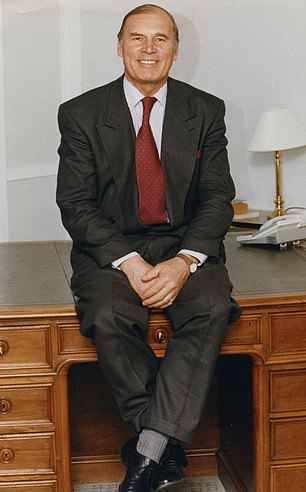 Sir Nicholas Hunt, in his office at the Chamber of Shipping, 1993

Like many an admiral, including Nelson, he battled seasickness throughout his career.

However, unlike most, his flair and ability to rise to the top became apparent only after several decades of service.

He passed out second from bottom of his class at Dartmouth and, while praised for a cheerful, strong character, whose personality ‘will particularly appeal to his men’, there were concerns.

‘Not particularly clever,’ said a report on his time on HMS Vanguard in 1948.

Another asserted that he ‘sometimes shows a lack of confidence in his own ability which is quite unjustified’.

From 1959 to 1962, he was transferred to royal duties as equerry and assistant private secretary to Princess Marina, the dowager Duchess of Kent. One of his key duties was to drive the teenage Prince Michael of Kent and the Duke of Kent to and from school. He also accompanied Princess Alexandra to Nigeria’s independence ceremony to represent the Queen.

He eased the Duke of Kent’s then fiancée Katharine Worsley into public life by escorting her on to the floor for her first dance at the 1961 Golden Jubilee Rose Ball. Years later the royal connection was resumed when he was one of Prince Andrew’s commanding officers.

The turning point in his naval career came on a visit to Malta where he met Navy nurse Meriel Givan. As captain of HMS Troubridge he was obliged to read his own banns of marriage at sea as the T-class destroyer was too small to warrant her own chaplain.

The confidence that Meriel gave him helped him to flourish, initially as executive officer of the aircraft carrier Ark Royal and then as commanding officer of amphibious warfare ship Intrepid. Such was his devotion to Meriel that he caused ripples by bringing her to official Royal Navy events at a time when wives were not invited.

In retirement he was director-general of the UK Chamber of Shipping when the IRA bombed the Baltic Exchange in London in 1992. Arriving at the scene to find the organisation’s offices destroyed in the blast, he and Meriel organised, then manned, a soup kitchen in the rubble to feed survivors and emergency workers.

Reflecting on his father’s remarkable intervention half a century ago, Jeremy Hunt added: ‘It is one of those tragedies that lots of families have to live with what happened. My mum is someone who always bounces back, however tough things get. She is one of the most optimistic positive people I’ve ever met. So I’ve got a lot of influence from both my parents.’

Despite the great loss, Mr Hunt has warm recollections of family life. His views about the importance of the family stem from those memories, and have been strengthened by his marriage to Chinese-born Lucia to become a core part of his political philosophy – not least with his eye-catching pledge to offer tax breaks for granny flats easing the social care burden.