Satellite measurements of the Earth’s surface temperature have confirmed that global warming is heating up the planet.

The infrared system that measures heat radiating from the Earth was used to record its surface layer – or ‘skin’ – temperatures from 2003 to 2017.

It showed a warming pattern consistent with temperature measurements taken on land during the same period.

A combination of both data sets and all the existing research creates an even stronger proof of global warming, researchers claim.

Infrared readings from satellites in space were used to measure the Earth’s temperature at the surface of the ocean, land and snow and ice covered regions.

They were taken over the span of 15 years and compared to readings taken on land at special ‘base-stations’ by NASA’s Goddard Space Flight Centre.

The two set of data showed the same trend of increasing global temperatures between 2003 and 2017 and confirm the planet is getting warmer, say scientists.

The authors of the paper wrote about the satellite data’s contribution to the land recorded data in generating stronger evidence for global warming: ‘The satellite-based surface temperatures can serve as an important validation of surface-based estimates and help to improve surface-based data sets.’ 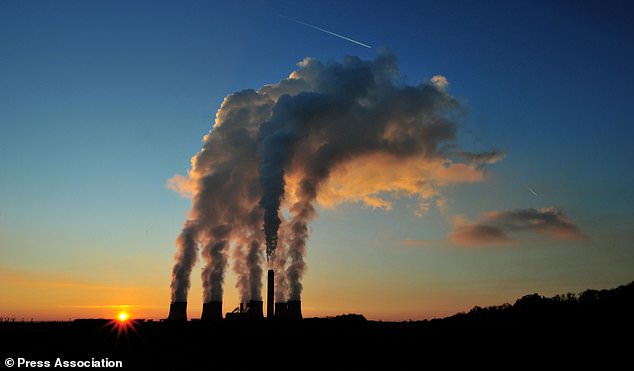 The Earth’s rising temperature has been visualised via satellite ‘skin’ surface maps that confirm global warming is heating up the planet. The system which measures the heat energy radiating from the earth via infrared, was used to record temperatures from 2003 to 2017 (file photo)

The satellite system that captured the infrared data, called AIRS (Atmospheric Infra-Red Sounder), takes temperature readings of the surface of the ocean, land and snow-covered regions.

The surface layer is often referred to as the ‘skin’ surface, and the maps generated by the data called ‘skin surface maps’.

The maps were compared with station-based data (Gistemp) from the Goddard Institute for Space Studies Surface Temperature Analysis.

Satellite data is thought to be potentially more accurate as it covers a wider land surface area compared to data from individual base-stations that may only represent the local area.

Co-author Dr Gavin Schmidt, also from the Goddard Institute, noted some subtle differences in the data: ‘Interestingly, our findings revealed that the surface-based data sets may be underestimating the temperature changes in the Arctic.

‘This means the warming taking place at the poles may be happening more quickly than previously thought.’

The full report of the study is published in the the journal Environmental Research Letters.

HOW WAS THE ANALYSIS PERFORMED?

The current analysis compared data measurements of the Earth’s temperature from satellite data (AIRS) to data collected on land (GISTEMP).

AIRS surface temperatures have better spatial coverage of the Earth than those of GISTEMP which are taken at individual base stations.

Infra red waves transmit as heat and are used for surface temperature recordings by Infrared satellites.

Land recordings were taken at base stations across the Earth.

The fact that both types of data indicate similar levels of warming in similar regions of the world show the individual data sets are likely accurate.

The satellite-based surface temperatures are an important validation of surface-based data and help to strengthen the evidence for global warming.