North Korea is suspected of progressing nuclear activity plans after a series of satellite photographs uncovered what is believed to be a secret warhead plant.

Experts say the site, in the village of Wollo-ri near the capital of Pyongyang, has the classic signs of being a nuclear factory.

The area was photographed by Planet Labs and analysed by experts at the Middlebury Institute of International Studies.

Jeffrey Lewis, a professor at the Institute, said the facility has a strong security perimeter, possible underground provisions, on-site high-res residential buildings as well as a series of monuments to leadership visits.

New imagery shows a hive of activity as well as a security perimeter, possible underground provisions and a series of monuments to leadership visits

He said the factory was active and had an abundance of vehicle traffic, as captured in the images.

The new photos come amid stalled talks between Washington and Pyongyang as US officials continue to insist that the government is focused on the total denuclearisation of North Korea.

That’s despite the fact that Kim Jong-Un never officially agreed to these terms.

In recent months North Korea’s state media have said the country’s leaders have no intention of engaging in talks with the US. 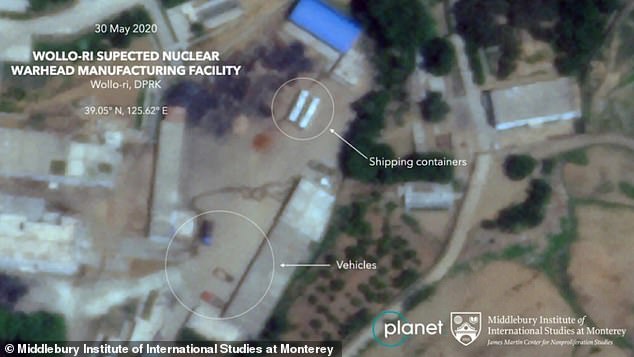 The factory’s ‘activity has not slowed down – not during negotiations and not now’, Lewis told CNN.

He also revealed that North Korea emphasises better housing – such as is seen in the satellite images – as a perk for those involved in nuclear programmes.

Lewis said that no state media has reported on leadership visits, despite monuments identified at the Wollo-ri site, which may indicate secrecy.

These, he said, are ‘characteristics of other DPRK nuclear facilities’.

The experts added that the vehicle traffic suggests ‘manufacturing at Wollo-ri continued during the summit process that stretched from the meeting in Singapore in June 2018 to the June 2019 meeting between Trump and Kim in the DMZ.

‘Recent satellite images show that vehicle traffic continues, suggesting that the DPRK continues to manufacture nuclear warheads or their components’.

Lewis also noted that the plant is located next to a bottled water factory that has none of these characteristics.

His team had previously decided not to publicise the facility after it was identified by separate researchers in 2015, because they could not identify its specific role within North Korea’s nuclear program. 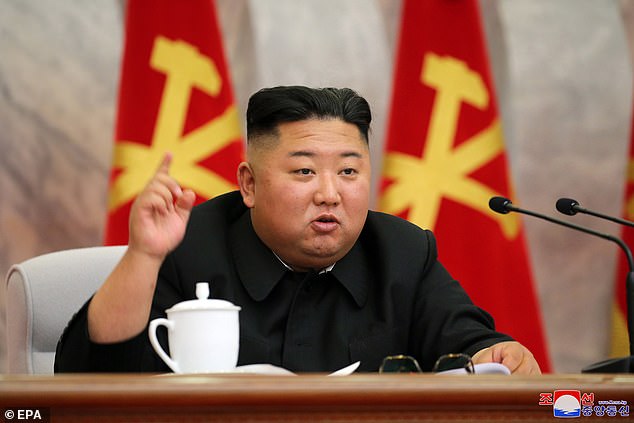 Last month a 5,500 word report was published by the North Korean Foreign Ministry which unveiled plans to ‘combat American aggressions’

That changed, however, following the news that the site’s name and function is due to be published in an upcoming book written by North Korea expert Ankit Panda, called ‘Kim Jong Un and the Bomb’.

Panda says the plant is believed to be manufacturing warheads.

It may also function as a storage facility for these weapons if Jong Un needs to disperse his stockpile ‘for better responsiveness in a crisis’, according to passages seen by CNN.

The CIA and Pentagon declined to comment when asked if the facility is believed to play a role in North Korea’s nuclear program.

The disclosure of yet another previously unknown facility in North Korea compromises Donald Trump’s 2018 claim that the country no longer poses a nuclear threat.

But last month a 5,500 word report was published by the North Korean Foreign Ministry which unveiled plans to ‘combat American aggressions, NKNews reported.

North Korea revealed in its statement that it had missiles and nuclear weapons ‘capable of mercilessly punishing those who dare to raise a hand to the DPRK’.