Saudi Arabia has claimed Jamal Khashoggi’s killers have been ‘brought to justice’ after describing the murder as a ‘heinous crime’ and ‘unfortunate accident’.

The head of the Kingdom’s human rights commission refused to name any of those it said was involved – but insisted they had not been subjected to torture.

Saudi Arabia was ‘horrified’ by the writer’s killing in Istanbul in October last year but will continue to reject any international role in the probe, Bandar bin Mohammed Al-Aiban told the UN Human Rights Council.

Those accused of the ‘heinous crime’ and ‘unfortunate accident’ at its Istanbul consulate had attended three hearings so far with their lawyers present, he said.

‘Therefore what is being conveyed by certain media regarding the need for us to internationalise some of these matters is something we do not accept because such demands amount to interference in our domestic affairs and in our domestic judicial system,’ he told the Geneva forum.

Last month, a UN human rights expert said Khashoggi was murdered in a a ‘brutal and premeditated killing’ carried out by Saudi officials.

Agnes Callamard, the UN special rapporteur on extrajudicial, summary or arbitrary executions, made her assessment after visiting Turkey.

His remains have not been found and it is feared his body could have been dissolved in acid after being cut into pieces by a Saudi hit squad.

Callamard said that Saudi Arabia undermined Turkey’s efforts to investigate the death and that the killing was carried out ‘by officials of the State of Saudi Arabia’.

Her four-member team met with the foreign and justice ministers, the country’s intelligence chief and the prosecutor leading the case.

She found that, ‘Turkey’s efforts to apply prompt, effective and thorough, independent and impartial, and transparent investigations – in line with international law – had been seriously curtailed and undermined by Saudi Arabia,’ the UN human rights office in Geneva said in a statement.

Callamard said in a statement that ‘woefully inadequate time and access was granted to Turkish investigators to conduct a professional and effective crime-scene examination and search required by international standards for investigation’. 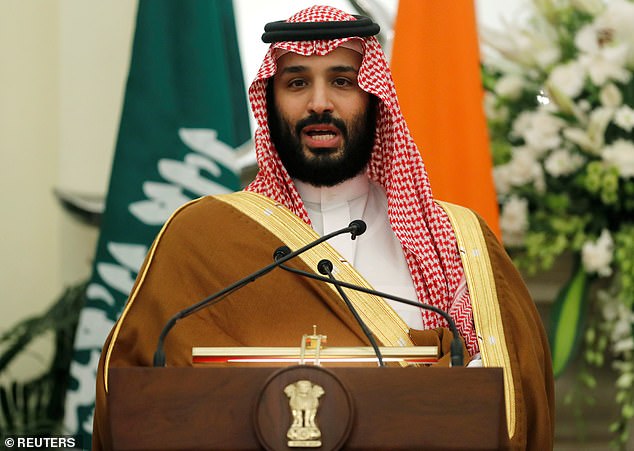 Khashoggi’s killing by a team of Saudi operatives provoked widespread revulsion and tarnished the image of Crown Prince Mohammed bin Salman, previously admired in the West for pushing deep changes including tax reform, infrastructure projects and allowing women to drive

The UN team was given access to parts of the audio material obtained by Turkish intelligence on Khashoggi’s killing, but was ‘not able to undertake a deep technical examination of this material’ and didn’t have an opportunity to authenticate it independently.

The statement said the team wasn’t able to carry out some other inquiries, such as meeting forensic and crime scene experts involved, ‘largely, but not only, due to time constraints.’

She plans to present a final report to the UN Human Rights Council in June, but did not point to any specific officials responsible for the killing.

Khashoggi’s killing by a team of Saudi operatives provoked widespread revulsion and tarnished the image of Crown Prince Mohammed bin Salman, previously admired in the West for pushing deep changes including tax reform, infrastructure projects and allowing women to drive.

US intelligence agencies the de facto Saudi ruler ordered an operation to kill Khashoggi, a critic and Washington Post columnist, and say his body was dismembered and removed to a location still publicly unknown. Riyadh denies the prince had any involvement in the murder.