A dissident comedian, who repeatedly mocks Crown Prince Mohammed bin Salman on social media, says he will not back down despite the murder of journalist Jamal Khashoggi and after being beaten by alleged henchmen in London.

Ghanem Almasarir, who nicknames Prince Mohammed ‘Tubby Teddy Bear’ in YouTube videos, claims he was attacked by a group of men acting on the orders of the de facto ruler of the kingdom who tried to intimidate him.

The popular video-blogger, who is well-known in the Arab world for his satirical anti-regime YouTube channel, said he was beaten and his friend bribed by men presumed to be Saudi agents outside Harrods in London around a month before journalist Khashoggi disappeared.

After having coffee in Knightsbridge, Almasarir was walking towards Hyde Park with a friend on August 31 when the pair realised they were being followed by two Saudi men.

The two alleged agents began shouting abuse at Almasarir before a confrontation took place in front of the upmarket department store, where one of the attackers was seen punching the satirist in the face. 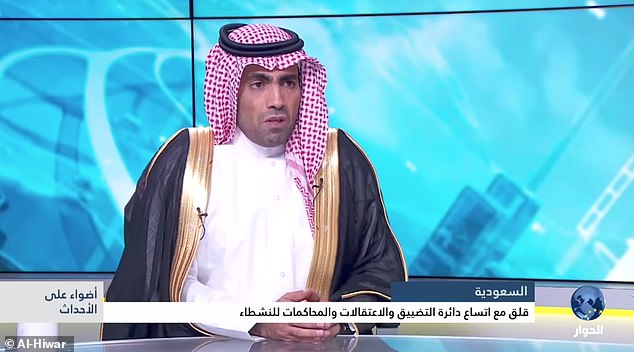 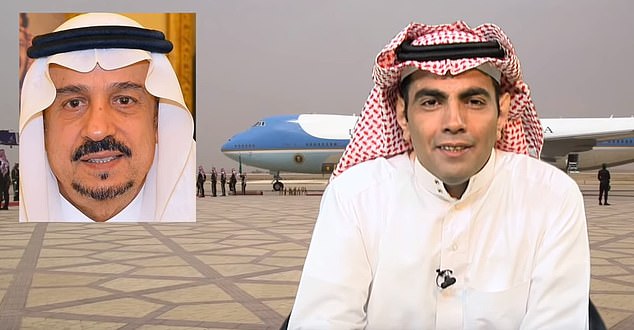 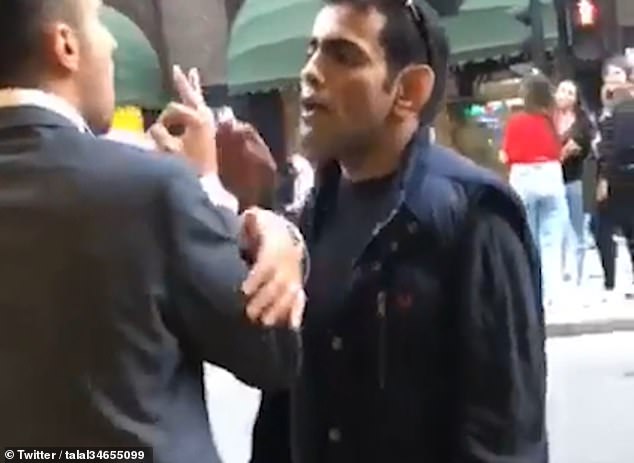 As the brawl took place in broad daylight a crowd of passers-by and shoppers stopped and watched, taking phone footage and posting videos and pictures on social media.

Footage of the argument shows a man in a grey suit trying to separate the group as they push each other, before Almasarir is punched twice in the face.

The video blogger also claims another man tried to bribe his friend after the attack to not report the incident to police.

Iyad el Baghdadi wrote alongside a video of the attack: ‘Be careful Britain, be very careful – if you allow attacks on opposition figures on your territory to pass without incident, the next step will be assassinations. This isn’t a joke, this isn’t hyperbole – this is totally serious.’

From self-imposed exile in Britain, the political satirist, who regularly roasts the ruling Saudi royal family, has racked up more than 200 million views on YouTube.

Almasarir’s comedic videos, which see 94 per cent of his hits coming from within Saudi Arabia, ridicule in particular the crown prince – the man said to be the power behind King Salman’s throne.

He said he hoped the global outrage at the murder of the Washington Post columnist, Khashoggi, would bring change to the kingdom.

Almasarir, who claimed asylum in the UK, said: ‘I mock the Saudis. I nickname the crown prince Tubby Teddy Bear. I criticise them and make a joke out of them and their decisions. 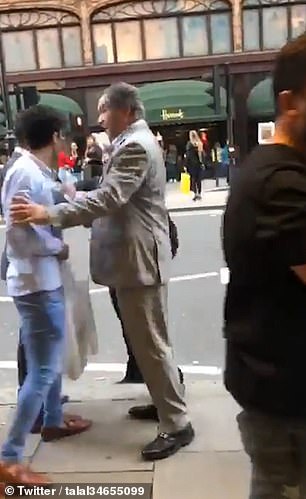 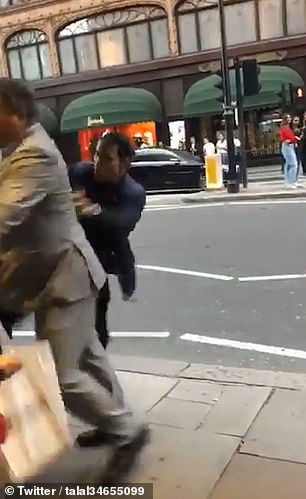 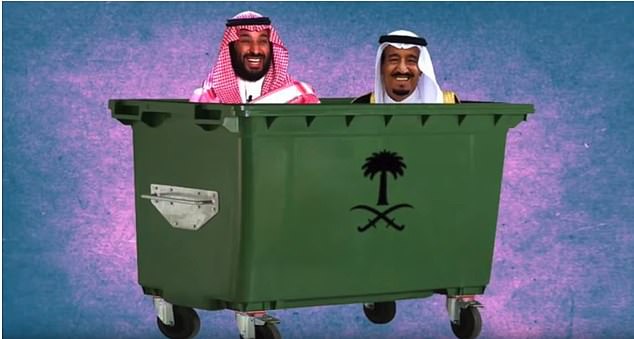 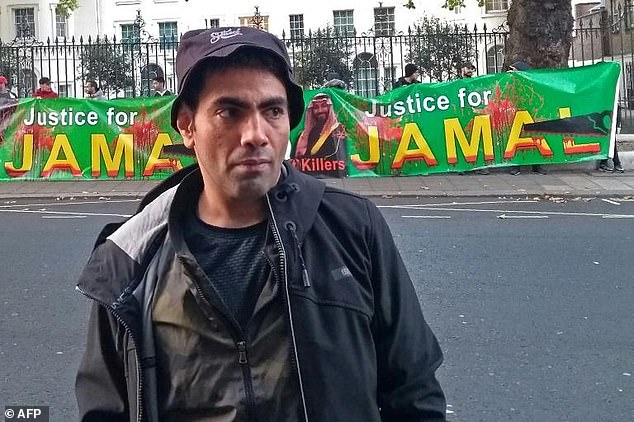 Saudi dissident satirist Ghanem Almasarir said during a protest in London that he would not be intimidated into silence by the murder of Jamal Khashoggi, the journalist killed inside the Saudi consulate in Istanbul 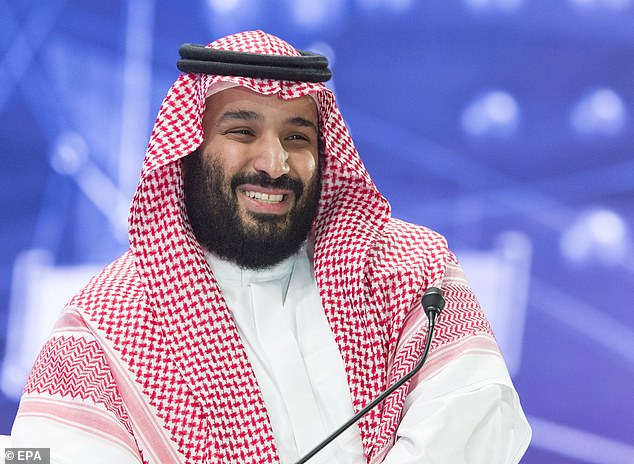 ‘If they refuse to do so, the international community should get together and impose sanctions on him personally. He should be banned from travelling.

‘The Saudi people are fed up with the government, they don’t trust them and they see my show as a voice for them.’

He added that people watched his YouTube channel ‘in secrecy but I hope that one day [they] will share it and it’s not a crime in Saudi Arabia’.

Speaking at a protest yesterday outside the Saudi embassy in London, Almasarir said Khashoggi’s killing had shown the wider world a darker side to the power wielded by Prince Mohammed.

Almasarir and a dozen activists hired an old-fashioned, open-top red London bus to drive past the Saudi embassy for their demonstration, chanting ‘Where is the body of Jamal?’ and accusing Prince Mohammed of being behind his murder.

The bus was plastered in banners reading ‘Justice for Jamal’, which the demonstrators then unfurled outside the security fence surrounding the plush 18th-century mansion in central London.

The 38-year-old activist said: ‘If they are not held accountable, they will continue to do it’, adding that many Saudi dissidents living in Britain were ‘afraid right now to leave their houses’. 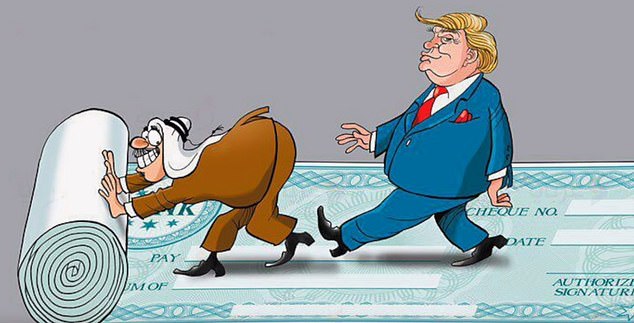 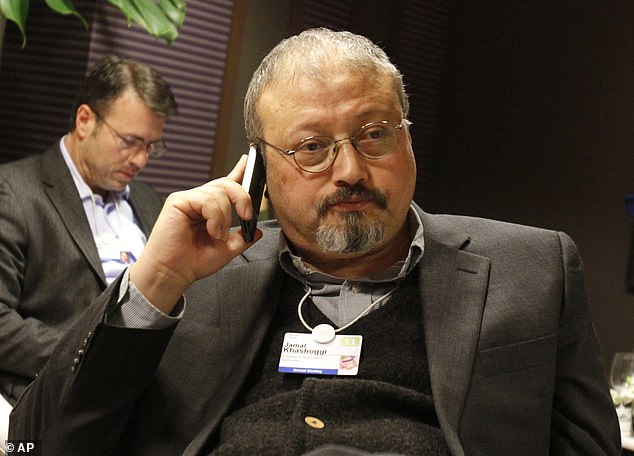 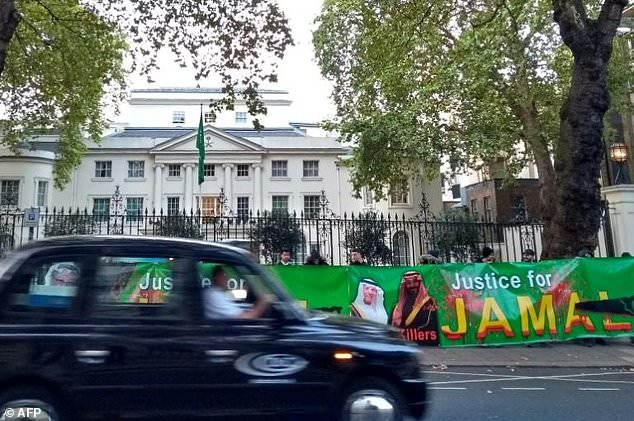 A protest outside the Saudi embassy ion London. Riyadh is facing growing incredulity over its explanations about the killing of Khashoggi, a Washington Post contributor and critic of the crown prince’s policies

Riyadh faces growing incredulity over its explanations about the killing of Khashoggi, a Washington Post contributor and critic of Saudi policies.

After he disappeared at the Saudi consulate in Istanbul on October 2, Saudi officials said he left unharmed. But on Friday they announced he had been killed inside in an altercation.

World powers including Britain and France are demanding answers and US President Donald Trump has accused Saudi Arabia of lying about the murder.

Khashoggi’s death has caused such a wave of fear among exiles that some are now cautious of even visiting their country’s overseas missions.

Looking at the wrought iron gates of the Saudi embassy, Almasarir said he has no plans to step beyond them and return to Saudi soil any time soon, fearing he would also be murdered.

‘If we happen to walk inside, I think we will end up like what Jamal Khashoggi has suffered.

‘They might kill us and dismember our bodies,’ said the dissident, who has political asylum in Britain and said he has refused invitations to renew his Saudi passport at the embassy.

After emerging as first-in-line to the Saudi throne in June 2017, Prince Mohammed gained popularity after shaking up the ultraconservative kingdom with fundamental reforms. 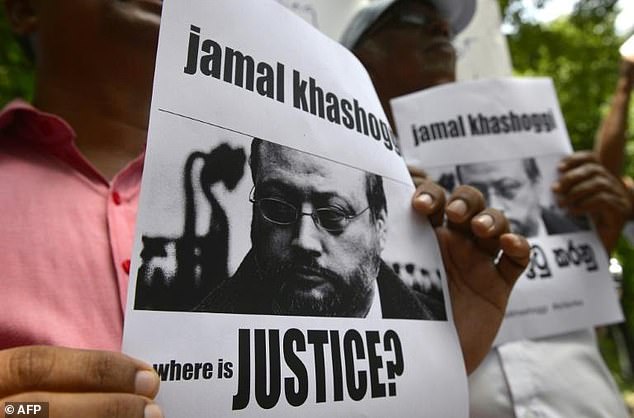 Saudi Foreign Minister Adel al-Jubeir previously blamed the murder on a ‘rogue operation’, but Western powers have said that many questions remain unanswered and that the Saudi explanations so far lack credibility 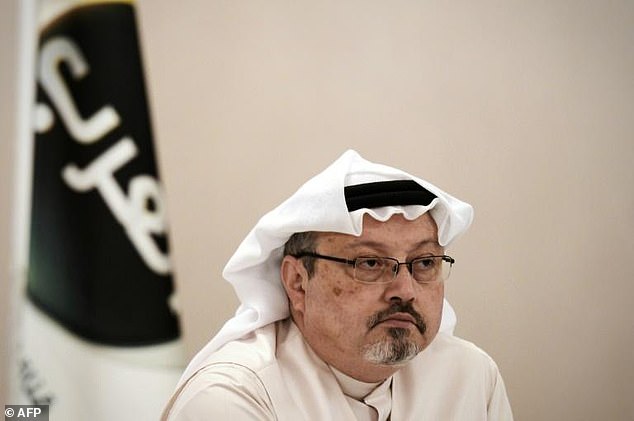 However, his image has been tarnished by Khashoggi’s killing and many critics now see the 33-year-old’s crackdown on dissent as verging on authoritarianism.

Saudi Foreign Minister Adel al-Jubeir has blamed the murder on a ‘rogue operation’ by individuals who ‘exceeded their responsibilities’ and then ‘tried to cover up for it’.

But Western governments have said many questions remain unanswered and that the Saudi explanations so far lack credibility.

He added: ‘A lot of people around the world have the wrong image of the Saudis.

‘If critics were being murdered abroad, it begs the question as to the fate of domestic dissidents.

‘But I don’t think we should be intimidated because we have freedom of speech.’

Some American politicians are calling for tough action if a link to the Saudi royal family is proven. Saudi officials say the crown prince did not order the killing.

Still, Britain and the US have already imposed visa bans on the people identified as potential suspects in the murder.