Saudi, US must pursue ‘urgent efforts’ for Yemen peace:…

The two defense ministers also discussed ways Saudi Arabia might be able to offer or facilitate some sort of a “safe haven” to more moderate Taliban members who are prepared to negotiate for peace in Afghanistan, an official said.

Mattis and Prince Mohammed met at the Pentagon as part of Prince Mohammed’s tour of the United States, which began this week with a White House visit.

“As you discussed with President (Donald) Trump on Tuesday, we must also reinvigorate urgent efforts to seek a peaceful resolution to the civil war in Yemen and we support you in this regard,” Mattis told Prince Mohammed.

Mattis said he believes Saudi Arabia is “part of the solution.”

The devastating three-year-old conflict was an early proving ground for the prince, who is also the minister of defense, but it has been beset by allegations of atrocities against civilians, and strategic drift.

Just hours after the prince left the White House on Tuesday, the US Senate rejected a bipartisan bid designed to curtail US support for the war, which includes air-to-air refueling of Saudi jets as well as target and intelligence sharing.

Mattis had lobbied Congress to reject the bill, warning that restrictions could increase civilian casualties, jeopardize counterterrorism cooperation, and “reduce our influence with the Saudis.”

Speaking through a translator, Prince Mohammed told Mattis that cooperation between the Pentagon and the kingdom has “improved tremendously” of late.

More than 9,200 people have been killed and tens of thousands wounded in Yemen’s war, which is seen as both a civil conflict and a proxy war between regional titans Saudi Arabia and Iran. 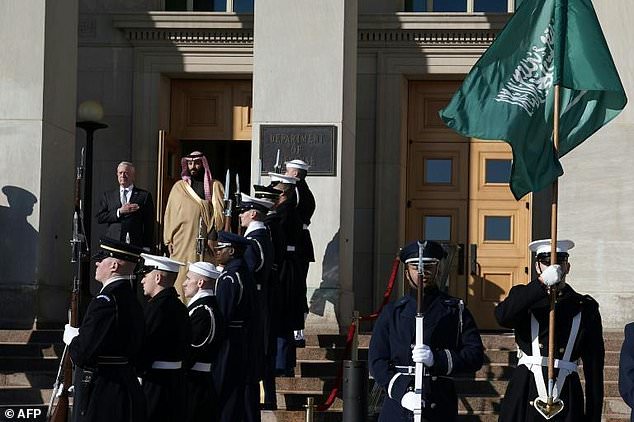 Pentagon spokeswoman Dana White said after the meeting that Mattis and Prince Mohammed did not discuss civilian casualties except when it had been brought up by a reporter.

Separately, on Afghanistan, White said Mattis and the prince discussed the issue of what to do with Taliban members open to peace talks.

During a visit to the war-torn country last week, Mattis and other US officials claimed some Taliban elements are open to talking with the Afghan government, after Afghan President Ashraf Ghani unveiled a plan to open peace talks with the insurgents.

“Ensuring that there is a safe haven for those who would want to negotiate a political solution is what they generally talked about,” White told reporters.

The prince “was supportive of finding ways to help the reconciliation,” she added.

“Not necessarily specifically safe haven but talking about (looking) at ways to help facilitate a political reconciliation for those Taliban members who are willing to talk.”

Saudi Arabia nurtured the Taliban’s rise in the 1990s and was one of only three countries, along with the United Arab Emirates and Pakistan, to recognize the Taliban government.

White added that Saudi Arabia expressed an interest in doing greater training with US forces, and noted that Trump had been hastening military sales to the kingdom.

The State Department confirmed it had green-lighted a $670 million deal for anti-tank missiles, a $106 million contract for helicopter maintenance and $300 million for ground vehicle parts.