A sausage dog blew up to three times its natural size after its punctured windpipe caused the pet to inflate with every breath as air escaped into his body.

Vets had to stitch up the hole to deflate Trevor and stop him filling with air like a balloon, with X-rays revealing an enlarged outline that left the dachshund looking more like a seal.

Owner Fran Jennings from Lymm, Cheshire, said she came downstairs to find her pet ‘in a bad state’

‘He literally looked like he’d blown up like a balloon and we had no idea what had happened,’ the 49-year-old said. ‘He was three times the size he should’ve been. 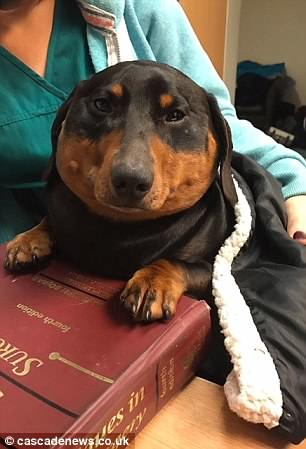 Trevor – pictured, left, at his normal size – ballooned due to a punctured windpipe which left him looking a lot larger (right)

‘We put him straight in the car and took him to the 24-hour emergency vets and they had never seen anything quite like it.’

Her daughter Jessica said: ‘When I saw Trevor, he looked like a big fat seal, his whole body was like a blob and you couldn’t tell his face from his neck.’

Michelle Coward, of Warrington’s Beech House surgery treated the four-year-old dachshund. The vet explained how the pet ballooned with each breath.

‘Every time he took a breath, some of the inhaled air escaped through a hole in his windpipe around the muscles and fatty tissue under the skin, and X-rays showed the emphysema was worsening,’ she said. This X-ray shows how far the build-up of air had inflated Trevor’s body from the inside, pushing it far wider than his core body shape

‘Surgery was the only way to repair the injury but due to its location, there was a significant risk of complications. I have never seen a case like this before and it was a new surgery for me.’

Fran, a mum-of-three who runs Pets Animal Hotel, in Lymm, said she had no idea what caused the injury.

Air was leaking out under his skin over his whole body, even causing his heart to lift off his sternum, she said. 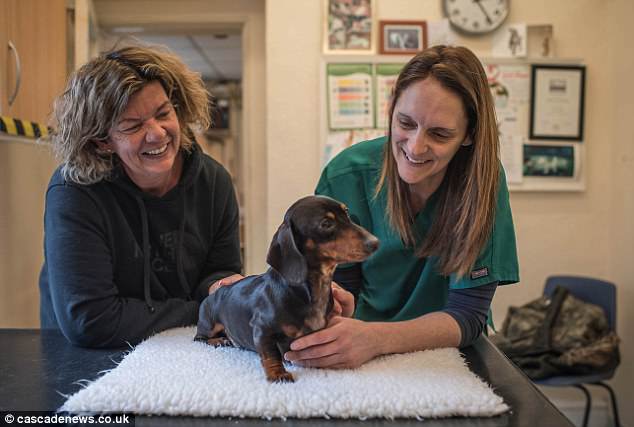 Fran Jennings, left, is pictured with vet Rachel Dean after Trevor was returned to his normal size following the surgery

‘Whatever it was, it affected his breathing so we had to leave him there while they tried to find out what was wrong,’ she said.

Vets discovered a hole in his windpipe which had to be stitched up before the handsome dog could be ‘deflated’.

Trevor was kept in while tests were carried out and he was diagnosed with sub-cutaneous emphysema – an abnormal collection of air under the skin in the lowest level of the skin’s tissues and muscles known as the subcutis or hyperdermis.

Vet Michelle, who works for the Willows Veterinary Group, said: ‘Trevor was presented to us with signs of severe air ingress under the skin.

‘There were no external injuries that would explain how air had got under the skin, so we suspected that an internal injury to the airway or oesophagus could have been allowing the air to leak into the body.

‘Trevor’s surgery went well, he made a quick recovery and was monitored in the hospital. When he came back for his check-ups following the surgery he was very bouncy and happy. 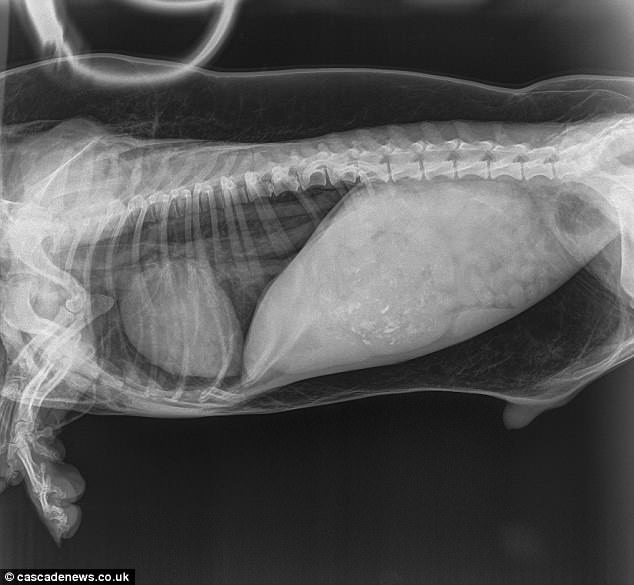 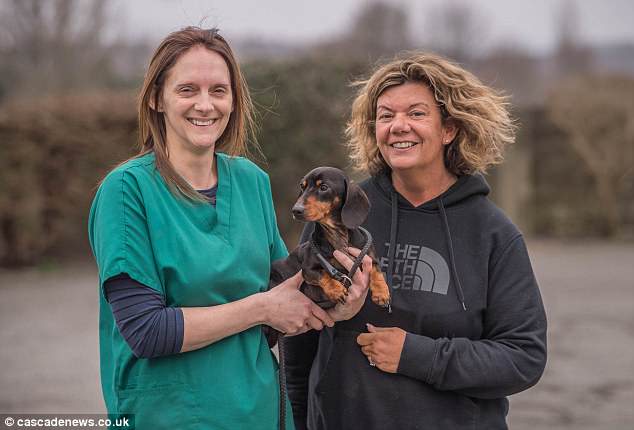 Fran Jennings, right, and Rachel Dean, left, were astounded to witness Trevor’s inflation caused by a leak through his windpipe

‘He’s a great character and everybody loves him. He was a pleasure to nurse. It was certainly an interesting case and one that is unusual as far as I understand. There should not be any long-term impact to Trevor’s health.’

Jessica, who shows sausage dogs at Crufts and helps run the family business said: ‘It was horrible seeing him like that, we had to deflate the air out of him, it was weird.

‘He’s a little sweetie, he’s always running about happy, he looks like he has a big smile on his face, he’s very cheeky.

‘He’s also quite mischievous and often gets up to trouble – that’s why we’ve nicknamed him Tricky Trevor.

‘You know straight away whenever there’s anything wrong with him. But now he’s back to his normal self, chasing the chickens and we wouldn’t have him any other way.’

How Trevor’s breath blew him up 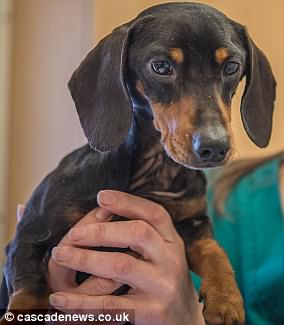 The dachshund was suffering from sub-cutaneous emphysema when his baffled owner found him inflated.

This is the medical terms for an abnormal build-up of air under the skin.

It occurs in the lowest level of the skin’s tissues and muscles, an area known as the subcutis or hyperdermis.

The collection of air was caused by a puncture to Trevor’s windpipe, which allowed air to escape into his body each time he drew breath.

Air building up under his skin lifted his heart away from the sternum as his whole body inflated.

The process could only be halted by first blocking the hole, after which he required deflating to return to his normal size.