The Time 100 Gala drew out some of the biggest names in media on Tuesday night, including the team from Today.

‘Gang’s all here,’ wrote Guthrie in one photo that was posted by her, Kotb and Roker.

The group, which included Guthrie’s husband Michael Feldman, Kotb’s partner Joel Schiffman and Oppenheim’s wife Allison, also posed for an elevator selfie on their way to the event.

Noticeably absent from all these photos on social media however was the newest member of the Today team Megyn Kelly. 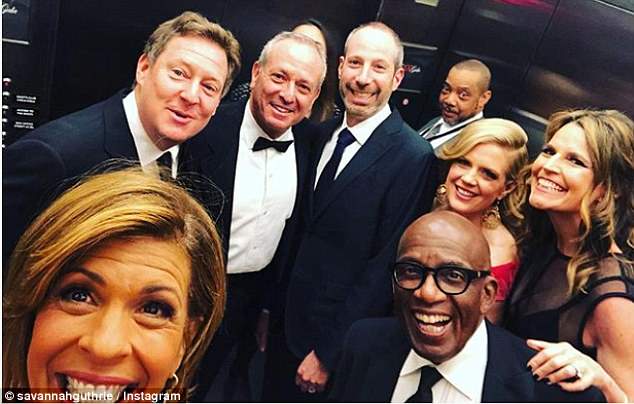 Squad: The group all shared photos of themselves at the event on social media, with Megyn Kelly noticeably absent 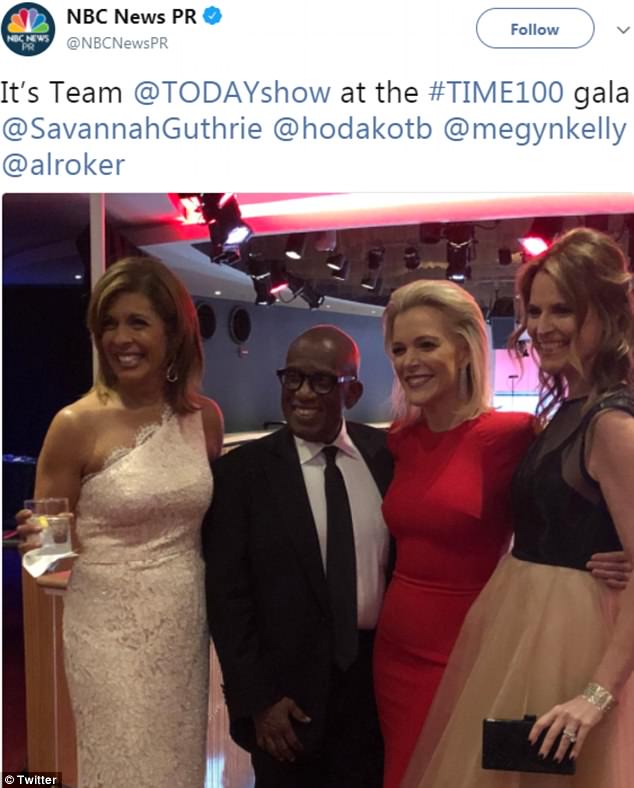 Come together: Kelly did later pose for photos with Roker, Kotb and Guthrie that were shared by the NBC News PR team and had Guthrie on Megyn Kelly Today on Wednesday 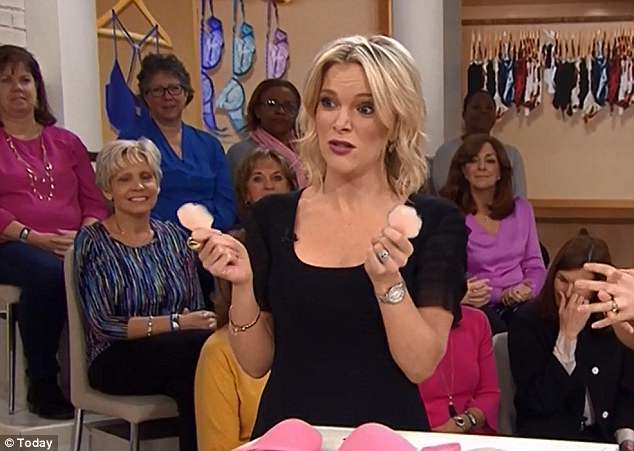 Making a point: On Wednesday morning’s episode of Megyn Kelly Today the host informed her audience that she wore nipple covers (above) to the gala, saying ‘and they work’

Kelly arrived at the event with her husband Douglas Brunt in a stunning red dress by Alex Perry that featured a full lace back.

She did later pose for pictures with her  two honored co-workers, one of which was shared by the NBC News PR social media account.

The three ladies and Roker also got a few pictures together, and Guthrie stopped by Megyn Kelly Today on Wednesday to recap the night.

On the show Kelly also informed viewers that she was wearing nipple covers under her $2,170 gown.

‘And they worked,’ Kelly told the audience during a Best Bras for Your Body segment.

It was a particularly hectic night for Kotb, who had been filming the fourth hour with Kathie Lee Gifford in Italy earlier in the day.

She then hopped on a plane and returned to New York in time for the Time 100 Gala, where she proved to be one of the most popular guests in attendance.

In addition to their Today co-workers, Kotb and Guthrie also posed for a pic alongside CBS This Morning anchors Norah O’Donnell and John Dickerson.

Gayle King was also in attendance but seemed to be keeping a low profile after arriving with her CBS cohorts.

And while Kelly, a former Time 100 honoree, may not have had her co-workers by her side on Tuesday, she did have the next best thing – Wonder Woman.

The media personality ran into Lynda Carter as she headed into the event, with the two women playfully posing for photographers on the red carpet. 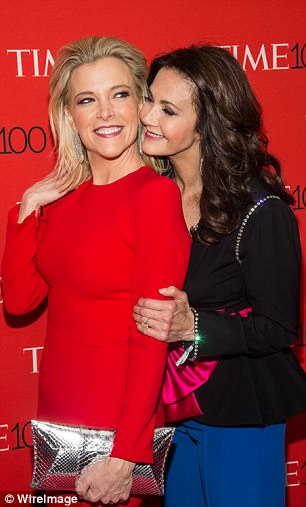 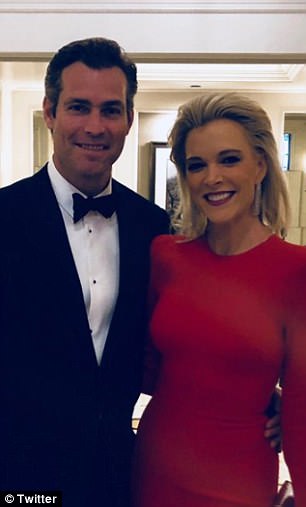 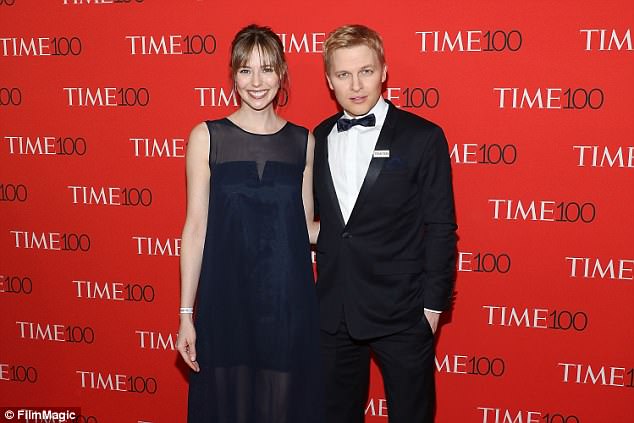 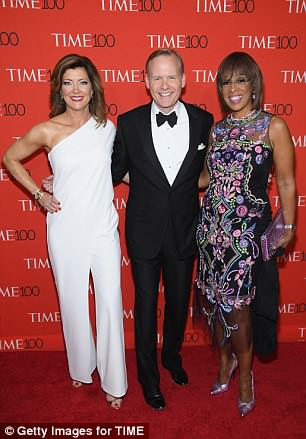 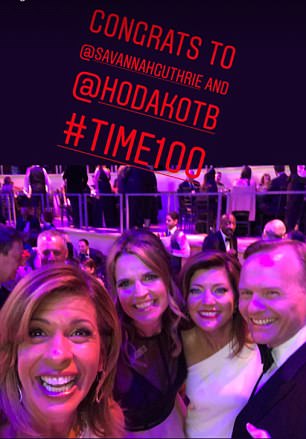 Pals: In addition to their Today co-workers, Kotb and Guthrie also posed for a pic alongside CBS This Morning anchors Norah O’Donnell and John Dickerson 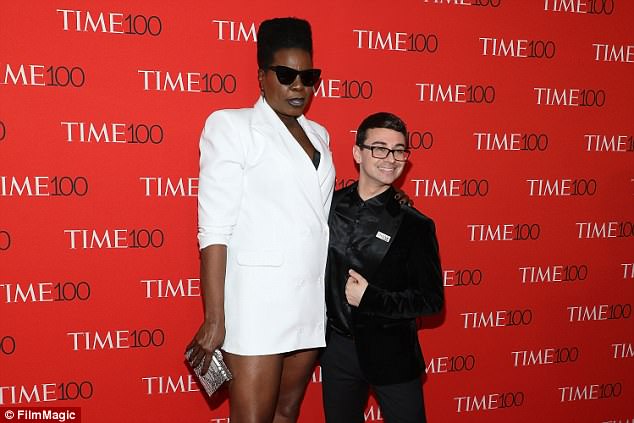 Today also had Willie Geist on the scene Tuesday, who spent the event sitting down with some of the honorees for interviews that ran on Wednesday morning.

It marked a rare weekday appearance from Willie on Today, whose mornings are spent filming Morning Joe over on MSNBC.

The Time 100 list was the youngest ever this year, and it showed on the red carpet. 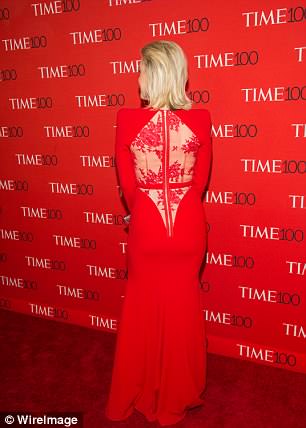 Bare it all: Kelly shows off her lace back

Rachael Denhollander, 33, was a victim of Larry Nassar who managed to bring the pedophile doctor down by going to law school and learning how she could fight the man who molested her as a child.

She celebrated her Time 100 honor alongside another victim, 23-year-old Aly Raisman.

The pregnant lawyer was profiled by the Gold-medal winning gymnast for the magazine.

And for the big night Siriano dressed his 50-year-old muse in a look inspired by her muse, Grace Jones.

Olympian Adam Rippon, 28, continued to dazzle all who meet him, and used his status as a member of the Time 100 to met fellow honoree Nicole Kidman.

Video of that encounter then showed Kidman smelling Urban and saying: ‘Yum.’ 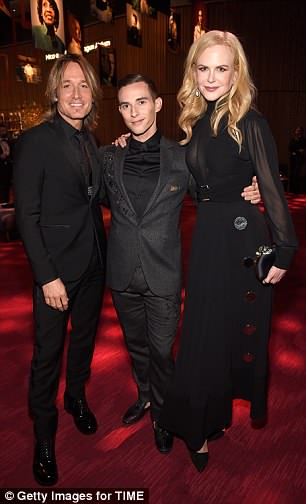 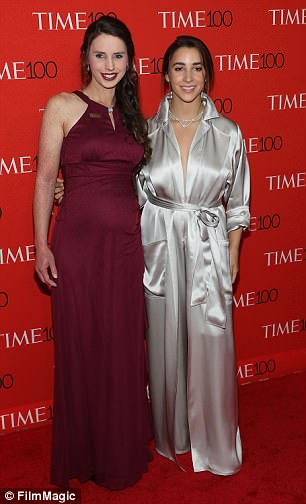 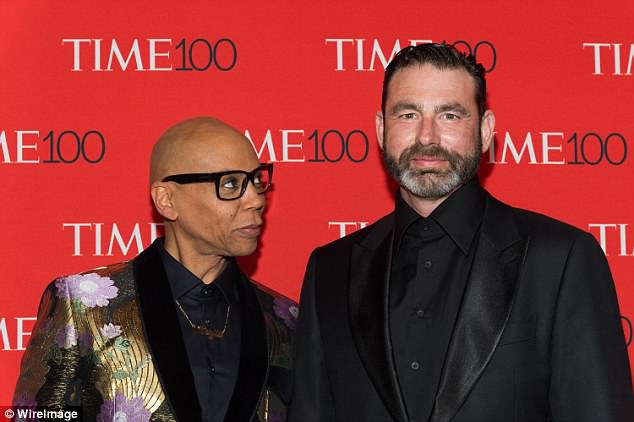 Happy hubbies: RuPaul showed up with his husband and longtime partner Georges LeBar in a rare publiuc outing and the first since the two men were wed last year 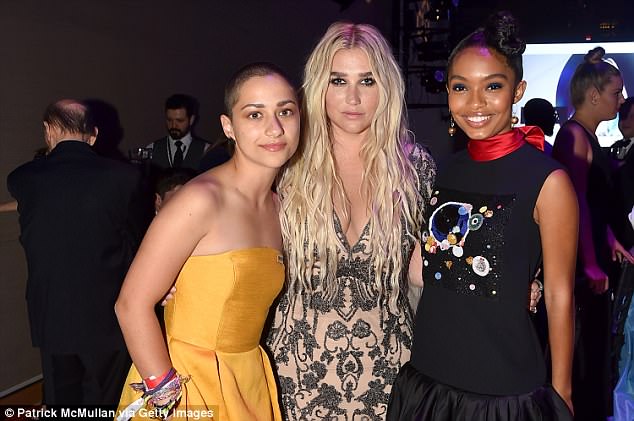 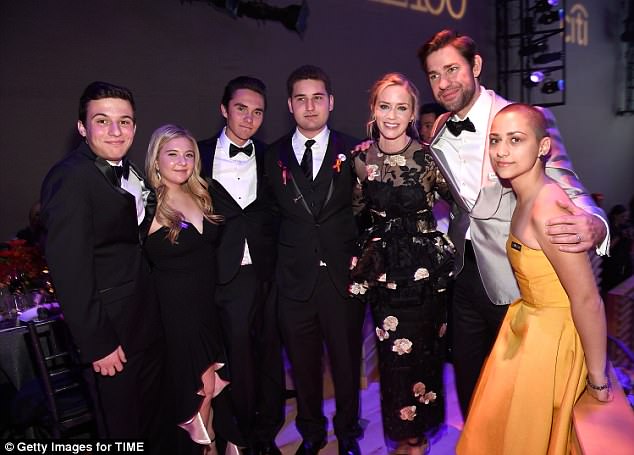 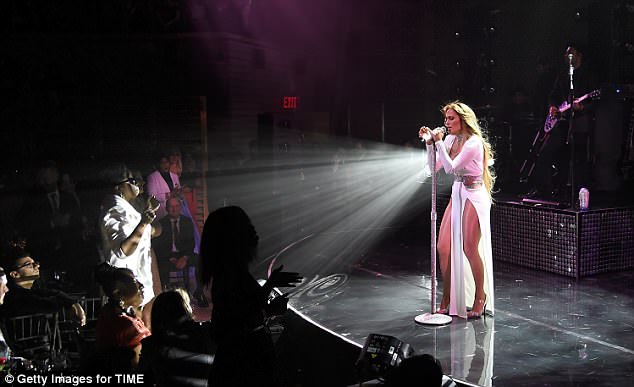 Les Jo and J Lo: Jones gets down as Lopez performs for guests on Tuesday

The Parkland students, who were honored for their work trying to bring about gun reform, got to rub elbows with John Krasinski and Emily Blunt at the gala.

Krasinski was honored by Time for his work as the director and star of the box office smash A Quiet Place, which has made close to $175 million at the box office. 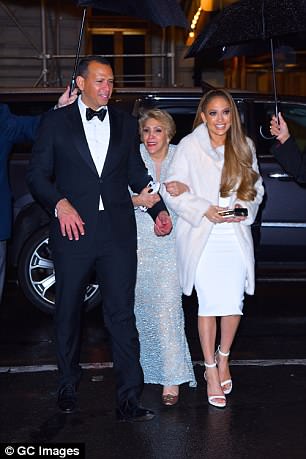 Lopez arrived with her mother and Alex Rodriguez to The Polo Bar after the gala, wearing the last of her five looks

That selection was a bit of a surprise as the movie did not come out until the magazine was going to print.

The students were not joined sadly by the individual who wrote their profile, Barack Obama.

She then swapped looks to take the stage and perform for the crowd, kicking off her set in a white fur coat and then showing off another plunging gown in white.

The two biggest surprises on the red carpet however may have been the guests of honorees RuPaul and Ronan Farrow.

The former showed up with his husband and longtime partner Georges LeBar in a rare public outing and the first since the two men were wed last year.