As a pride of lions took their first tentative steps into their new habitat, Ivan Carter proudly whispered to the camera: ‘This is the front line of conservation.’

The TV presenter and safari guide had been instrumental in one of history’s ‘biggest recovery projects’ that had seen dozens of big cats relocated to an area of Mozambique ravaged by poachers.

But The Mail on Sunday has unearthed an earlier video of Carter revelling in the slaughter of elephants and lions, and eulogising about the merits of a powerful double-shot rifle.

Mr Carter, who set up the non-profit Ivan Carter Wildlife Conservation Alliance (ICWCA), was filmed stalking the animals in a designated hunting area in the Zambezi Valley of southern Africa.

He praises the gun in his hand – a weapon made by German manufacturer Heym – saying its double-action shot allows trophy hunters to secure a kill quickly.

In one clip, the Zimbabwean-born hunter leads viewers through the savannah towards a lion his group had ‘wounded several hours previously’.

Over the footage, he explains: ‘My first shot went right in just underneath his chin. It was enough to turn him.’

The injured lion is then heard growling and, as it prepares to pounce, is shot again ‘just on the cheekbone’.

Mr Carter, 50, then turns to the camera and says that ‘without a double gun, I would have been busy reloading as he took off and got on top of me’.

In another scene, he guides a trophy hunter through an elephant kill and declares ‘brilliant second shot in the earhole’ as the creature collapses.

The gruesome video was uploaded to the internet in July 2012 but taken down last week after The Mail on Sunday contacted Mr Carter. 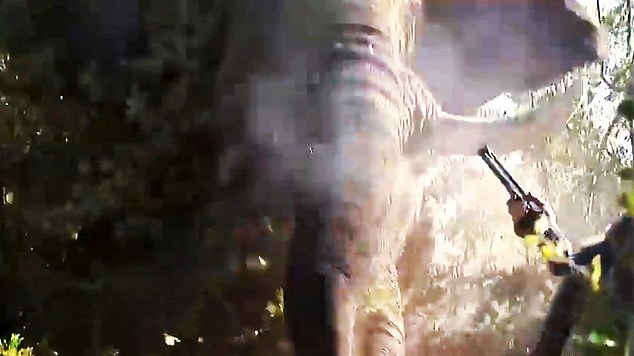 Asked about the footage, he said he no longer made promotional gun videos and that revenue from hunting is used for conservation.

According to records kept by Safari Club International, a US-based organisation dedicated to protecting the right to hunt, Mr Carter has helped clients to shoot some of the world’s biggest animals.

Yet quotes attributed to Mr Carter on the ICWCA’s website say: ‘I have been truly shocked to find how precarious the future of our wildlife is.’ It also poses the question, ‘Can Carter’s quest to save Africa succeed?’, while his TV show Carter’s War, which is broadcast on the Outdoor Channel, documents his battle to save his ‘dying’ homeland.

Mr Carter, who is primarily based in South Africa, was part of US President Donald Trump’s International Wildlife Conservation Council in 2018.

The now-disbanded group wanted to make it easier for hunters to bring body parts of endangered species into the US and supported hunting as a means of funding conservation projects.

The claims are revealed in a new book called Trophy Hunters Exposed: Inside The Big Game Industry. 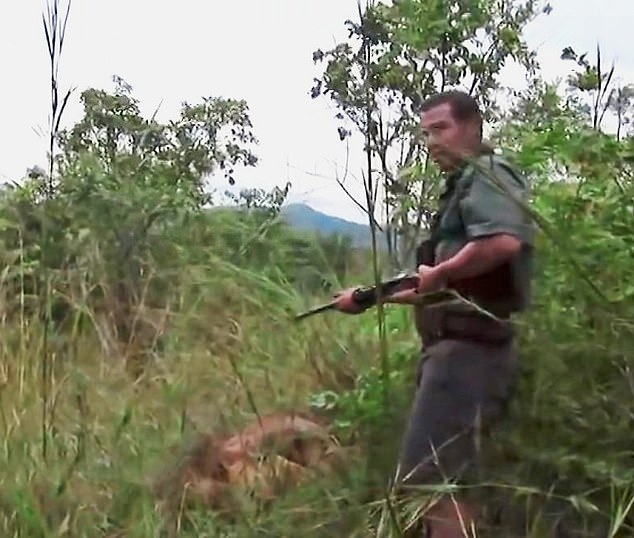 Gruesome: Ivan Carter praises the merits of his double-shot rifle after killing a lion

Its author Eduardo Goncalves, who founded the Campaign To Ban Trophy Hunting, questioned the assertion that hunting aids conservation.

‘British hunters are among the worst in the world. Ivan Carter has been helping hunters shoot some of the biggest elephants known to man. How can he claim to be a conservationist and keep a straight face?’

Defending the shooting of big-game animals, Mr Carter said: ‘If you are killing an animal when it’s old and when its genes have already been passed on, there’s no impact to the remaining population of wildlife. That animal can be used to generate revenue and protein for the local community.

‘We need to consider the most likely way for this ecosystem to support itself. I am very pro a sustainable non-hunting method, but other times the hunting model is the only one that can work.’

He said the video was his last for Heym because of the ‘emotional reaction that precludes people from being able to understand the conservation that happens behind it’.

Heym did not respond to a request for comment.