Generations divided by love, scandal and secrets – tick! Extravagant costumes and ostentatious wealth flaunted by two sparring families with million-dollar hairdos – tick! A wrestling match that ends with a plunge into the pool – tick!

Fans of the ultra-camp Eighties serial Dynasty might be forgiven for feeling that A Suitable Boy (BBC1) had a familiar flavour, even though the Beeb’s sumptuous new Sunday-night drama is set not in Colorado but the fictional Indian city of Brahmpur.

Novelist Vikram Seth, who published his 1,400-page magnum opus in 1993, was a devoted fan of Dynasty, watching every episode avidly during the long years he spent writing this saga. 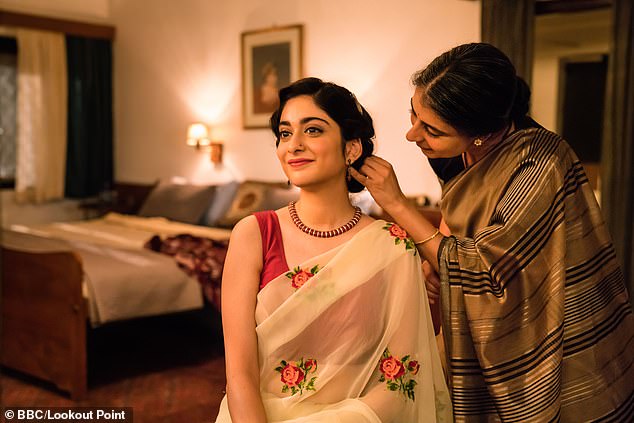 A Suitable Boy (BBC1) is set in the fictional Indian city of Brahmpur in 1952, five years after India won independence from the British Empire. Pictured, Tanya Maniktala (centre) as Lata alongside Mahira Kakkar, who plays Mrs Rupa Mehra

When the book first appeared – earning Seth a rumoured £600,000 advance (worth £1.25million today) – the writer gave a rare interview in which he admitted his story could be described as ‘a soap opera’.

‘I was hooked on Dynasty,’ he revealed. ‘I used to sit there with my mouth open, wondering what would happen next.’

Perhaps the infamous catfight between Joan Collins and Linda Evans, as warring wives Alexis and Krystle, which ended in a swimming pool, was the inspiration for the key scene in the first episode of A Suitable Boy – as spoilt, immature Maan Kapoor (Ishaan Khatter) pushed a pompous and furious government minister into a fountain.

Maan is the tale’s romantic hero, though he’s far from the usual saturnine, glowering beefcakes of costume drama. He can’t stop chattering, for a start.

He swigs whisky from a hip flask, spills food down his silk shirts and, when we first meet him, there’s a strong hint that his sensuous nature involved liaisons with young men as well as women.

You won’t find that in a Jane Austen novel. It’s a bit racy – even for Dynasty.

Maan soon lost his heart, to a most un-suitable girl – a courtesan twice his age, whose lovers included the local rajah. As if all that wasn’t shocking enough, she’s a Muslim and he’s a Hindu.

That religious divide runs like a fault line through this epic story, ready to rip everything apart. Set in 1952, five years after India won independence from the British Empire, it is a schism that threatens the future of all the characters – and there are dozens. 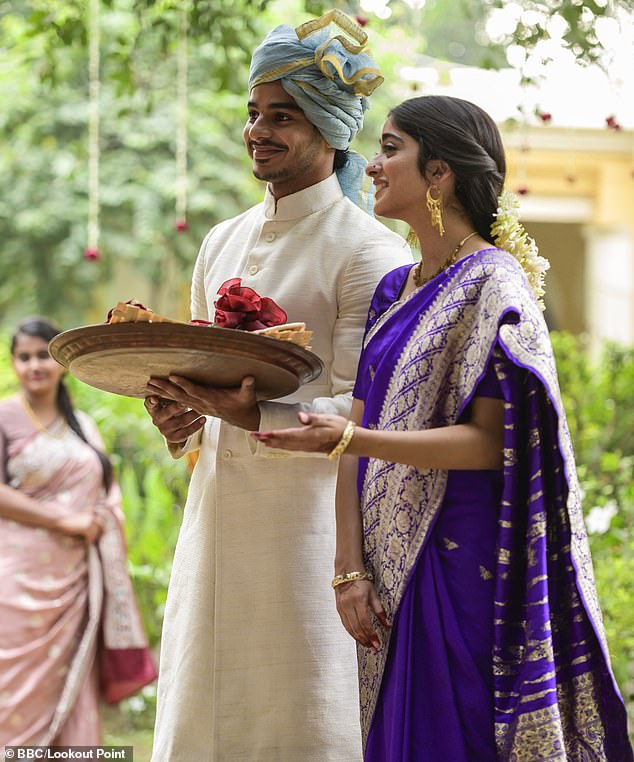 To capture the sheer magnitude of Vikram Seth’s great 1,400 page book on screen, the BBC has assembled an extraordinary cast, including Ishaan Khatter and Tanya Maniktala (above), who star as Maan and Lata

We met most of them in the vibrant whirl of a wedding during the first ten minutes of this vivid series. The brothers, sisters, uncles and aunties, friends and neighbours were so many that at first it was difficult to keep track as the camera weaved through the crowd.

But screenwriter Andrew Davies’s script kept returning to the central theme: the determination of Mrs Rupa Mehra (Mahira Kakkar) to arrange a marriage for her younger daughter, Lata (Tanya Maniktala) – a modern Miss who has no intention of obeying her mother.

Instead, Lata falls for a fellow student at the university, with tousled hair and a taste for poetry. His name is Kabir and naturally, since Lata is Hindu, he’s a Muslim. Wait till Mrs Mehra hears about it!

For a first date, Lata and Kabir visited the local poetry society to hear readings from T.S. Eliot. Safe to say that this scene wasn’t pinched from Dynasty, but it is one that draws on Seth’s own life. Born in 1952 (the year of his story), he first won acclaim as a poet.

When he decided to write a novel to rival War and Peace, Seth returned to the home of his middle-class parents in northern India. His mother’s large family came from Uttar Pradesh, while most of his father’s relatives were across the border in Pakistan – both divided by partition in 1947.

For six years he remained in his room to work on the book, waking at noon and writing till midnight. His parents would have a servant leave food outside his bedroom door. 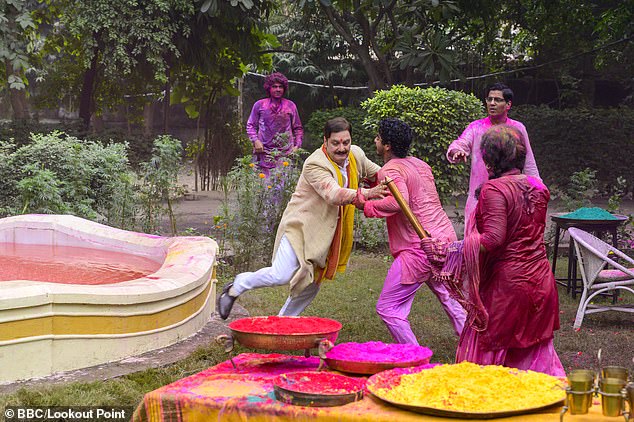 The flamboyant scenes at a religious festival (above), where Maan and his siblings were hurling fistfuls of paint powder, looked like an explosion in the Farrow and Ball factory

Towards the end, his writer’s cramp became so bad he was unable to hold a pen, and had to dictate pages to a secretary.

To capture the sheer magnitude of his great book on screen, the BBC has assembled an extraordinary cast – some newcomers, other Bollywood superstars.

Best of them all is Tabu – born Tabassum Fatima Hashmi but so famous in India that she has only one name – who plays the seductive Saeeda Bai.

In her scenes with the lovestruck Maan, she conveys not only the wiles of a professional flirt but also the wariness. It’s clear from the way she flinches from his grand gestures that Saeeda has been brutally mistreated by men.

The colours of her palatial rooms give her the appearance of a figure in a traditional Indian painting, an impression heightened by the poses struck by the actors.

Just as vibrant are the eruptions of colour in the clothes, gardens and streets. The flamboyant scenes at a religious festival, where Maan and his siblings were hurling fistfuls of paint powder, looked like an explosion in the Farrow and Ball factory.

There has never been a TV drama quite so kaleidoscopic.