Schalke see funny side of 7-0 drubbing by Manchester City

‘I’d like to see Theresa May try and defend against Leroy Sane’: Schalke see funny side of 7-0 drubbing by Manchester City as they respond to Gary Lineker over Prime Minister joke

Schalke’s crushing 7-0 defeat at the hands of Manchester City suggested the team were not clicking in the Champions League on Tuesday, but on Twitter they were in fine form.

The German club’s social media pages responded to the tough evening with a series of entertaining and widely shared posts.

Gary Lineker tweeted: ‘At this rate Schalke might lose as heavily as our Prime Minister.’ 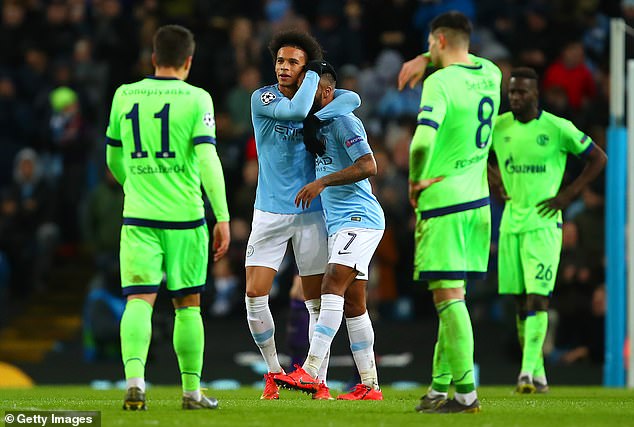 In response to the reference to the day’s Brexit vote, which Theresa May lost by 149 votes, Schalke’s English Twitter account said: ‘I’d like to see Theresa May try and defend against Leroy Sane.’

Sane, who began his professional career at Schalke, provided three assists in the match, as well as City’s third goal. 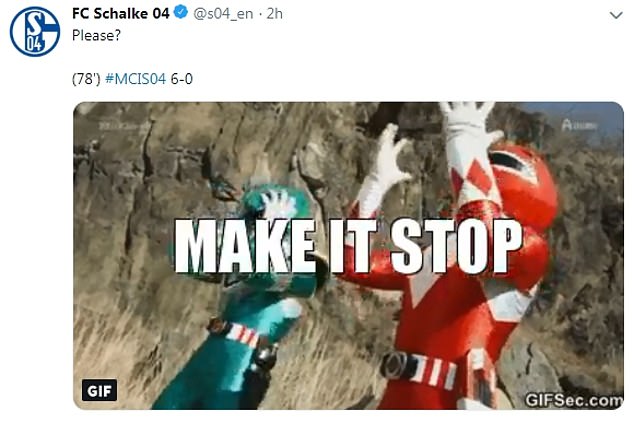 As the goals continued to be fired in, Schalke’s Twitter accounts begged for the hardship to end.

‘Make it stop’ read one GIF, while another from the club’s US account saw Sir Patrick Stewart’s Star Trek character Jean-Luc Picard declare: ‘That is enough, damn it!’

By the time the seventh goal was curled in by Brazilian Gabriel Jesus, the Bundesliga side appeared desparing.

‘Please tell me this is all a bad dream,’ the club tweeted.

In the end, the club could only apologise to the travelling fans for the performance.

‘Thanks for all your support,’ they tweeted. ‘We can only apologise for tonight.’

The club have also gained a number of Welsh fans in recent months, due to the addition of Wales international Rabbi Matondo to their ranks.

The 18-year-old’s addition has seen the club regularly tweeting in Welsh, so in response to the game the club added: ‘Guess we’ll go to Wales next time.’