School administrator who dressed as a flasher for Halloween faces demotion and a $44,000 pay cut

A school administrator in Florida faces a demotion and a $44,000 pay cut because she showed up for a work Halloween party in a risky ‘flasher’ costume.

The social media posts of Mary Catherine Coker of the Broward County Public Schools landed the official in trouble when they appeared online on November 1.

Complaints filed against Coker, 46, claim that employees couldn’t tell if the costume was ‘fake or if she was really naked under the coat’.

Coker, who is the district’s director of procurement and warehousing services, wore the costume at an event attended by children.

At one point flashes the crowd, getting laughs in return.

Mary Catherine Coker of the Broward County Public Schools (second from left) is pictured at a Halloween party inside a school office. She is wearing a hat, sunglasses and a dark coat over a nude woman’s body suit 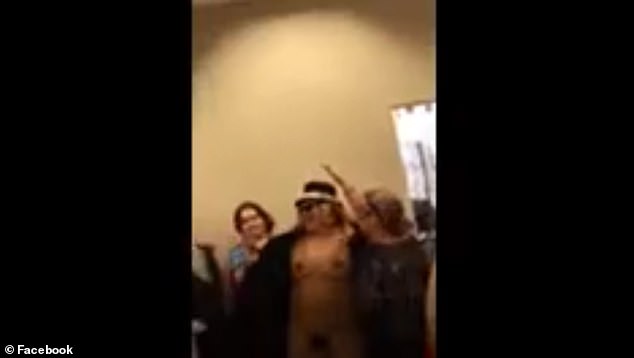 Coker, who is director of procurement and warehousing services at the Broward County Public Schools, is pictured flashing the crowd

A complaint filed with the school district said Coker showed up at the school party wearing a costume of ‘only a black coat and hat, with a tight fabric underneath which replicated a naked female body’.

During the party, ‘Coker inappropriately “flashed” children, staff and colleagues,’ according to the complaint.

Employees were offended and some said they couldn’t tell if the costume was fake or she was really naked under the coat.

After flashing party goers, Coker said, ‘Hey everybody, relax, please erase the pictures,’ according to the complaint.

Coker earns $154,286 as the district’s director of procurement and warehousing services.

Superintendent Robert Runcie plans to ask the school board Tuesday to demote Coker to manager of materials and logistics, a position where the most she could get paid is $110,701, the South Florida SunSentinel reported.

Runcie alleges a wide range of offenses, including indecent exposure, lewd and lascivious behavior, incompetence, willful neglect of duty and failure to comply with school board policy.

School board member Nora Rupert has questioned whether the recommendation is too severe, since Coker had no prior discipline and received ‘highly effective’ evaluations.

The school district, however, wasn’t impressed by the post made by MyBlackBroward.com, reports the Bradenton Herald.

A spokeswoman for the seventh largest school district in the US told the news outlet that Coker was put on notice.

The spokeswoman said the district was following up with Coker under its corrective action policy, which says ‘Employees are expected to comply with workplace policies, procedures and regulations; local, state, and federal laws; and State Board Rules, both in and out of the workplace’.

No specifics were release about what was going to happen to Coker, 46, who makes about $150000 a year and is among the highest paid officials in the district, Bradenton Herald reports.

‘Our office is not able to provide additional information at this time’, the spokeswoman wrote to the news outlet. 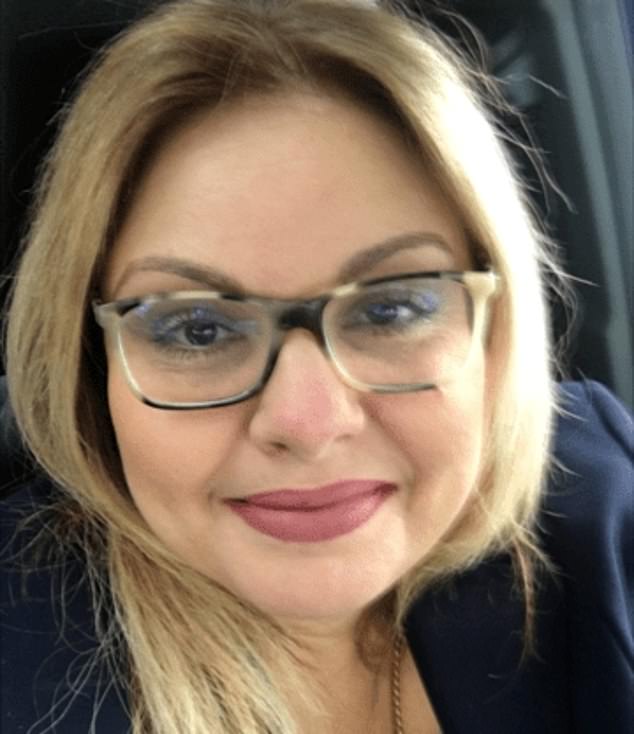 Mary Catherine Coker, who is director of procurement and warehousing services at the Broward County Public Schools, was put on notice for showing up dressed as a flasher at a Halloween party that appears to have happened in a school office with children present

The spokeswoman did not immediately respond when DailyMail.com reached out Friday.

Reached by phone, Coker said she ‘wouldn’t elaborate’ on whether the photo was taken at work, Bradenton Herald reports.

Coker noted she was in a staff meeting with about 50 people and would provide more information later.

She did not immediately return a call from DailyMail.com.

The administrator speaks to the crowd in one of two videos of the costume incident.

‘I understand and respect that some people don’t celebrate Halloween, and that’s perfectly fine’, she says. ‘It’s more of a, you know, just dress up as whatever’.

She adds, ‘It’s come together and have a good time, and you know, look at me’, as the crowd laughs.

The video ends with a costume contest, which Coker does not win.