The School Standards minister this morning said he would ‘take a knee’ in the right circumstances – less than 24 hours after the Foreign Secretary was hit by a backlash by saying he wouldn’t.

Appearing on Radio 4’s Today Programme, Nick Gibb said he would take part in the gesture, which has been used at demonstrations all over the world since the killing of George Floyd by police officers in the US.

It comes shortly after Dominic Raab prompted outrage by comparing the protest to something out of popular TV series Game of Thrones.

He said that to ‘taking a knee’ felt to him ‘like a symbol of subjugation and subordination rather than one of liberation and emancipation’.

Appearing on Radio 4’s Today Programme, Nick Gibb said he would do the gesture, which has been used at demonstrations all over the world since the killing of George Floyd by police officers in the US

He accepted other people ‘feel differently’ and insisted he understood the ‘frustration’ felt by oppressed communities, but added: ‘I take the knee for two people, the Queen and the Mrs when I asked her to marry me.’

This morning, Mr Gibb said: ‘In the right circumstances yes of course, but my focus, the focus of the government and work that I do is making sure that we address the injustices that are the subject of these campaigns.

‘It’s wonderful we have a country where you can protest, can make your views clear that we are a tolerant and open society that’s been built on over the centuries, of waves of immigration around the world.

‘And that’s why our culture in this country is so vibrant and welcoming.’

He added that government is committed to making sure children from all backgrounds have the best education possible, and that school improvement has been successful.

Mr Gibb said: Black children are doing better than ever in our schools, there are more young pupils from black communities going into our universities, it’s risen from 44 per cent to something like 59 per cent going to our universities.

‘So this is an absolutely key part of our education agenda and its also part of the government’s agenda.’

Mr Raab’s comments on TalkRadio yesterday morning drew widespread anger, including from Labour’s Diane Abbott who condemned the Foreign Secretary for no knowing the origins of the protest.

He later tried to cool the situation by tweeting that he had ‘full respect’ for the BLM movement and people were entitled to ‘choose’ whether to take the knee.

The ‘taking the knee’ protest was started in 2016 by American football player Colin Kaepernick. 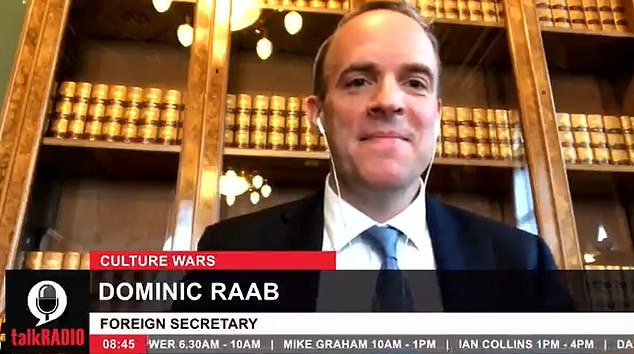 He famously knelt for the US national anthem before playing for the San Francisco 49ers, to demonstrate against police brutality.

Kaepernick said at the time: ‘I am not going to get up to show pride in a country that oppresses black people and people of colour.

‘To me, this is bigger than football, and it would be selfish on my part to look the other way. There are bodies in the street and people getting paid leave and getting away with murder.’

The action was hugely controversial in the US, with critics saying it disrespected soldiers and the flag. It was banned by the NFL amid anger from Donald Trump, and many believe it destroyed Kaepernick’s career.

It has been widely adopted around the world following George Floyd’s death, and was used by Premier League footballers before matches this week.