School tells parents children must be in bed by 9pm

Barry Smith, who’s taking over from Louise Jackson, has been brought in to urgently sort out the school and get it back on track

Pupils are being told to be in bed by 9pm every night and up at 6.30am in a tough crackdown launched at one of the country’s worst schools.

Children have also been warned they face losing their mobiles for weeks, to walk in single file in corridors and that teachers are the ‘unquestioned authority’ at the Norfolk school.

And they’re being told that they’ll be given buckets to vomit in if they feel sick in class.

Furious mothers and fathers have already set up a group on Facebook called Yarmouth High Worried Parents after being outraged by the new get-tough crusade.

The hardline regime is being imposed as troubled Great Yarmouth High School in Norfolk became a Charter Academy last month after being taken over by the Inspiration Trust.

A new principal was drafted in after the failing school got some of the worst GCSE results in England and Wales in the summer – with just 30pc of pupils achieving a pass in English and maths.

Barry Smith, who’s taking over from Louise Jackson, has been brought in to urgently sort out the school and get it back on track.

He is co-founder, and former deputy principal, at the notoriously strict Michaela Community School in Wembley Park, north-west London.

It has built up a reputation for being one of the toughest schools in the country.

Mr Smith has written a no-holds-barred letter to parents setting out his high expectations and standards.

And a series of behaviour rules at the school, which has about 1,000 pupils aged from 11-16, written in an internal document has been revealed.

They include confiscating phones if they are seen or heard until the end of the next half term – or, if they are taken in the last two weeks of any term, until the following half terms.

It means, the document says: ‘If we confiscated your phone in the last two weeks of summer term we will keep your phone until mid-October.

‘That’s almost four months. If your phone accidentally goes off or accidentally falls out of your pocket we confiscate it.’

Pupils who hesitate to hand it over will be put in isolation. It also says that pupils must walk in ‘single file’ between lessons, not talking to other pupils or turning around. 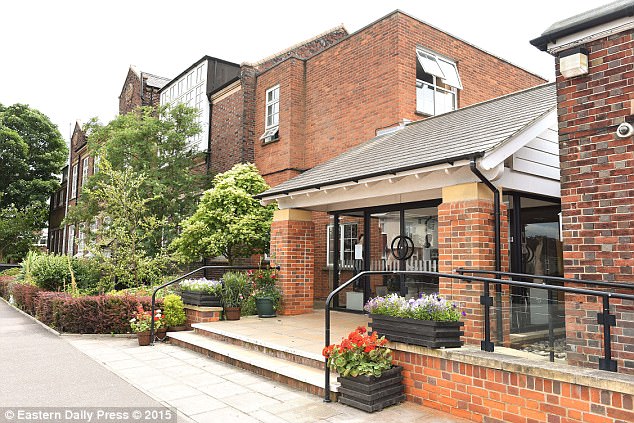 He says in his letter: ‘Children who do not meet our expectations regarding uniform and appearance will be placed in isolation.’

Mr Smith said: ‘Your children will avoid detentions, isolations, or confiscations if you are a supportive parent.

‘The responsibility lies with you.’

Elsewhere, the internal school memo tells pupils they must ‘only ever look at your teacher or where your teacher has directed you to look’ and that they must ‘never get out of [their] chair without permission at Charter’.

It also warns students to not make excuses to get out of learning.

‘You never lie and make excuses like, ‘I just wanted to put something in the bin’.

‘We all know children say things like that to get out of work.

In 2017 Great Yarmouth High School pupils had some of the worst GCSE results in the entire country.

In a typical class of 30 pupils, 21 pupils left the school without even a pass in English and maths.

Charter Academy is a new member of the Inspiration Trust and, as such, has huge resources and expertise behind it.

As the Headmaster of Charter Academy I cannot, I will not, allow the indiscipline, the disrespect, the failure, the bullying, the truancy and the lack of parental support, that were all a part of daily life at the former High School, to continue.

Parents let down their children when parents fail to support their education. As a Charter parent you must support the school 100%. 99% just won~t do.

At times you may think our approach inflexible, over strict, or unreasonable. But I ask that you trust us, and help your children succeed in ways you might never have imagined.

My job, as Headmaster of Charter Academy, is to ensure that teachers and pupils have a safe environment free from abuse, in which they can excel.

Your children~s job is to attend every day on time, follow all instructions first time every time, treat everyone they meet politely, and get the top grades they possibly can in everything they do.

Your job is to support their school and their education. By supporting us you support your children.

This could be the beginning of a whole new life full of possibilities for your children.

To make that happen we need your 100% support.

Below you will find a list of the most basic expectations at Charter. This is just the beginning.

1. Traditional black school shoes in leather or leather look material. Children who do not meet our expectations regarding uniform and appearance will be placed in isolation.

2. No mobile phones on the school site. If a phone is seen or heard it will be confiscated.

3. Girls may wear one small plain gold stud in each earlobe only. No other piercings. No retainers. If ear rings do not conform they will be confiscated.

4. No chewing gum on site. If found with chewing gum pupils will be placed in isolation. Your children will avoid detentions, isolations, or confiscations if you are a supportive parent. The responsibility lies with you. We have a huge task ahead of us, but with your support we can offer all pupils their best possible future and the greatest choices in life.

‘You never pretend to be ill to get out of work because we expect you to work through it. If you feel sick we will give you a bucket. If you vomit – no problem! You’ve got your bucket.

‘That’s probably all your body wanted – to vomit. If you are really ill we will make sure you get all the attention you need.’

There are also instructions for pupils out of school, including ‘as soon as you finish school you go straight home’, a 9pm bedtime and a 6.30am alarm.

Teachers are referred to as the ‘unquestioned authority’ in the classroom.

The Inspiration Trust said the school had now developed a stricter approach – but that it was needed to drive up performance.

Spokesman James Goffin said: ‘This summer Great Yarmouth High returned the lowest GCSE results in the county – and for many years has underperformed compared to other schools in the borough.

‘What they need is the right environment to learn and succeed. Children can’t learn in unruly classrooms.

‘Charter has a stricter approach to things like behaviour and uniform so that everyone gets the chance to learn.’

He added: ‘Our teachers cannot do this alone. We need families to back the school 100pc so pupils get a consistent message at home and in school.

‘Unfortunately there has been a lot of rumour and inaccurate information spread on social media that has understandably concerned some parents and pupils.

‘The academy will be holding a meeting for all parents in the coming days so they can hear first hand what Great Yarmouth Charter Academy is really all about.’

The group branded the school’s new policies ‘army like’ – and is staging a meeting for incensed parents on Thursday (September 14).

Anthony Finch, who is stepfather of a student at the school, said: ‘My stepdaughter works hard, is an excellent student and has a great deal of potential.

‘I am appalled to see her afraid to attend school.’

Mother Tracy Cole said: ‘Love to know why my daughter was put in isolation today and made to cry on her first day back.

‘I’m fuming, thing is she doesn’t even know why she was put in there.’

Kerry Herod’s daughter was apparently told retractable pens were not allowed in the school as they could be clicked and become distracting.

She’s now battling to get her upset daughter transferred to a different school.

But other parents are backing the changes – and highlighted the turnaround of the Michaela School as it’s been hailed ‘outstanding’ by education watchdog Ofsted.

One parent said their son, who has behaviour issues, had come out of school happy for the first time.

Cheryl Ann Gardin said: ‘No parent wants to hear bad reviews about their kids but let’s face it, our children aren’t little angels in the home so you can bet your bottom dollar they’re even worse at school.

‘That school was a joke before and I’d bet money it’s about to turn around for the better.’