Schoolboy, 15, killed himself after months of abuse

A teenage boy killed himself in his bedroom after suffering months of abuse from bullies who were jealous of the attention he got from girls at school.

Brandon Rayat was just 15 when he hanged himself after being tormented by other teenagers who called him a paedophile – and even threatened to rape his mother.

The schoolboy, from Leicester, became so distraught by the bullies that he began to suffer from mental health issues.

His mother Mina even quit her job as a hairdresser to support her son and although she begged for him to be sectioned, he took his own life after being picked on.

The youngster’s parents first became aware of the bullying their son was suffering in April 2015 and he later went on to try and take his own life on a number of occasions.

She said: ‘The bullies got in his head and sucked the life out of him, it just wasn’t Brandon.

‘Brandon was a handsome boy and a lot of girls took a shine to him as he got older, I think the bullies were jealous of that.

‘He even shaved his hair off so he could be like them, he just wanted to be accepted.

‘He wanted to go to university and become a doctor, he had his whole life planned out. But these boys were relentless.

‘He used to love school, but within a few weeks of the bullying starting, he was asking us to move to another country so he would never see them again.’

The schoolboy suffered both physical and mental abuse as well as online torture because of the bullies every day for more than one year. 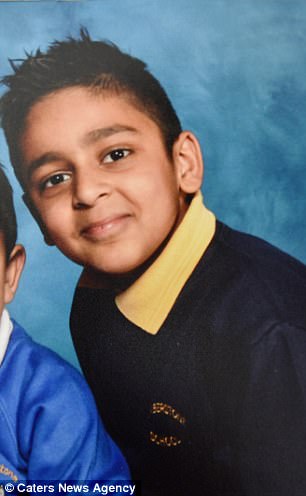 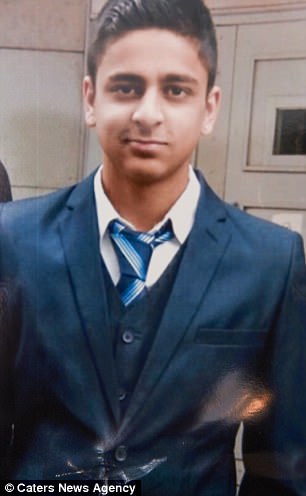 The youngster (pictured), from Leicester, tried to kill himself earlier in 2016 before he hanged himself in August last year

He refused to leave his home for fear of seeing his tormentors and could no longer attend school.

His parents, Mina and Raj Rayat, vowed to get justice for their son after bullies taunted him by sending him messages from a social media account in the name of Jimmy Savile and made rape threats against his mother.

Brandon had broken up with his girlfriend in February 2015 but it wasn’t until April that his parents realised that the bullying was serious when he had a breakdown.

His mother added: ‘Some of his friends told us that he got a lot of attention from girls at school who liked him and that went against him.

‘He had started telling me he didn’t want to go school and that he didn’t like the people there but I didn’t realise how bad thing were until he had the breakdown.

‘He came running into the house one day and he was screaming, ‘I want to die, I want to die’.

‘I had never seen him like this before so I made a GP appointment.’

The teenager was then referred to The Child and Adolescent Mental Health Service (CAMHS) where he attended 11 appointments. 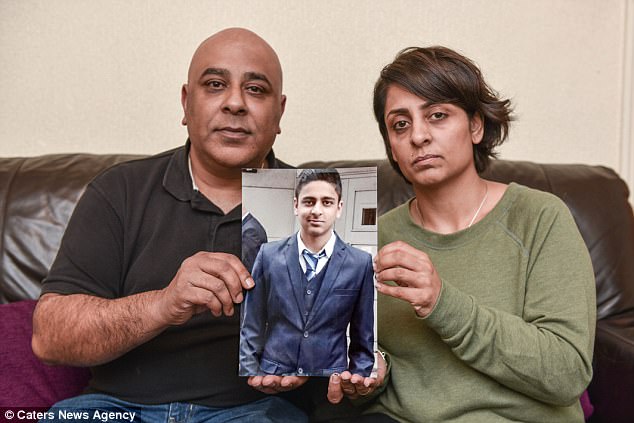 His parents begged mental health professionals to hospitalise their son but were told it would only increase his anxiety levels.

Psychiatrists told the family that the teenager should attend school but things only got worse for Brandon.

He continued to suffer constant abuse when his friends noticed the female attention he received and isolated him, calling him a ‘paedo’ and a ‘f****t’.

During an ICT lesson bullies showed Brandon a Google Maps image of his home and told him, ‘We know where you live, we are going to rape your mum.’

He also ran out of school of two occasions when he was punched by bullies and his mother received messages from other children in her son’s class claiming that tormentors were playing ‘mind games’ with him.

His 41-year-old mother said: ‘We told our son on his deathbed we would get justice for him. The signs were all there but no one would listen.

‘We did everything we could as parents, I felt there was nowhere else to turn but were just passed around like no one cared.

BRANDON TRIED TO TAKE HIS OWN LIFE BEFORE HE HANGED HIMSELF

April 2015 – Brandon has a break down and visits GP, taken out of school

September 2015 – Goes back to school, bullying gets worse

August 2017 – Inquest concludes that Brandon took his own life

‘The bullies got in his head and sucked the life out of him, It just wasn’t Brandon. It’s frightening how bullying can affect the mind so much.’

At an inquest into Brandon’s death, last month, coroners concluded that opportunities had been missed by mental health services to assess him face-to-face after he had told a psychiatrist 11 days before his death that he had tried to put a belt around his neck.

Brandon was initially taken to his local GP after a severe panic attack in April 2015 and was referred to a psychiatrist at the Leicester Royal Infirmary, where he diagnosed him with an acute stress reaction in the context of bullying at school.

In December 2015 Brandon was prescribed anti-depressants which Mina claimed only made her son’s strange behaviour even worse and it was in January 2016, that Brandon first attempted to take an overdose.

The anti-depressant dosage was increased four times over an eight month period as he continued to try and take his own life.

Mina was forced to hide knives and medication in the house as well as taking the lock off his door and removing any hazardous items from his room in fear he would do anything to end his life.

She said: ‘He would have a violent outburst and we would have to call the police, he would hit us and even lock us out of the house.

‘I told the mental health service I was worried that he was planning to do something because he was slowly throwing things away and giving away his belongings, he had nothing in his room.

‘I felt that he was preparing to take his own life but they told me just to keep an eye on him every 15 minutes.’

In August last year, an argument had broken out between Brandon and his father which had turned violent and the police were called.

Brandon barricaded himself in his room before police could stop his final suicide attempt. 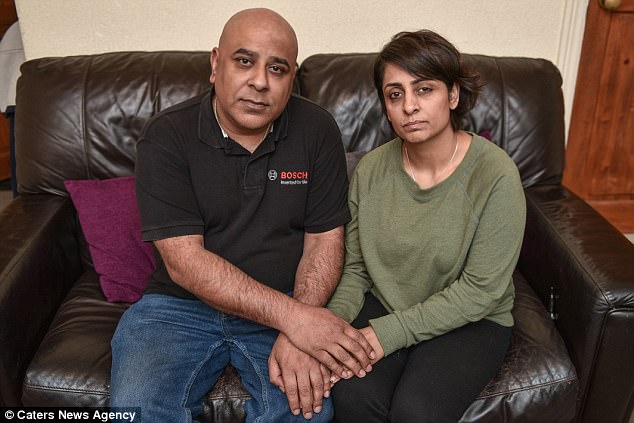 His mother added: ‘Until you lose a child no one understands what you’re going through.

‘I urge parents to take the time to listen to their children.’

Brandon’s parents are now starting The Stop Ignoring Me campaign which aims to criminalise bullying, embed mental health and anti-bullying training into the school curriculum as well as raising awareness of the rise in teenage suicide rates.

Since the inquest, CAMHS has now introduced an outreach crisis team so mental health professionals can treat children in their homes and Brandon’s family hope more positive outcomes can be achieved through their agonising loss.

Mina added: ‘We want to get the message across that there will be consequences for bullies.

‘I’ve had parents come forward who are going through the same, even doctors who know that the system is failing.’

Mina paid tribute to her son and described him as an ‘intelligent’ and ‘kind’ boy and aims to support other families.

She said: ‘Brandon was always making us laugh, even through his illness.

‘He wanted to go to university and become a doctor, he had his whole life planned out.

‘It’s been an emotionally draining process but we will continue to fight for him.’

For confidential support call Samaritans on 116123 or visit a local Samaritans branch, or see samaritans.org for details