A high school graduate celebrating Schoolies on the Gold Coast was rescued from his balcony after trying to climb to a lower floor while high on MDMA.

The teenager was spotted on Elkhorn Avenue in Surfers Paradise about 1am while attempting to scale his fifth floor balcony.

First responders later learned he was trying to get down to the fourth floor.

He didn’t suffer any injuries, but a spokeswoman for Queensland Ambulance said he was taken to Robina Hospital as a precaution.

When he arrived medics learned he had allegedly taken multiple MDMA tablets throughout the night.

Each year school leavers are told of the dangers of hanging off their balconies (Pictured: two teenage school-leavers in 2018 stock image)

‘One small accident in that scenario could have led to tragic consequences for himself, his family and all of his friends,’ Queensland Ambulance Service senior operations supervisor Justin Payne told The Courier Mail.

‘We are also seeing a lot of MDMA use coming through our tent, which is a concern.’

‘A lot of the patients that we treated had taken multiple tablets and there can be long-lasting, ongoing effects from taking illicit substances,’ he said. 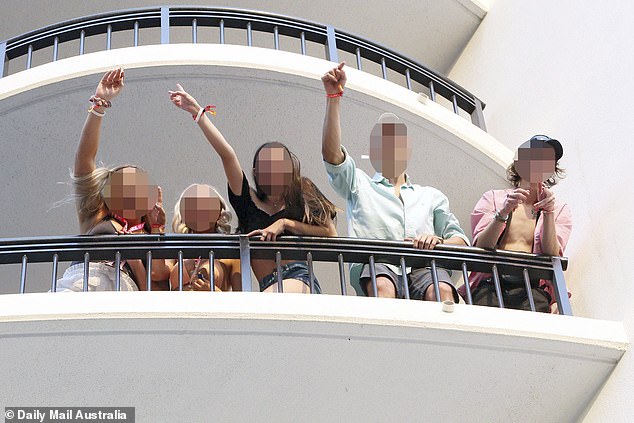 School leavers have been warned ignoring regulations about their balconies could result in them getting fined or kicked out of their accommodation (pictured: a group of Schoolies in 2018 stock image hanging over their balcony)

The policy states failure to comply could lead to eviction from buildings or police arrests, and specifically warns against ‘leaning over, sitting on, climbing or hanging off balconies.’

The warnings were introduced in response to an alarming amount of balcony hopping activities in recent years.

Isabelle Colman, 17, died after falling from a 26th floor balcony at the Chevron Renaissance towers in 2012 while celebrating Schoolies.

In 2016, another 17-year-old was injured falling from a balcony as he leaned over to reach for something he dropped.

Another four Schoolies in the same year were fined for balcony hopping.

Dangerous behaviour on balconies can lead to eviction and even police arrests. The Queensland Government issued tips on balcony safety.