Schools remove analogue clocks from exams because teens read them

Analogue clocks will be removed from exam halls and replaced with digital ones because teenagers are unable to tell the time, claim head teachers.

Digital devices will be installed into exam halls because GCSE and A-level students complained that they were unable to read the correct time.

Students need to be as relaxed as possible in an exam and it adds to their stress if they cannot tell the time, Malcolm Trobe, deputy general secretary at the Association of School and College Leaders (ASCL), said.

He told the Telegraph: ‘The current generation aren’t as good at reading the traditional clock face as older generation.

‘They are used to seeing a digital representation of time on their phone, on their computer. Nearly everything they’ve got is digital so youngsters are just exposed to time being given digitally everywhere.’

He added that it is assumed by the time that students reach secondary school age they are able to tell the time on an analogue clock.

The news sparked a debate on Twitter with many taken a back that children of GCSE age were unable to read a clock face. 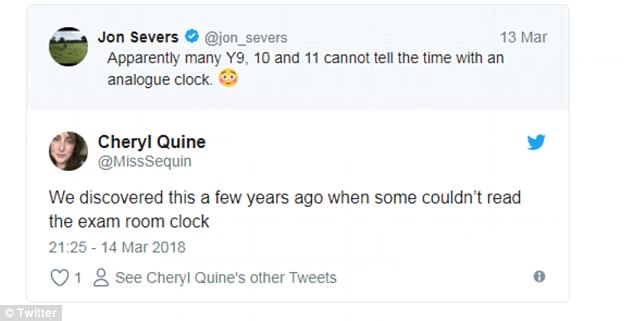 Nicola Towie tweeted that her school had replace the analogue clock with a digital one because pupils couldn’t tell the time.

Paul Weatherall commented: ‘If they can’t read an analogue clock, then they shouldn’t be entered for exams.’

However another user argue that digital clocks are far easier to read so therefore it makes sense to use them.

Many teachers are now finding that students aren’t able to read analogue clocks at GCSE and A level age.

Although they want to encourage children to read clocks they can also see the benefit of digital ones when it comes to exams.

This is because they want to make to make things ‘as easy and straightforward as possible’ for pupils in exam time.

It has been proposed in a bid to stop people putting their hands up to ask what the time is during the exam. 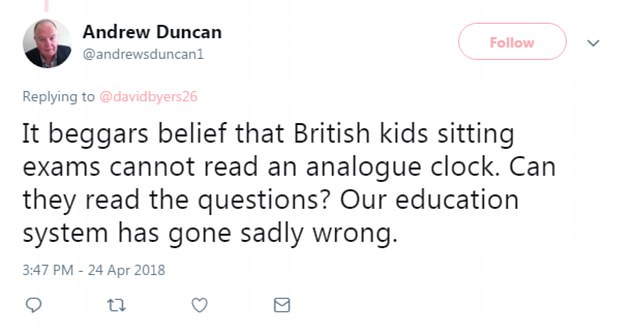 However one social media argued that there are digital clocks for a reason, because they are easier to read, so it makes sense to replace them