President Donald Trump and Senate Minority Leader Chuck Schumer waged a war of words Friday afternoon over the fate of last-minute funding legislation that could head off a partial government shutdown.

Trump insisted Friday afternoon that Democrats will ‘own’ the result, despite saying 10 days earlier that he wouldn’t blame them.

‘It’s up to the Democrats,’ he said in the Oval Office during a criminal justice bill signing. ‘It’s really, the Democrat shutdown, because we’ve done our thing.

Schumer said hours later on the Senate floor that the president ‘has us careening towards a Trump shutdown over Christmas.’

‘President Trump, you will not get your wall. Abandon your shutdown strategy. You’re not getting the wall today, next week or on January 3,’ Schumer said.

‘You own the shutdown,’ he tweeted.

A House bill that would keep the government open passed Thursday evening, but it includes $5 billion to fund construction of Trump’s long-promised wall on the U.S.-Mexico border.

That measure is dead-on-arrival in the Senate unless Majority Leader Mitch McConnell changes the rules to allow for a simple majority to pass it.

But Trump claimed at the White House that ‘it’s up to the Democrats as to whether or not we have a shutdown tonight.’

Senate Minority Leader Chuck Schumer framed a potential government shutdown as President Donald Trump’s fault, while Trump tweeted that Democrats would ‘own’ it if they refused to help pass a budget extension that funds his border wall 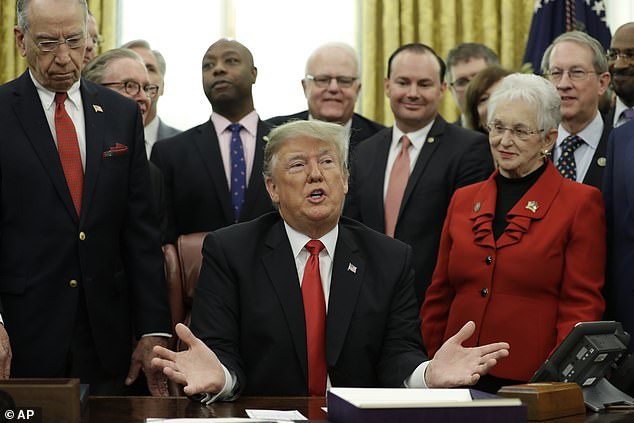 Trump said it’s ‘totally up to Democrats’ whether the government remains open past midnight, just 10 days after insisting that he would take the blame if a shutdown happens 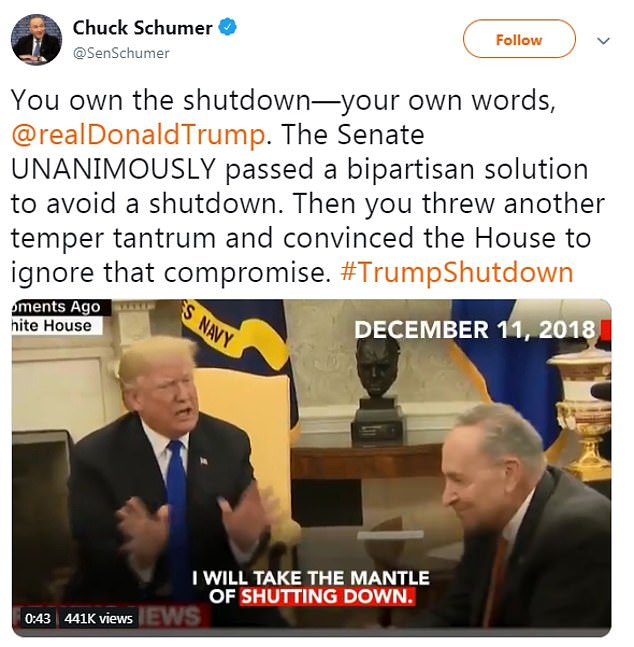 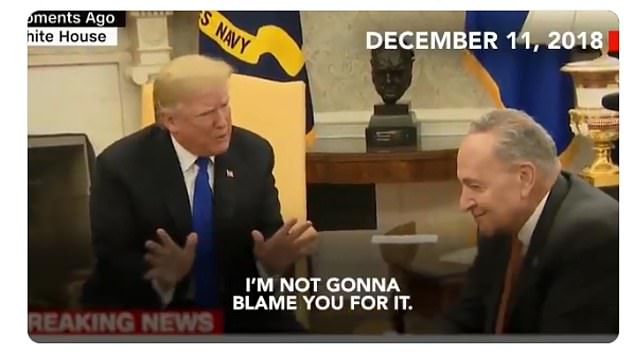 Schumer threw Trump’s December 11 words in his face, tweeting video of the president assuring him that he would take all the blame

Trump had already said he expected a shutdown over the holidays if he didn’t get his border wall funding.

‘Shutdown today if Democrats do not vote for Border Security!’ he said in a tweet.

In the Oval Office, he told reporters that he’s prepared to ride out a shutdown no matter what.

‘We’re totally prepared for a very long shutdown,’ he declared.

McConnell has refused to change the Senate rules for two years, but he said Friday that in any other political environment Democrats would be willing to fund a border wall.

‘Let’s not end this year the way we began it, with another shutdown over the issue of illegal immigration,’ he said in a floor speech. ‘Remember this back in January? All because the Democrats are unwilling to support common-sense measures to address it.’

If the Senate votes down the House bill that has the border wall funding, the president said on Friday morning that he would let the government shutdown rather than sign a Senate-passed measure that does not fund his wall but keeps the government open until Feb. 8.

His spokeswoman said Thursday evening that he wouldn’t depart today for Palm Beach, as previously planned, for his Christmas holiday in the event of a shutdown. 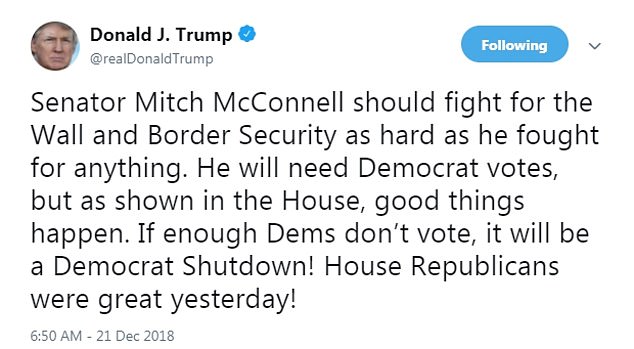 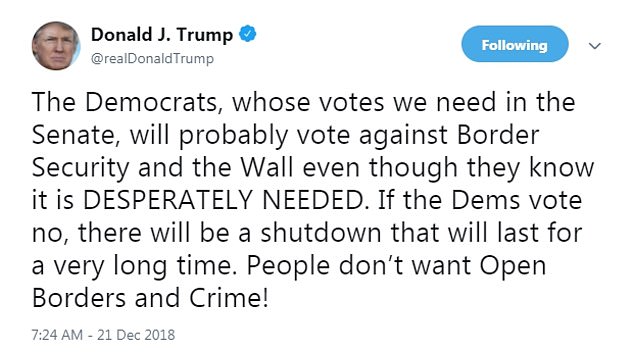 Other than his nixing his own holiday, it wasn’t clear what the president planned to do if there was a shutdown or how long he would let one continue.

‘At this point we’re taking it day by day,’ strategic communications adviser Mercedes Schlapp said. ‘This is a moment in time to get this done. For too long we’ve been waiting for additional funds for border security,’ she added.

The border wall is Trump’s best-known campaign promise. He’s said since the day he jumped into the 2016 race that he would build a wall fight illegal immigration.

White House Press Secretary Sarah Sanders was optimistic on Friday morning about the passage of Trump’s border security measure as she spoke to reporters after a Fox News appearance.

‘Well let’s hope they don’t,’ she said of the likelihood that there will be a no vote. ‘I mean the senate and particularly Senate Democrats have a constitutional duty to protect the people of this country, and we hope they step up and fulfill it today,’ she said.