Scientists in the U.K. have taken the sharpest-ever images of living bacteria, spotlighting the outer protective layer that make some so hard to kill.

The photos reveal that Gram-negative bacteria, which have a protective outer membrane, aren’t uniformly impenetrable — they actually have stronger and weaker spots on their surfaces.

In these bacteria, the outer membrane is composed of dense networks of protein building blocks.

In between, though, are protein-free ‘patches’ of sugary chains known as glycolipids.

The tough outer membrane of Gram-negative bacteria prevents antibiotics from penetrating the cell wall, making antimicrobial resistance of bacteria like Salmonella and E. coli such a danger.

Knowing there are ‘small gaps for patches that contain no protein,’ suggests there may be vulnerable points that can be targeted by antibiotics, co-author Bart Hoogenboom, a biophysicist at University College London, said in a statement.

The study, published today in Proceedings of the National Academy of Sciences was conducted by Hoogenboom’s team at UCL, along with researchers at the National Physical Laboratory, King’s College London, University of Oxford and Princeton University.

‘The outer membrane is a formidable barrier against antibiotics and is an important factor in making infectious bacteria resistant to medical treatment,’ Hoogenboom added.

‘However, it remains relatively unclear how this barrier is put together, which is why we chose to study it in such detail.’

Researcher Georgina Benn imaged the entire surface of an E. coli bacterium at a resolution of less than five nanometers, or about 1/10,000 of the thickness of a human hair.

The process, known as atomic force microscopy, enabled her to visualize molecular structures on the surface of the organism.

Benn managed to image the entire surface of an E. coli bacterium, ‘at a staggeringly high resolution of less than five nanometers,’ according to ZME Science, about 1/10,000 of the thickness of a human hair.

‘There is not one key breakthrough that allowed us to take this image; instead it resulted from the optimization of a whole range of things that went into this,’ Hoogenboom told ZME Science. 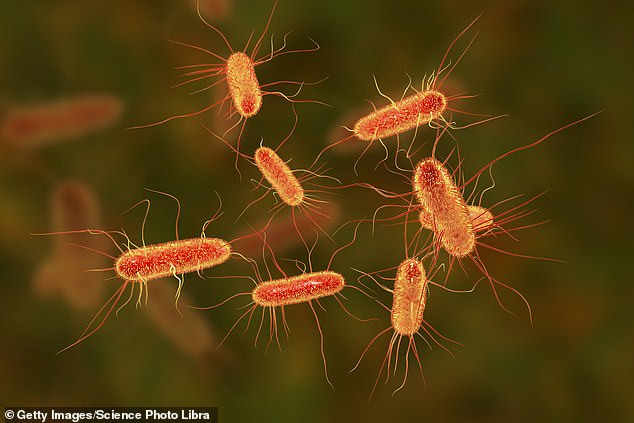 The tough outer membrane of Gram-negative bacteria like E. Coli (pictured) prevents antibiotics from penetrating their cell walls. But the new images suggest their are ‘chinks in the armor of the bacteria,’ the researchers said

‘I like to compare this with cooking,’ he added. ‘An exquisite dish depends on a judicious choice and appropriate balance of several high-quality ingredients, rather than on just having added extra salt or pepper. And while I am of course biased, I think these images definitely deserve a Michelin star!’

The team already knew the outer membrane was dense, but the resulting images revealed its crammed with microscopic holes formed by proteins.

These holes allow nutrients in while keeping toxins out, the researchers said. 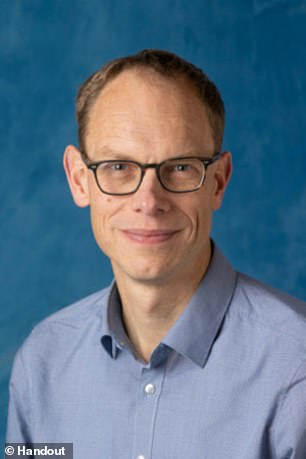 Bart Hoogenboom, a professor of biophysics at UCL, led the team that photographed the E. Coli bacteria

‘The textbook picture of the bacterial outer membrane shows proteins distributed over the membrane in a disordered manner, well-mixed with other building blocks of the membrane,’ said Benn in the release.

These photos disprove that, she added, showing that the lipid patches are separated from the protein networks, ‘just like oil separating from water, in some cases forming chinks in the armor of the bacteria.’

Benn said the results mean scientists can ‘start exploring if and how such order matters for membrane function, integrity and resistance to antibiotics.’

According to the CDC, at least 2.8 million people get an antibiotic-resistant infection in the U.S. alone, and more than 35,000 people die from one.

The more antibiotics are used to treat bacterial infections, the less effective they become.

The breathtaking photos may also explain how bacteria can have such a dense protective layer while still growing rapidly. (Under optimal conditions, E. coli doubles in size and divides every 20 minutes.)

The protein-free patches could allow for more give, making it easier for the membrane to grow.