The world is in the midst of a global data storage crisis.

The datasphere is set to increase by 300 percent in 2025 and there is not enough space in ‘the cloud’ to hold the ‘mind-blowing amount.’

The stark warning comes from scientists at Aston University, who are scrambling to develop a plan that does not involve building more servers that currently use up 1.5 percent of the world’s electricity yearly.

To tackle this problem, the team is developing new technology to provide surfaces with channels less than five nanometers in width, around 10,000 times smaller than the width of a human hair.

Dr Matt Derry, who is leading the project, said in a statement: ‘Simply building new data centers without improving data storage technologies is not a viable solution.

‘Increasingly we face the risk of a so-called data storage crunch and improved data storage solutions are imperative to keep up with the demands of the modern world.’

The world is living a digital lifestyle that produces troves of data.

According to a report  from the International Data Corporation (IDC), ‘the consequence of this increasing reliance on data will be a never-ending expansion in the size of the Global Datasphere.’

The report shows the estimated zettabytes (ZB), a measure of digital storage capacity, in 2019 was just 45ZB, but by 2025 that is set to increase to 175ZB.

One zettabyte is equivalent to a trillion gigabytes.

‘If you were able to store the entire Global Datasphere on DVDs, then you would have a stack of single layer Blu-ray discs that could get you to the moon 23 times or circle Earth 222 times,’ IDC shared in the report.

The dramatic increase is imminent, and Derry and his team hope to find a solution before time runs out.

Dr Amit Kumar Sarkar, who recently joined the Aston University team, said: ‘We will be exploiting advanced polymer chemistry as a pathway to increase the amount of data that can be housed on storage media.

‘The next three years will be crucial.’

In 2010, IDC showed that only 2ZB of data was created and replicated worldwide, but this was just three years after Apple released its first iPhone and just one year after Samsung’s hit the market.

These two devices likely kickstarted the speed of data growth that we see today.

Data shows an incredible jump between 2019 and 2020, from 41ZB to 64.2ZB, due to people working from personal devices amid lockdowns that shuttered offices.

IDC also predicts that 80 percent of global data will be unstructured by 2025. 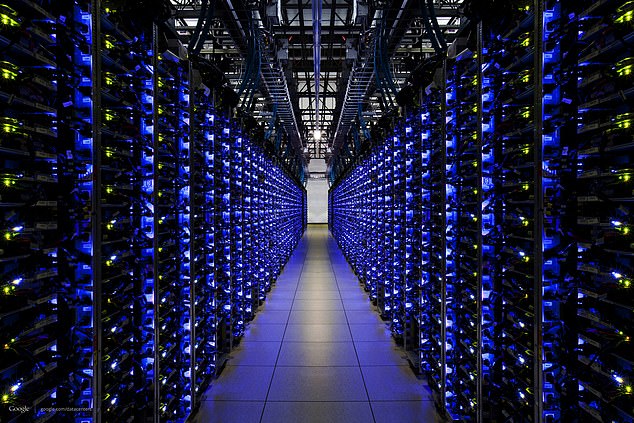 This is because how and where we consume data has changed and will continue to change, Redgate reports.

IDC breaks this down into three categories: Endpoints, Edge and Core.

At the Endpoints are devices outside the networks, such as smartphones, sensors, and wearable devices, and the Edge comprises servers in offices and datacenters.

And in the Core are enterprise and cloud provider datacenters where most processing and analytics are performed.

IDC predicts data collected at the Edge through various IoT and sensing devices will increase by 33 percent annually and makeup 22 percent of the total global datasphere by 2025.

Scientists store data inside DNA that could last MILLIONS of years

Also, the breakthrough that could mean your phone will never run out of space again: Microsoft sets DNA strand storage record