Scientists at war with ministers over Covid: Experts call for public inquiry into ‘failures’

Nearly 30 leading experts have demanded Boris Johnson launches a public inquiry to prepare Britain for a second wave of coronavirus, in another sign of a growing gulf between ministers and scientists.

The group of 27 said a second epidemic was ‘probable’ this winter and warned it would be more deadly than the first if the Government doesn’t address its failures from the previous outbreak.

They have laid out a series of glaring shortcomings which they say have contributed to the UK suffering more than 40,000 Covid-19 deaths, the highest in Europe.

They also ripped into ministers for their ‘inability to plan for necessary goods’ such personal protective equipment (PPE) for NHS and care home workers.

Among the signatories are ex SAGE scientist, Professor Deenan Pillay, a virologist at University College London, and Professor Anthony Costello, a former World Health Organization (WHO) director and a global health expert at UCL.

The editors of two prestigious medical journals have also put their name to the letter – Richard Horton of the Lancet and Fiona Godlee of the British Medical Journal.

It is the latest sign of brewing tensions between ministers and the country’s top scientists.

And last night Health Secretary took Downing Street’s daily press conference without any of Number 10’s scientific advisers for the first time – in another sign of the strained relationship. 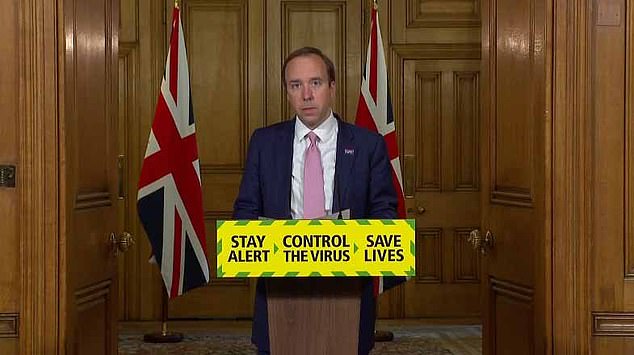 In the new letter – published in the Guardian– the 27 experts said it ‘seem probable’ there will be a second wave in winter.

They continued: ‘Many more will die unless we find quick, practical solutions to some of the structural problems that have made implementing an effective response so difficult.

‘These include the fragmentation, in England, of the NHS, public health and social care; the failure of those in Westminster to engage with local government and devolved nations; the channels by which scientific evidence feeds into policy; and an inability to plan for necessary goods and services, and procure them.’

The signatories include leading professors in virology, public health and epidemiology (the study of diseases in different groups of people) at the country’s best universities.

The letter was published in the Guardian today.

Despite strenuous efforts by health professionals and scientists inside and outside government, the UK has experienced one of the highest death rates from Covid-19 in the world, with the poor and certain minority ethnic groups affected especially badly.

If, as seems probable, there is a second wave this winter, many more will die unless we find quick, practical solutions to some of the structural problems that have made implementing an effective response so difficult. These include the fragmentation, in England, of the NHS, public health and social care; the failure of those in Westminster to engage with local government and devolved nations; the channels by which scientific evidence feeds into policy; and an inability to plan for necessary goods and services, and procure them.

We call on all political parties to commit to a rapid, transparent, expert inquiry to address these issues. This must avoid diverting the efforts of those responding to the crisis or apportioning blame, but should propose feasible ways to overcome the obstacles faced by those on the frontline of the response and help them to save lives.

They said the death rate in the UK has been high despite ‘strenuous efforts by health professionals and scientists inside and outside government … with the poor and certain minority ethnic groups affected especially badly’.

Office for National Statistics reports have shown the poorest in society are twice as likely to die from Covid-19 as the richest.

And Black, Asian and Minority Ethic (BAME) groups are also disproportionately affected by the disease.

The UK Government has not yet committed to a public inquiry into the pandemic in Britain, but Cabinet ministers have admitted there will be ‘lessons to be learned’ when it’s over.

But the experts in today’s letter make it clear an investigation is needed immediately because the virus is threatening to spiral back out of control already, just a week after lockdown was eased slightly.

Estimates by Public Health England and Cambridge University suggest the R-rate – the average number of people each Covid-19 patient infects – is above the danger level of one in the North West and South West of England. It must stay below one or Britain will face another crisis.

The PHE/Cambridge team – whose model is based on death data from NHS England and regional health officials, antibody surveillance sampling and mobility reports – calculated that the crucial ‘R’ reproduction rate fell to just 0.4 in the capital in the aftermath of the lockdown being introduced.

However, the rate in London – as well as other regions – slowly began to creep up to between 0.7-0.8 before moving closer to one in the past few weeks.

At the beginning of the outbreak London was the worst affected region but the latest numbers suggest it is now ahead of all but one region in terms of recovery.

The data, published by the university, shows London is recording 1,310 cases each day – behind only the South West (778).

In contrast, the North West of England is recording 4,100 daily infections and has an R rate of 1.01, the highest for any region in the country.

The South West also has an estimated R rate of 1. While the North East and Yorkshire is the only area to still be in the 0.8s.

It comes after four Sage experts warned that relaxing lockdown restrictions at this time risked the R spiralling out of control and causing a second epidemic.

Professor John Edmunds, from the London School of Hygiene and Tropical Medicine and a member of Sage, said he would have preferred to see the R brought down much lower before opening back up.

Sir Jeremy Farrar, director of the Wellcome Trust and a member of Sage, said on Twitter that Covid-19 is ‘spreading too fast to lift lockdown in England’ and NHS test and trace ‘has to be fully working and infection rates have to be lower’.

Professor Peter Horby, from Oxford University, who sits on Sage and chairs its NERVTAG subcommittee, agreed, saying the R number was still close to one.

He told the BBC last week: ‘What I would say is that returning to a situation where we lost control again is far worse than another week or two of social measures,’ he said.

A fourth Sage member, Professor Calum Semple, said a ‘brave’ political decision had been made, which did not align with the science.

He told the BBC: ‘Essentially we’re lifting the lid on a boiling pan and it’s just going to bubble over,’ he said. ‘We need to get it down to simmer before we take the lift off, and it’s too early.’

Fears of a second wave of coronavirus were raised yesterday when Iran has become the first country in the world to report a second epidemic. 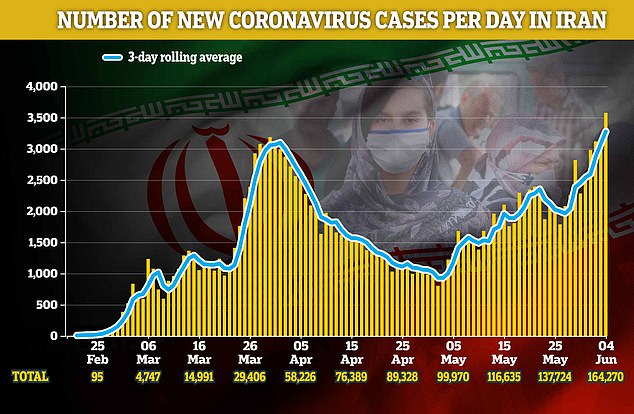 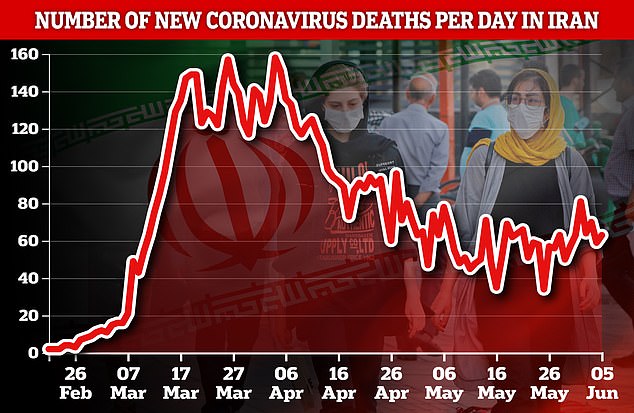 Officials have put the ‘second wave’ down to increased testing, and point to the fact that deaths have not followed suit (pictured) as evidence. Deaths often lag behind cases, because of the time it takes an infected person to get sick enough to die

The Middle Eastern nation logged a record 3,574 cases of the virus on Wednesday, beating its previous worst day of 3,186 cases logged on March 30.

Iran began easing its lockdown restrictions – which were imposed in February as the virus ran rampant – in mid-April as the disease declined.

Cases began picking up again in early May and have now been above 3,000 for three days running, even as gyms and public offices were reopened at the weekend.

WHO ARE THE 27 EXPERTS THAT SIGNED THE LETTER?