Lab grown pork sausages could soon be on the menu: Scientists create bangers originating from muscle cells taken from pigs – and burgers could be next

Slaughter-free, lab-grown sausages could be available to Brits from next year after scientists developed a new way of growing meat.

Technology pioneered by Oxford University is being used to harvest muscle and fat cells from pigs to be turned into pork sausages.

Cells are taken from an anaesthetised pig and grown in water tanks known as bioreactors, where they are fed nutrients before being harvested.

The technique was originally developed to grow human tissue for medical purposes but has been adapted by the university’s spin out company Ivy Farm.

Slaughter-free, lab-grown sausages could be available to Brits from next year after University of Oxford scientists developed a new way of growing meat. Pictured: A hot dog made with the university’s spin out company Ivy Farm’s sausages 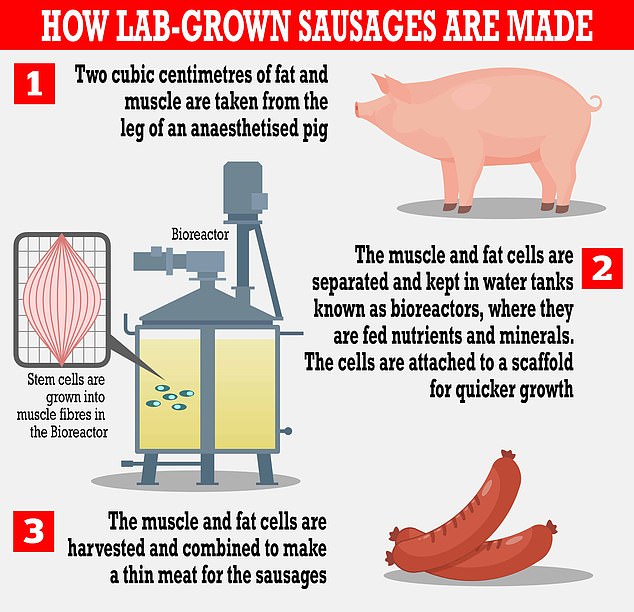 Dr Russ Tucker, 36, co-founder of Ivy, came from a family of butchers and told The Times his parents were not pleased when he suggested they eat a vegetarian meal once a week.

He said: ‘I was lucky not to be kicked out of the house.’

Dr Tucker, nicknamed the ‘hog father’, added he wanted to follow his father and grandfather into the meat trade, ‘albeit with a culture dish and not a cleaver’.

The technique for growing meat in a lab was developed by Oxford University’s Institute of Biomedical Engineering.

How are lab-grown sausages made?

The lab-grown sausages are made in three steps:

Scientists take two cubic centimetres of fat and muscles cells and place them in a water-based gel within the bioreactors, where they are stored at 98.6F (37C).

The cells multiply into more than 1billion in number within two to three weeks — producing around 2.2lb (1kg) of meat.

Cells are attached to a scaffold while in the bioreactors to help them grow more quickly.

The process multiplies the cells without the need for genetic modification.

Ivy Farm says it hopes the technology can be used to fight climate change and reduce the reliance on traditional farming for meat.

The company aims to fight the damaging aspects of meat-eating without forcing people to change their diets.

Its process also avoids the need for high levels of antibiotics in livestock, which contribute towards rising antibiotic resistance in humans.

While in development at Oxford University, the project was nicknamed Churchill because the former Prime Minister predicted the advent of lab-grown meat 90 years ago.

Writing in 1931, he said: ‘We shall escape the absurdity of growing a whole chicken in order to eat the breast or wing, by growing these parts separately under a suitable medium.’

Ivy Farm is seeking £16million in funding to build a research and development facility next year.

It intends to open up a lab open to the public next year, where people can try its sausages and other meat, including beef burgers and meatballs.

The company has begun discussions with the Food Standards Agency and intends to bring out its sausages in 2025, when they will be sold for a slightly higher price than premium butcher’s sausages.

Chief executive of the British Meat Processors Association Nick Allen said: ‘It could be the future but we need to make sure it’s not rushed to market without understanding hidden consequences.

‘You start with one little culture of meat and then grow it exponentially and you have to be certain that the initial sample was spot on.’