For those who resolve every new year to get in shape, it could spare the expense of a pricey gym membership.

Scientists have discovered a tiny skin patch that can reduce body fat by almost a third.

The breakthrough raises hopes of a treatment that could help people lose weight without exercising or resorting to gastric surgery.

The patch, which delivers the drugs straight to the white fat layer under the skin, is estimated by the researchers to cost just £2.60 to make.

So far it has been tested only on mice, but the researchers in Singapore say they have interest from biotechnology companies, which could soon lead to human trials.

Xu Chenjie, an assistant professor from Nanyang Technological University, said: ‘With the embedded microneedles in the skin of the mice, the surrounding fats started browning in five days, which helped to increase the energy expenditure, leading to a reduction in body fat gain.

‘The amount of drugs we used in the patch is much less than those used in oral medication or an injected dose.

‘This lowers the drug ingredient costs while our slow-release design minimises its side effects.’ 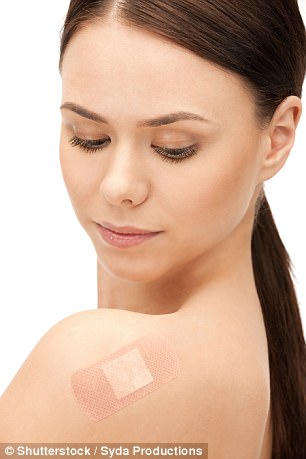 Brown fats are found in babies and help to keep them warm by burning energy. But as humans grow older, they have less ‘good’ brown fat, which is replaced by energy-storing white fat.

When the patch is pressed into the skin for about two minutes, these micro-needles become embedded and it can then be removed.

Co-author Professor Chen Peng said: ‘What we aim to develop is a painless patch that everyone could use easily, is unobtrusive and yet affordable.

‘Most importantly, our solution aims to use a person’s own body fats to burn more energy, which is a natural process in babies.’

The patch reduced weight gain in mice on a high-fat diet and cut their fat mass by more than 30 per cent over four weeks.

Those given the drug had significantly lower blood cholesterol than untreated mice. Beta-3 adrenergic receptor agonist is a drug used to treat overactive bladders, while T3 triiodothyronine is a thyroid hormone commonly used for an under-active thyroid gland.

Both have been shown in other studies to turn white fats brown, but their use was hampered by potentially serious side effects and accumulation in non-targeted tissues if swallowed as a pill or taken conventionally.