Genetically-edited chickens that are immune to bird flu could be a reality within a decade, scientists believe.

The breakthrough could spell an end to supermarket shortages of eggs and poultry that are caused by avian influenza.

Britain is currently being ravaged by its biggest ever bird flu outbreak, with health chiefs culling nearly 4million birds in a year and ordering the lockdown of all kept birds in a bid to stall the spread.

As well as emptying shop shelves of eggs, the spike in cases has sparked fears of a turkey shortfall this Christmas.

Chickens could be genetically edited with a decade to stop them from catching bird flu and threatening supplies of eggs and poultry, scientists say 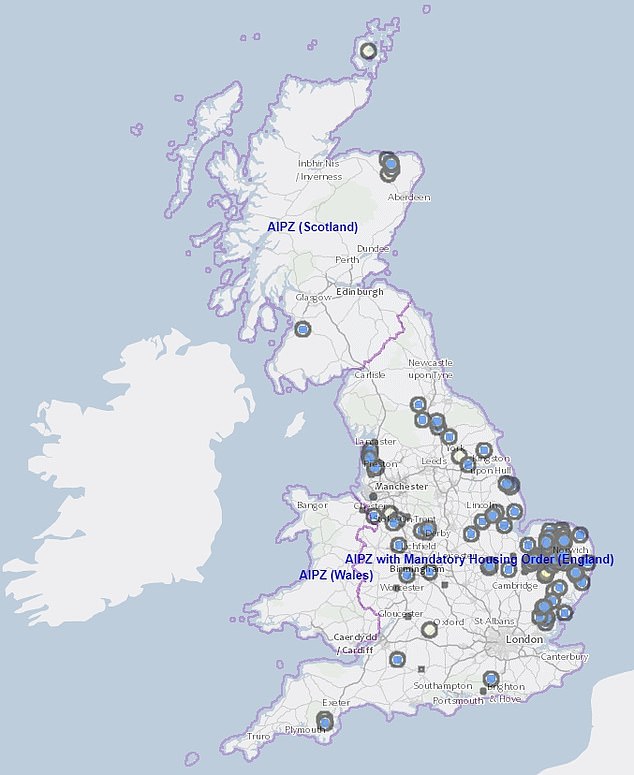 The UK is in the grips of an avian flu crisis, with nearly 4million birds killed, supermarket shelves empty of eggs and Christmas turkey shortages expected. Pictured: Map showing a prevention zone (red), the area where mandatory housing is already in place (purple) and the areas under a 10km surveillance zone (grey) 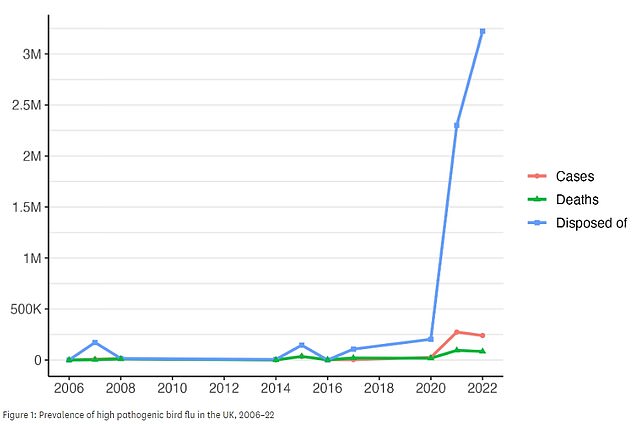 A record number of bird flu cases were confirmed across England, Scotland and Wales last winter. The graph shows the prevalence of bird flu in the UK from 2006 to 2022, including cases (red line), deaths among the animal due to the virus (green) and the number that have been culled over concerns about bird flu (blue)

Bird flu outbreak: Everything you need to know

Bird flu is an infectious type of influenza that spreads among birds.

In rare cases, it can be transmitted to humans through close contact with a dead or alive infected bird.

This includes touching infected birds, their droppings or bedding. People can also catch bird flu if they kill or prepare infected poultry for eating.

As they cluster together to breed, the virus spreads rapidly and is then carried to other parts of the globe.

New strains tend to appear first in Asia, from where more than 60 species of shore birds, waders and waterfowl, including plovers, godwits and ducks, head off to Alaska to breed and mix with various migratory birds from the Americas. Others go west and infect European species.

What strain is currently spreading?

So far the new virus has been killed 97million birds and poultry globally and 3.8million in the UK since September 2021.

The unprecedented level of deaths had led some experts to say this is the deadliest variant so far.

Can it infect people?

The risk to people has been deemed ‘very low’.

But people are strongly urged not to touch sick or dead birds because the virus is lethal, killing 53 per cent of people it does manage to infect.

The new technique, developed three years ago, removes a section of the birds’ DNA that the virus uses to replicate.

Successful tests were carried out in chicken cells.

Dr Mike McGrew, a senior lecturer at the Roslin Institute in Edinburgh, told The Daily Telegraph: ‘We have been working on this project since those first results were published back in 2019 and we have results.

‘These are described in a scientific paper that is currently under review in a journal.

‘Breeding a chicken completely resistant to infection by avian influenza viruses is a scientific challenge and the research into the efficacy of any genetic resistance must be carefully developed.’

He added: ‘If a resistant chicken were developed it would take five to 10 years before the genetic change was introduced into production flocks of chickens.’

The genome-editing method, which uses technology called Crispr, is akin to using a pair of molecular scissors to cut DNA at specific points to delete or replace them with alternate sequences.

Gene-edited foods are not currently sold in Britain as they were not permitted under EU rules, despite being available in countries such as the US, Canada and Brazil.

But that is expected to change in the coming years.

The Genetic Technology (Precision Breeding) Bill, which has just had a second reading in the House of Lords, could pave the way for creating chickens that cannot catch bird flu.

The technique could be used to boost the nutritional content of foods or make them less susceptible to disease.

This could include making lettuce that contains more vitamin C, tomatoes that can lower blood pressure and crops that are resistant to diseases — decreasing the need for pesticides.

Instead, scientists use a specialised protein to make tiny changes to the plant’s DNA that could occur naturally or through selective breeding.

But campaigners still fear the edited foods could disrupt ecosystems and trigger unintended consequences. They also disapprove of plans not to label foods to highlight that they are gene-edited.

Dr McGrew told the newspaper that the Bill would oversee genetic editing to ensure it was done correctly and animal welfare is prioritised.

He said: ‘This will make it possible for the technology to be used in conjunction with established breeding programmes, while ensuring welfare is considered.

‘We expect the process of development of flu resistant chickens to involve many steps and we will engage openly at each step, discussing the data and assessments of risks and benefits.’

It comes amid the unprecedented flu outbreak, with 256 cases in both wild and captive birds — caused by the H5N1 strain — detected since the outbreak began in October 2021.

The situation was triggered by a record number of bird flu cases across England, Scotland and Wales last winter. 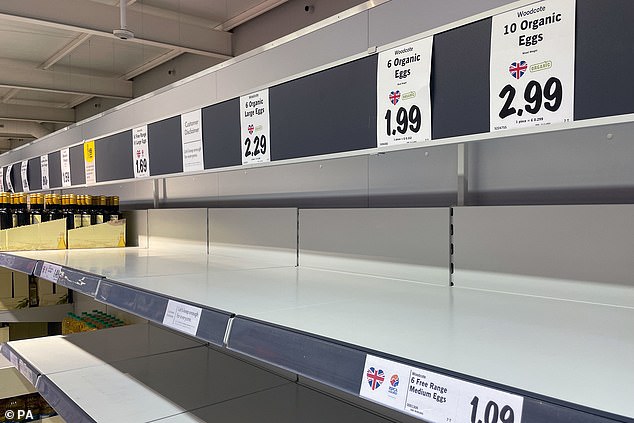 Some supermarkets have run out of eggs, while others have rationed supply due to the knock-on effects of bird flu. Pictured: Empty egg shelves in a Lidl store in Loughborough, Leicestershire on November 17 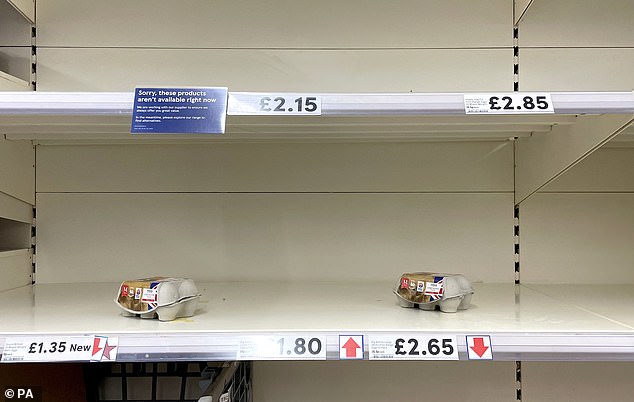 Pictured: Empty egg shelves in a Tesco store in Ashford, Kent on November 22 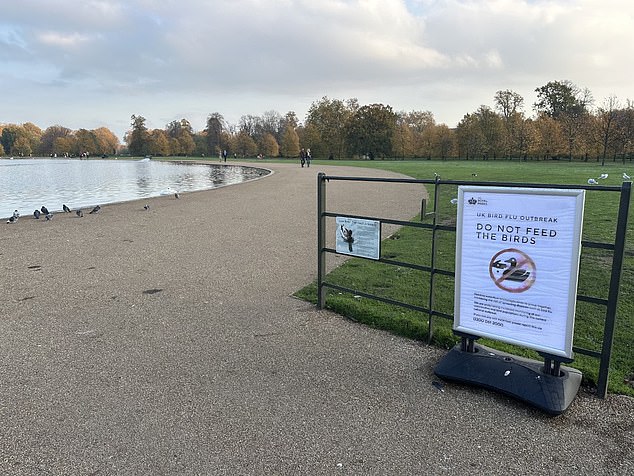 Despite levels usually falling in the summer, they continued to rise.

Scientists think the virus has mutated in a way that makes it tougher — and survive longer in the environment on surfaces or in water — although further research is needed.

Some supermarket branches, including Sainsbury’s and Lidl, have run out of eggs, while others, such as Tesco and Asda, have rationed supply.

Farmers have blamed supply chain disruption due to the outbreak, as well as the inflation crisis forcing some out of the market.

And farmers warned that 3.5million turkeys — nearly a third of the country’s production — had already been culled by the start of the month, threatening the supply of Christmas dinner.

In response to the bird flu outbreak, the Department of Environment, Food and Rural Affairs (Defra) ordered birdkeepers to house their flocks indoors from November 7.

The so-called Avian Influenza Prevention Zone — which applies to pet birds, commercial flocks or a small backyard flock — also means it is a legal requirement to follow strict biosecurity measures to prevent the spread of the virus.

These include restricting access for non-essential people to where birds are kept to minimise the risk of cross-contamination from manure and other products.

Bird owners should also log the movements, deaths and any changes in production among their flock.

Clothing and footwear should be changed before entering enclosures and vehicles should be regularly cleaned and disinfected, Defra said.

If birds show signs of going off their food or water, or show ‘respiratory or neurological’ signs of infection, owners should contact the Animal and Plant Health Agency or their own private vet, who would then alert the authorities.

In rare cases, bird flu can infect humans if they touch infected birds, their droppings or bedding. Its symptoms include a fever, aching muscles and headache. The currently circulating strain is thought to kill 53 per cent of those it infects.