Scientists release most detailed star chart of the Milky Way

The most detailed star chart ever created for the Milky Way and its neighbouring galaxies has been released by the European Space Agency.

Data made public today includes high-precision measurements of almost 1.7 billion stars collected by the space agency’s Gaia probe, which was launched in 2013.

It follows the release two years ago of a smaller batch of measurements covering two million stars.

Early analysis has already revealed finer details about the make-up of the Milky Way’s stellar population and about how stars move, essential information for investigating the formation and evolution of our home galaxy.

The most detailed star chart ever created for the Milky Way and its neighbouring galaxies has been released by the European Space Agency. Data made public today includes high-precision measurements of almost 1.7 billion stars collected by the space agency’s Gaia probe, which was launched in 2013. This image shows the total brightness and colour of stars surveyed

The European Space Agency, based in Paris, says professional and amateur astronomers alike will be able to access the data and hunt for new discoveries in our galaxy and beyond.

Unlike Nasa’s Hubble telescope, which takes images of the sky, Gaia measures the distance, motion, brightness and colour of stars.

This data was then processed by hundreds of scientists and software engineers to produce maps, including of the asteroids in our solar system and a three-dimensional chart of nearby stars.

Footage of what they found also lets viewers visualise the vast number of celestial objects mapped by the project.

A multitude of discoveries are on the horizon after this much awaited release, ESA says, which was based on 22 months of charting the sky.

The new data includes positions, distance indicators and motions of more than one billion stars, along with high-precision measurements of asteroids within our solar system and stars beyond our own Milky Way.

‘The observations collected by Gaia are redefining the foundations of astronomy,’ said Günther Hasinger, ESA director of science, in a written statement.

‘Gaia is an ambitious mission that relies on a huge human collaboration to make sense of a large volume of highly complex data. It demonstrates the need for long-term projects to guarantee progress in space science and technology and to implement even more daring scientific missions of the coming decades.’

Gaia was launched in December 2013 and started science operations the following year. The first data release, based on just over one year of observations, was published in 2016. It contained distances and motions of two million stars.

The new data release, which covers the period between July 25, 2014, and May 23, 2016, pins down the positions of nearly 1.7 billion stars, and with much greater precision. 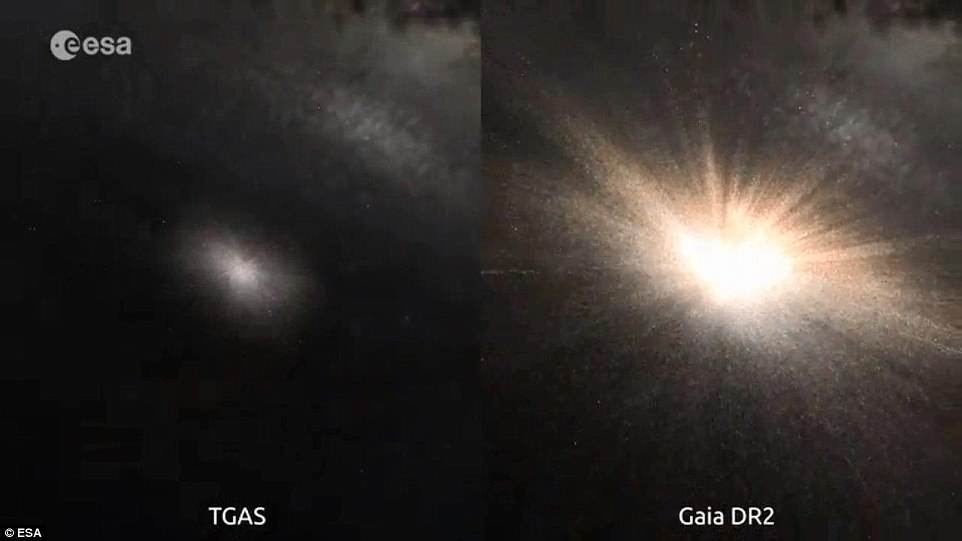 Gaia was launched in December 2013 and started science operations the following year. The first data release, based on just over one year of observations, was published in 2016. It contained distances and motions of two million stars (left). Data release two (right) expands this work 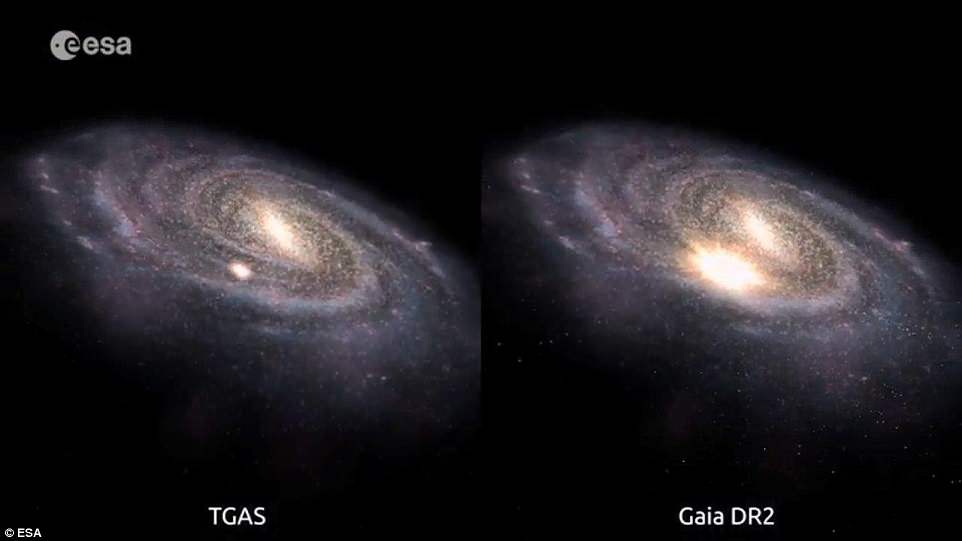 For some of the brightest stars in the survey, the level of precision equates to Earth-bound observers being able to spot a coin lying on the surface of the moon.

With these accurate measurements it is possible to separate the parallax of stars – an apparent shift on the sky caused by Earth’s yearly orbit around the sun – from their true movements through the galaxy.

The new catalogue lists the parallax and velocity across the sky, or proper motion, for more than 1.3 billion stars. From the most accurate parallax measurements, about ten per cent of the total, astronomers can directly estimate distances to individual stars.

‘The second Gaia data release represents a huge leap forward with respect to ESA’s Hipparcos satellite, Gaia’s predecessor and the first space mission for astrometry, which surveyed some 118,000 stars almost thirty years ago,’ says Anthony Brown of Leiden University in the Netherlands.

WHAT IS THE EUROPEAN SPACE AGENCY’S GAIA PROBE AND WHAT IS DESIGNED TO DO?

Gaia is an ambitious mission to chart a three-dimensional map of our galaxy, the Milky Way, and in the process reveal its composition, formation and evolution.

Gaia has been circling the sun nearly a million miles beyond Earth’s orbit since its launch by the European Space Agency (ESA) in December 2013.

On its journey, the probe has been discreetly snapping pictures of the Milky Way, identifying stars from smaller galaxies long ago swallowed up by our own.

Tens of thousands of previously undetected objects are expected to be discovered by Gaia, including asteroids that may one day threaten Earth, planets circling nearby stars, and exploding supernovas.

Astrophysicists also hope to learn more about the distribution of dark matter, the invisible substance thought to hold the observable universe together.

They also plan to test Albert Einstein’s general theory of relativity by watching how light is deflected by the sun and its planets.

The satellite’s billion-pixel camera, the largest ever in space, is so powerful it would be able to gauge the diameter of a human hair at a distance of 621 miles (1,000 km).

This means nearby stars have been located with unprecedented accuracy.

Gaia maps the position of the Milky Way’s stars in a couple of ways.

It pinpoints the location of the stars but the probe can also plot their movement, by scanning each star about 70 times.

This is what allows scientists to calculate the distance between Earth and each star, which is a crucial measure.

In September 2016, ESA released the first batch of data collected by Gaia, which included information on the brightness and position of over a billion stars.

In April 2018, this was expanded to high-precision measurements of almost 1.7 billion stars.

Dr Brown is the chair of the Gaia data processing and analysis consortium executive, overseeing the large collaboration of about 450 scientists and software engineers entrusted with the task of creating the Gaia catalogue from the satellite data.

‘The sheer number of stars alone, with their positions and motions, would make Gaia’s new catalogue already quite astonishing,’ he added.

‘But there is more. This unique scientific catalogue includes many other data types, with information about the properties of the stars and other celestial objects, making this release truly exceptional.’

The comprehensive dataset provides a wide range of topics of further research for astronomers.

Preliminary analysis has already revealed finer details about the make-up of the Milky Way’s stellar population and about how stars move, essential information for investigating the formation and evolution of our home galaxy. This image shows the interstellar dust that fills the Galaxy 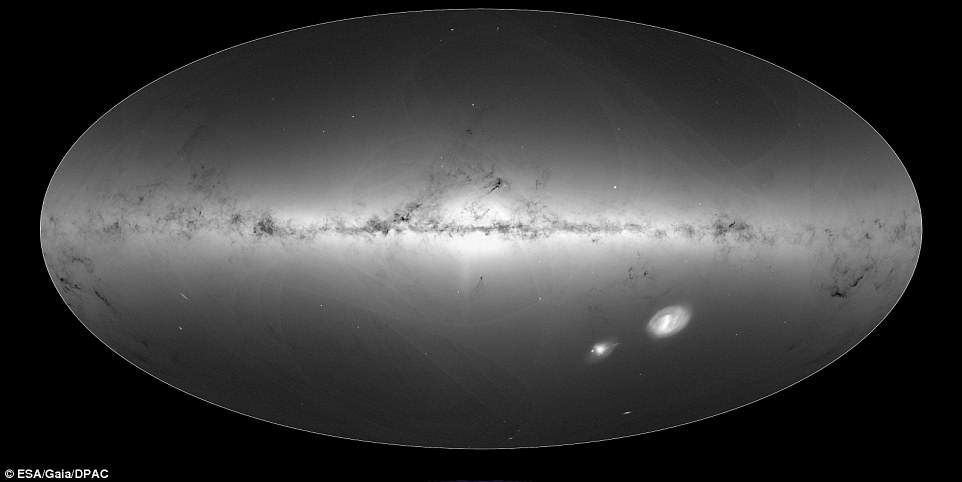 It also contains the velocities along the line of sight of a subset of seven million stars, the surface temperatures of about a hundred million and the effect of interstellar dust on 87 million.

Gaia also observes objects in our solar system. The second data release comprises the positions of more than 14,000 known asteroids, which allows precise determination of their orbits. A much larger asteroid sample will be compiled in Gaia’s future releases. 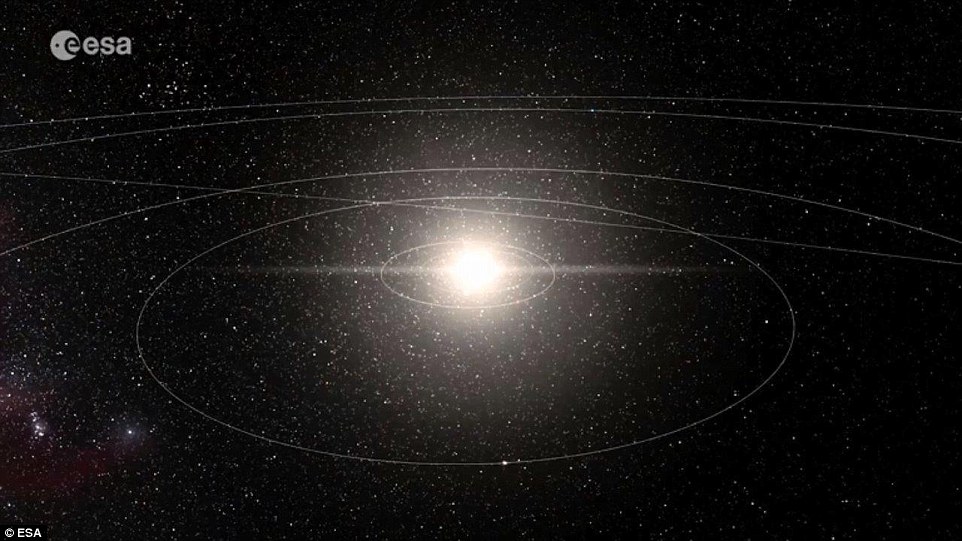 A new animation shows the positions of 14,099 asteroids in our Solar System, as viewed by ESA’s Gaia satellite using information from the mission’s second data release. The orbits of the 200 brightest asteroids are also shown, as determined using Gaia data 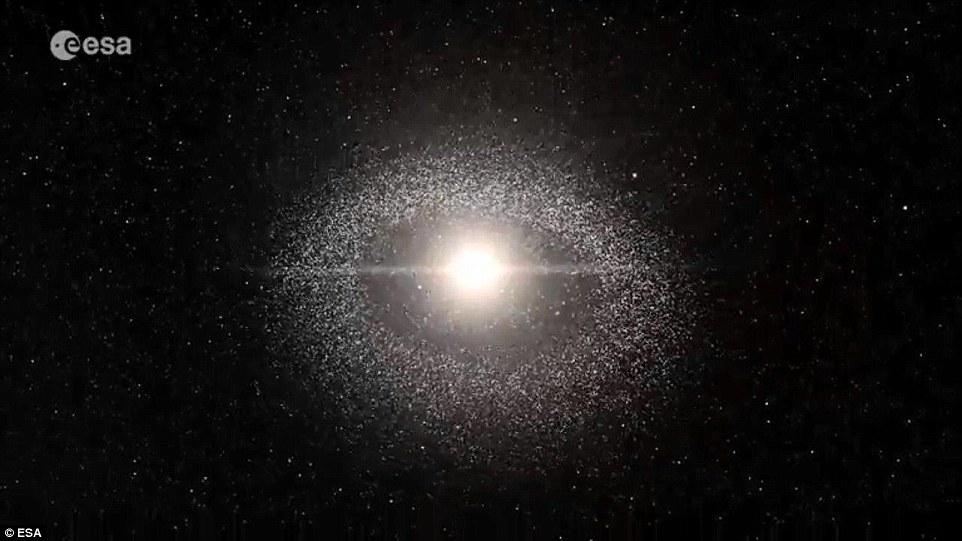 In future data releases, Gaia will also provide asteroid spectra and enable a complete characterisation of the asteroid belt. The combination of dynamical and physical information that is being collected by Gaia provides an unprecedented opportunity to improve our understanding of the origin and the evolution of the solar system, ESA says

Further afield, Gaia closed in on the positions of half a million distant quasars, bright galaxies powered by the activity of the supermassive black holes at their cores.

These sources are used to define a reference frame for the celestial coordinates of all objects in the Gaia catalogue, something that is routinely done in radio waves but now for the first time is also available at optical wavelengths.

Major discoveries are expected to come once scientists start exploring Gaia’s new release. An initial examination performed by the data consortium to validate the quality of the catalogue has already unveiled some promising surprises – including new insights on the evolution of stars. 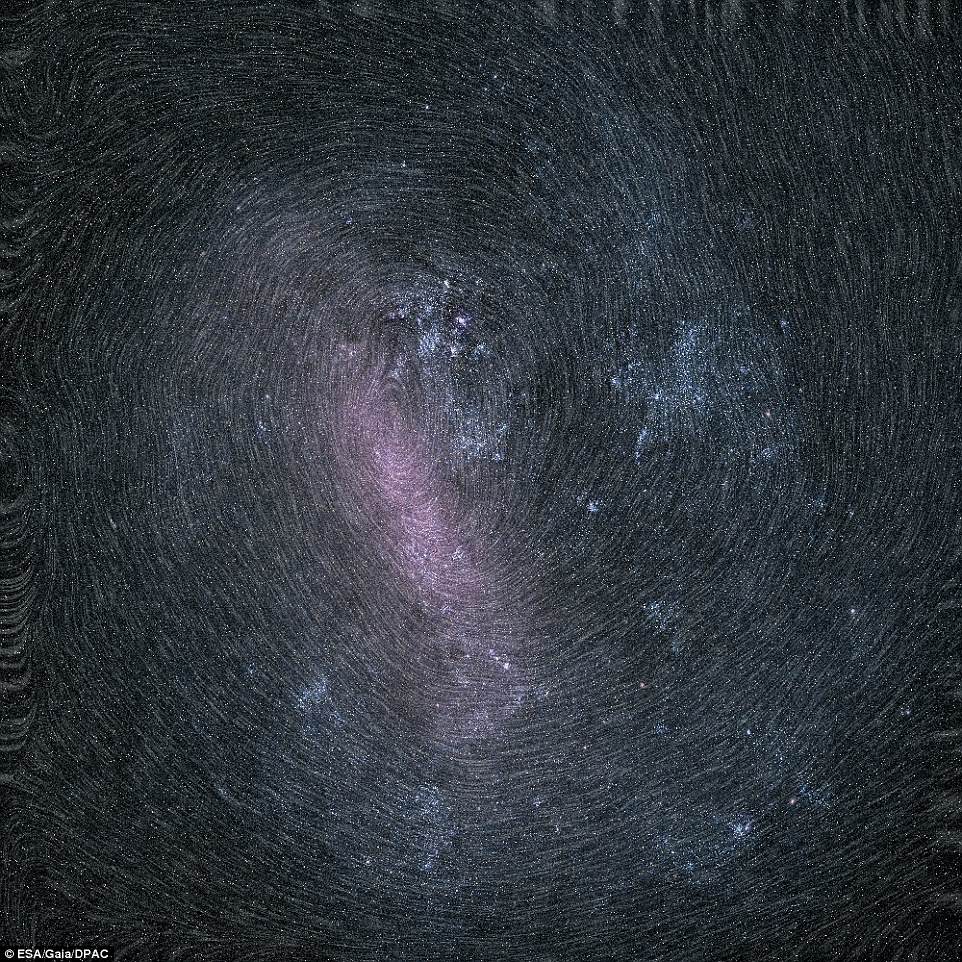 This image combines the total amount of radiation detected by Gaia in each pixel with measurements of the radiation taken through different filters on the spacecraft to generate colour information. Information about the proper motion of stars – their velocity across the sky – is represented as the texture of the image 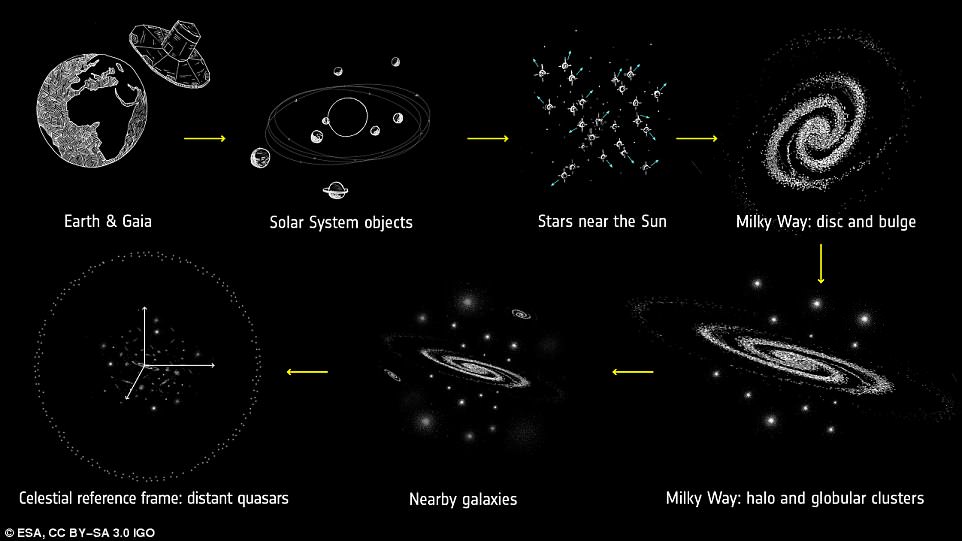 This infographic summarises the cosmic scales covered by Gaia’s comprehensive dataset, which provides a wide range of avenues of investigation for astronomers

The new Gaia data are so powerful that exciting results are just jumping at us,’ says Antonella Vallenari from the Istituto Nazionale di Astrofisica and the astronomical observatory of Padua, Italy, deputy chair of the data processing consortium executive board.

‘For example, we have built the most detailed Hertzsprung-Russell diagram of stars ever made on the full sky and we can already spot some interesting trends. It feels like we are inaugurating a new era of galactic archaeology.’

Named after the two astronomers who devised it in the early twentieth century, the Hertzsprung-Russell diagram compares the intrinsic brightness of stars with their colour and is a fundamental tool to study populations of stars and their evolution.

A new version of this diagram, based on four million stars within five thousand light-years from the sun selected from the Gaia catalogue, reveals many fine details for the first time. 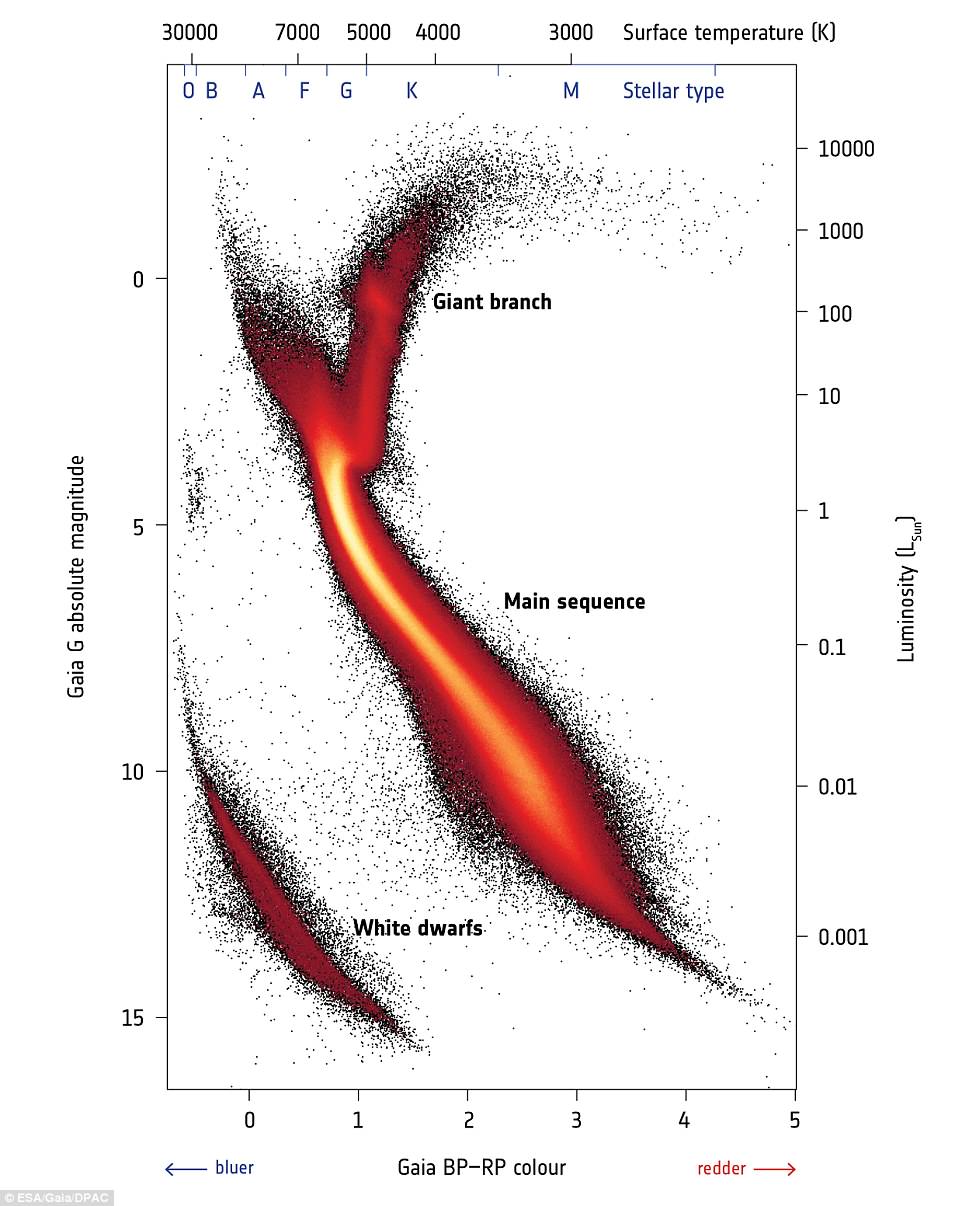 This Hertzsprung-Russell diagram compares the intrinsic brightness of stars with their colour and is a fundamental tool to study populations of stars and their evolution. It was obtained by observing a selection of stars in Gaia’s second release catalogue and is the most detailed to date made by mapping stars over the entire sky

This includes the signature of different types of white dwarfs – the dead remnants of stars like our sun – such that a differentiation can be made between those with hydrogen-rich cores and those dominated by helium.

For a subset of stars within a few thousand light-years of the sun, Gaia has also measured their velocity in all three dimensions, revealing patterns in the motions of stars that are orbiting the galaxy at similar speeds.

Future studies will confirm whether these patterns are linked to perturbations produced by the galactic bar, a denser concentration of stars with an elongated shape at the centre of the galaxy, by the spiral arm architecture of the Milky Way, or by the interaction with smaller galaxies that merged with it billions of years ago.

At Gaia’s precision, it is also possible to see the motions of stars within some globular clusters – ancient systems of stars bound together by gravity and found in the halo of the Milky Way – and within our neighbouring galaxies, the Small and Large Magellanic Clouds.