English charities are given far less lottery cash than their counterparts in Scotland.

Last night a Tory MP demanded an immediate review into how the Big Lottery Fund shares out money generated by ticket sales.

‘It is absolutely outrageous that people who buy their lottery tickets in good faith are seeing their hard-earned money being siphoned north of the border,’ said Nadine Dorries.

‘The Scots already get far more than the English in terms of public spending – so why do they get so much lottery money on top of this? This needs to be looked at urgently. The union is precious but this is too much.’

Fellow Conservative MP Andrew Bridgen said: ‘People will be shocked by this. It would appear that Scotland wins the lottery every year.’

Lottery funding has paid for ‘interactive’ puppet workshops in the Highlands, children’s cookery lessons in Glasgow and a free recording studio for youngsters in Dunfermline.

It also has paid for projects to help gay and transgender people take up sport, to advise parents on how to claim benefits and to build a wind farm on a remote island.

The annual report from the Big Lottery Fund also shows that spending in Wales, at £14.29 a head, and in Northern Ireland at £14.21 per person, is on a par with Scotland.

Separate figures show that over the 13-year life of the fund England has consistently lost out to the three smaller nations of the United Kingdom. 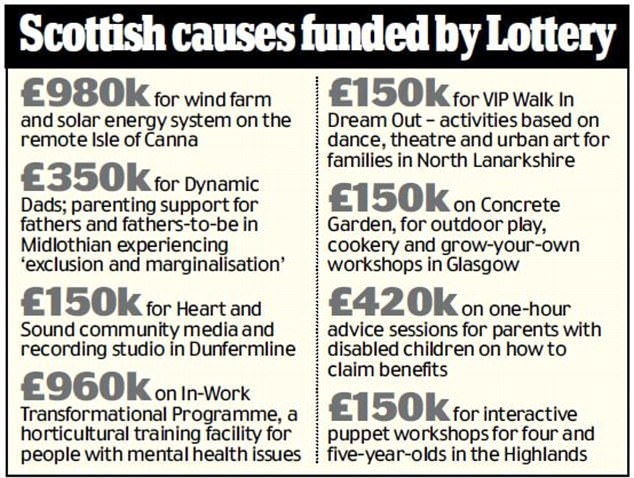 ‘There are plenty of good causes in my constituency.

‘The Scottish already get far more in public money per head of population than the English, so you’d think in that case they’d be getting less lottery money.

‘This is the sort of thing that annoys people in my area who are struggling to get by.’

The Big Lottery Fund is responsible for distributing National Lottery cash to good causes. It makes grants to projects working in health, education and the environment – with most of its money going to charities. 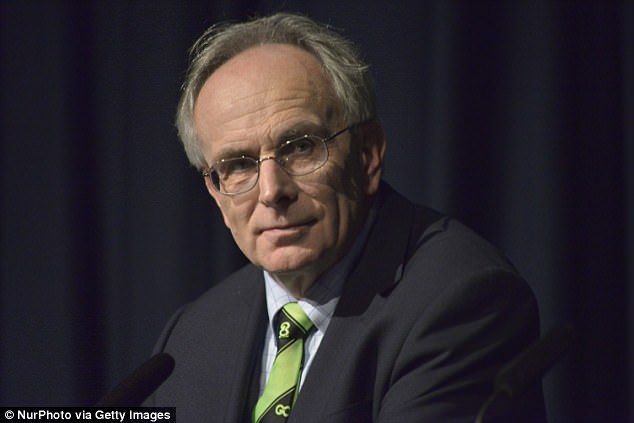 Peter Bone believes allocation of funds from the lottery needs to be fairer, citing good causes in his constituency

An analysis of spending in 2016/17 shows that the highest grant north of the border was to the Scottish Refugee Integration Service, which was given £1.3million.

This was to support 3,000 people whose asylum claims have been accepted and around 150 refugees who need support to submit a claim.

A community wind farm and solar array project on the Isle of Canna was given £980,000.

And £960,000 was given to a project providing a ‘horticultural training facility’ for people with mental health problems.

Smaller grants of £150,000 were also handed out, including to a project in the Highlands to provide ‘interactive puppet workshops’ for four and five-year-olds.

They help children how to recognise potentially dangerous situations, how to summon help and who to tell if they feel unsafe.

The same went towards the Heart and Sound community media and recording studio in Dunfermline, and a project to ‘improve accessibility and participation in sport for people within the LGBTI [lesbian, gay, bisexual, transgender and intersex] community’.

A spokesman for the Big Lottery Fund said: ‘Population is one key factor we take into consideration when determining our funding, but we do so alongside other social and economic factors.

‘We continually review the allocation of our funding to ensure people across the UK can access it, and that it makes the biggest possible difference to people and communities.’

On Scotland, the Big Lottery Fund annual report said: ‘We have funded everything from community gardens and healthy eating projects, to befriending and mentoring projects for disengaged young people, and arts initiatives for people with mental health difficulties.

‘The last 12 months have seen demand flourish for our single stage application (for amounts up to £150,000) with £20million awarded to 143 groups.

‘It is exciting reaching out to communities who have not applied for funding from us before and in the last year.’

The report highlighted its grant to Social Bite, a Scottish coffee and sandwich shop chain, which gives free food to the homeless and ensures that 25 per cent of staff were once without a roof over their heads.

It said: ‘The team have even branched out into the restaurant business with partner venture Home, a concept that follows the Social Bite ethos and was famously visited by actor Leonardo DiCaprio.’

Lottery operator Camelot said it was not possible to produce figures showing how many tickets are bought in the UK’s four nations.

The lottery revelation comes on top of disquiet about the Barnett Formula which favours Scotland to such an extent that patients north of the border have access to better drugs.