They apparently became a couple last week while they were in New York together.

And Scott Disick, 34 and his younger girlfriend Sofia Richie, 19, appear to be ready to show off their new romance in public as they put on an affectionate display in Florida on Thursday.

In pictures obtained by Dailymail.com the duo are seen sharing a sneaky kiss by a hotel pool in Miami as they enjoy some one-on-one time together.

It’s official! Scott Disick and Sofia Richie are seen kissing by a hotel pool in Miami on Thursday 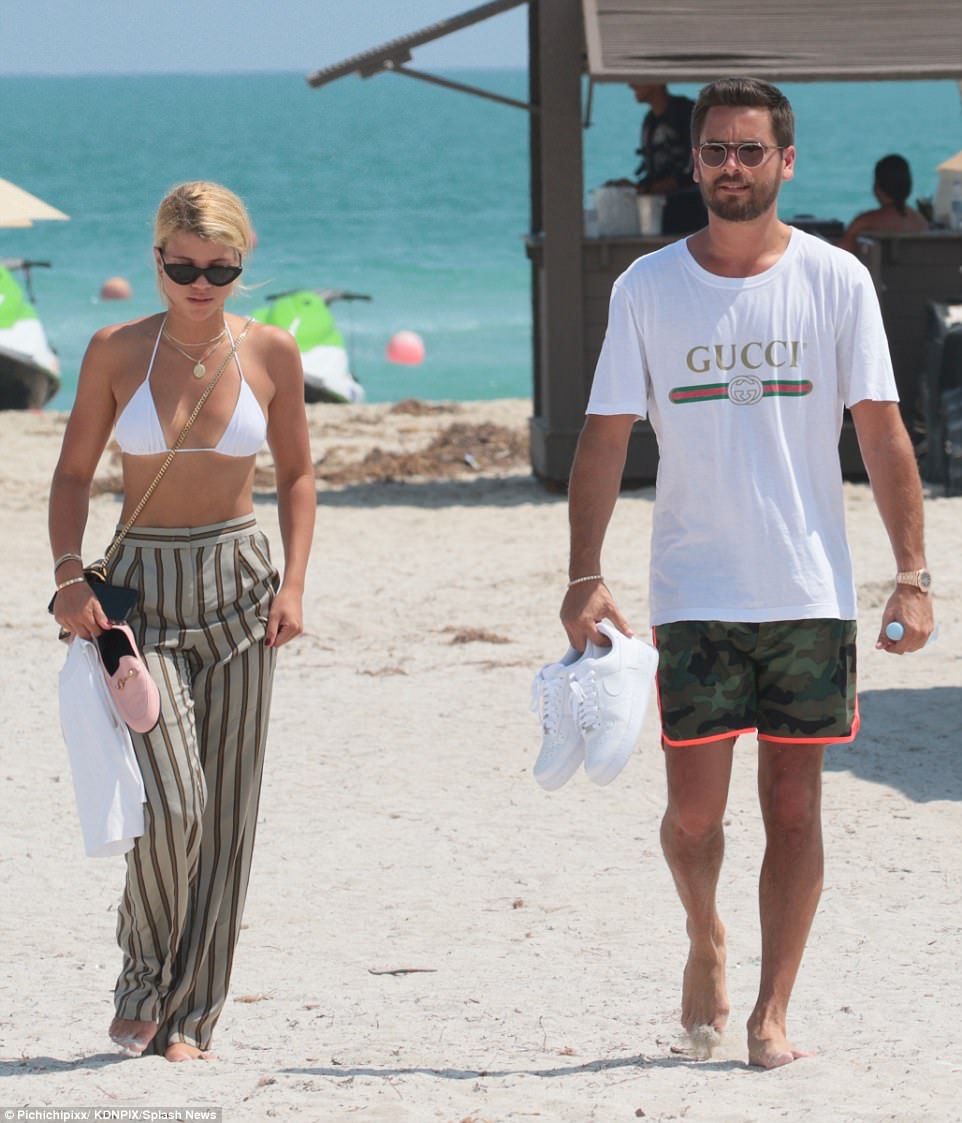 Romantic getaway: The duo strolled the beachfront adjacent to their waterfront hotel together

The duo appeared to look around briefly to check who was watching before Sofia leaned down to give the handsome reality star a smooch.

The daughter of Lionel Richie and Diane Alexander couldn’t stop smiling as she showed off her glowing tan in a skimpy white bikini which she teamed with stylish striped palazzo pants.

Her lightened locks were pulled back into a low ponytail and she protected her eyes with some chic eyewear.

Sofia accessorized with a gold pendant around her neck and a chain strap purse.

Father-of-three Scott kept it casual in a Gucci t-shirt and camouflage shorts.

After a little poolside flirting, the duo strolled the beach in front of their luxurious hotel before grabbing a couple of sun loungers and lazing under the shade of umbrellas. 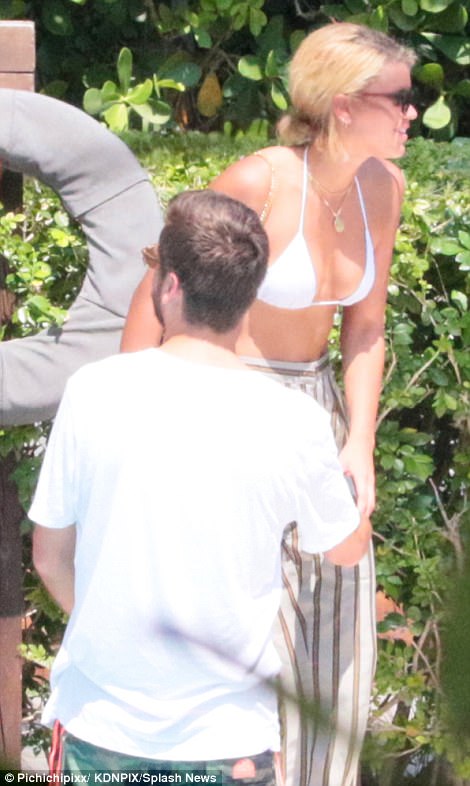 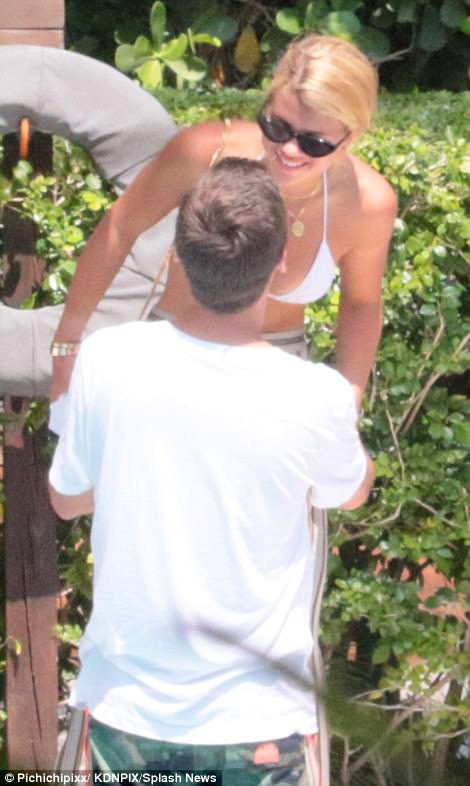 Sneaky kiss: Sofia, 19 and Scott, 34, both appeared to check who was watching before she leaned down to smooch the reality star 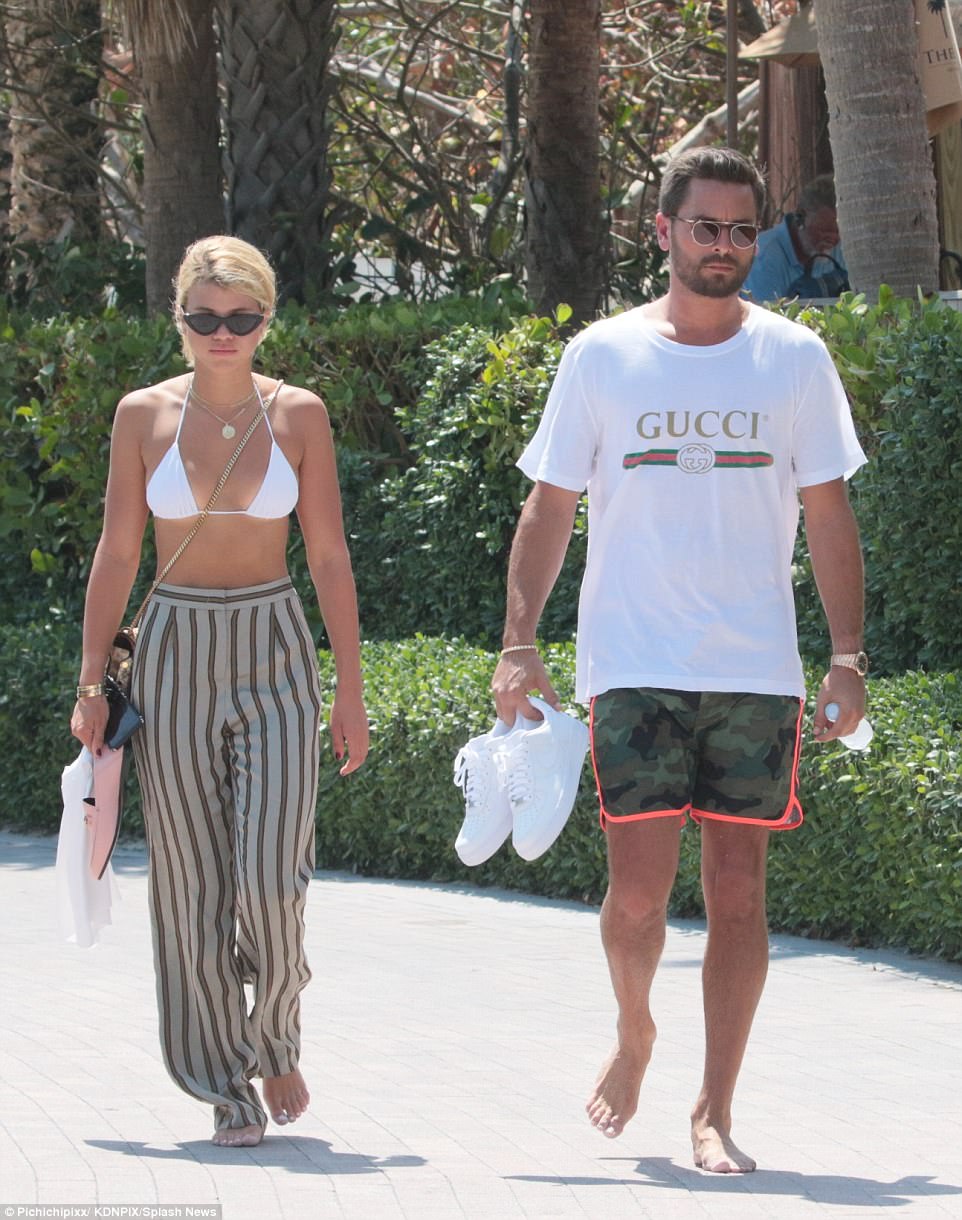 Exploring the area: After a little poolside flirting, the duo strolled the beach in front of their luxurious hotel 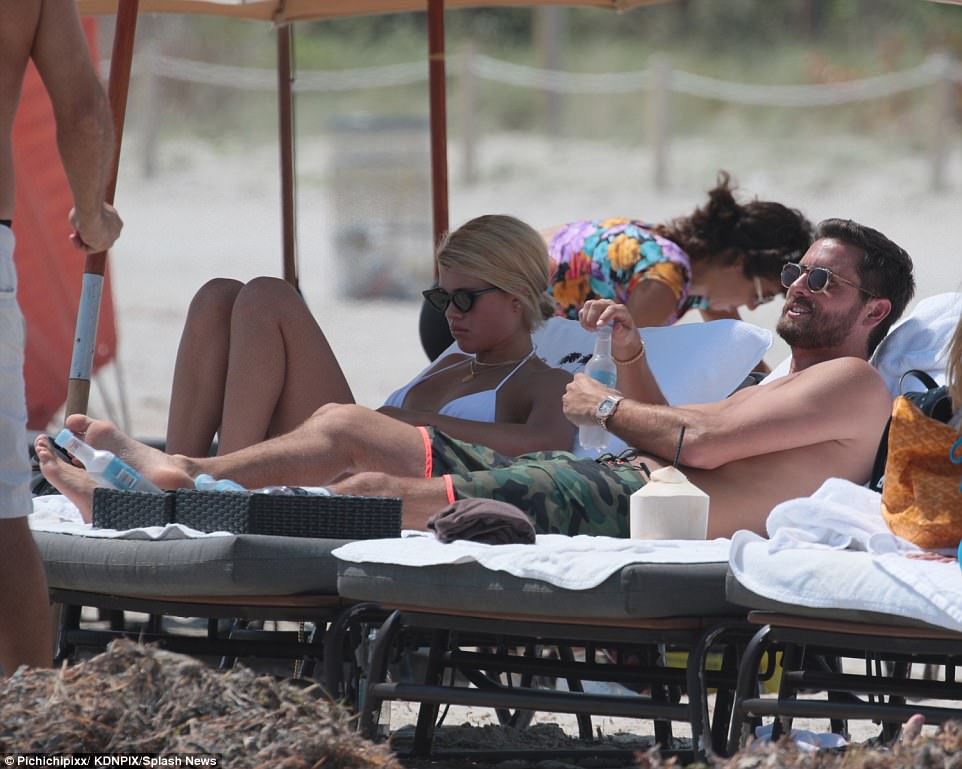 Life’s a beach! The duo then found some beach-side sun loungers as they relaxed together under umbrellas

The trip to Miami comes after weeks of romance rumors between the pair, who recently denied they were anything more than friends.

A source told People on Friday: ‘Scott and Sofia are inseparable. They are spending every day together. Sofia seems smitten,’

‘It’s obvious that she looks up to Scott. She constantly giggles around him,’ said the source. ‘They are very flirty.

‘Scott takes care of her, opens the car door and pays for everything.’ 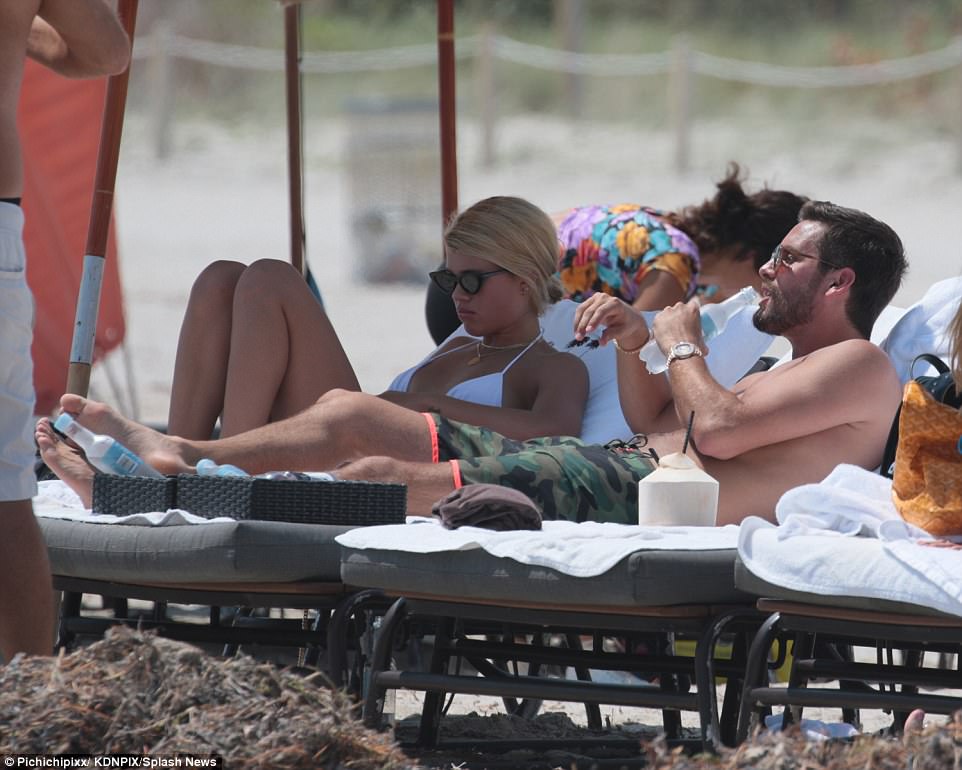 Lazy days: The blonde beauty appeared engrossed in her phone as Scott took advantage of the chilled drinks on offer 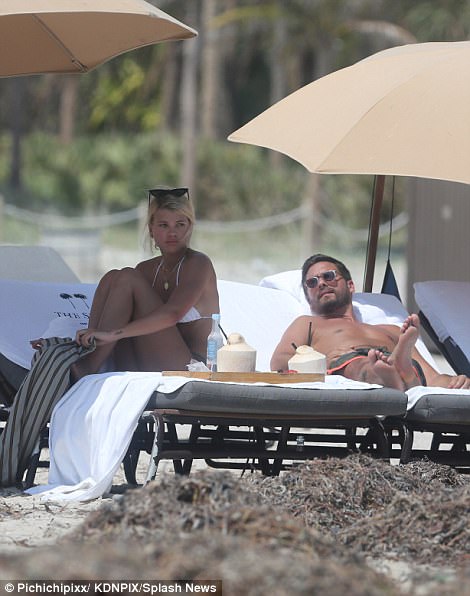 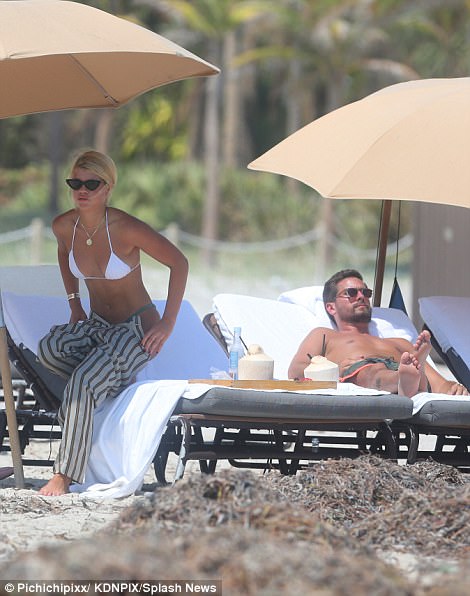 Time to cool off: Sofia was ready to relax and top-up her tan as she whipped off her stylish trousers

Bikini babe: The teen star showed off her glowing tan in the string bikini top and pinned her lightened locks back into a low ponytail

Sofia enjoyed a brief fling with singer Justin Bieber, 23, in the summer of 2016 and coincidentally Scott’s ex Kourtney Kardashian, 38, also enjoyed some dates with the Canadian crooner after they split.

Meanwhile, the blossoming romance has reportedly caused a rift between Sofia and BFF Chloe Bartoli, 27 – who has also dated the KUWTK star.

The duo ‘were like sisters’ until Disick turned his attention to Richie, according to a report by UsWeekly.

‘After Sofia started hooking up with Scott, Chloe stopped speaking to her. It’s a mess,’ a source told Us.

The web between the three was already tangled.

First, Disick’s relationship with the mother of his children Kourtney Kardashian was torpedoed when he was spotted getting grabby with ex Bartoli in France in 2015. 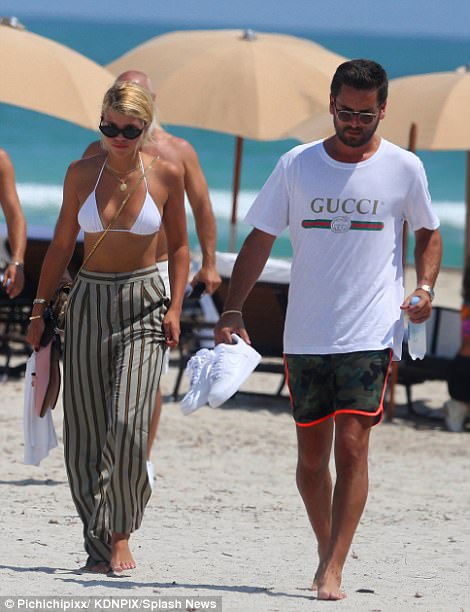 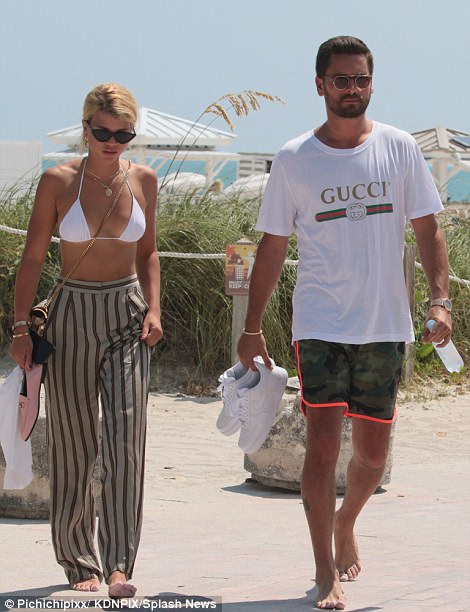 The look good together! The new couple appeared totally at ease in each other’s company as they wandered back to their hotel 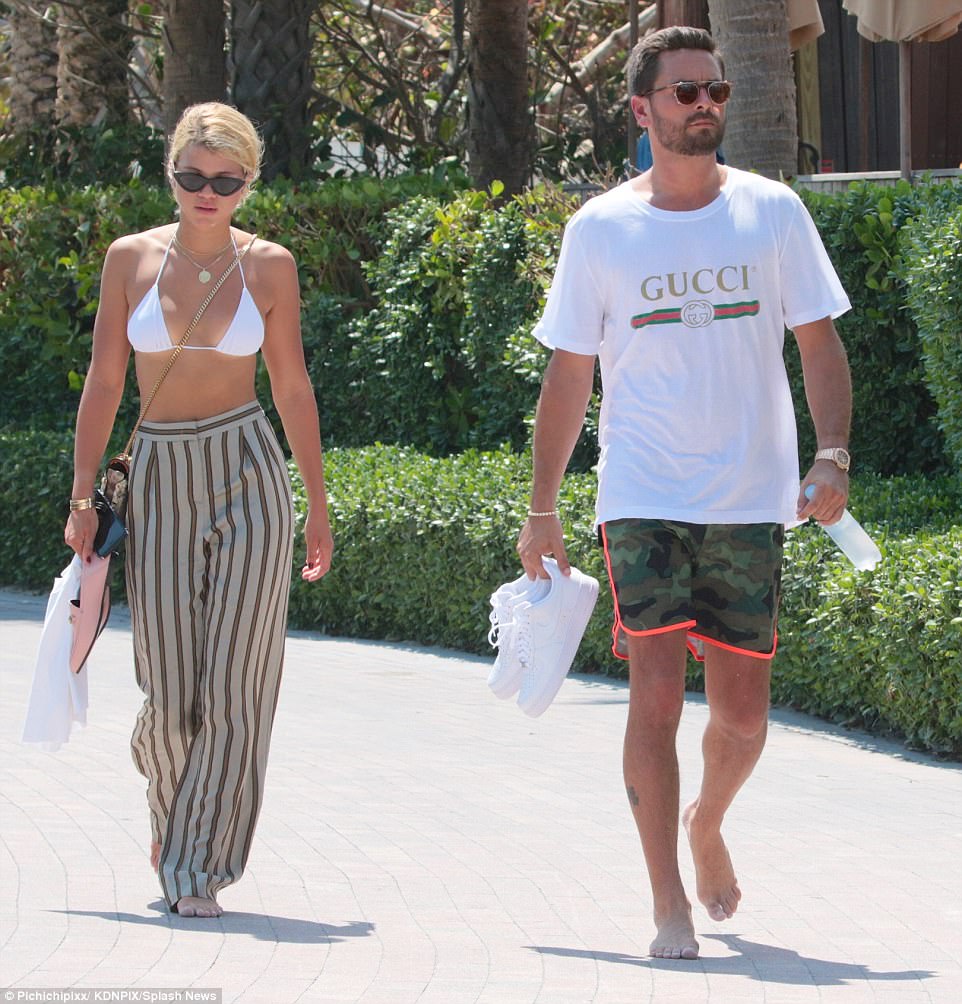 Another day another vacay: The father-of-three wore a Gucci t-shirt with some camouflage shorts and carried some sparkling white sneakers 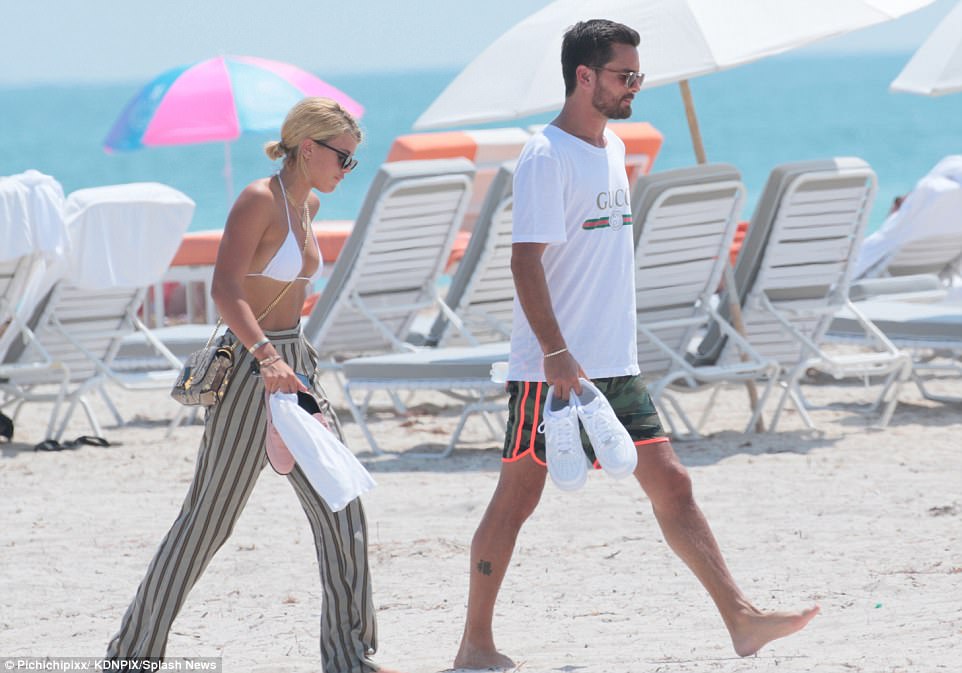 ‘Scott and Sofia are inseparable. They are spending every day together. Sofia seems smitten,’  a source dished to People last week

And now the former besties have unfollowed each other on Instagram.

The relationship between the Keeping Up with the Kardashians star and Lionel Richie’s teenage daughter is apparently all but confirmed.

According to an US Magazine source: ‘Things became official over the past week while they were in New York City together’

But not everyone is happy for Disick and Richie.

An unnamed source told UsWeekly of the relationship: ‘It’s so weird. Not just the age difference, but mostly the fact that Sofia had been a family friend for years, and was close to Kendall and Kylie [Jenner].’ 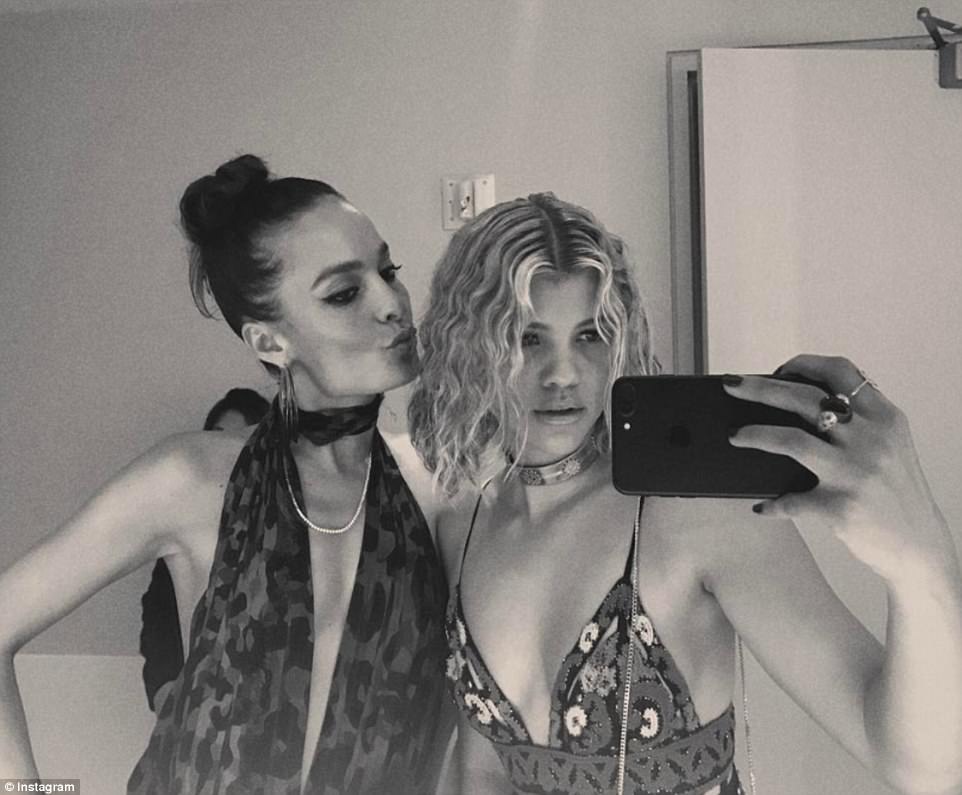 Happier times: According to US Magazine Scott’s ex-girlfriend Chloe Bartoli, 27, and Richie ‘were like sisters’ until Disick turned his attention to Richie 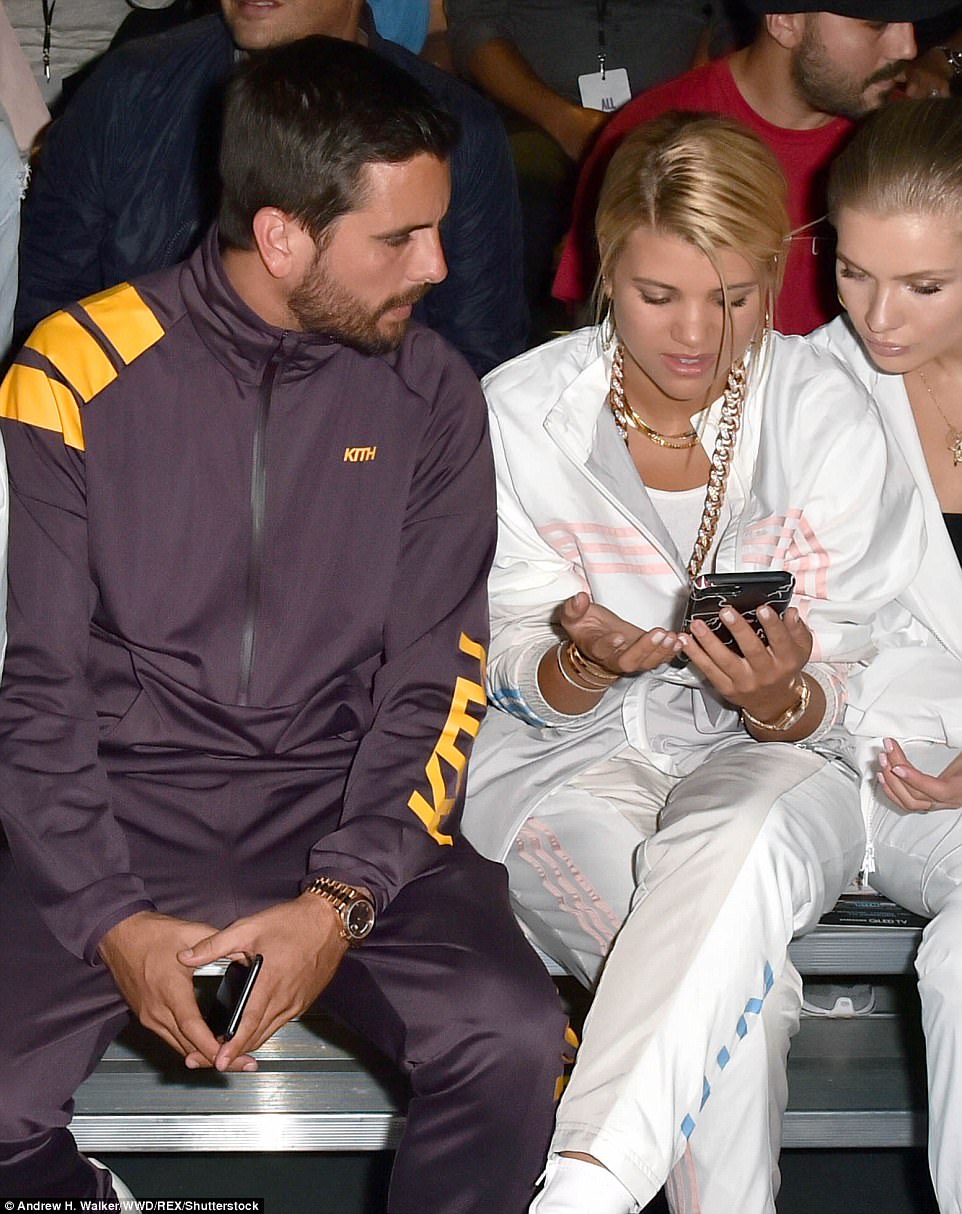