Bushfire survivors have accused Scott Morrison and NSW Premier Gladys Berejiklian of not showing ‘real emotion’ during their moving visit to a packed evacuation centre.

The Prime Minister was photographed comforting elderly residents inside Club Taree on the NSW mid north coast on Sunday, including Owen Whalan, 85, who broke down in tears and said he had lost everything in the bushfires.

Images of the pair embracing earned Mr Morrison plaudits for ‘caring’ – but some survivors claimed his emotion wasn’t as real as it appeared on camera.

But a source close to the Prime Minister said Mr Morrison was genuinely moved and  ‘there was nothing fake about the visit’.

Scott Morrison has been accused of not showing ‘real emotion’ while talking with broken bushfire survivors (Pictured: Owen Whalan, 85, who lost his Koorainghat property) 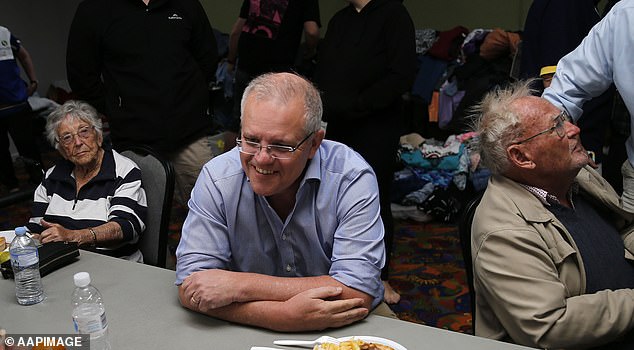 One young man who lost his home said Mr Morrison went straight to a table of elderly residents and kept repeating ‘wow, that’s tragic’ without ‘any real compassion’ 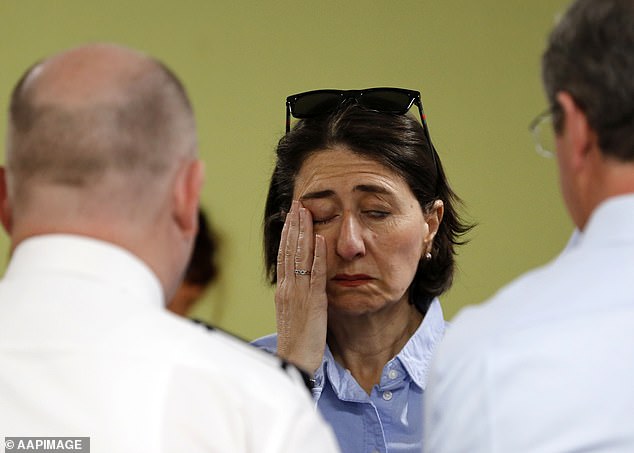 Mr Morrison’s ability to connect with people is considered one of his greatest political strengths.

Byron Hall, 21, who lost his home in Old Bar to a blaze over the weekend and sought refuge in the centre, claims Mr Morrison made a beeline straight to one table full of elderly residents, who were eating their lunch, with media crews following him.

‘He didn’t really talk to anyone else. He went straight to them, interrupted their lunch and just kept repeating ‘oh how tragic’, and ‘wow, that’s tragic’ as they told him their stories of losing their homes,’ Mr Hall told Daily Mail Australia.

‘There wasn’t any real emotion or compassion.’

He claimed younger victims in the evacuation centre were ignored as the show put on show for waiting media crews and were then out the door in ’20 minutes’.

NSW Premier Gladys Berejiklian also attended the centre, which is housing 900 people who fled their homes after fires ravaged communities on the mid-north coast, including Old Bar, Wallabi Point, Rainbow Flat, Manning River and those who couldn’t get home to Forster-Tuncurry.

There are 64 fires burning in NSW, 40 of which are uncontained.

Authorities are predicting ‘catastrophic’ fire conditions on Tuesday – the highest  possible bushfire rating – for Sydney, Illawarra and Hunter, the Blue Mountains and the Central Coast.

‘Berejiklian was just following him around. All I can say is I’m glad they’re gone, they were useless,’ said Mr Hall. 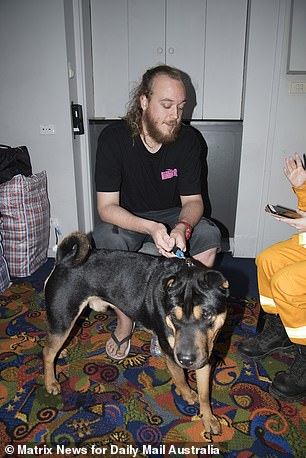 Byron Hall, 21, lost his home and claims he was brushed by the PM inside the Taree evacuation centre

This sentiment was echoed by club manager Morgan Stewart, 50, who said the Mr Morrison just made the shelter busier.

‘I know it’s good that he is bringing national attention to us and our emergency, but it completely clogged the place up.

‘He arrived pretty incognito, but then the entire media circus followed. We had buses and everything, this place was full. But most seemed to leave when he did.’

However, most reacted positively to the Prime Minister’s visit – with hundreds praising him on social media for the compassion he showed.

Many said a moving photo of him with 85-year-old Owen Whalan brought tears to their eyes.

A source close to the Prime Minister said: ‘There was nothing fake about the visit. You can see from the footage how emotional the PM was.

‘There are always going to be disgruntled opponents, who use any excuse to have a go at him.’

A spokesman for the Premier was contacted for comment. 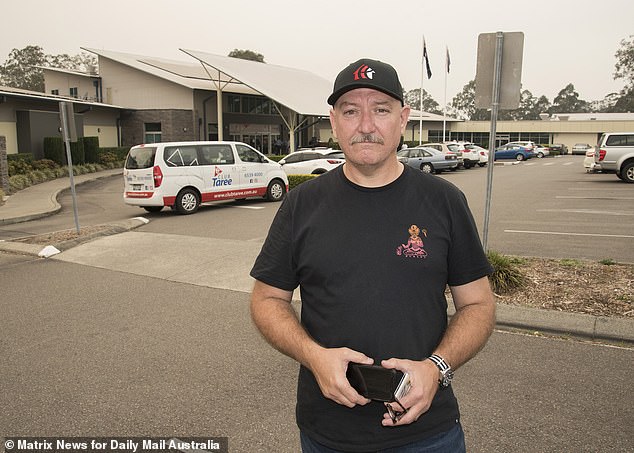 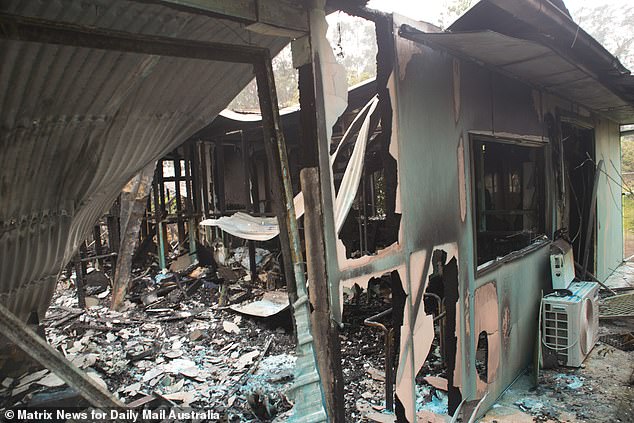 The Taree evacuation centre has been run by Mr Stewart since Thursday.

He hasn’t been able to return to his own home in Wallabi to get supplies or check on his property.

He knows his home survived, but some of his neighbours weren’t so lucky.

‘Two doors down is gone,’ he said.

Mr Hall, who turns 22 tomorrow, found out he’d lost his home on the television in the evacuation centre.

The band photographer said his girlfriend’s dad saw what looked to be their granny flat on the news – up in flames – and then saw the house next door.

‘That’s when the penny dropped. Not long after, some of the people running the centre came in and said our property number on Old Bar Road and asked to speak with us, and that’s when he knew.’ 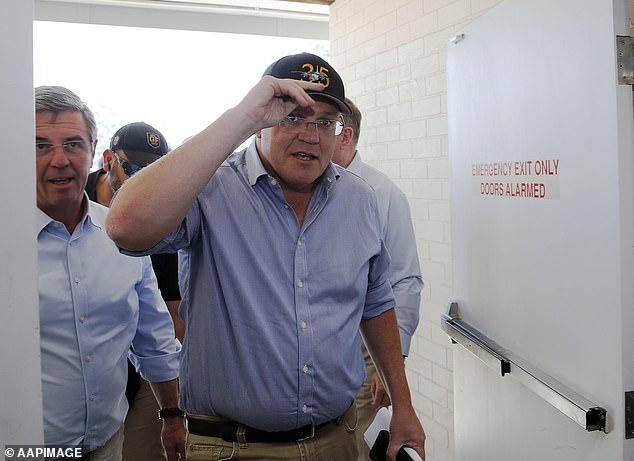 Before fleeing, he made a last minute decision to take one of his puppies, a Sharpei named Morty, with him, after initially planning to leave him in the house to keep him safe.

Of six other dogs that were on the property, two are still unaccounted for.

The fire and rescue commander on the scene of the blaze told Daily Mail Australia that overgrown grass contributed to the fire.

But Mr Hall said the government did not let him back burn.

‘They kept telling us it wasn’t safe. It’s the government, they didn’t allow it.

‘Even when they were here yesterday, they were saying they were doing all they can while cameras were on them.’

During Mr Morrison’s visit, he warned the worst is yet to come as a ‘catastrophic’ danger warning is in place for Tuesday.

‘We’re not out of this yet,’ Mr Morrison told reporters at the evacuation centre.

‘There is a long way to go and Tuesday is looking more difficult.’ 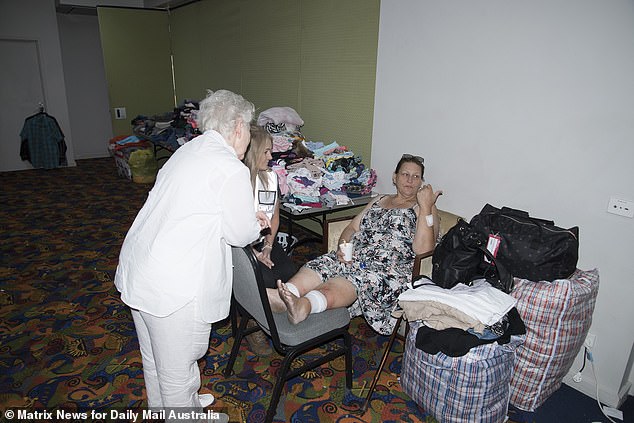