By Richard Shears In Australia For The Daily Mail

Britain was urged to be on its guard yesterday after Australia came under attack from a wave of foreign cyber hackers.

The attack, suspected to be by China, targeted everything from government to schools and has seen industry, health agencies and utility companies fending off attempts to breach networks.

Scott Morrison, the Australian premier, did not name the superpower as the culprit yesterday but said the ‘cyber bombs’ were coming from a ‘sophisticated state-based actor’. He added: ‘There are not a large number of state-based actors that can engage in this type of activity.’

Security experts in Australia said they were certain China was responsible after Canberra pushed for an international inquiry into the origins of the coronavirus outbreak. Mr Morrison has flagged up his concerns to the ‘Five Eyes’ intelligence alliance with Britain, the US, Canada and New Zealand.

Australian Prime Minister, Scott Morrison (pictured), said that ‘cyber bombs’ came from a ‘sophisticated state-based actor’ but did not name the superpower culprit when speaking yesterday

In an unusual step, he went on television yesterday to say the country was under digital attack in a ‘malicious’ and ‘state-based’ assault. Hackers were targeting organisations across a range of sectors, he said, ‘including all levels of government, industry, political organisations, education, health, essential service providers and operators of other critical infrastructure’.

As Mr Morrison pushes for a Covid inquiry, China has warned tourists against travelling to Australia, alleging racism and violence prompted by the virus.

Peter Jennings, of the Australian Strategic Policy Institute think-tank, said he was ‘absolutely certain’ the attack was coordinated by Beijing.

In response, Beijing’s foreign affairs spokesman Zhao Lijian claimed China was a ‘staunch upholder of cyber security’ and the claims were ‘baseless and nonsense’.

In the current attacks, hackers steal sensitive information by sending scam emails to trick recipients into revealing their details. One security official told the Australian Broadcasting Corporation the malicious cyber campaign was provoked by the country banning Huawei from building the 5G infrastructure – but that calls for a coronavirus inquiry had made things worse. 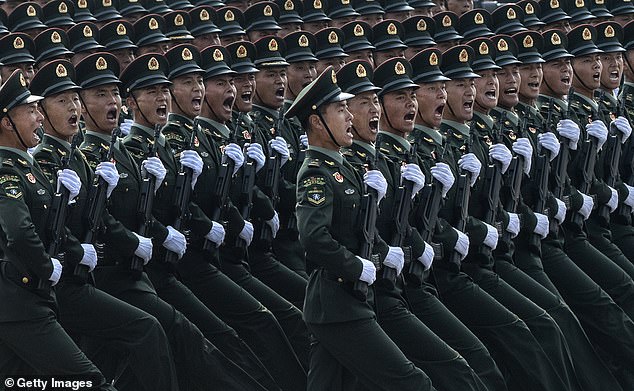