Scott Parker’s preparation for becoming a manager has been perfect

If the secret of moving smoothly from a playing career into coaching is being able to pick the best bits and avoid the worst from managers you worked with, then it explains why Scott Parker has taken smoothly to such a brutal business.

Parker played for more than 20 managers if you include the caretakers as he savoured the thrill of the Champions League, the gloom of relegation and the whirl of international football.

Among his five England bosses were Sven Goran Eriksson who ‘seemed very chilled’, Stuart Pearce, who made him captain, and Fabio Capello who was ‘very, very scary’ and ran the show ‘like a dictatorship’. 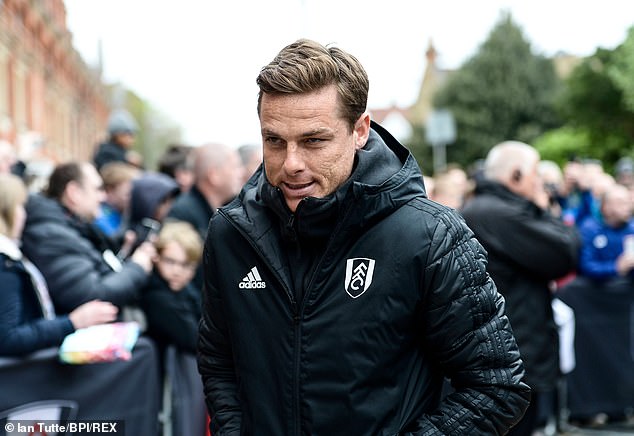 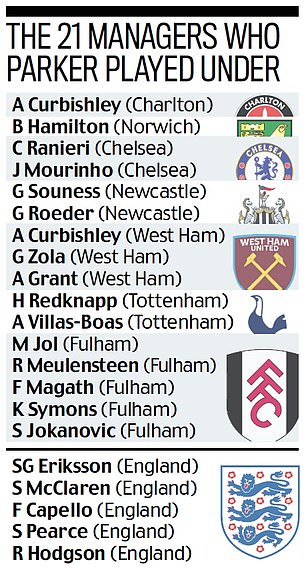 Parker marvelled at the force of personality when Jose Mourinho first swept into Chelsea, the ‘tough love’ of Graeme Souness at Newcastle and the man-management charms of Harry Redknapp at Tottenham where he first started to think like a coach.

‘At the back end of my career I’d put myself in the situations you see in changing rooms,’ said Parker. ‘Where there is conflict, arguments, fights, players refusing this and that, players kicking off. I was constantly working out how I would have coped with that.

‘On the field, I was probably coaching more, helping players and doing my coaching badges.

‘John McDermott was at Spurs and he probably pushed me into it, and there was the fear of being 31 and not knowing what I was going to do next.’

Parker has been a Premier League manager for little more than two months, since Claudio Ranieri was sacked and he was summoned from the backroom to lead Fulham to the end of this dismal campaign.

In terms of full-time experience, there was a year coaching Spurs’ Under 18s and seven months working with Slavisa Jokanovic and Ranieri… but now there is sense of destiny at play.

He could not save Fulham from relegation — three of his first five games were against top six teams — but as he goes to Wolves on Saturday on the back of three wins, making positive noises about a swift return to the Premier League, the club seems at ease with itself again.

‘I wasn’t expecting to be in this position,’ said Parker. ‘But have I planned and prepared over the last six or seven years so that when I was in this position I could be successful? Yes, I believe I have. And I’m glad I’ve done that. I did it because when the time came, be it now or in a year’s time sitting in an interview trying to get a job to be a manager, I didn’t want to sink. 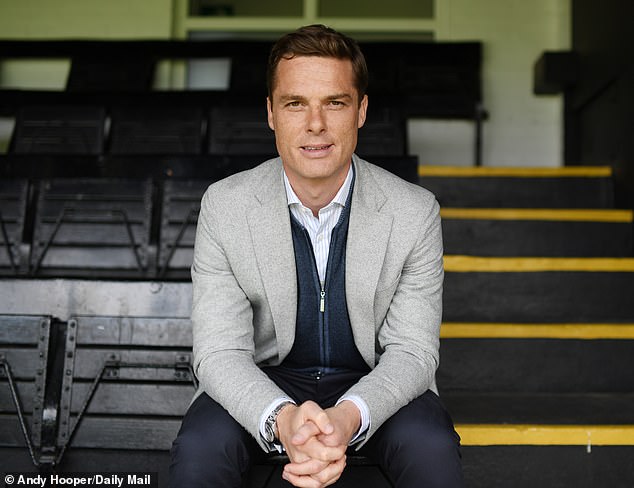 ‘Claudio left and the owners said, it’s over to you, take a deep breath and go. Then the challenge starts. Parts of football are not nice and don’t sit right. Claudio was losing his job and 15 minutes later you’re out there trying to prepare a team.

Parker reflects with appreciation on his own football education. He was a child prodigy, paid £600 to star as a keepy-up kid in a McDonald’s advert ahead of the World Cup in 1994. His father Mick was tough on him after games, but this was nothing compared to Keith Blunt, his coach for two years at the FA’s School of Excellence in Lilleshall.

‘Keith was possibly the hardest man for six months of my life and made it hell,’ said Parker. ‘I would walk off the training field crying. He was horrible to me. Bless him, he’s passed away now, but it was possibly the best grounding.

‘It gave me an understanding and a self-perception, a way to understand how I looked to other people. Keith probably took a judgment on me. I was the McDonald’s kid and he made me more self-aware of that fact.

‘I don’t know whether you’d have that now. It’s all very nice and clean. And that’s not a good thing. That’s society. I’ve got four boys. They’re different animals to what I was like.

‘Everything is instant. The click of a button. That’s my worry. There’s no realism in the world at times. Certainly as footballers.

‘When my boy has lost 4-0 on a Sunday morning, I’m the Dad in the car saying: “OK mate, don’t worry, we can do this or do that”. When I got in the car after losing a game I sat in the backseat and had to keep my mouth closed. 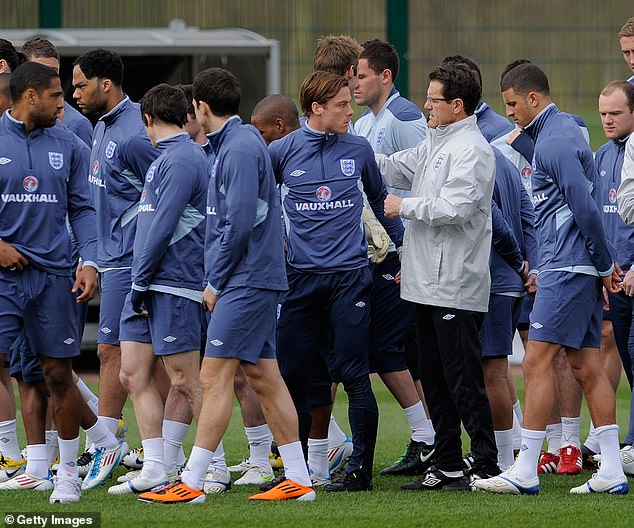 Among England bosses, Fabio Capello was ‘very, very scary’ and ran things ‘like a dictatorship’

‘People might think the way my father was acting was disgraceful but ultimately I am so appreciative because that made me what I am today. I often ask myself those questions. “Am I doing right by them? How can I instil in them what I had in me? Was it down to the people close to me? Was it the lack of opportunity?”

‘I do think in life at this particular moment we’ve lost that discipline. And I don’t think it’s a good thing when you’re trying to develop hard, elite sportsmen. That’s a constant challenge for a manager.’

Parker recalled how, when he broke into the Charlton first team manager Alan Curbishley was assured a captive audience but the game is evolving fast.

‘When he addressed the changing room, he knew 28 from a squad of 30 were listening to him. When you’re in front of 30 players now you’re often looking and thinking, “he’s not understood me” or “I’ll have to pull him later” or “I’ve got to communicate it to him in a different way”.

‘Everyone has a motivation and if it’s money, I don’t think that’s wrong. Not everyone wants to win the Premier League so badly that every Saturday at three o’clock they go out and give everything.

‘I understand that. Players earn a lot of money. He’s got a four-year contract, what’s his motivation? Is it winning the Champions League? Is it having four days off to be with his family? Whatever it might be you need to tap into that. And 20 years ago it wasn’t like that.’

Some things, however, don’t change. Relegation hurts as it always did whether that comes from a sense of responsibility, lost status and injured pride or financial setback. 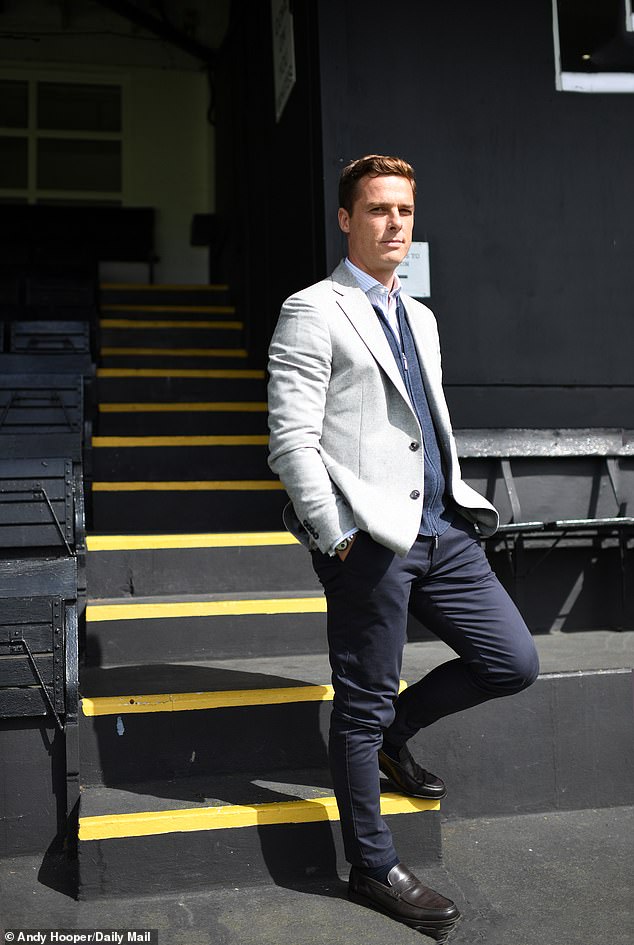 ‘Definitely it does,’ said Parker. ‘There’s a squad of players here who are gutted with the way the season has gone. It has been pretty poor to be honest.’ He talks of the ‘haze’ of new signings, new league and new manager with a new philosophy, all enhanced when the fear of relegation takes a grip.

‘All of a sudden it’s all a bit blurry,’ said Parker. ‘I experienced it when I was relegated with West Ham. There have been mistakes and we’ll sit down at the end and ask where it went wrong, but the way football works, all the changes have probably emphasised it.’

His eight games at the helm have helped to restore clarity and Fulham’s identity as a team playing adventurous football. Fans have reconnected and are positive about the future. There have been talks planning pre-season, transfer targets… and whether he will take the job on a permanent basis.

‘It is probably best that is ironed out one way or another in the next few days,’ said Parker.

‘Two or three weeks ago I would have said I need to focus solely on the team because we were in a bit of a bad way. We needed to galvanise and get some results.

‘Do I want to be manager of Fulham Football Club? Yes, I do.’